Check out two new features of Robo's World 3 including the arcade-esque multikill system and the robust level-up system!

Posted by BluishGreenPro on Jun 8th, 2009 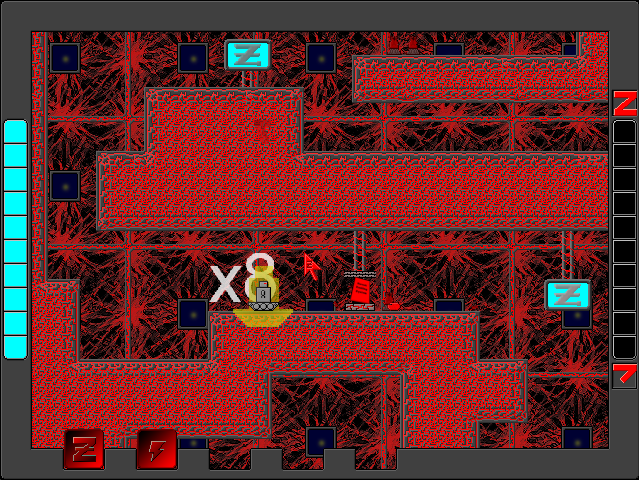 I have stated before that I want to include as many elements as possible into Robo's World 3, (variety is the spice of life) and today I am showing off/ explaining the design of the interface as it is.
I had mentioned before that there was point accumulation that would rank up Robo, but now you can see how it works. When you kill enemies, you are awarded point which are displayed on the right on the screen in a bar that gradually fills up. When this bar fills completely, you rank up. For each rank you increase, an ability is unlocked that is displayed at the bottom as an icon. At this current time I am not ready to say what all of the abilities are, but I will say that currently they are accesed via clicking on them with the mouse and that after they ware off they will have a cooldown time.
Now for multikills! It's a pretty basic system, kill more then one enemy and a huge number pops up on screen. Also, the more kills you can get, the more points you get for killing an enemy on a one to one ration. By chaining large amount of kills, you can get tons of points. Whats fun about this is that the amount of score multiplyers you can get is unlimited, so if you get ten kills, you get ten times the point value of killing that enemy.
Note that in this photo I have ranked up to the second level, going on the third, which right now is still very easy to do as I have to test out the abilities. In the final game, you might not even get to the final rank unless you get a serious ammount of points. [And this will be a long game! (hopefully.)]
That said, there's a lot of fun in killing what with the effects and explosions, and there will be plenty of enemies to kill!
Look forward to these features in an upcoming demo!