One of the problems with modding a game that’s in ongoing development is that occasionally the developers are going to pull a fast one and change something fundamental about the game that makes your mod redundant. What with the new animations of the RC builds a good amount of mods now don’t quite work with the Project Zomboid public test releases.

It’s a necessary evil, and you’ll hopefully agree that the new engine is considerably more fluid and pretty, but it’s one that does come at a cost, so please, have a seat, get yourself a cup of tea, and join me as I wander the halls of the modding forums nodding solemnly at the mods that I deeply desire will one day receive a dose of cosmetic surgery. If you fancy though, of course, you could always boot up an older build and reminisce a little.

There's mods like zombaxx’s Crossbow Mod for instance, which does exactly what you might think. Just plop it into your Zomboid folder and you can craft yourself a lovely long-distance zombie-skewerer, silent as a whisper in the night and at least three times as deadly. 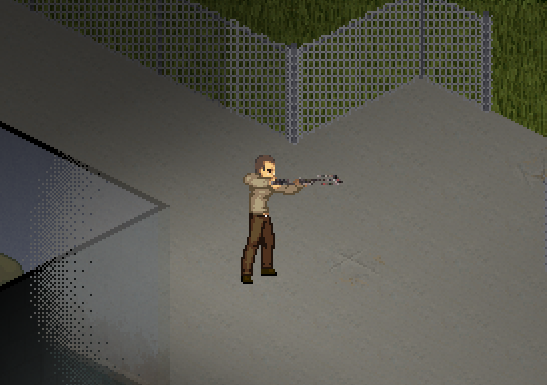 You’ll need a whole load of planks, a handful of nails, a hammer, a saw, a knife and a pillow (for feathers), but after an hour or so in the workshop (an entirely metaphorical hour) you’ll have the crossbow up and running. While you can’t quite go as far as retrieving arrows from the corpses of the twice-fallen, that is on the cards for a future update.

Or there’s Stormy, a sprite virtuoso who’s come up with outfits for old baldspot that are really quite something. There’s a Sherrif Outfit, Tracksuit and Trainers, the old army veteran Combat Trousers/Jungle Boots combo, and even a Shirt and Tie Combo that I featured in the last column. All of these aren’t going to make the transition to the new version of the game, which is a real shame.

That’s not to say that the modding scene is going to fall apart just because of a few changes, however. The new engine should make things easier, rather than harder, because it just requires reskinning rather than modelling every little sprite animation by hand. And we’ve already seen some great new mods pop up that take full advantage of that, like Spaz’s Spiked Bat and Poolcue, which add a little more variety to your arsenal.

It’s also important to realise that this only affects those mods which focused on the player character himself, and the weapons and tools he could use. There’s still a great deal that should work fine with the new version of the game, right down to being installed in the exact same way; just dropping the files in the appropriate folders as specified by the mod.

Mods like Duck and Cover, by Ontogenesis, decides that the constant threat of having your brains nibbled on by Hannibal Lecter’s spiritual if brainless children is clearly not enough of a danger, and so throws the odd air strike your way.

They’re completely randomised, meaning you might have just a few hours between the air-raid sirens, or even a couple of days. It’s a constant threat, and one you can really do nothing about. But when those horns start blaring, you have to rush indoors just so you don’t have your head blown off. It creates constant tension, as well as lovely little emergent stories where you might rush into the nearest building only to find it’s full of a whole pack of walkers, leaving you furiously defending yourself while the bombs provide an apocalyptic beat to the proceedings.

So lets give 1.5 a nice round of applause, because we'll hopefully soon be taking it out behind the bike sheds and putting two in its little head, to make sure it doesn’t come back as a zombie and eat all our brains out.

Modders and bug-reporters are the only people that is doing something for this game, they are improving it as much as they can, but you developers?
More than a year without a decent update... but yeah... you all have time for sitting your *** writting stupid things in twitter. Remember that we gave you our money, and as clients we expect a finished product or at least, a raw product that will improve.
Next time I will give my money to modders, they deserve it more than you.

Be fair man. Their other updates talk about plenty of improvements they are making.

Okay I'm getting sick of these guys too. They have a good game concept. The improvements they talk about sound great. But the actually getting of stuff done and then getting it out to us their fans? It's freakin pathetic. It will be nice if I actually get to play a more polished version of PZ some day but I think I'll make it a point to avoid any other products these guys put out. At least until I see that it's good and finished before hand. I sure wouldn't be supporting them during development. They've shown that to be a mistake.

Guys,come on there doing there best even if its been......

still its a good game and if you where real fans you would wait.

Sometimes its not a case of being real fans its a case of urging the developers on they have a very good product we all just want to them to not slow down developing it. At this point in time modders should not be doing a better job developing than the dev team or they should think about hiring the modders if thats the case.

Funny, i posted something similar to this and kids jumped down my throat.

I don't know if you noticed yet, but he was down-voted into oblivion.

"As clients we expect a finished product or at least, a raw product that will imporve"
Expect all you like, what you paid for in a situation such as this was the chance to play the game in it's current state, with the developers having all power to say, stop developement all together or, god forbid they should wait long enough til they feel they have a well rounded game, take as long as they like in fully releasing the game. The unfinished client is there for you to try out, with all the newest additions included, if you took the time to go to their forums.

I think it's a great thing to see indi developers supporting other indi/mod developers.

PZ is already a great game, and while I can understand the impatience of some people, I can also understand the decision made by the developers to support other aspiring developers. It is a rarity these days, and I would love to see more of it.

Obviously there is work behind the scenes that the developers aren't showing to people just yet, so I say remain patient and wait until RC3.

Why is it that everything they post now, all I see in the comments is people complaining? The way I see it, I put money into what was an early tech demo / idea showcase, not a finished game. Not even a promise of a finished game within a couple years.

I just checked, and PZ is currently $8, I realize that could be a good bit of money for some people but, really? There IS a demo available, you obviously liked the game so why pressure the developers to release a crappy, half-complete, half-broken version of the game you decided to fund? It's not like they disappeared with your money, they're putting out updates every once in a while with information of what is going on.

(Let it be known, I mean no insult to anyone specifically. Just want to voice my opinion on the matter.)

While I agree that any buyer knew it was an unfinished product, the fact that they've had a lot of late updates is a bit offputting. I appreciate their news updates, but theres really only so much waiting I can do. Promising something and actually getting it done in a reasonable frame of time are two different matters, and it seems they've been leaning a lot more towards the former. I anticipate the next update, but im starting to lose hope it will get here any time soon.

There are two sides to it - they're an indie developer company that is building the entire source code from the ground up themselves, and they are quite ambitious with what they want to achieve with the game. It's going to take a long time for them to get the game working properly - especially since they are accounting for lower end PCs, and are restructuring the way the game works now. They've also said they can't release the game as-is right now because it would essentially be unplayable (like if you took the engine out of a car and tried to get someone to drive it).

That said, it does appear they're skipping alpha stage completely and going for a point in production where it'd be Beta... I'd suggest just checking on it once every other week and seeing what progress they've made. :) If you've funded anything on Kickstarter recently, you'll be expecting a couple of years of waiting time: just treat this the same. ;D

At least it made me laugh.
What are you in the end ? Paying for it don't mean you have all right on it ! You knew what "WIP" means when you bought it.
Seriously, you didn't pay 50 bucks for it did you ? They trying to make the game better than it has never been before and you not happy geez...
I don't think you whole life depends on pz going out or not.

Release some of the stuff you show or let modders do some stuff for the game since you guys can't do ****.

when is the project zomboid getting a update on desura

Why does it feel like ive paid a bunch of teenagers to finish their homework, only to find they havent done it, just rather spent the money on something else and sat around for the rest of the day doing bugger-all?

Yes, its a WIP - but I expect SOME progress at some point. All im seeing is videos of young men talking big, trying to be funny and light-hearted whilst im stuck playing a WIP with so many bugs they havent even bothered to fix.

Look, its good to dream guys, and yeah, think BIG, but dont forget you're using our money to do it with. You're not Rock* or Blizzard. You cant take your time and expect us all to think its fine and dandy. You've taken our money, drawn us into this developement and now you have to give us something in return.

not trying to get drawn into this war here,but did anyone else notice the description of the $8 version?''expect frequent updates as you fight for survival against the zombie horde.'' just pointing that one out

Honestly, thank you guys for posting your complains here. At least you did some good saving me the $.

Hope I'm not the only one to read players' opinions before getting the game.

hey how do you get to diffrent maps than one tiny map?