In this second instalment of the Airships modding guide, I'll give you an explanation of how mods can override existing game functionality, and walk you through creating a simple mod that adds a new weapon: a really big cannon.

In this second instalment of the Airships modding guide, I'll give you an explanation of how mods can override existing game functionality, and walk you through creating a simple mod that adds a new weapon: a really big cannon.

Note that this guide assumes you're read part one.

How mods workAs a Java program, Airships is composed of class files that are loaded in when needed. By default, these classes reside in Airships.jar (which is visible in the main directory on Windows and Linux, and inside the Airships app bundle on Mac). A .jar file is really just a ZIP file which contains the class files. Java classes are arranged hierarchically. For example, the game's main menu is defined by the class com.zarkonnen.airships.MainMenu. Inside the Jar file, its class file is hence located at com/zarkonnen/airships/MainMenu.class.

Modding is possible because Airships has been set to prefer loading in replacement class files from the mods directory. So if there is a mods/com/zarkonnen/airships/MainMenu.class file, that file will be used instead of the original. This way, you can override existing functionality.

An Airships mod hence usually consists of a com folder that can be dropped into the mods folder to install it. Note that you should only distribute the class files that you have changed, rather than a complete, patched copy of the game! (Because the latter is technically speaking redistributing the game for free...)

A trivial modLet's try this out with the most trivial mod imaginable. Let's change the word "AIRSHIPS" in the main menu to "SHIPS OF THE AIR". To do so, open the MainMenu.java file in NetBeans:

Search for the all-caps word AIRSHIPS. In version 5.2, it's on line 514, but this will likely change in future versions.

Replace it with SHIPS OF THE AIR. The [333333] in front of it is a syntax used by the text rendering system, colouring the text a dark grey. You can ignore it. Or change it to [ff55ff] for a lurid purple.

Now save MainMenu.java and run the project.

Of course, this isn't a mod yet. We've just modified our local copy of the game, but we want other people to enjoy our excitingly renamed version. To do this, we need to pick out the modified MainMenu.class file and put it into a normal copy of Airships. To do so, go into the build/classes folder in your project. Within that, in src/com/zarkonnen/airships, you will find... a whole bunch of classes called MainMenu! Apart from MainMenu.class, there's also MainMenu$1.class through MainMenu$31.class!

These additional files are for anonymous inner classes - little classes inside MainMenu that do things like listening for events. Take MainMenu.class and all of its little extra classes, and put them into a normal copy of Airships 5.2, into mods/com/zarkonnen/airships/.

Then launch your now-modded normal copy of Airships, and you should see the same change in the title.
The Imperial Cannon 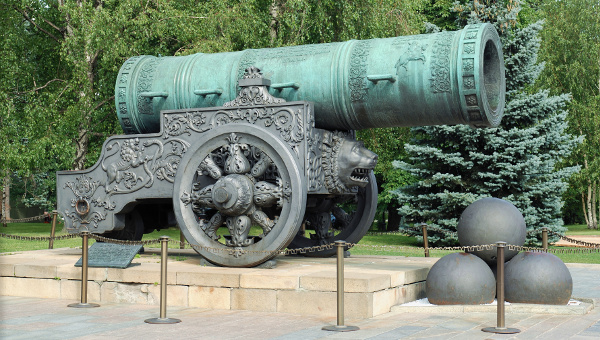 So that's how you create a mod, but this last one was hardly interesting. Let's create something fun: a mod that adds a giant cannon module. This weapon, inspired by the ludicrous Tsar Cannon, will be huge, heavy, expensive, slow-firing and not particularly accurate. But when it does hit, it is likely to tear smaller ships in half.

Let's get started. To add a new weapon module, we need to add a new entry to the ModuleType enum, where all the modules are defined. There's quite a lot of things that a new weapon module needs, but we can start out by just duplicating the existing entry for a heavy cannon and working from there. 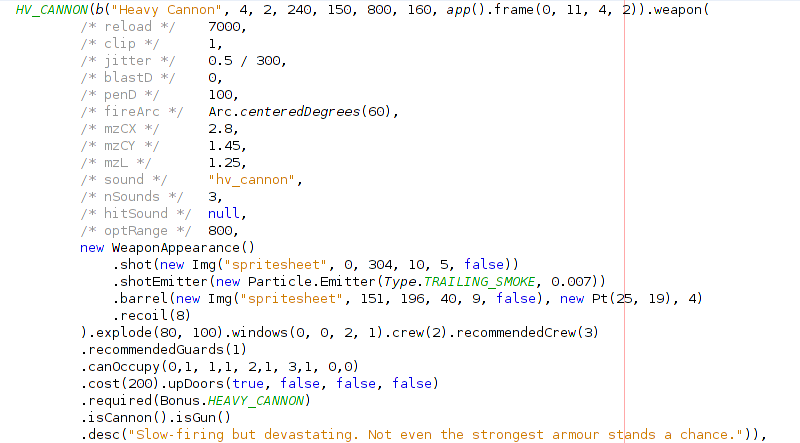 This is the definition for a heavy cannon. Let me walk through what each bit means.

Then we get to the weapon-specific information:

Then there's some details about what the weapon looks like:

That's everything! All this information put together completely defines the heavy cannon module. Now we can start changing things around for our superheavy cannon.

But first, let's draw the necessary art. To do this, have a look at the spritesheet.png file found in src/com/zarkonnen/airships/images. To make things easier, I suggest creating a temporary layer underneath with a checkerboard 16x16 pixel pattern, which will let you see where the tile boundaries are.

So the heavy cannon is a 4x2 module with a barrel length of 40px. For our crazy gun, we want to scale this up considerably, so let's make it a 6x2 module. First, let's find some empty space on the sprite sheet, say in the top row to the right, just after the module sprite for the suspendium cannon.

And in fact, let's just copy that module sprite, get rid of the sciency panel, and make it wider by one tile. Our giant cannon needs to be anchored rather thoroughly, so we add a metal mount for it, too:

Next, let's draw the barrel, making it the kind of greenish copper colour of the Tsar Cannon:

For ease of alignment, I've put it right below the module sprite, in the correct horizontal position.

As with the modified .class files, we can simply put our modified spritesheet.png into the correct location to override the original. For now, just replace the one in the game source.

Now we can get started with creating the entry for this new weapon, which we shall dub the "Imperial Cannon", in reference to its inspiration. First, simply duplicate the whole entry for HEAVY_CANNON and rename it IMPERIAL_CANNON. THen go over each of the values we looked at before and modify them for our needs. 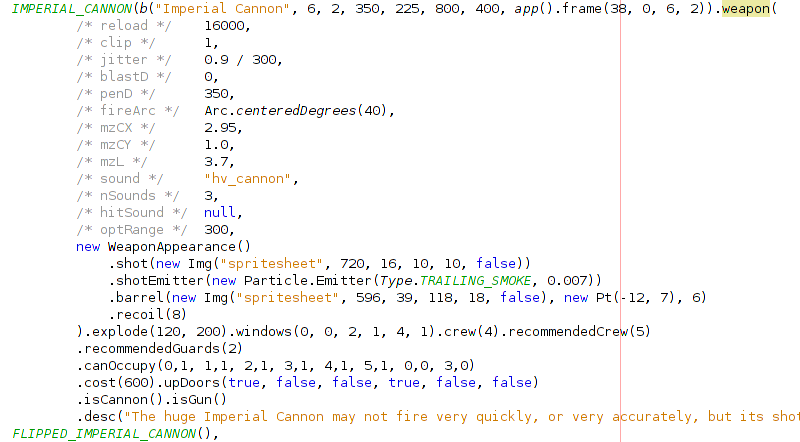 That's it! We've added a new type of weapon to the game, and it's time to try it out. Start up Airships and enter the Ship Editor!

And there it is! So huge that it breaks the layout of the editor. Oh well. Let's try it out on a modified HMS Unmatched:

Let's try it out on this unsuspecting tower:

And indeed, it proves pretty effective at tearing off whole bits:

Now we've got this working, what's left is packaging it up as a mod. To recap, we've touched two things: the ModuleType enum, and spritesheet.png. So the complete mod should consist of a com folder that contains the ModuleType.class files (again, there are several) and the spritesheet.png file, like so:

You can then drop that com folder into your normal version of Airships 5.2, and enjoy the new Imperial Cannon. At this point, you could zip up that com folder and make a post on the forums, announcing your new mod.

To wrap things up, here are some downloads that may be of use:

Now I'm aware that I've written a lot of words here, in an attempt to give a comprehensive account of what each bit of this mod does. Please let me know if there's something that needs better explaining, or something that's inconsistent. Also, let me know what other modding topics you'd like me to cover. By default, the next instalment is going to be more of an overview, a kind of guide showing you what's where. For now: experiment! How about making a light cannon instead, halfway between a rifle and a normal cannon? Or try adding a new type of armour.

See you on the forums!