Last week, I began discussing match tactics. This week, I'll be finishing it off!

Last week, I began discussing match tactics. This week, I'll be finishing it off!

Stay Back! Don't Get Trapped!

This tactic instructs your fighter to stay on the outside whenever possible. Of course, if his opponent is particularly good at cutting off the ring or working his way inside, the effectiveness of this tactic is reduced. However, if your fighter happens to be an excellent outfighter with good Footwork and Positioning, then this tactic will take advantage of those traits.

Fighting off the Ropes 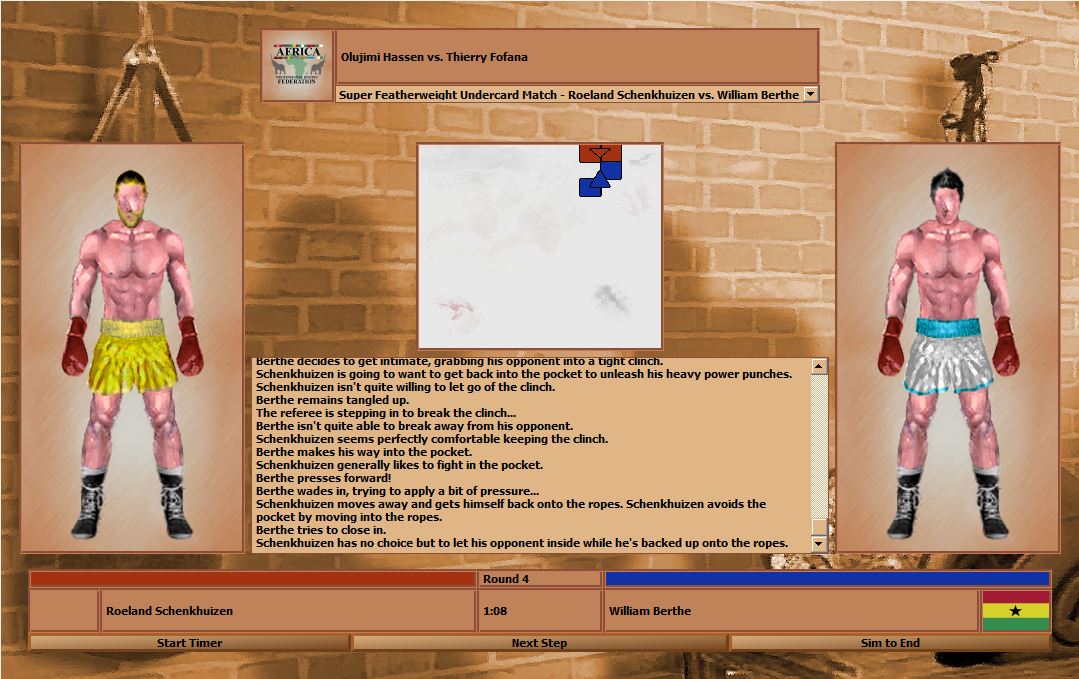 Before I go onto the next tactic, I need to digress a bit to talk about fighting off the ropes. Fighting on the ropes as the defender is usually not a good idea - when it happens, initiative is never re-calculated, so the defender never gets the chance to re-establish himself as the aggressor unless he performs a hard counter and circles off the ropes.

The defender is thus forced to stand there and simply react to whatever his opponent is doing. He also is unable to prevent the opponent from moving into whatever range - out, in, or clinch - he desires. There is, however, a match tactic that can mitigate these disadvantages.

This tactic makes it more likely that your fighter will back onto the ropes and remain on the defensive rather than attempting to turn the tables after a successful dodge or counter. It also adds a slightly increased chance of success for dodges, and a slight boost to damage to counters performed off the ropes.

Thus, the disadvantages of being backed onto the ropes are mitigated if your fighter's defensive abilities are superior enough to be able to counter or dodge the opponent's attacks reliably. This tactic is best used if your fighter is particularly good at making his opponent pay for his mistakes.

Cut Off The Ring!

Bob and Weave! Don't Get Hit!

This tactic instructs your fighter to attempt to dodge most incoming attacks. Since dodges both avoid all damage and inflict extra fatigue on your opponent, there are several instances in which employing this tactic might be useful. If your fighter has good defensive abilities and is taking heavy damage, it may be worth it to try and leverage his defensive skills to avoid any further damage by making him dodge more. Alternatively, using this tactic early in the fight may be useful for tiring out your opponent if he has poor Endurance and/or Recovery.

This tactic instructs your fighter to stand and trade blows as much as possible rather than trying anything fancy. Naturally, it's best used for Sluggers or fighters with good physical and offensive stats. It can, however, also be used if your fighter is losing and you need a knockout in order to win - might as well swing for the fences in that case! Note that damage is generally reduced when trading blows, so it's somewhat risky to do so.

Wait for an Opening!

If your fighter is good at countering or otherwise has superb Timing and defensive skills, you may want to make use of this tactic. When this is active, your fighter will be more inclined to attempt counter attacks rather than blocking, dodging, or throwing back. The same risks and rewards of countering apply here, so you should only do so if you notice your fighter is having an easy time countering his opponent's attacks.

Tie His Hands Up!

This instructs your fighter to attempt to clinch your opponent. It is best used when your fighter is struggling in the match, as it can give him a bit of time to recover in case he's been rocked by a particularly huge hit. It may also preserve a lead on points if your fighter has won the earlier rounds.

This concludes the discussion on match tactics. I hope this feature and the previous one helps shed light on the match engine in World Boxing Manager. Normally, this is the part where I ask you to vote for my game on Greenlight if you're interested, but it was Greenlit this week! I'll be working hard now to iron out any remaining bugs and figuring out to release the game on various storefronts! Thanks to all of you for your support!