Last week, I mentioned the use of match tactics to influence the fight. This week, I'll be discussing how some of them work.

Last week, I mentioned the use of match tactics to influence the fight. This week, I'll be discussing how some of them work. 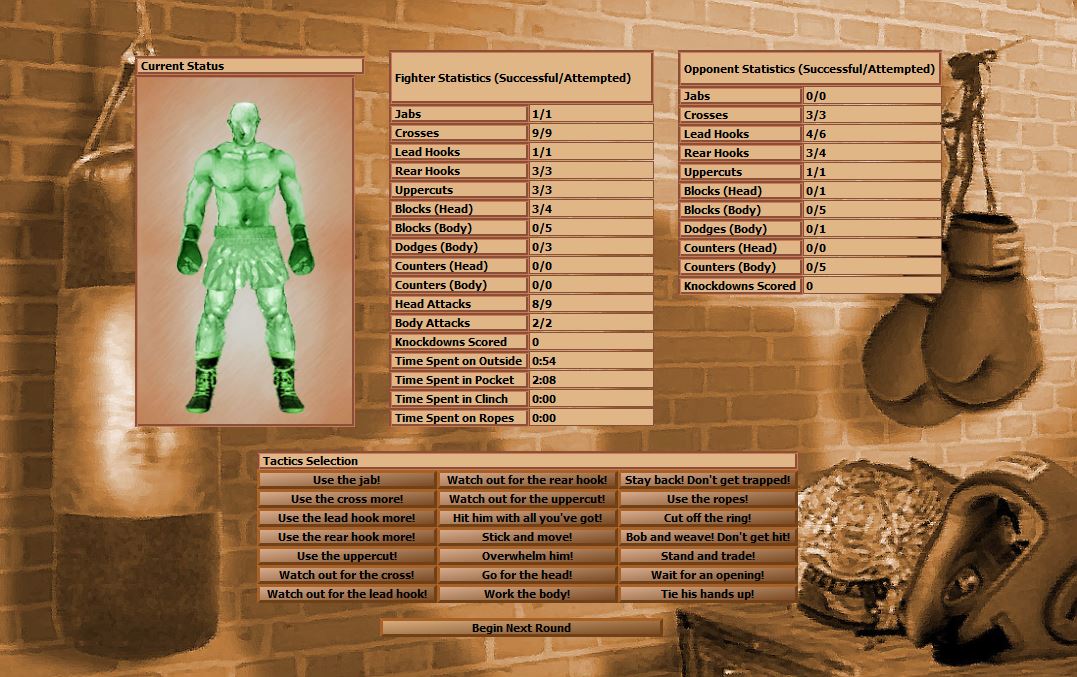 This set of tactics is rather straightforward - it simply prompts your fighter to use a certain type of punch more. It goes without saying that only one of the five can be active at the same time, since it wouldn't make much sense to use all punches more! But why bother telling your fighter to favour a certain punch?

The obvious reason is if your fighter is much better at throwing a certain type of punch than he is at throwing the others. If he has a devastating uppercut, it simply makes sense to throw it more often.

You, as the manager, do have to be somewhat careful of simply favouring a single punch, however. If your fighter possesses a low Adaptability rating, he may end up throwing the punch TOO often - which leaves him open to be countered more easily if the opponent begins to specifically look out for that punch.

Thus, if you do choose to make use of one of these tactics, you must ensure that your fighter has a decent Adaptability rating relative to his opponent's Adaptability, or at least make sure that your opponent simply has lousy Mental and/or Defensive stats in general (which would make it hard for him to dodge or counter your punches whether or not he can predict what kind of punches are being thrown).

Following on from the previous set of tactics, this set instructs your fighter to watch out for certain types of punches. With one of these active, the success rate of all defensive actions against the punch your fighter is watching out for are moderately increased, accompanied by a slight penalty against all other types of punches.

Generally, it's best to use one of these tactics when it's clear that your opponent is favouring a certain type of punch. Otherwise, you'll be penalizing your own fighter for no appreciable gain. Note that an opponent with high Adaptability is unlikely to heavily favour a single punch, so these tactics are best used against a fighter who has trouble adapting his style. It's also worth noting that there is no "Watch out for the jab!" tactic, as the jab is generally not dangerous enough to bother watching out for. 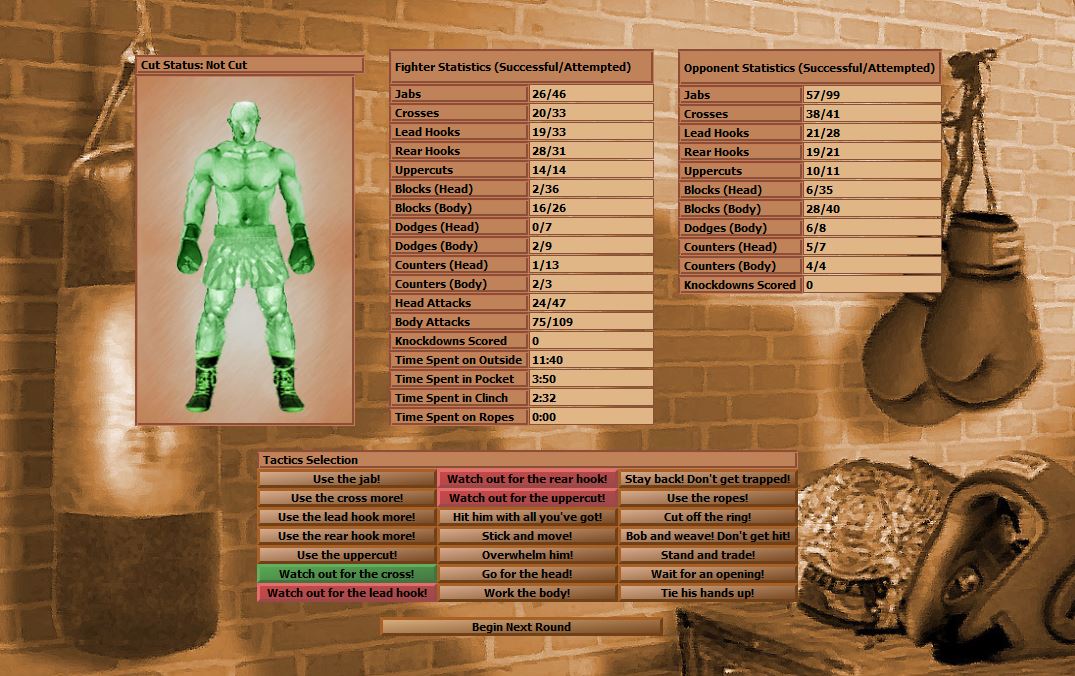 Hit Him With All You've Got!

This tactic is a stand-alone tactic that neither nullifies nor is nullified by any other tactic. All it really does it increase the likelihood of throwing haymakers. It does not offer any bonuses to success rate or power - it merely instructs your fighter to throw them more frequently. It is best used either against an opponent on the verge of being knocked out, against an opponent with poor defensive abilities, or against an opponent who doesn't seem to be all that good at taking damage.

This tactic instructs your fighter to throw a few punches at a time rather than throwing constantly. It is best used for fighters with high defensive abilities, as employing this tactic will place your fighter on defense more often than not. Note that this does not necessarily cause your fighter to stay at a certain range or make use of certain punches - there are other tactics for that.

Nullifies the previous tactic, because it's basically the opposite - it tells your fighter to keep throwing punches and string together combinations. Naturally, it's best used when your fighter is a superb offensive fighter. This does not necessarily mean Sluggers - any other type of fighter can be considered a superb offensive fighter relative to his opponents if, for example, his Offense stats are high for someone at his level of marketability.

Go For The Head!/Work The Body!

These two are lumped together because they essentially do the same thing - they instruct your fighter to target the head or body more. Attacking the head deals more damage and carries with it the chance of an instant knockout. Attacking the body wears out your opponent and tends to have a higher success rate.

This feature is getting too long to cover all the tactics at once, so I'll finish the job next time! In the meantime, please do make your way to my Greenlight page to upvote the game if you're intrigued! Every vote counts!