Some information on the maps that come with the mod.

In Version 1.0 if the TALON Mod we included 7 custom maps, some of which are exclusive to this mod. All maps appear with the tags "[=T=]" as a prefix in the game's maplist. We like to play on large 6-8 player maps so that's what we make. 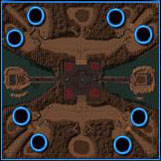 This is an 8 player map that is best played as a 2 v 2 v 2 v 2 because players are paired in the corners. Bases are highly defendable with only one way in or out. The North and South sides of the map are separated by water and the only way to get to either side is through the Fort. However the Fort is defended by a rogue Nod force that will attack anything that comes near it. A careful attack will succeed and then a player can reach the tiberium spikes and capturable defenses as well as a subway network. 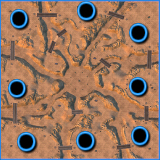 This is an eight player map set in an area where several canyons all converge to a central clearing. In that clearing you'll find 8 tiberium spikes and an EMP structure so it's well worth the effort of getting to the middle and holdng it. Bases have 3 entrances with bridges on the side entrances. 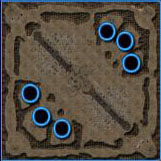 This is a 6 player map designed for 3 v 3. In the middle of the map lies a deserted city, but even though the desert has reclaimed a lot of the city that is now a ghost town, there's still evidence of the disaster that happened years ago. 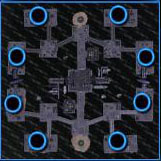 This map starts with a bang, so be prepared! The port is a network of platforms all connected by bridges. It's an eight player map yet there are only 2 tiberium fields, one at the 12 o'clock position and the other at 6 o'clock. Therefore it's a race to build surveyors and get to the tiberium. If you don't make it or get pushed out, you have tiberium spikes in your base as well as 2 silos, but use them wisely! There are more spikes and other capturables throughout the map. 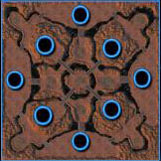 This 8 player map has 4 players start up high on plateaus with access to the center plateau across bridges, and then the other 4 players start on the lower areas between each each of the higher players. They have access to tiberium fields that surround the middle plateau and they have larger build areas. 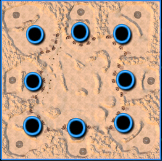 This is a bright and hot 8 player map. You start in a base that already has power, a refinery and defenses. There's a big tiberium field in the middle and 4 tiberium spikes on it's outskirts. For all the charity that you receive at the start and the amount of tiberium available to you in the center, the map is surprisingly challenging. 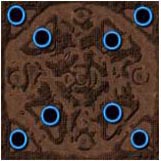 This map, like BridgeFort H, is one where you start paired. However each pair has one nearer the center and this player receives an extra spike as they are seen to be in a more dangerous position. There's no tiberium in the bases so you have to follow the paths to the tiberium fields. There is a small mountain in the middle that is swarming with viceroids. It's narrow pathways lead to the blue tiberium but it can become a traffic jam of harvesters if you don't have the means to keep everyone else away. 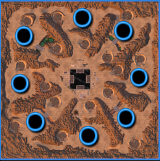 Blackout is a loosely based on the Generals map "Whiteout". A lot of the action occurs in the middle of the map where there are 8 tiberium spikes around the reservoir. Strong buildings offer garrisoning options and there are back ways into each base as well. 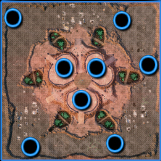 This is a map designed for 3 vs 5 comp stomps. The Nod Citadel in the middle was built on a rich tiberium field which all 3 defending factions share. There are 3 main entrances to the Citadel that lead up to the tiberium field. These entrances are defendable if you get to them early on and they also each have 2 tiberium spikes. Each of the defenders base also has a rear entrance. The attacking positions have large amounts of tiberium as well as ally mutants defending the open areas to their bases. 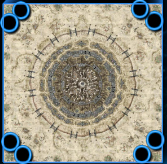 Mr. David has kindly allowed us to include one of his maps in version 1.1 of the TALON Mod. The map is "Sarajevo YZ8" which is one of our favorites, so we're really glad that he's given permission to include it.

It's a 4 x 2 setup with lots of capturables in the middle as well as being very nicely detailed and textured map.

It's worth checking out his map pack at;
Commandandconquer.gamefront.com

Awesome maps checked them out myself last night, and dang good job guys. However one problem with the update! Why is their a paper model in the middle XD I mean really you can at least put a 1.2 number under it! XD