More about the development of Spark & Sparkle. In this part I talk a bit about the presentation, art, graphics, and music.

We’re Essencey, a two-person dev team. I'm JackCheeseJ, I did the art and sound, and my friend, Sam Price, did the programming. We worked together on the design and mechanics of the game.

We started developing Spark & Sparkle in 2016, and released it on Steam in April, 2020. It’s our first game on Steam.

This is more about the development of Spark & Sparkle, continued from Part 1. 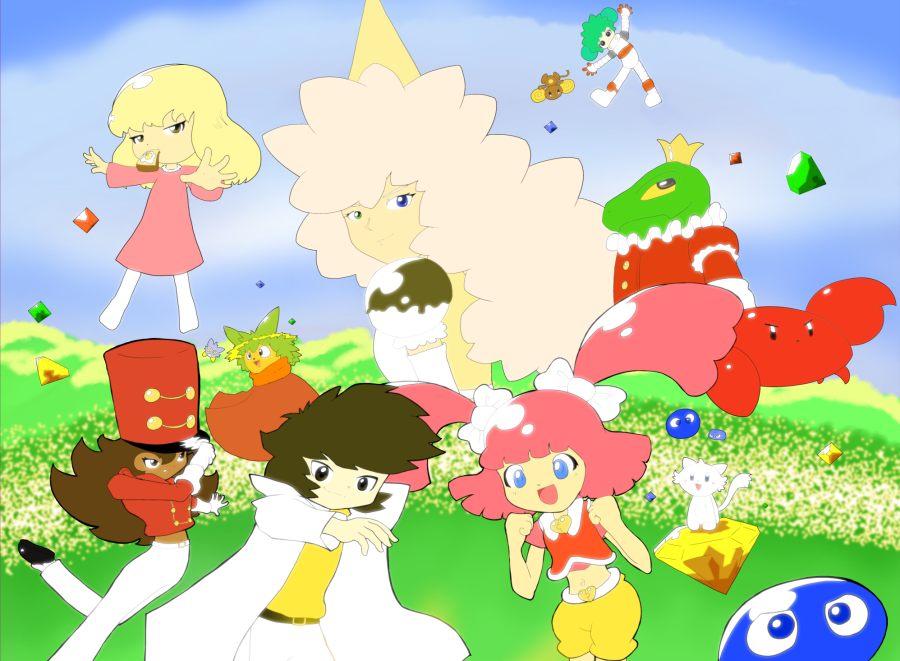 I wanted Spark & Sparkle to feel like it really could have been an arcade game from the mid 1990's - One that you just happened to not have discovered until now. I wanted to create that feeling I remember from being a kid, of discovering something new, without any surrounding context or explanation. The feeling of starting in the middle of a story, or seeing only one isolated element of a piece of media you're otherwise unfamiliar with.

When I was a kid, before I was familiar with as many things, and before the internet was so readily available - It was a very different experience, discovering something new, and having only that one present part of it in front of you - One episode, one moment of a game, one poster - To begin your understanding and enjoyment of the thing from.

I wanted to make something to recreate and celebrate that atmosphere of something new and unfamiliar - where the fun of using your imagination to fill in gaps was part of the experience. I hope that, with this game, a few people can enjoy that feeling of discovering a weird, contextless mystery.

It’s meant to feel like there could be more to the setting and context, but with everything simple enough that you don't feel like the vague presentation is leaving out something vitally important to the moment-to-moment experience.

That kind of atmosphere, rather than a clear story or context, was my goal with the game's art and theme. I hoped to make something that blended cliches and familiar archetypes with unpredictable elements, too. You could describe a lot of things that way, but I was hoping to combine those effects in an especially strong, heavy-handed way that I hoped some people would find entertaining, and maybe a little unusual. 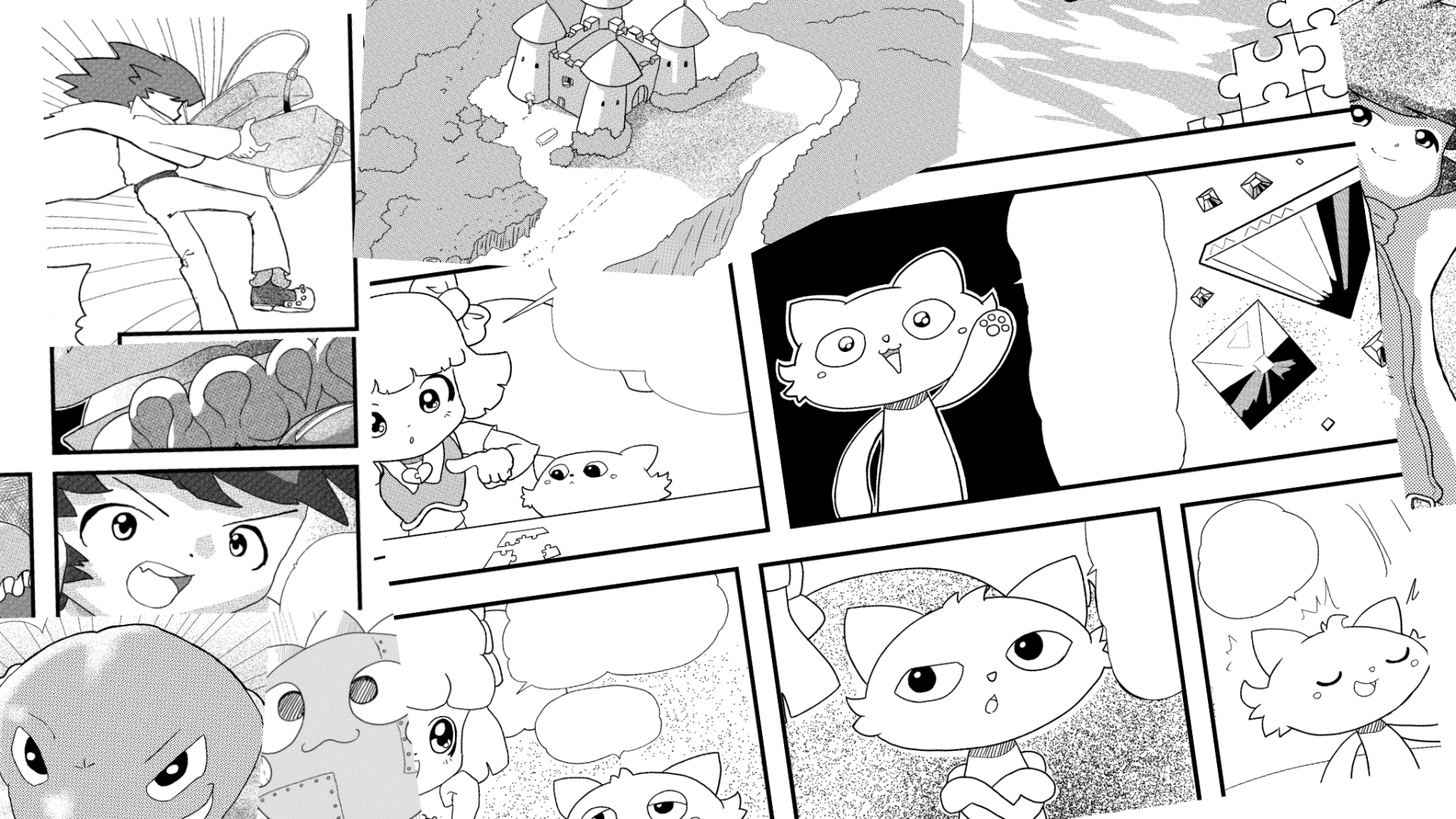 I remember sometimes, especially when I was very young, hearing only a brief moment of a song, for one reason or another - And not hearing the music clearly, I would interpret it in a strange way, thinking for a moment the music was in some key signature or genre I'd never heard before. Stopping to listen, or finding the song later, to hear more of it, I’d nearly always find it was more “normal” than what I’d imagined hearing.

One of my goals with Spark & Sparkle's music was to make songs that sounded like one of those fantastical genres - with weird key changes and unpredictable melodies - that I remember momentarily "hearing."

In addition to that, with some songs, I tried to create a similar vibe to some of the music in Pieces (an SNES game mentioned in the previous part), maybe just because I associate “jigsaw game” with that music. I tried to make it all a balance that’s somehow relaxing enough for puzzles, but energetic enough for a shmup.

I’m still very inexperienced with sound production. I wasn’t confident I’d have much success trying to imitate audio limitations of old hardware, so instead I kept the retro vibe in mind as a vague direction, and went with the music I felt turned out the best.

While Spark & Sparkle uses a 16:9 aspect ratio, it sort of pretends to not be widescreen as much as it can. In most of the menus, the sides of the screen are taken up with a decorative frame. During gameplay, that same space is always outside the play area, and used for gauges and player information - With the added benefit of keeping the busy gameplay unobstructed by UI. We tried to make a lot of the UI look like it could be mechanical parts and displays. 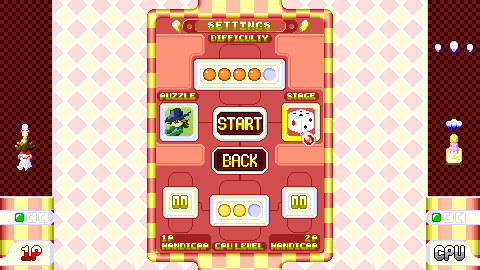 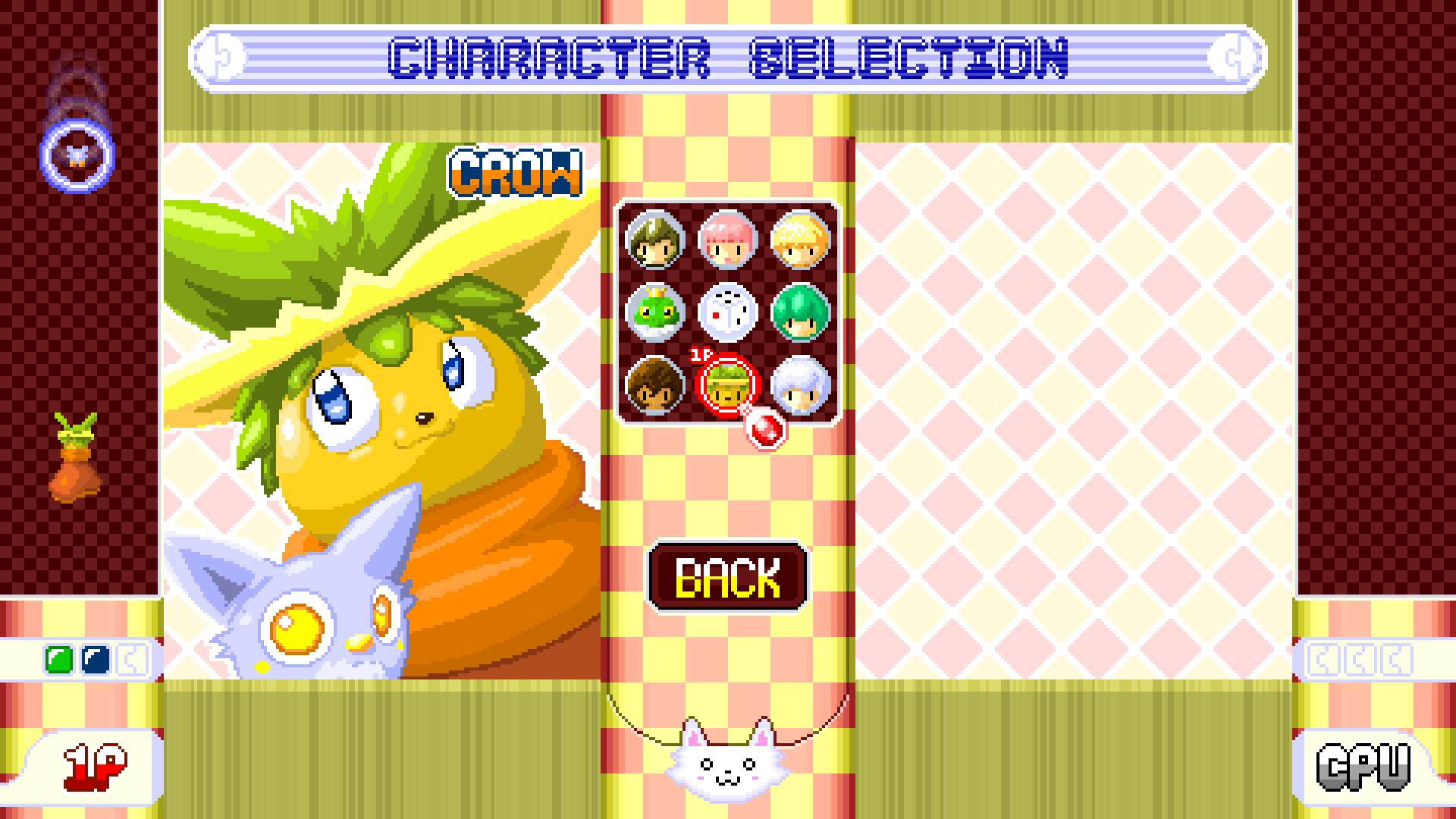 Because of the style we were hoping to approximate, we went with a resolution that allowed for some detail, but that meant I’d have to figure out much denser and more detailed pixel art than I was used to. I already had an admiration for all kinds of pixel art, the more detailed styles of the mid-90’s included, and gained much more appreciation as I attempted it myself.

Many artists have made work that looks much better than what I was capable of. I'm still happy we went with the style we did, though. I learned a lot from it, and I think the resolution was about right for making the puzzles readable.

We tried to make the individual pieces of puzzles distinct from each other, and to give puzzles features that could be used to tell sections of them apart (with a few exceptions for puzzles meant to be more difficult). Since the game rewards players for knowing where to put pieces, we wanted to make sure that players could learn puzzles without ambiguity. Some of the puzzles are pretty tricky, but I hope we managed to make them all fair and learnable. 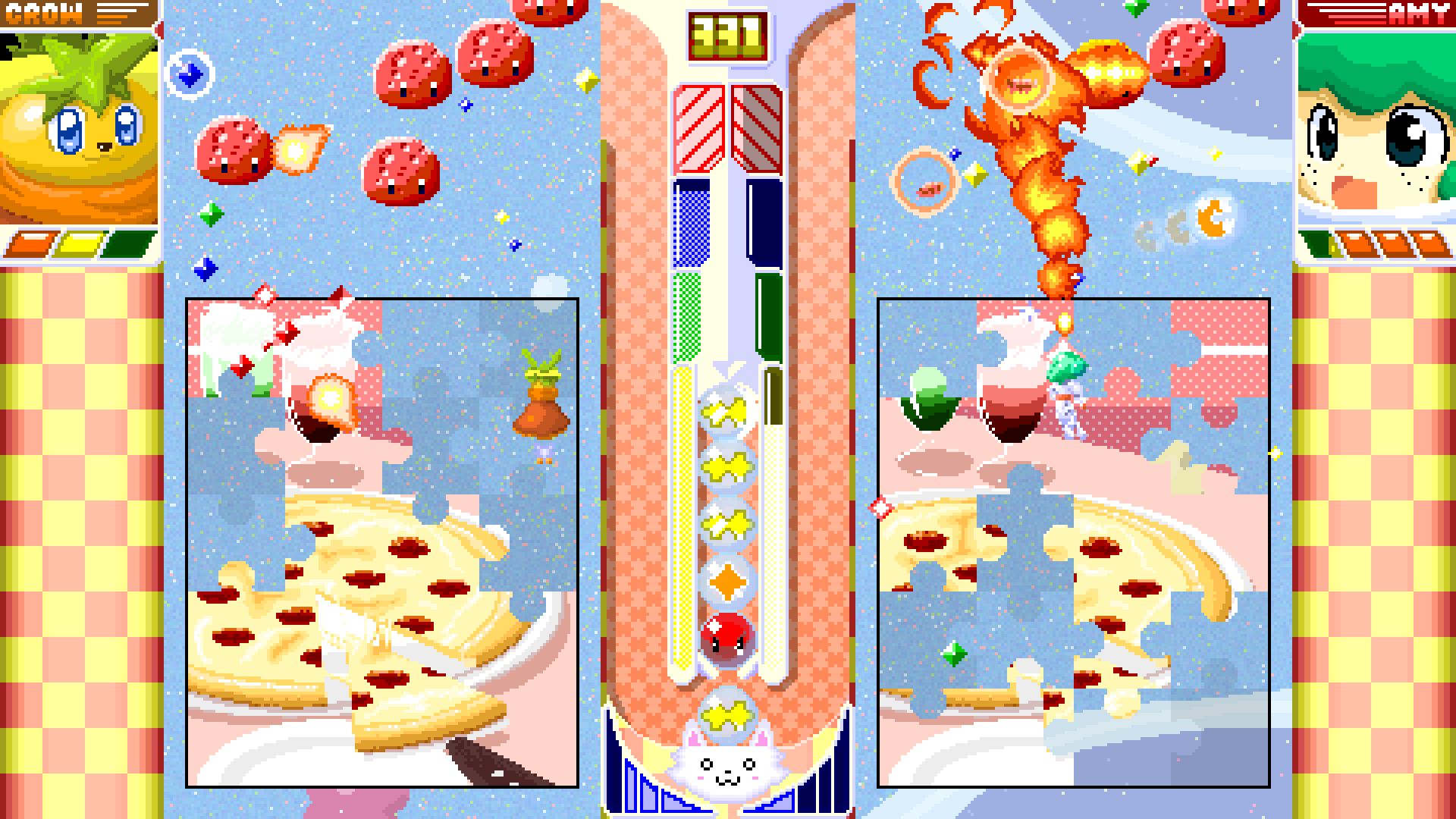 As the game came along, I found myself wanting to use bright, saturated colors for almost everything. Most games keep their usage of colors reigned in, carefully working them into the game’s visual language so things are easier to understand. I wanted the brightness and intensity of Spark & Sparkle’s visuals to be a change from the norm, though - To take the cute, happy, colorful direction to an extreme, and still try to make things work.

I think clear, readable visuals are extremely important in most games, especially in arcadey, gameplay-focused ones like Spark & Sparkle. It can get graphically busy and cluttered at times, but we tried to make sure it’s still possible to identify important things and tell them apart.

We used less saturated colors for the stage backgrounds, compared to most of the game’s interactive elements. 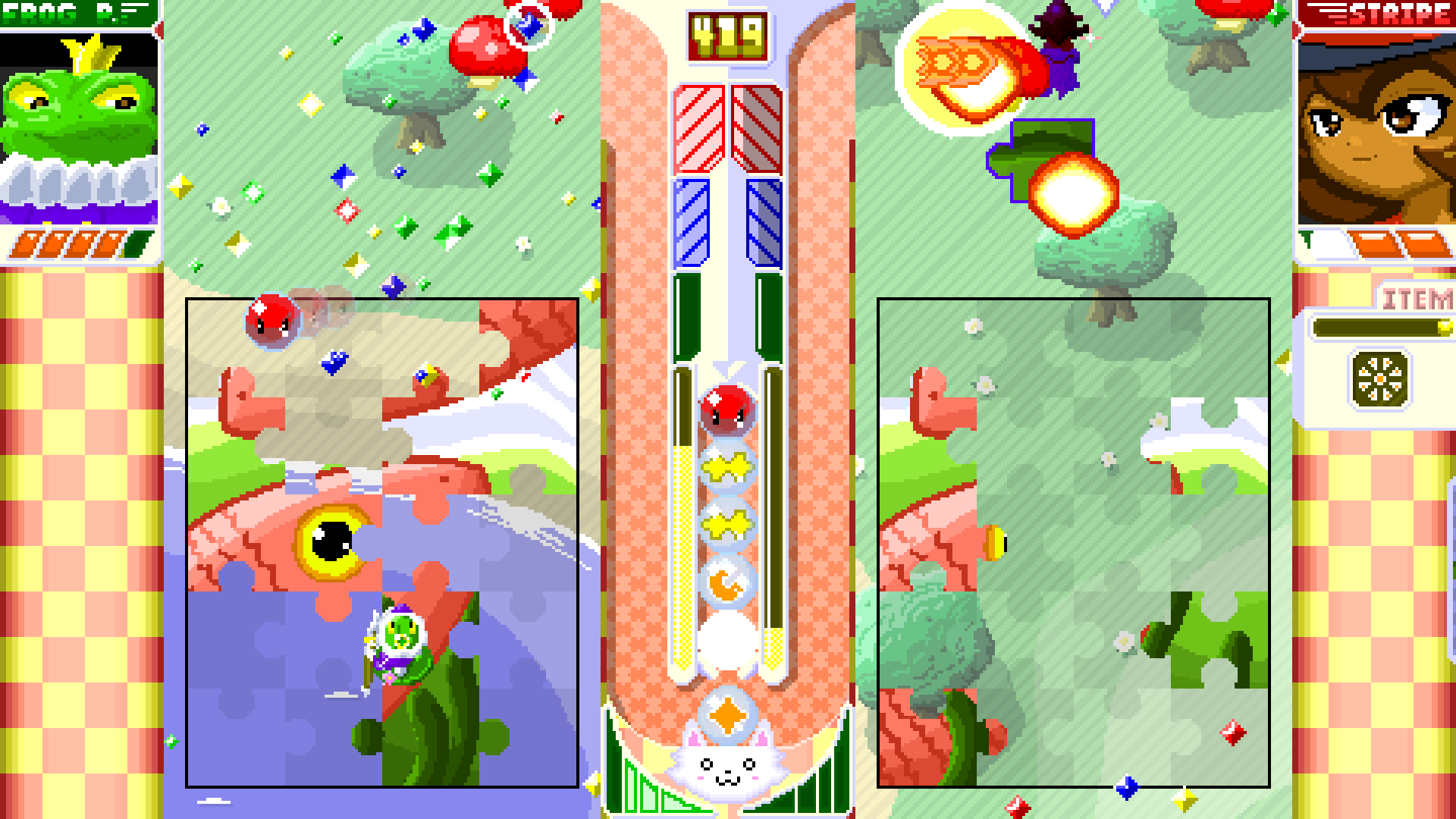 In general, enemies, fireballs, bubbles, and capsules - Things you want to be shooting - Are round. Items that you want to run into and collect, like puzzle pieces, powerups, and gems, are square. It might not be immediately obvious, but I hope that once a player is familiarized with the game a little, those things are distinct from each other without much conscious effort.

There’s a lot of gems potentially on the screen at any time, but since they’re drawn to the player from a distance, and players will typically want to collect them as soon as possible anyway, they’re hopefully not too troublesome of an addition to the visuals. (There’s no functional reason for them to be multicolored, by the way. We just tried it and thought the effect was too fun to change it to a single color.)

Since characters are displayed on top of puzzle pieces, we included a “picture-in-picture” view for pieces whenever you’re holding one. That view also represents the piece as though it’s snapped in place on the space you’re currently targeting, as well as a bit of the surrounding pieces. 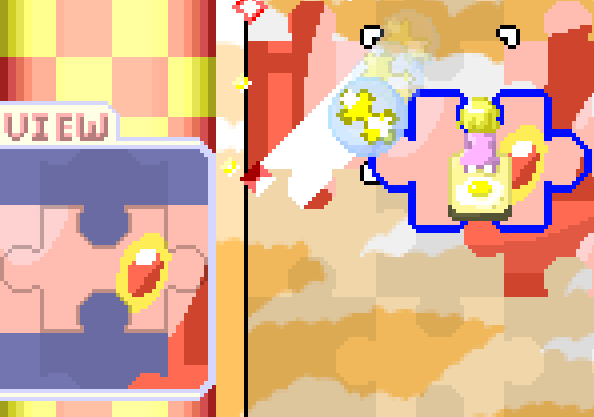 I enjoy character design that’s for a very specific purpose. I especially like it in games because the designs often need to serve many different aesthetic and mechanical functions at once. I tried to make the characters’ visual elements simple enough that they wouldn't become messy or meaningless at small sizes and low resolution, which matched well with the overall cartoony atmosphere, too.

I tried to make the characters themselves varied, weird, and fun, while at the same time having a kind of “typical” and familiar feel to them. 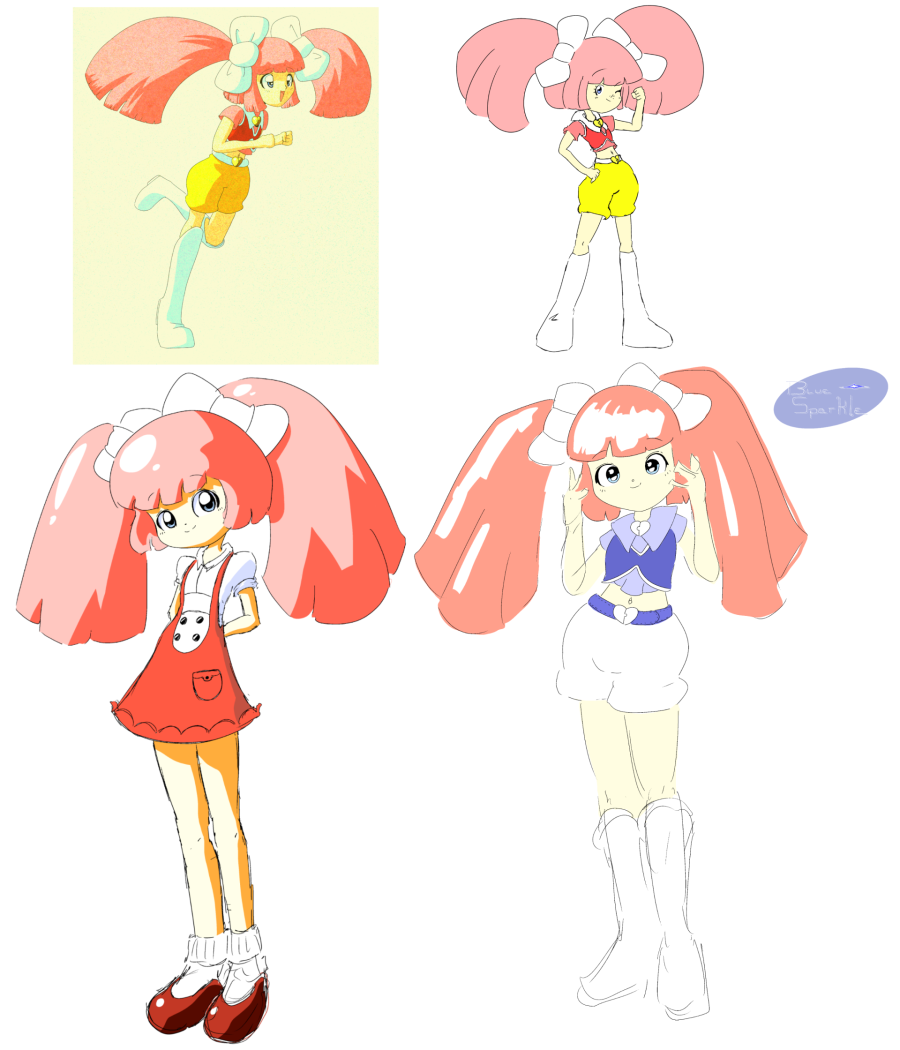 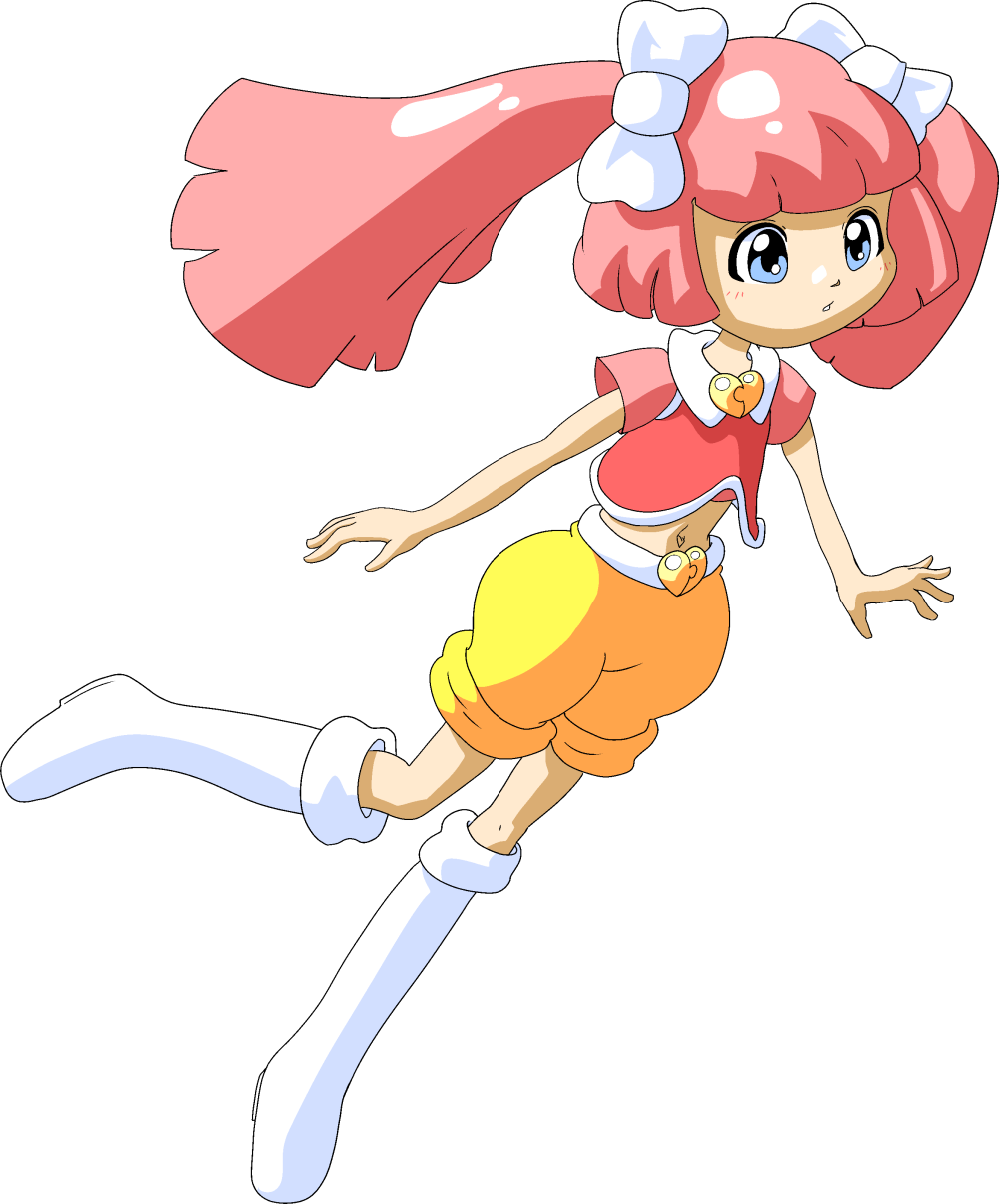 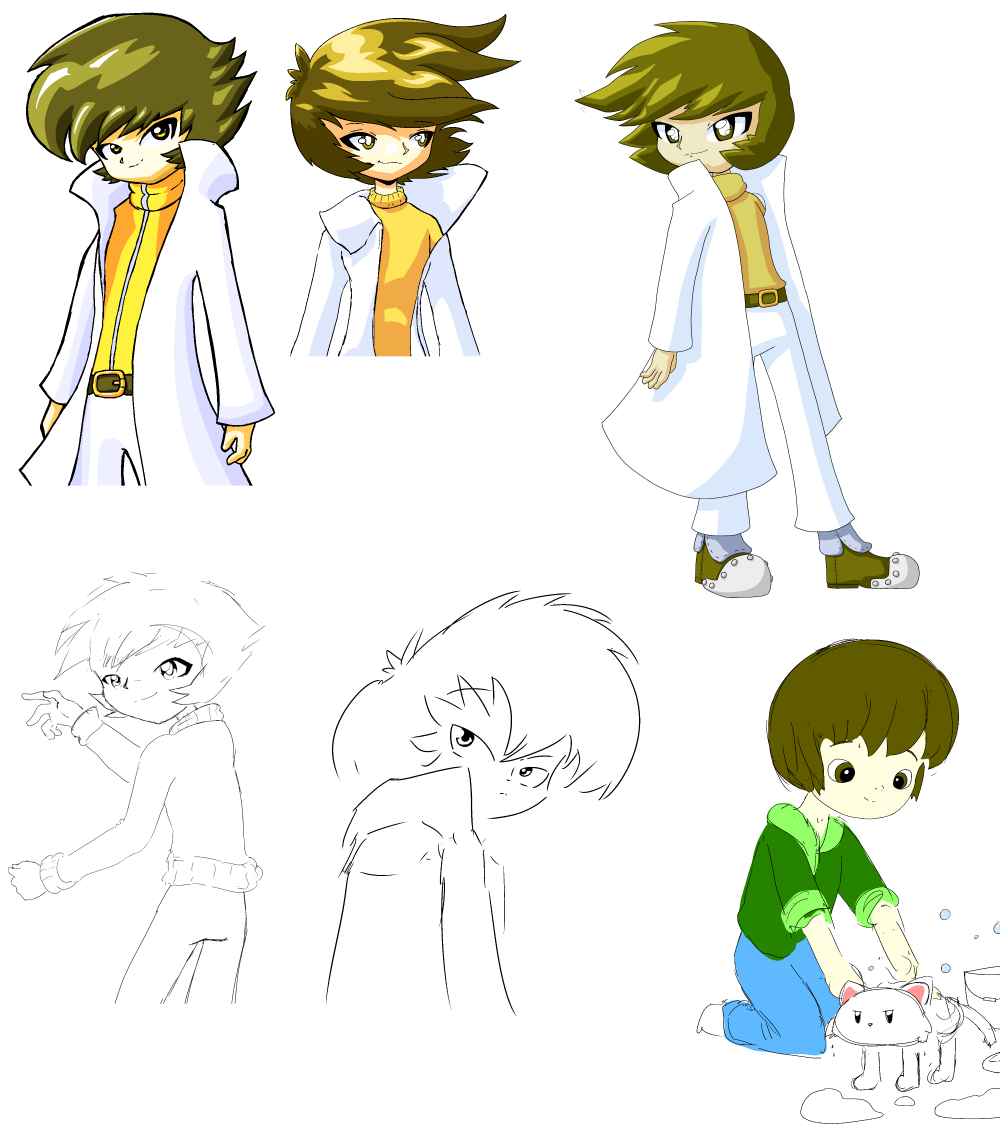 The costumes for Stripe and Frog Prince have more small details in their designs than most of the other characters, but the costumes themselves are very recognizable types of outfits. My hope was that once you see them in detail in the menu’s character art, they make sense at a small size, in gameplay, too. 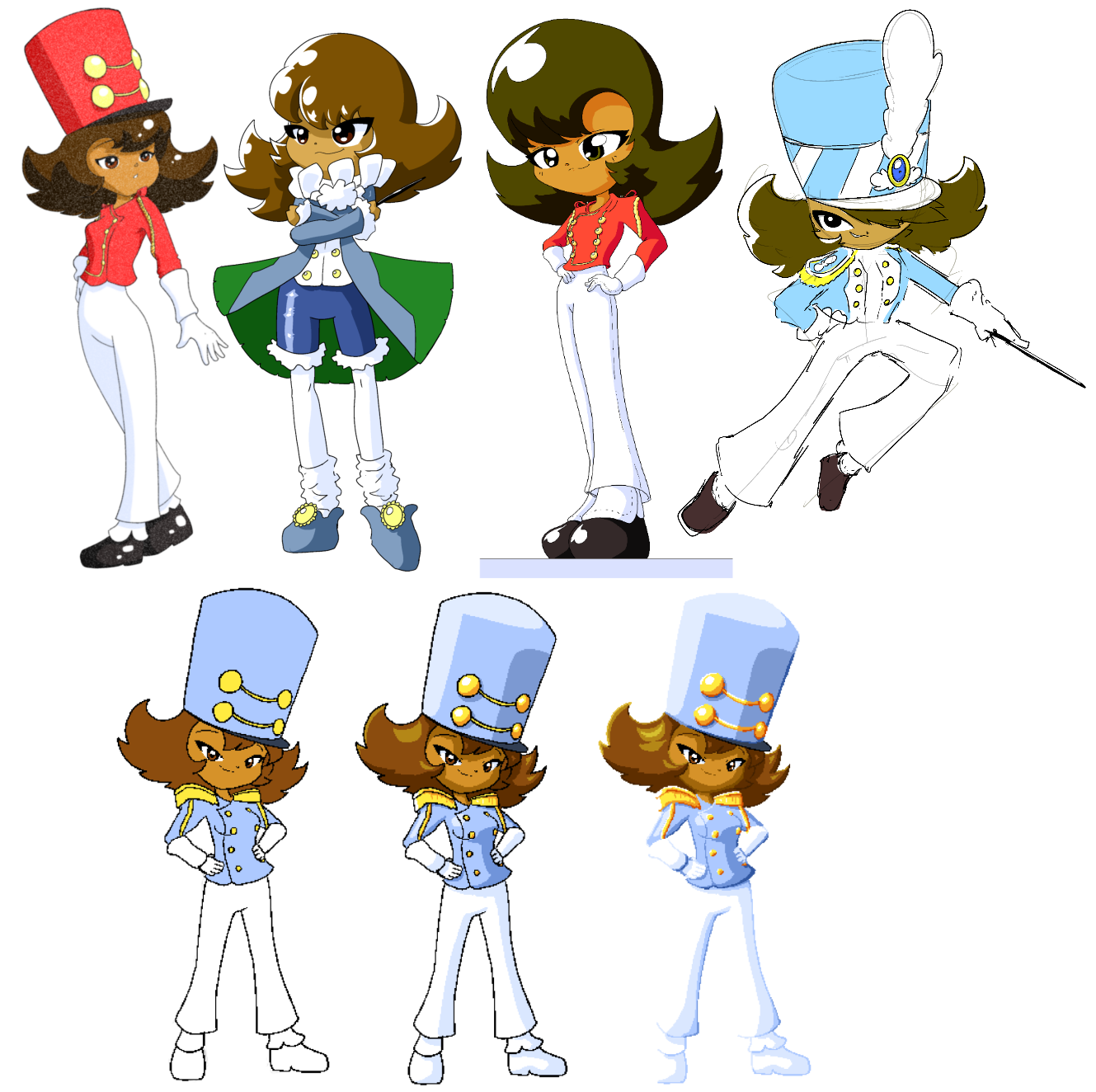 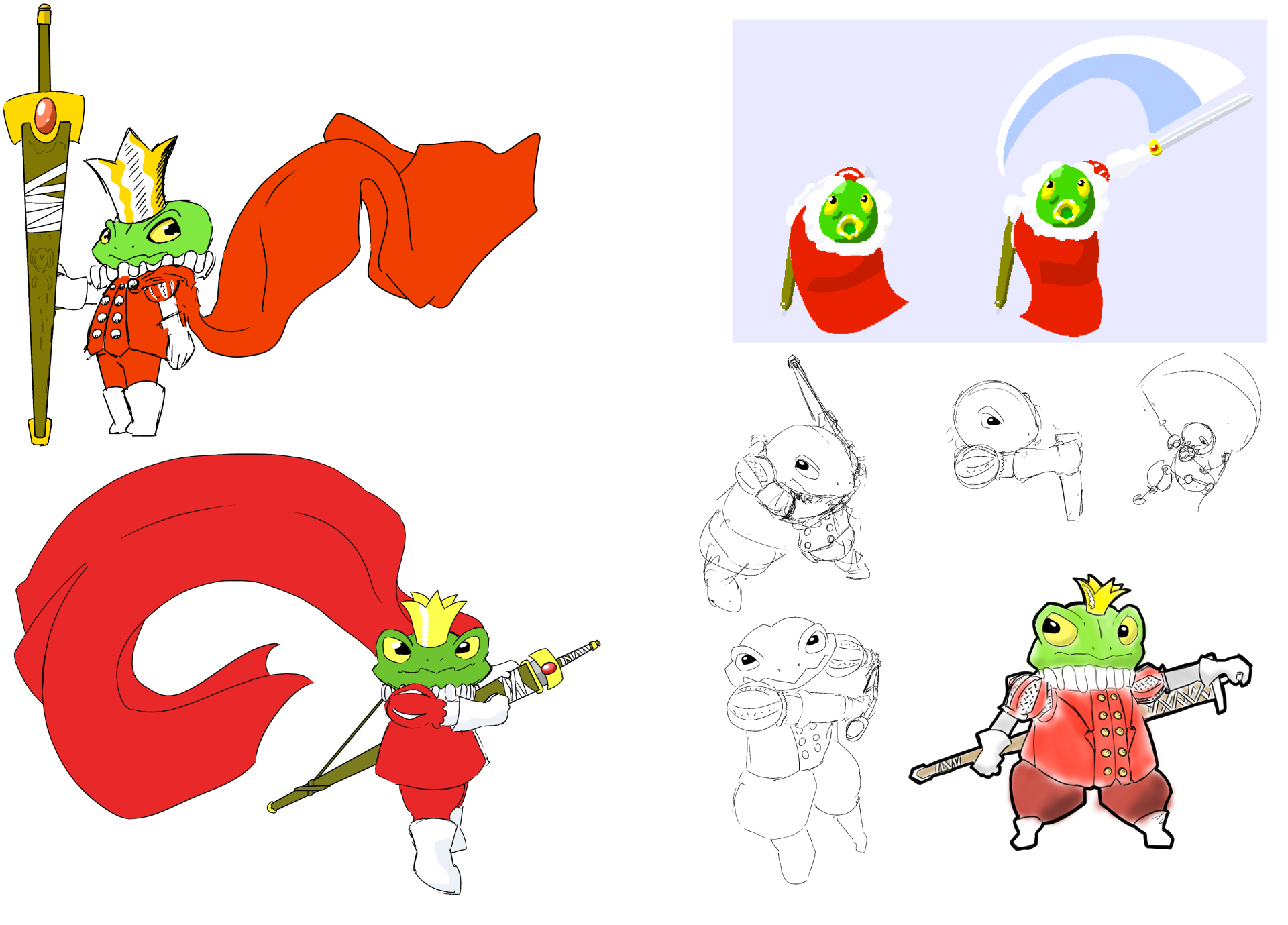 Thank you very much for reading. Whether it’s the gameplay, the atmosphere, or something else, I hope our game has something people can enjoy.

If you made it through even part of what I’ve written here, I very much appreciate it. If you can believe it, I didn’t include everything in this two-part article that I’d hoped to.

If you missed Part 1, you can check it out here.

And here are some more Spark & Sparkle related links: 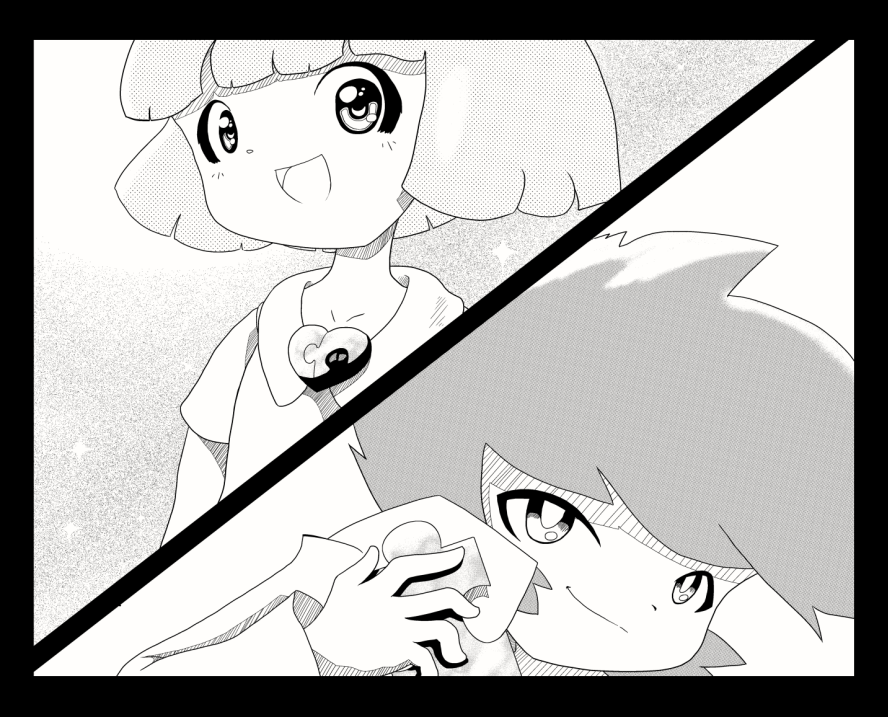