A little cherry on top of already punishing cocktail. The internal politics of the levels and the flying menace. How the indigenous species of the level treat you, your troops and your enemies.

Posted by EvgeniDisclaimer on Dec 2nd, 2014

Some time ago I had a glorious task to write lines for the level 2, and boy this was a disaster. Our beloved leader, long may he reign, made me scream on the entire subway car. I had a chance to truly experience the ruthless difficulty of our game, violent masochist dream that is Graveyard March. Of many twisted features that we've already covered there are several we've not covered yet.

There are obstacles in this game. Nasty orbs of fire, or poisonous goo, or hell knows what other horrible substance. Flying on some predefined trajectories. Usually this means that imp won't survive their acquaintance. First part of the level. First screen even. There are four of this wretched things. Whenever my newly conjured crew gets to the foes it's weakened. It's not like they had much of a chance before, but now there might be a situation in which they won't even reach their destination and die prematurely. Other creatures take damage from them too, but don't put all your hopes there. There are items that can stop this will-o-wisps and buildings to make your troops immune, but they are rare and thus should be taken or defended at all costs.

I had a bone to pick with neutrals. By neutrals I mean everything that's not clearly good or evil. Natives, if you wish, were hogging all the useful items and were spawning around the level at fixed moments and points. Watch out for imp grates, dwarven teleport stones and so on. The visuals are different depending on the level. They're like portals, but you can't capture them. Always neutral, always a major nuisance. It's unfortunate for this spawn that I have a stack of useful items to boot, but I haven't been at the point of strength for long. The stock of items tends to get empty and no amount of blacksmiths can help. After you clear the entire wave of knights it's a sore sight to see cannon wielding dwarves making their way to your portal, while you have no mana left. 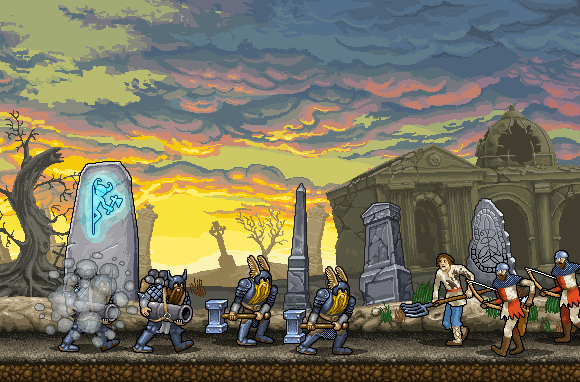 Level two is filled with dwarves and golems. They defend the buildings or as I said hanging out at the items. One redeeming fact about them is that they fight everything. Knight assault will have to cut its way through them as well. Don't get too relaxed though, once they get through that's usually it for you. They do get all the beating, but they also get all the loot. As such one has to be aware of spawn points as well the other side of the screen. If your troops get in a pincer of knights on one side and spawned neutrals on the other you have virtually no chance to save them. 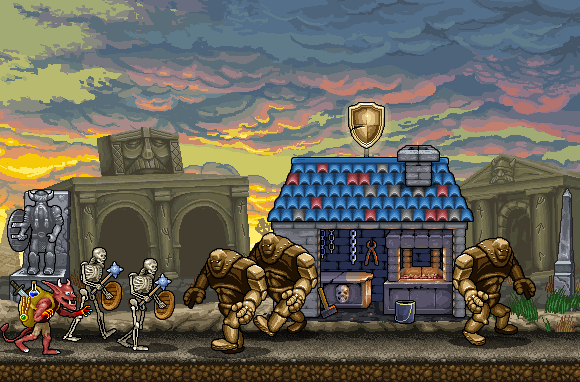 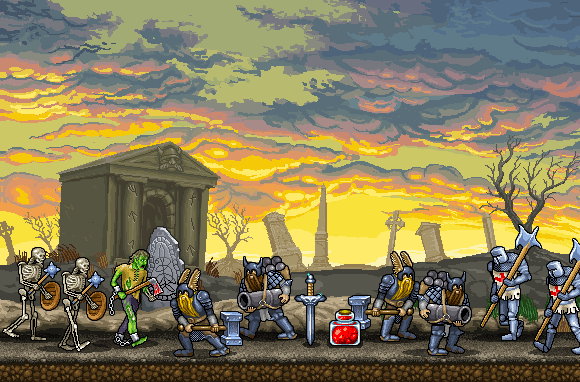 This is casual mode. Game is tough, trust me. Hardcore is even more ruthless and yet the satisfaction of your schemes bearing fruit and beating level is worth it.