The developers of John Q Averageman made headlines this week as they were interviewed for the Beacon-Villager, a Massachusetts based newspaper.

Posted by BombShelterGames on Nov 9th, 2012

Below is a newspaper article written about the developers of John Q Averageman. It was published in the Beacon-Villager on November 8th 2012. Article provided courtesy of the Beacon Villager and Wicked Local (http://www.wickedlocal.com/) Authored by Caitlyn Kelleher. 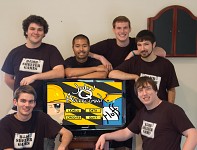 Maynard — The idea of keeping it simple worked well for six Maynard natives who developed a computer game and then translated it to a phone app. John Q Average Man is the name of the game. It is simply described as a fat guy trying to get his beer at a construction site. “You play games and you never know how much goes into it,” said Owen Leach, who was the driving force behind the idea.Leach was in the pre-med program at Brandeis University, when in 2009 he decided he really wanted to be a game designer. Leach started attending conferences and programs for game creators and listened to the advice of just going out and doing it.Leach pulled his high school friends – Chris Ocampo, J.P. Mosca, Jim Salvati, Leach, Bennett Tyler, and Kevin Kozik - back together about three years ago as he tried to figure out who could help him bring his new idea to the mobile screen. The young men had gone to different colleges and were working in a variety of fields, but each thought he could devote his free-time hours to this endeavor.“We’ve all been life-long gamers,” he said. The group formed Bomb Shelter Games, named after the basement bomb shelter style hideout they had while in high school.“When Owen gathered this team, our backgrounds suited our roles in this,” Mosca said. Mosca is the audio director; he edited all of the music, the sound effects and other related details for the game. Salvati, a software designer at iRobot, is the tech director and completed all of the programming for the game.Tyler is the art director and drew all of the sketches for the game, which appears as if they are part of a flipbook. Kozik wrote the eight musical scores for the eight levels/worlds of the game and Ocampo is the company’s marketing manager.Leach is the game designer and creative director for the company.“We didn’t even finish [the first game],” Leach said. An idea they spent two years trying to work through was just too complicated for a first attempt.After a six-month break, the group came back together and this time Ocampo was with them, and they decided to work on a more basic game. “This one is just jumping and getting to the end of the line,” Salvati said. In this game the character, John Q, travels through different aspects of the construction site and runs into a variety of obstacles on the job as he tries to get his can of beer.

“Everything has to make sense in terms of the game concept,” Leach said. For example, why does John Q have trouble jumping? Because he’s fat and if he jumps too much he has a heart attack and dies, thereby ending the turn in the game. Why does he want to jump? Because he wants his beer, which also explains why the character is fat. Or how else could the game end? John Q falls off the construction site. Salvati said he was surprised at how much work it was to convert the game from the computer, on which it was designed, to the phone. The amount of processing power and memory the game took up had to be significantly decreased, the command keys had to change and the drawings had to be tweaked so they continued to look crisp and clear.“It took a lot longer than we anticipated,” Salvati said. He estimates that this took at least three months to complete. The group also had to pay to put the game into the Apple app store and wait for the review and approval process, which took about a month.“You get so close and you fail, but we were so close we wanted to finish,” Ocampo said.Now that they have seen the project all the way through, the group does not see an end to the future potential of their newfound company. Leach is working towards a master’s degree from Worcester Polytechnic Institute in Worcester.“When you come up with game ideas, it’s just never ending,” Leach said.The game was released on Nov. 3 through the Apple App Store, Google Play, and through Amazon for the Kindle Fire. The computer version of the game is free to download.
Written by: Caitlyn Kelleher