Probably the single most involved process of making the Rebirth mod, was the re-balancing of classes. Some classes saw significant nerfs (Ninjas) while a slew of other classes were greatly improved. Everything from speed to skillsets were revamped in many jobs. The most notable change is that every class has an Innate ability.

All classes saw a roughly 20% increase in HP. In general classes have been made slower and divided into three tiers slow, medium, and fast. Summoners are the only slow class while Ninjas and Thieves are fast classes, every other class has medium speed. Almost all spells have seen a massive increase in speed. 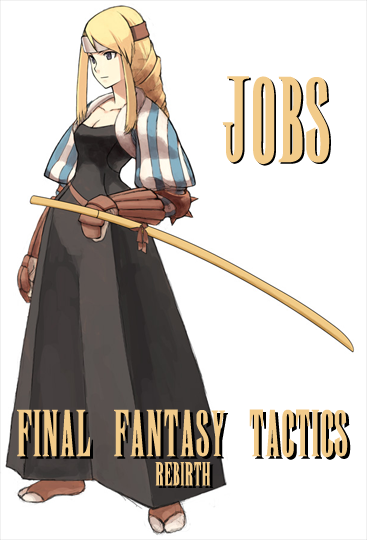 Can you please post the modifications' complete data and values? For instance, what is the new Samurai's PA Multiplier? What is the new exact parameters for calculating geomancy's damage?

You guys are awesome, you made my day with the Monk's +1 vertical range to chakra and revive!!

Playing around and I am really impressed, I can no longer use the methods for playing through this game that I use in the normal version. The enemy AI seems the same, but with the addition of the revamped skills, encounters have a whole new flavor to them.