Information on some of the units that can be used with the Iron Curtain. 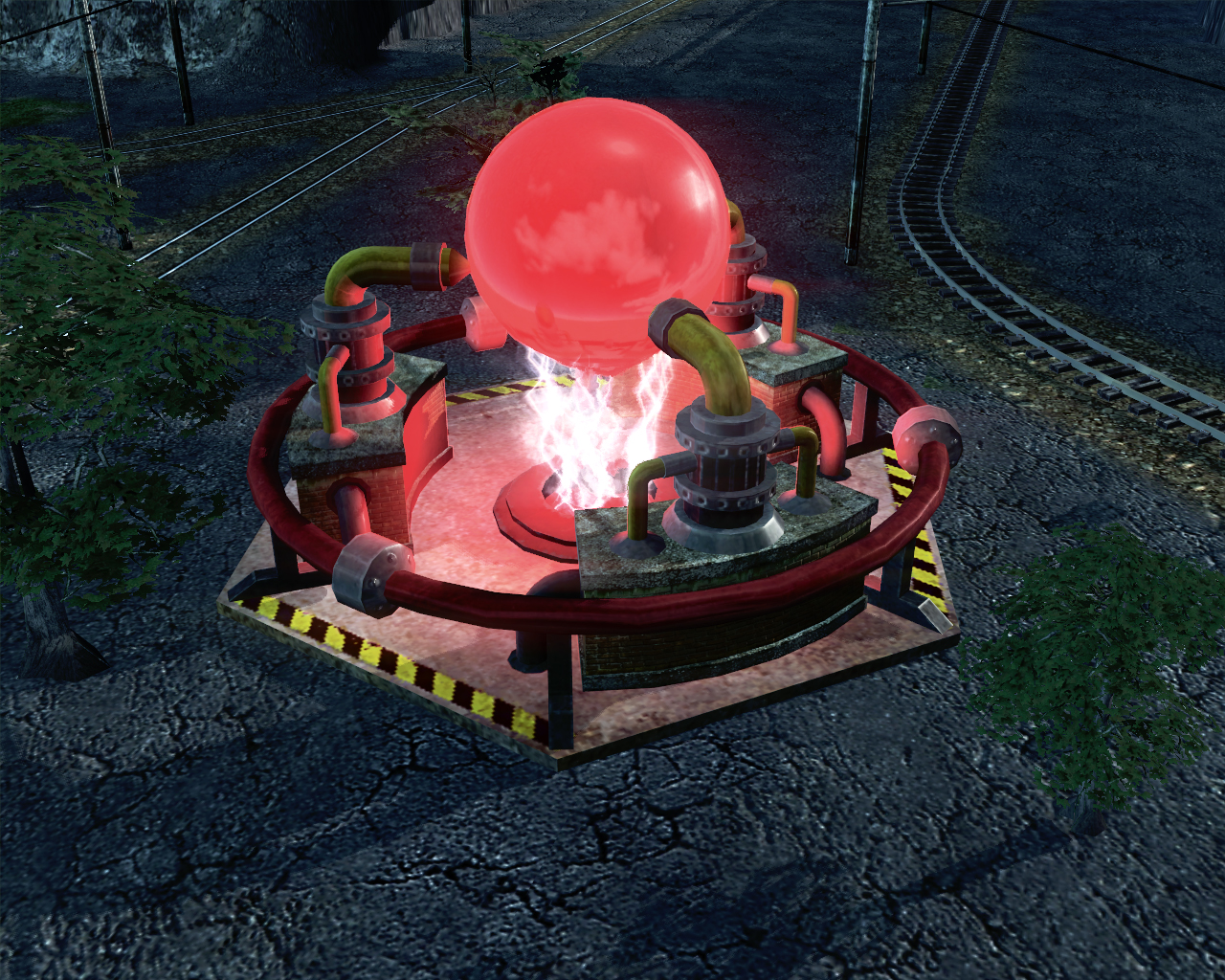 The Iron Curtain in Red Alert History should be easier to use due to the large variety of units available, and also due to the significant fact that you can Iron Curtain aerial units (more on that later).
This article will go through a few of the unit options that you have at your disposal, as well as grading, and providing tips were appropriate.
Target location, or TC, refers to the ideal location at where the group of units that are to be Iron Curtained actually receive the Invulnerability. The closer this is to the target structures\units the better.
Sometimes Iron Curtain will be abbreviated to IC.

Once you are invulnerable, target priority is vital. Ideally you will cripple your opponents to a point were your victory is inevitable, that is what this article is for, letting you know the best units for this outcome. But it is up to you to pick the best targets. Since this is a game were the destruction of key buildings lead to the game ending, structures should be your primary target. Also you should have a plan before you start to attack and have key objectives to achieve (i.e. destroy the super weapon, destroy most of the power plants, destroy conyard\crane then war-factories, destroy tech buildings, etc).

The grading is done on the overall usability of the unit, not simply the damage output, and is out of 10 (minimum 1, maximum 10). Units are graded higher for offensive (base attacking) usability vs defensive usability.
Usage refers to the preferred targets once the units are invulnerable.
Control is about how much macro or micro is required during the invulnerability period in order to get the best out of the units, lower is better (means that it is simpler to use).
Snipe factor refers to your opponents ability to thin your units group on their way to the target location. It does not refer to actual sniping, but rather the usage of fast (typically aerial) or stealth units to pick off individual members of the group. In this case a low snipe-factor means that it is more difficult for your opponent to successfully snipe at the group, which is a good thing. 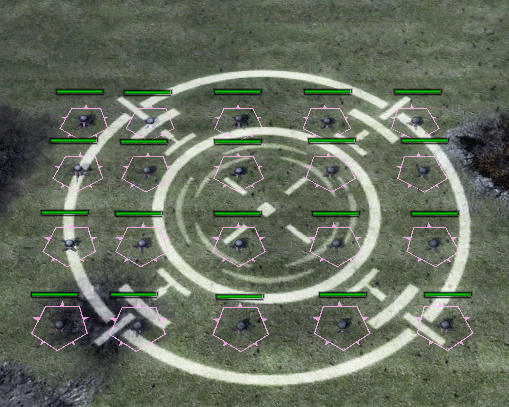 These Drones are upgraded!

As noted, the fact that even though under invulnerability, a drone can be removed from a vehicle (and as such destroyed!), means that this is nowhere near as useful as it could have been. However the only reason that I put this on here, is because of how murderously efficient the drones are at killing infantry!
With invulnerability, there is nothing to stop the drones from massacring enemy infantry squads.
The speed of the drones means that it is impossible for enemy infantry to flee from them, and Terror drones tend to kill an entire squad in one attack! so even a small group of them will quickly work through a large infantry group. However the usage is defensive only, and the specific situation were an enemy is assaulting you with an overwhelming number of infantry forces is unlikely to occur often, but remember this combo when it does!

Snipe Factor: Very high
Notes: Use a small number of Kirovs (no more than 4 or 5), cancel afterburners when Iron Curtain effect has ended! 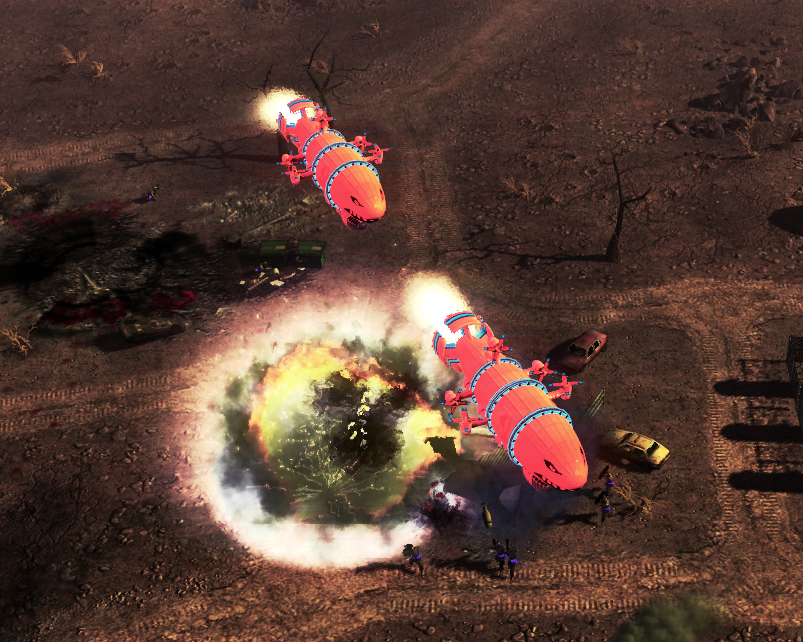 The low grade is because of the luck required to get the Kirovs close enough to the enemy base so you can maximise the time spent under the Iron Curtain. As with a Kirov 'rush', you would most likely be crawling the aircraft along the edge of the map while distracting your opponent, until they get close enough to their target location.
The way this works is, the Kirov has the RA3 Afterburner ability which gives them a massive speed boost, at the price of rapidly destroying the Kirov using the ability (and any overlapping Kirov, lookout!). The Iron Curtain however allows you to nullify this damage, meaning that you get to use the speed boost with no ill effects as long as the Kirov is invulnerable.

The difficulty is that not only will you have to sneak the Kirovs close enough to the target location, but in order to get the most out of the speed boost, you have to give either 'Planning' or 'Waypoint' attack commands that target multiple enemy structures (do not target units!). To further complicate things, each Kirov should be given a different set of structural targets! certainly you would not want more than two Kirovs targeting the same structure (this is because the Kirovs do so much damage, you want to avoid wasteful overkill).
Once the invulnerability has ended, you must cancel the afterburners! If you managed to get quite close to the intended targets before activation, you can cripple a base if you have given the Kirovs individual planned or waypoint targets.

Snipe Factor: Very low
Notes: To destroy Kirov MkII's use Apocalypse tanks, they have dedicated AA missiles that are much stronger then the Mammoth Tanks! 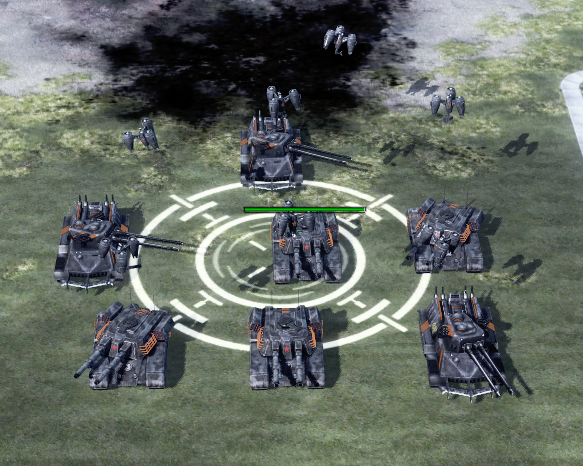 Do not worry about the tank right on the edge 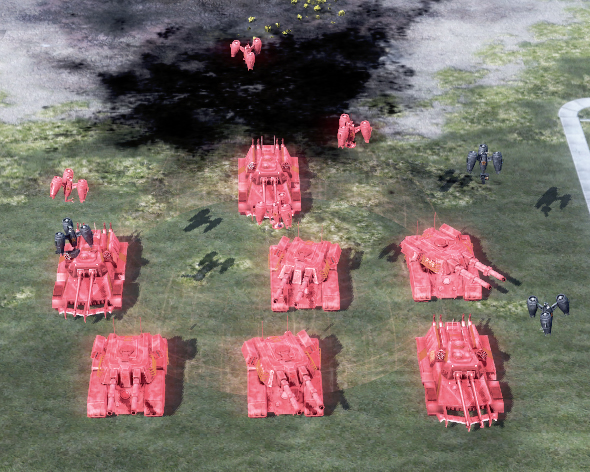 Part of the drive to make the Iron Curtain better was allowing units at the edge of the cursor to get Invulnerability!

You'd think that this would have a higher grade, but the issue is that the units are just too slow!
While you will do tremendous damage to anything around you, when your units are this slow, that 30 seconds runs out fast!
The massive health, self-repair, and the ability to get repair drones, means that this imposing blob of tanks has little trouble slowly reaching their target location, but counter to that, the enemy has ages to prepare for your obvious imminent Iron Curtain use once they spot your slow blob trundling to their base!
Still, a classic! 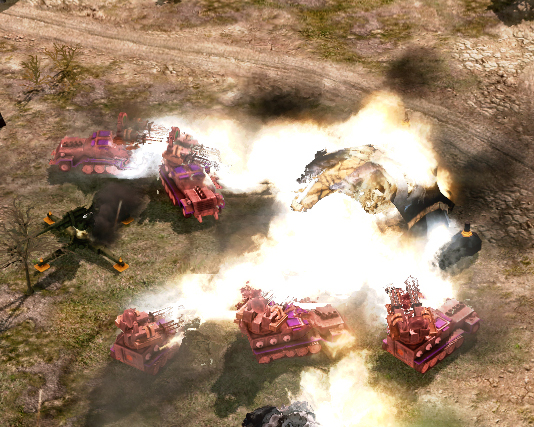 As you will see in the video below, the speed and damage of this set-up makes it a favourite.
You can tailor the passenger to suit the situation you will face, units that try to snipe at the group, will be forced to trade losses, and finally this is one of the combo's were it is possible to retreat after the invulnerability as worn off, due to the speed.

Snipe Factor: High
Notes: You might need some Flak-Tracks in the group to discourage sniping! 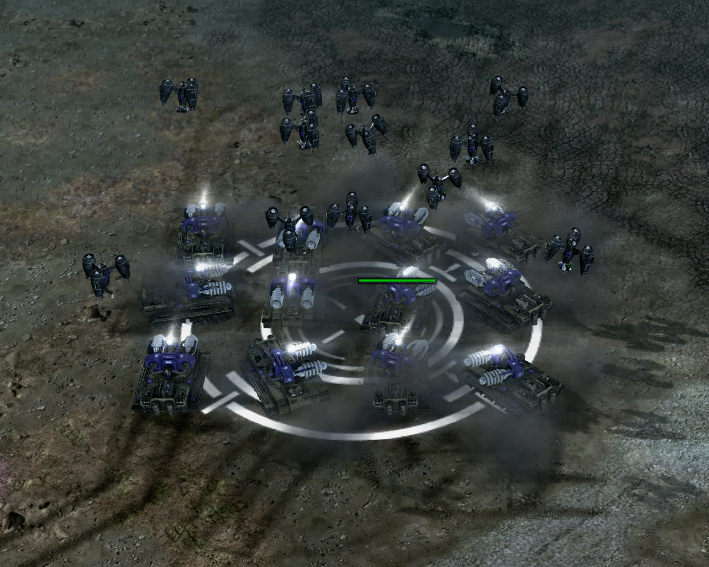 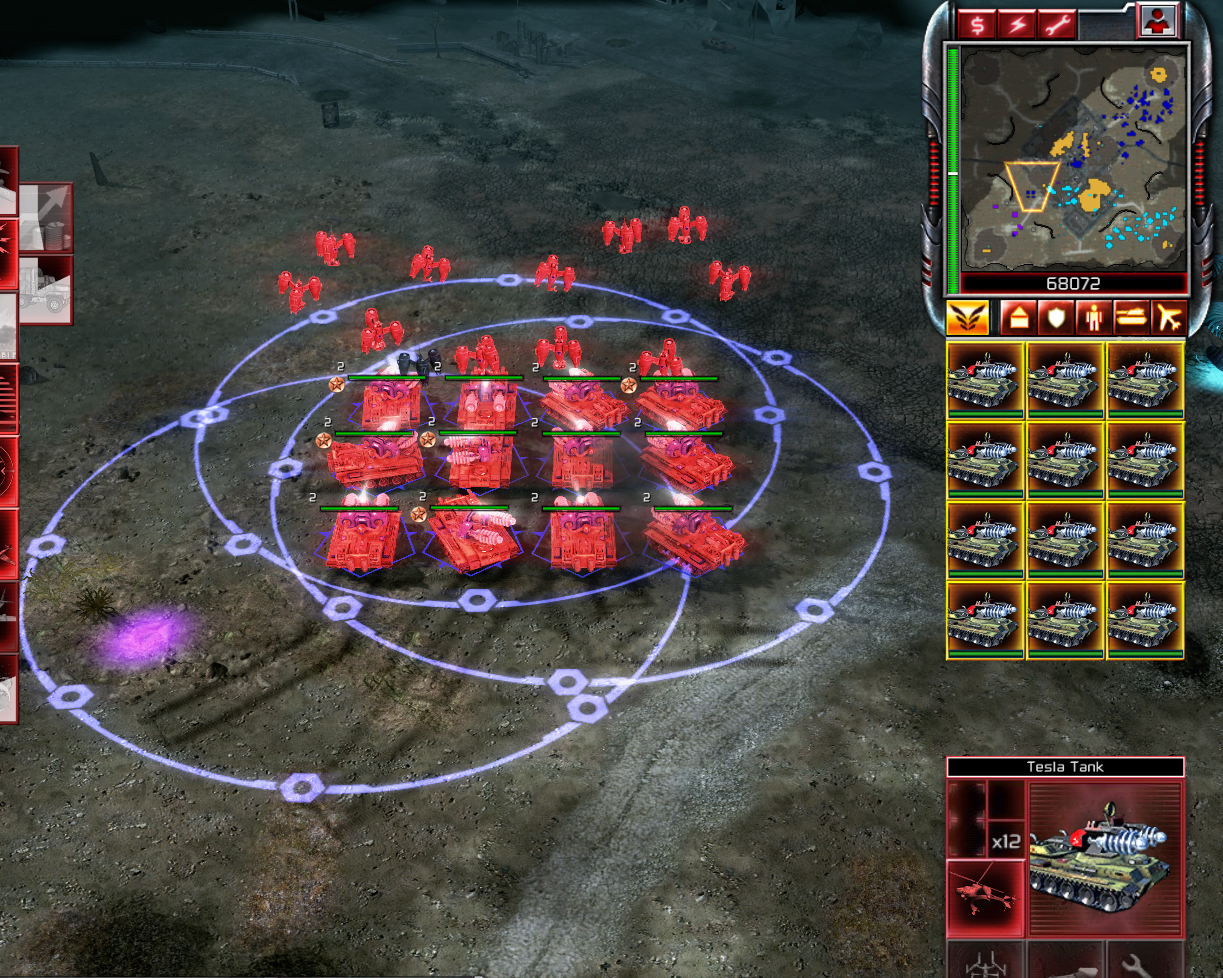 While you will not be doing anything to aerial units, the speed and high damage of the Tesla tank make it a useful Iron Curtain target. The biggest issue is that it is very easy to snipe a group of TT that are closing in on their target location. As noted, you may have to include some Half-tracks (maybe Flak-Tracks) in order to ward off sniping attempts.
If you plan on using your speed to attempt a retreat after the invulnerability has ended, I would suggest that 25% of the group has a repair drone purchased, in case they take any damage from chasing enemy units! 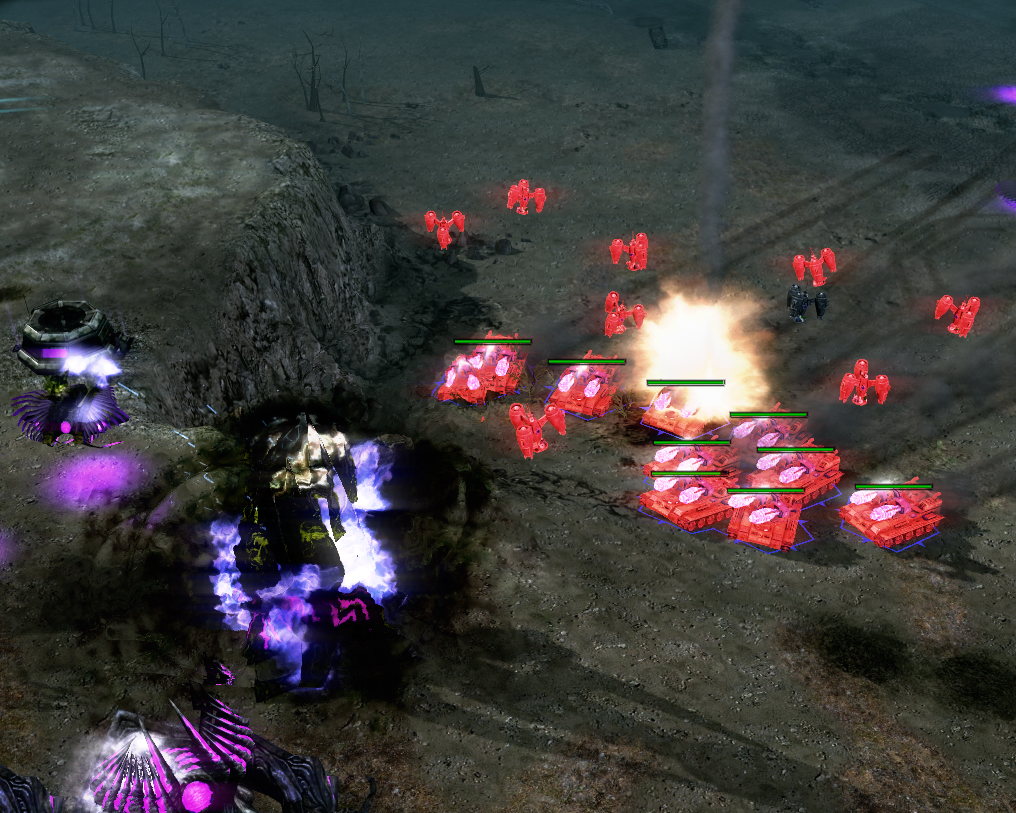 Snipe Factor: Average
Notes: Use aerial travel advantage to approach along areas that enemy vehicles will struggle to reach, if possible!

The surprisingly high grade of this expensive set-up (that cannot hit aerial units), is due to how easy it is to use. As an air unit you can use map features such as rivers, mountains, bridges, cliffs etc, to your advantage to maximise your chance of reaching the target location with a healthy number of units.
A fully upgraded Hind Transport Gunship does tremendous burst damage to static targets, and because it is an air unit, you do not have to worry about winding your way through enemy buildings, being blocked by enemy vehicles, being forced through choke-points etc, and this is another reason why the grade is so high. If you play solely against the skirmish AI, then this is your combo to deal with their super weapon, you will never have to worry about it using this unit!

To get the very best out of this unit involves maximising the powerful burst damage of the heavy rocket pods. Once you get a feel for the reload delay, you will be able to instinctively switch targets just as the right number of rockets to destroy the current target have been fired.

It is recommended that you focus on structures and ignore other targets.
Be warned that if there is heavy AA that is hitting your invulnerable Hind Transports, you will have to make a call as to whether you want to finish a target off, and lose your Hinds, or think about when your invulnerability is about to run out, and begin heading out from the enemy base (leaving yourself enough invulnerability to get out of trouble). 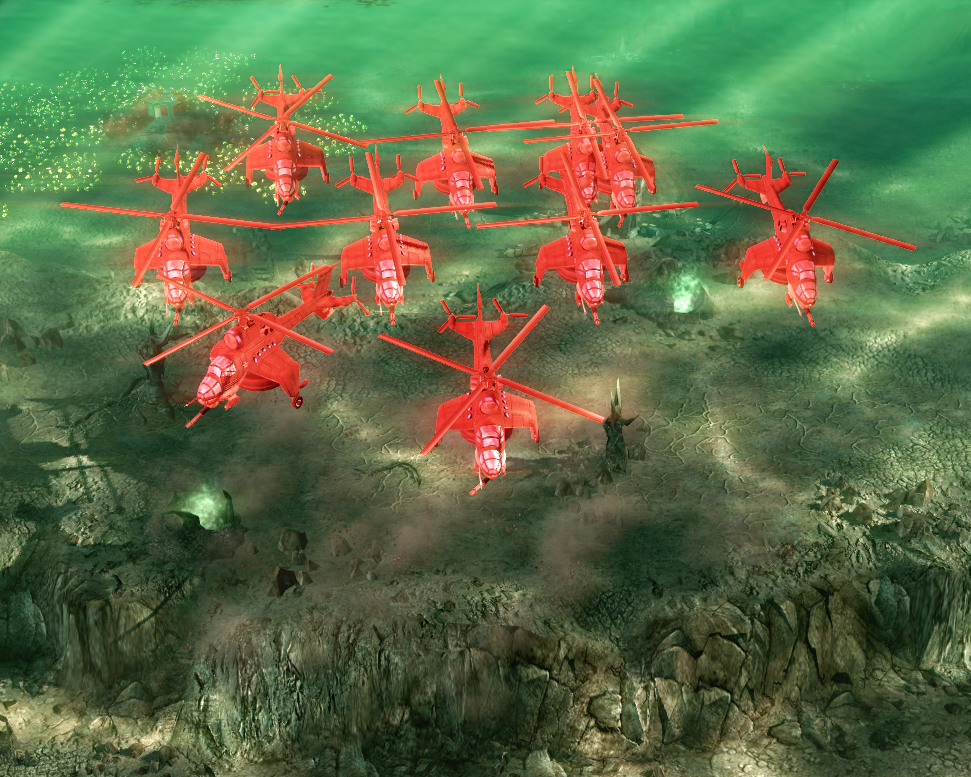 Because of TW dumb aerial overlapping, you can actually IC much more than this!

Thanks for taking the time to skim through this article. If you have any thoughts, hints, tactics, or disagreements! please comment below.
We all know that if the Chronosphere is ever added to this mod, then despite this entire article, it will be much better than the Iron Curtain, but at least there are more options for you try out.
There will be another more generalised article in the future that will give a detailed look at the rest of the Iron Curtain abilities.