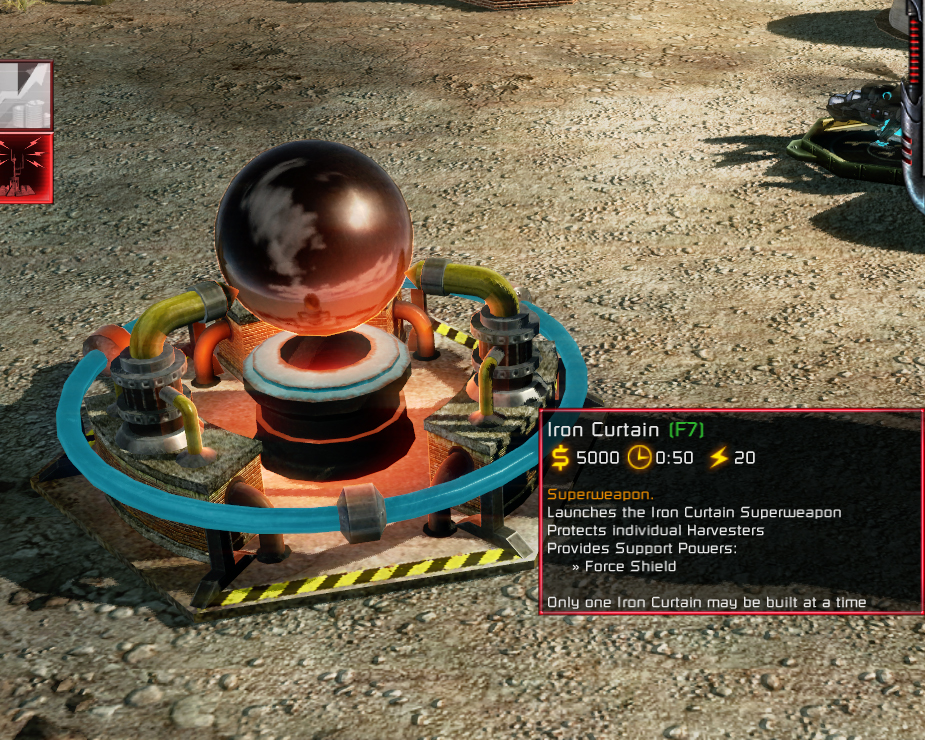 The aim of this article is to fill a player in on further details of the Iron Curtain in Red Alert History, as well as providing a refresh for those who might not be familiar with the uses of the basic Iron Curtain.
There are a large number of Red History specific features, as such it will be worth it for all players to give this article at least a brief look.

Apart from obviously making vehicles and aircraft impervious to damage (as seen in the previous article), The Iron Curtain is also effective on structures as well. If you needed to buy some time when you are under pressure inside your base, such a defensive usage of your Iron Curtain may be called for.

It is very important to note that the Iron Curtain does not account for whether the target is friend or foe. Whatever effect an Iron Curtain would have on your units\structures, it will also have on an ally, or an enemy!
For example you might try to kill the infantry that are mixed in with your enemies vehicles, however if the Iron Curtain catches any of the vehicles (even the very edge), you will make them invulnerable!
A similar situation could occur if you let an enemy get too close when you are Iron Curtaining your vehicles, you could mistakenly catch theirs as well, giving yourself a headache!

As soon as you have placed your Iron Curtain structure, it will immediately be able to provide protection for a single War Miner in danger. This is entirely automated, and works like this: If a War Miner reaches the really damaged state (so damaged it is visibly on fire), the Iron Curtain will respond by casting a single vehicle radius Iron Curtain. This invulnerability will last for the standard 30 seconds, giving the Miner enough time to get out of trouble, and recover health. 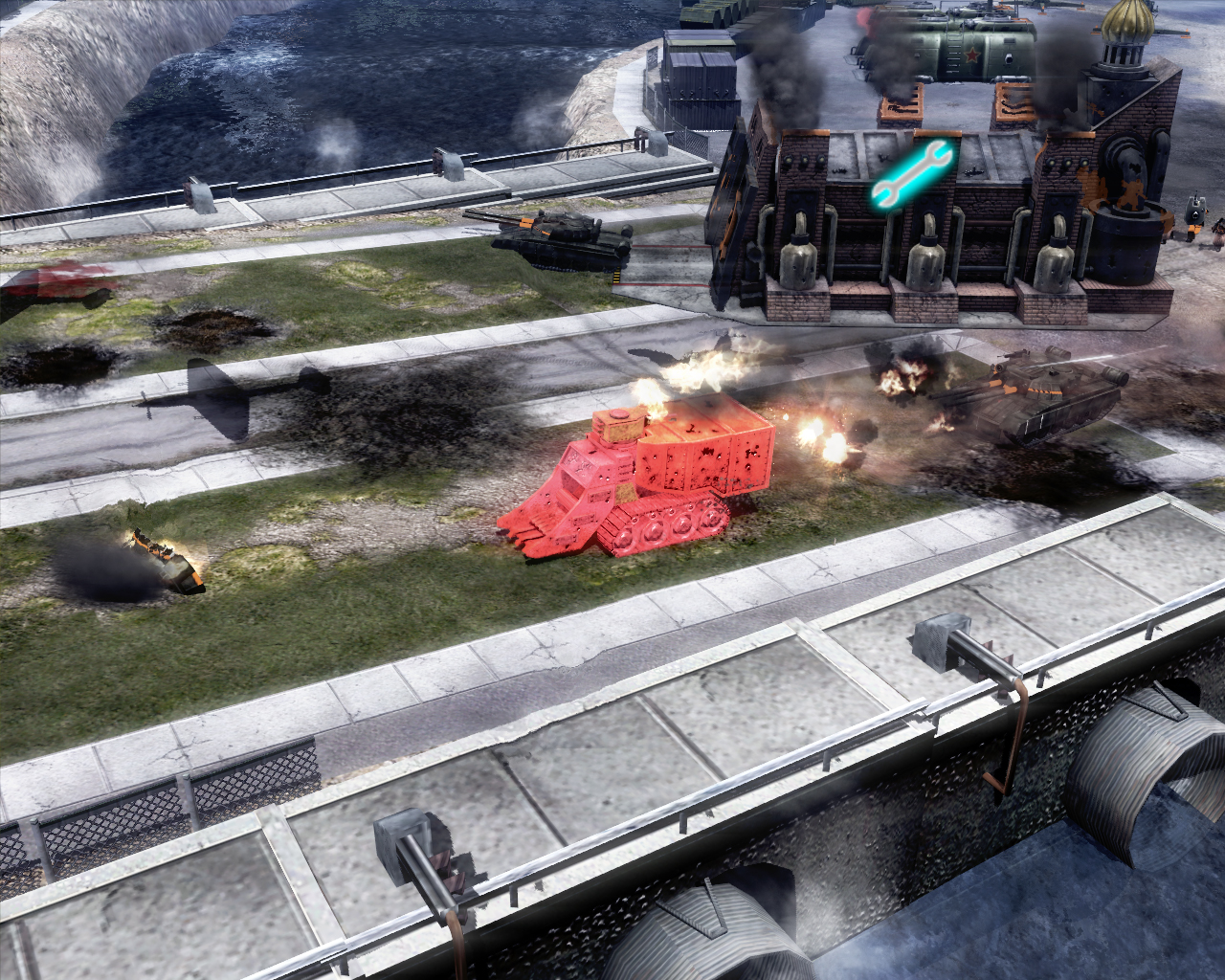 Only one Miner can be given assistance at a time, and the Iron Curtain's ability to assist a Miner recharges in... 30 seconds. What if multiple Miners go to the really damaged state at the same time? The Iron Curtain will randomly pick one of them to assist, and after that assistance, the rest will have to wait 30 seconds to see if they are next.
It should be noted that if a Miner is at a Refinery when it receives Iron Curtain support, the Refinery will also be made invulnerable!

Can this be used offensively? obviously. You can have an invulnerable late game scout that will allow you to check deep within an enemy base, or you can draw enemy fire using your invulnerable Miner, and finally if you are facing mass infantry, you can attack them using the Miner gun, whilst they scatter due to the invulnerability!

Once the Iron Curtain is placed you have to wait for the ability to charge up (5 minutes), but it is free to use once it is ready. For those who are not familiar with this support power, it is essentially an Iron Curtain, but only effective on structures. Unlike the main Iron Curtain, you will only be able to place this on friendly structures (literally, the placement cursor will stay red indicating that you cannot launch the power unless it is over friendly structures), however as Yuri's Revenge players will tell you this is not as good a deal as it sounds! 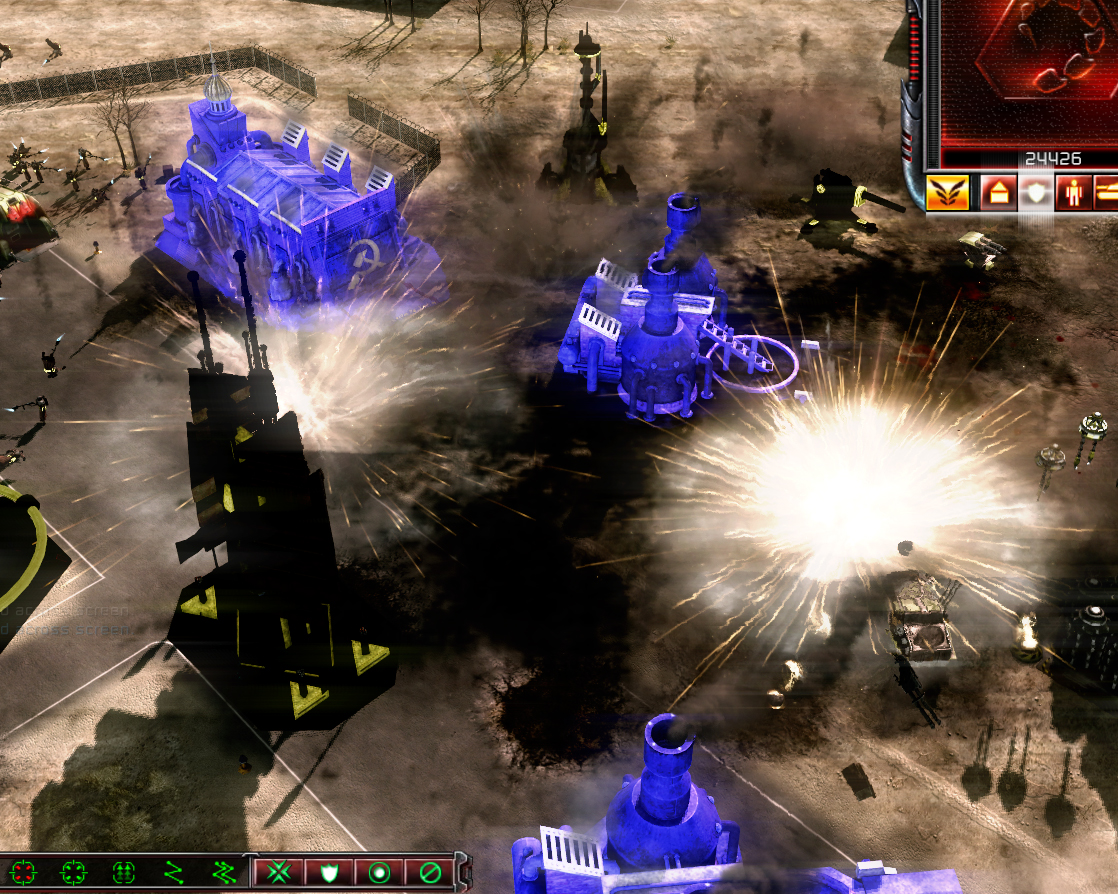 Battle Lab is actually protected, but the low power is overriding the blue glow!

The massive draw back to using this ability is that you will have no power for 1 whole minute (like the Iron Curtain, the Force Shield's protection last for 30 seconds), which obviously leaves you very vulnerable to attack. Apart from not having any powered base defences, you will not be able to use any of your support powers, apart from those tied to the Nuclear plant. Also all of your unit\building production will take twice as long!
In other words you really should consider not using this ability accept in extreme circumstances!

Wait till you can see the bomb!

For example I would consider either the Daisy cutter or Victory bombs as destructive enough events to consider using this ability. Obviously any of the attack super weapons as well.
When it comes time to use it, wait until the last possible moment so that you deploy it in the optimum area (especially with all the negatives you are going to receive regardless).
For example, wait until the actual bomb from an enemy bomber has launched, so you target the correct buildings, or wait till you see where the clouds of the Weather storm form before using the shield, etc.

Buildings that are effected glow blue, however the black tint that a low powered building gets can override this blue, but do not worry, the structure will still be invulnerable.

To recap, this will only save your structures and has a massive disadvantage, use sparingly!

The Red History escalation system is a passive time released support power mechanism that is designed to to increase the danger of secondary super weapons that have been on the battlefield for an extensive period of time.
The idea was that A) The secondary super weapons can seem as the less attractive options, and as such a mechanism that makes them more attractive to a player is a good thing and B) A match were the super weapon building has been on the field for a long time (indicating multiple uses of the super weapon have failed to end the match) but has still not made a decisive difference, means that something extra is needed, since everlasting matches were super weapons make no difference are of no interest to anyone!

This must sound truly atrocious to the 'no super weapon!' crowd, however the reality of the matter is that for the overwhelming majority of matches that you will play, the Escalation system will never be activated.

The Escalation support powers cost nothing to use, and once you have gained a level, you will have access to the associated power as long as your Iron Curtain is powered (and if it is destroyed and you rebuild, you will retain the current escalation level that you had before the Iron Curtain was destroyed\sold).

In order for the Iron Curtain to enter 'Escalation' mode, it requires that your Iron Curtain has been on the battlefield, uninterrupted, for 20 minutes!
So even if you rush to build your Iron Curtain, we are talking a minimum of 25 minutes (more likely 30 minutes) into a game before you begin to benefit from the Escalation system.

After the Iron Curtain has been on the battlefield for 20 uninterrupted minutes, the first support power that you get is the Red Wind (it is the escalation power that most of you would have seen... and been puzzled by!).

The Red Wind is a by-product of an early failed Iron Curtain experiment. While the field produced has no effect on vehicles or structures, it still has enough power to kill infantry. 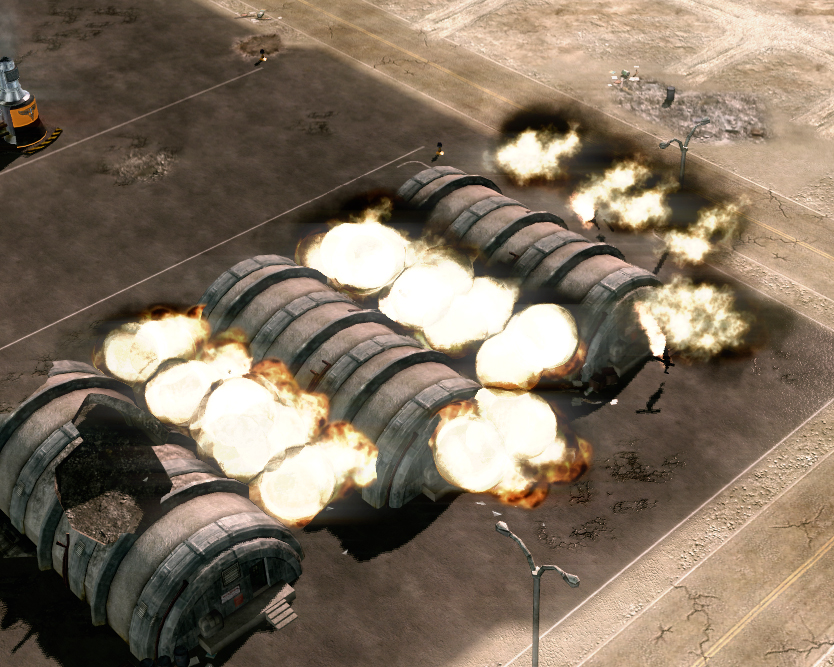 "Better to come out and get shot I think!"

While the purpose of this support power is to stop the player from having to consider usage of the Iron Curtain against enemy infantry, be warned that you will not kill an enemy commando with this ability, that will still require the actual Iron Curtain.

The Iron Decay is the next Escalation power level. This power will appear 20 (also uninterrupted) minutes after the Red Wind support power, so roughly after the Iron Curtain has been on the battlefield a minimum of 40 minutes! You will have to wait 3 minutes for this power to charge up before you can use it.

The Iron Decay is also the result of failed Iron Curtain experimentation, in this case it had the complete opposite effect, making the effected vehicles very vulnerable instead of invulnerable!

This is obviously designed to be used vs enemy vehicles (be warned, as usual it will effect your vehicles if you are too close to the deployment area), it has no effect on either infantry or structures.
The effected units (which glow green) armour is ruined, which causes these units to take 5 times the amount of damage that they normally would! Which basically means that if they are smart, they will run! 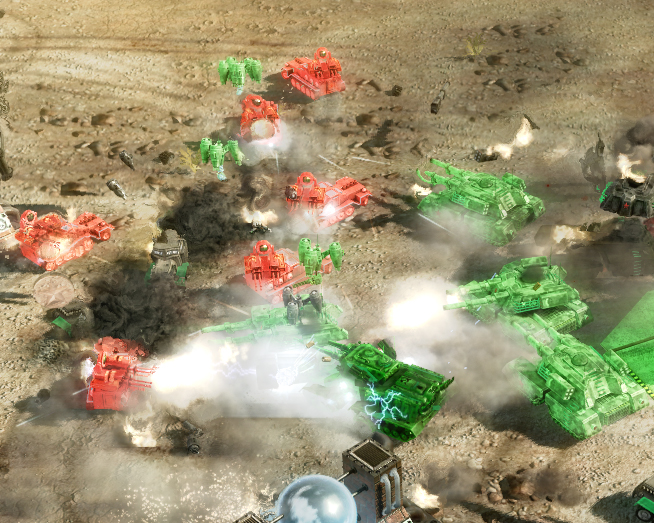 These Half Tracks have passengers to speed the destruction up even more!

This can also be used on enemy aerial units, although with no selection decal to line the cursor up, it could be tricky to avoid misses. 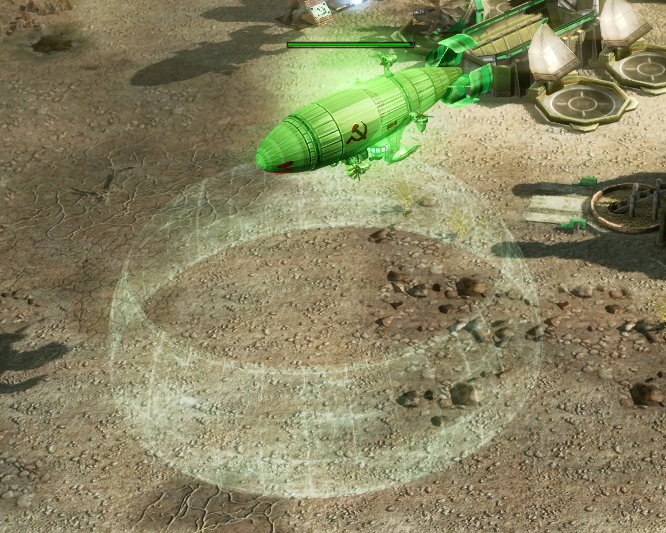 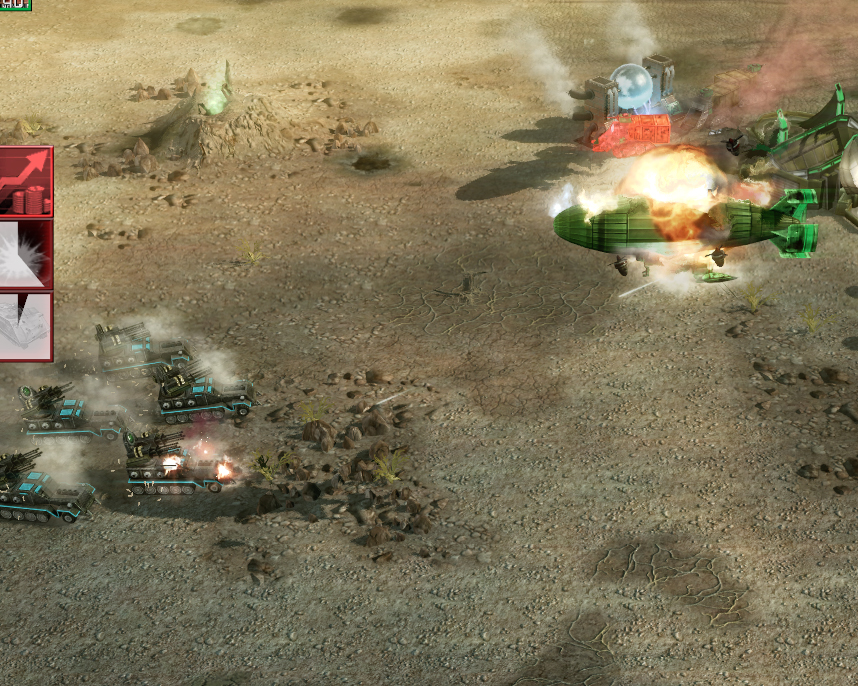 ... making it easy to destroy!

20 uninterrupted minutes after you receive the Iron Decay support power, you reach the point of Final Escalation. Since your Iron Curtain has been on the field for a minimum of 1 hour, and despite the previous Escalations, there having been no victor, the game provides you one final brutal ability!
This ability is passive, so there is no input required by you for this ability to work. 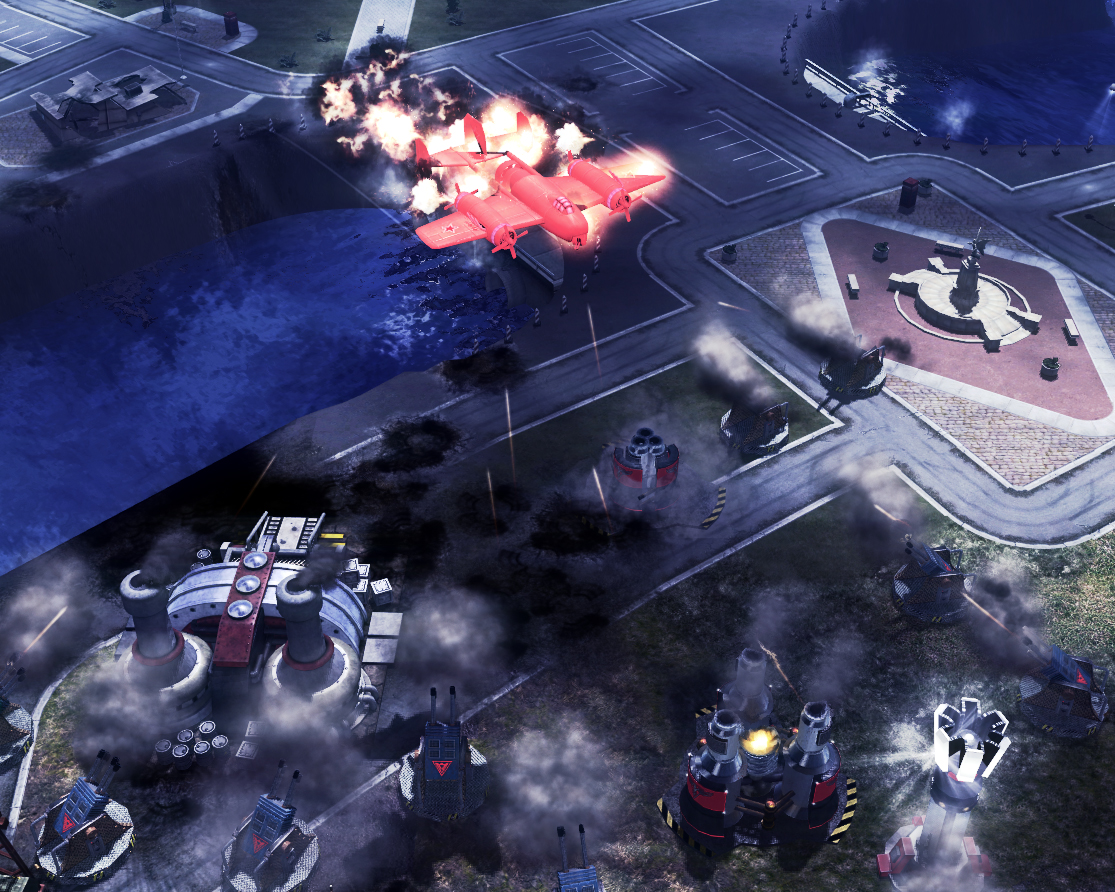 The Invulnerability last 60 seconds, which is enough time for the aircraft to cross the entire length of a large map. There is no recharge for this ability, it will apply automatically every time you deploy the correct air-strike.
Obviously there is no way to stop the bombers from reaching their target! 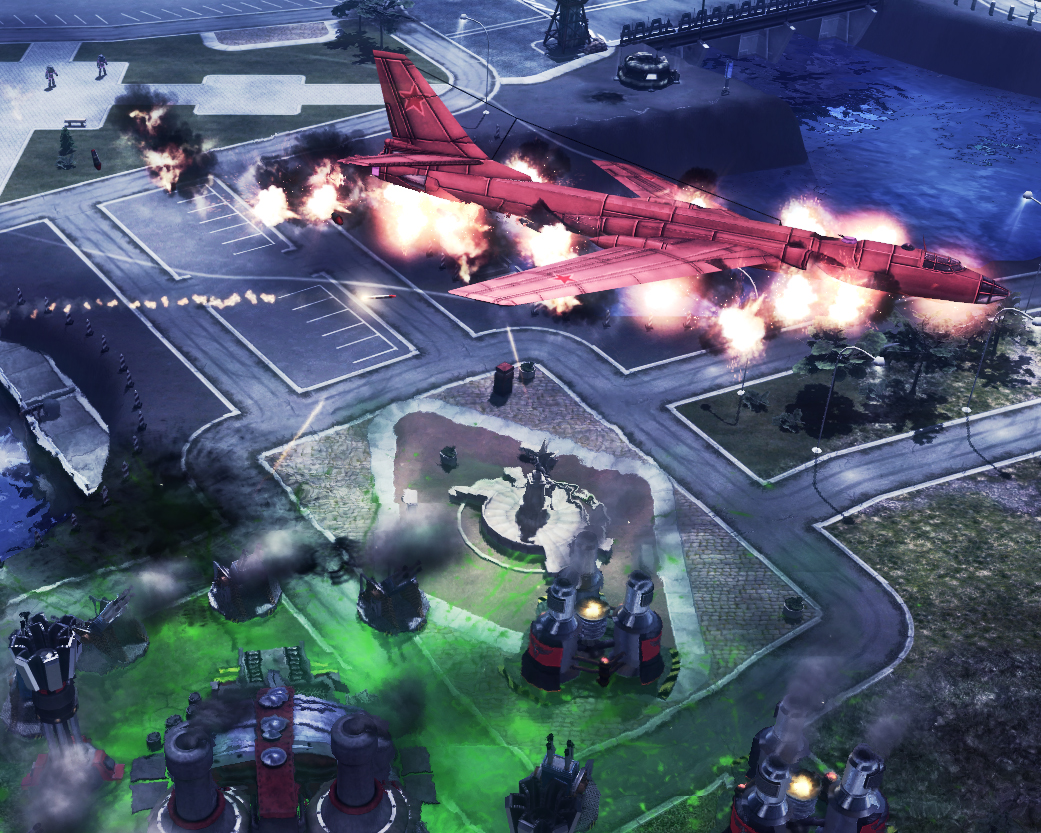 If the match still continues? pull the plug! the map that you are playing on is probably ridiculous!

Hopefully this article, together with the previous one, should have satisfied any questions you might have had about the Iron Curtain. However if you have any Iron Curtain questions that have not been covered here, feel free to ask below, and I will endeavour to answer you, at my earliest opportunity.

You can go crush capitalism now!

The escalation mechanic sounds awesome, are you going to make an article on Allied escalations too?

There are no Allied escalations at this time. If there was ever another major release, then I am sure there would be!

Escalation sounds cool, but will there be an option to lower the Escalation Tier timers by certain margin? Because I rarely go over one hour in play time even with AI opponents.

Sadly there is not, although release 7 had lower time requirements for level 1 and 2.

What about research done from superweapon that immediately unlocks the escalation tiers but demands a lot of resources?