I interview Wolfire's Jeffrey Rosen. A good read, if I do say so myself!

I recently had the opportunity to interview Wolfire's Jeffrey Rosen. Wolfire is a tiny, up and coming indie studio founded by two twins: Jeffrey and David Rosen. Their first major game is the upcoming Overgrowth. You can see a video of some of their concept art creation process below, created by Aubrey Serr:

Me: Jeff, thanks for taking the time to do this with us. I know it takes a long time.

We hope we don't bore you with our questions, though we're eager to know the answers.

Of course, I’m always available. One of the more unusual aspects of Wolfire is that we are totally open with the community. We give out our personal screen names on AIM, etc. and people can talk to us directly on Wolfire.com.

What do you think that your most notable achievement has been in the development of Overgrowth so far?

Well, first let’s talk about what we have so far. We’ve embedded Google Chrome into Overgrowth, we have a kick ass terrain engine, and we have a really good integrated map editor. Also, we have initial multiplayer support as well as countless miscellaneous things that I could list forever: dynamic shadows, a cool sky engine, etc. The most technically impressive aspect is our “off the grid” terrain engine, though my personal favorite is the fact that we have access to Google Chrome in an OpenGL context.

I'm interested in what Google Chrome does for you.
How does it integrate into the game?

Google Chrome is very important to us. Google has taken the WebKit rendering engine and abstracted it so that it can be rendered into an arbitrary context. Adam Simmons, a.k.a. AJS in Wolfire IRC is the man behind all of our Chrome features and he has basically taken Google Chrome and hacked it so that it renders to OpenGL. This is huge for us because we can use standard, tried and true web technology to make our UI. It’s great for our workflow because I can whip up normally complicated UIs like a map editor in no time at all, and it looks beautiful! It also makes modding much easer. WebKit can be used to make virtually any UI needed.

This also enables us to integrate web applications into the game. We’re working closely with wegame.com, so you can record and watch overgrowth videos without ever leaving the game. We’re also working with some mystery companies that I cannot reveal right now—I could talk about WebKit forever, since I do most of my work there, but let’s move on to some other cool stuff.

In one of the many threads in the “Secret Preorder Forum”, you said that you had to change your estimate for the completion of the game from Q1 2009 to Q2?

Basically, it’s just an estimate and software development is notorious for taking longer than expected. We chose Q1 as an arbitrary date to give us something to work towards, but it quickly became apparent that Overgrowth is too epic to fit into that timeline and we try to be as accurate as possible.

When do you think we might begin to see gameplay in the weekly alphas?

I don’t like speculating on timelines, because like Q1 to Q2, it always comes back to haunt you. I will say that we’re almost done with the terrain engine and most of the features of the initial map editor. This means that we’re going to be able to focus on animation, which is the first step towards combat. We’ll make a ton of noise on our blog (http://blog.wolfire.com) as soon as we have something we think is playable.

We are greatly inspired by Mount&Blade and Cortex Command, where the authors sell the game before it’s done. As an independent studio without any investors, the second we have something that you can play, you can bet that we’re going to go wild with it.

You've mentioned that movement and combat would all be mathematically determined. What does this entail?

We are working on a pretty sweet procedural animation system. Basically, instead of hard coding important animations like running, climbing, and fighting, they are determined on the fly, so it looks very smooth and natural, depending on a bunch of variables.

A little history of the procedural animation system so far.

Does this mean that custom combat moves could be accidentally created, should the user do a weird combination of movements?

It's going to be like Lugaru where you will have a set of basic moves, but the fights will always be completely unique, since it's physics based, rather than hard coded. Expect to see a lot of ragdoll physics and fancy procedurally generated animation.

Can you give any information as to what all of the races are?

You’re already familiar with rabbits and wolves from Lugaru. In Overgrowth, we’re happy to introduce you to a number of new races. There will be cats, rats, dogs, and maybe some other animals. In addition, there have been some rumors of a whale man, which I will neither confirm nor deny.

Do all of the races have different abilities? If so, what are they?

Well, Overgrowth takes place in a very rich, expansive world, so it’s hard to describe each character’s details. Let me give you a 30 second pitch. Rabbits are very weak, but nimble creatures. Wolves can crush them very easily and rabbits excel at running away. Turner, the main character, is a rabbit, but despite the fact that he is a scrawny rabbit, he is able to destroy even the most powerful enemies with his bare hands—it’s up to you to figure out how, though.

Rats like to hide and fight in groups, while cats are proud and don’t like to fight—but when they do, they tend to have the best, fanciest gear. The story will explain this in a much greater detail. Wolves are more proud than cats—more like stubborn. They refuse to use weapons and armor, and dismember their enemies the old fashioned way. Dogs are, in a sense, weaker wolves but are a lot more organized. Of course, the whale man, if he exists, just walks on things he doesn’t like. 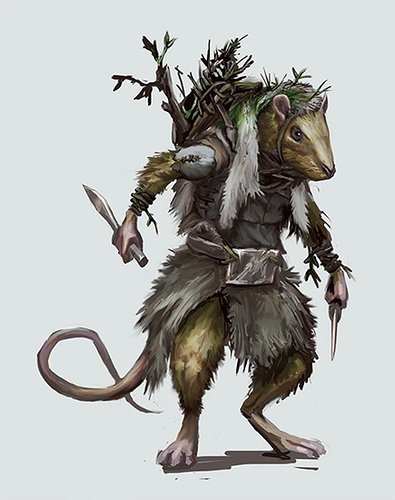 So will players be able to play as a rat? If so, could they, say, form a group?

We haven’t decided on that yet. In multiplayer and in mods, for sure. However, I cannot comment very much on the single player campaign in Overgrowth other than that we have a ton of concepts for it and it is going to kick ass.

Aubrey Serr, our artist, is an amazing guy. Everything he comes up with is gold. Recently he sent me a sketch he made for a dog graveyard level that I thought was particularly cool. It’s incredible to be working with someone like him. He is so prolific that he makes me feel lazy, even though we all work pretty much non-stop.

Let's talk about mods. Will players be able to completely deform the game?

Absolutely. We’re really excited about the mods feature, and we’re heavily banking on user made content. As an indie game studio, we don’t have the resources to create eight hundred hours of gameplay, like a JRPG or Metal Gear Solid 4. However, we do have a ton of enthusiastic fans who would love to help, given the opportunity and the right tools. We’re trying to make modding as easy as possible, like LittleBigPlanet. But more importantly, and where I think LBP failed, is we have an awesome system in the works to let people share and discover mods very easily. It’s sort of like the iTunes App Store, built directly into OG. Thanks to WebKit, this can be done surprisingly easily.

Our goal is to let a new Overgrowth player discover and play a new mod in two or fewer clicks. My dream is for someone to start Overgrowth, immediately see on the main menu “New Mod by Silb: Overgrowth Temple 4.5/5 stars” and then click a little play button next to it, and bam, they are in the mod. This sounds a lot like designing a web page right? That’s because it is, just a different application. 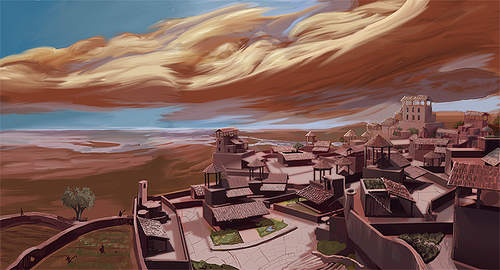 Could a player create a gun that shoots fishing hooks, which then exploded?

I don’t want to comment too specifically on what can and cannot be created, but that might be possible. It sounds like it would be effective against a whale man.

Jeff, can you tell us if there will be more moves than the original Lugaru?

Oh yeah—tons of moves. Let me just end with this. My twin brother, David Rosen, made Lugaru as a summer project in high school totally independently. Overgrowth is being made by five of us working more than full time for as long as it takes. Please don’t think of it as just a sequel to Lugaru (although that would be awesome by itself). This project is so much more ambitious than the original game that we’ve actually changed the title so people don’t get confused, which is somewhat confusing.

Thanks for interviewing me!

Interesting read, and quite awesome the implantation of Google Chrome, I'll have to keep watching this as I'm still becoming impressed over it. :D

aweosme, very cool to se how u guys do stuff!!

Everything that I read and see about this game makes me want to buy it more and more. *Drool*

"eight hundred hours of gameplay, like a JRPG or Metal Gear Solid 4"

Surely you mean 800 hours of cutscenes ;)

The game is looking great. Impressive on both the technical and artistic side of things. Can't wait to see how it turns out!

if the whale man isn't the game, I expect to see a mod that has a whale man lol :D

Very nice interview! When he first starts talking about Chrome I wasn't quite sure what to think (in game browsing? Whah??), but he explained it very well and now I can see the possibilities. This just moved up higher on my most anticipated of 09 list!

That guy is really good at photoshop