Inns and their function in our modification. The concept made by Owen from our team. 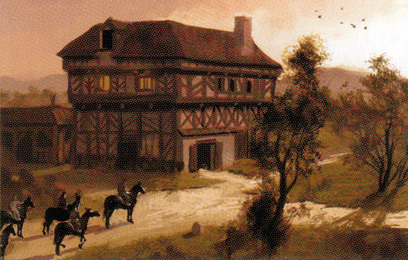 The concept behind inns is to spice up the world map with new sights besides villages, castles and towns. Inns were born out of a need not only to fill in some empty map space but also offer a convenient pit stop for players running low on supplies, running form bandits, or in need of a place to stay for a day. They will be situated along roads in between towns, complete with their own names and, if times permits, their own characteristics. I think that this system of Inns could give the mod that special something to distinguish it from other ventures. But that is just my opinion.

The idea of Inns is to function as neutral settlements that will not be attacked or sacked by hostile parties. While this may seem ridiculous considering the country is at war, it was felt that convenience was more important than meeting realistic expectations. As these inns function as independent enterprises, they will not care who you are fighting for so long as you can pay for your room and board.

Besides providing the players with a safe place to stay, inns will also be filled with mercenaries looking to sign up for caravan duty or join the armies of lords. This could even explain why these inns have not been torched by the first band of marauders to come upon it. Special merchants such as smugglers might also be added as regular patrons, as well as prostitutes on the lower rung of the pecking order.

To start things off, I conjured 5 names for inns for every region in Westeros with the Westerlands and Crownlands joined together. I do not think we should do 5 per area, just that these are the choices presented. Now, these came off the top of my head and I can consider the matter further if some of the names are not useful.

(Which inns there will be won't be told, and will be kept for you to find out once the mod is released!