Post feature RSS If I Made Zeran's Folly As A Business

How the game would have been different if I made it as a business instead of as a hobby.

I've been reading things lately about how indie devs shouldn't expect to make money if they don't set out to make money. Don't expect to make money off a passion project--follow market trends, do market research, and basically reduce making your game to spreadsheets and following a checklist. While soulless, it is true. If you make games to exploit the market, they will sell. How else would you explain the inexplicable countless clones and popular shovelware?

I'm making Zeran's Folly as a passion project. full stop. There wasn't a single decision I made with the rationale of "this would sell better". As a result, the game is weird and doesn't have a lot of widespread appeal. I have no pretensions about it ever becoming successful or even popular, even if it did have a following or marketing.

Anyway, reading those articles led me to a neat thought experiment: how would I do things differently if I were making Zeran's Folly as a business instead of as a passion project?

Reduce it to an ESRB "E" Rating Have a happy romantic subplot 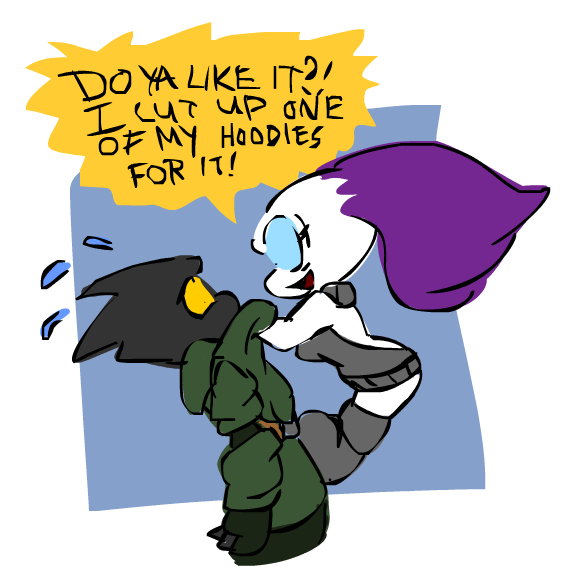 People love their romance and love subplots are shoehorned into almost everything. Throughout the game, Abby makes it clear she wants some dark-gray dick and the girls talk about how romantic it would be if Lone would sweep her off her feet. Spoiler: he never does. Lone likes his friends and adventuring, but that's about it. Abby's love is unrequited and she's basically friend-zoned. If this were a profit-driven game, you can bet your ass they'd be getting married at the end of the game with Lone down on one knee. Which brings me to the next point: A common theme throughout games and hell, literature and human society as a whole, is men's subservience and deference to women under the guise of chivalry. Mario dies countless times to save the princess, Link spends almost every 3D game taking orders from a woman to save a woman. Dads on TV are always brainless idiots and the moms are the smart ones keeping everything together. To know Jesus, you must know Mary first, for she is the way to Jesus. Women and children first.

You get the idea. The point is not whether all these are good or bad, but rather that's what the popular view (gynocentrism) is.

Lone is a man that knows what he wants. Several times throughout the story, female characters try to get him to back down from what he's doing for some perceived danger or threat. However, they don't go so far as outright shaming him (the thing men are most susceptible to). Despite their input, Lone knows what he wants, so he does what he wants. Whether it leads to bad or good is irrelevant. Lone always keeps his sense of agency.

There's a pivotal moment toward the end of the game where Lone has to make a choice. Everything points to his choice being a bad idea, and Abby pleads with him to reconsider. If Lone were a pussy, he would acquiesce and give up, ultimately making the wrong choice. But, Lone does what he wants, so he continues on. It's not about what Abby wants, it's about what Lone wants.

Since everyone likes watching men get their balls busted by women for some reason (whether through sadism or knowing that feel), a good marketable game would have Lone as a willing punching bag for the obviously-superior vagina-bearers. For all the bitching people do, game companies wouldn't do it if it didn't work amazingly well. Don't wanna grind for gelder? Spend $3 and get 20,000g! Buy this exclusive outfit for $5! You better believe there are countless assholes out there that would pay for that shit.

Get rid of the rock

Zeran's Folly has a weird soundtrack that's heavily inspired by rock and metal. It's not so much that it's weird, it's just unexpected. It's a cartoony medieval fantasy game, so obviously it should have a lot more classical orchestra stuff like strings, woodwinds, and brass. There's a little bit of that in there at the beginning, but it's a minority. Besides, a lot of people don't like metal or even hard rock much, even without the screaming. A good game would have music that matches expectations. This is a no-brainer. A good game would have a professional artist, writer, editor, composer, musician, designer, etc. I am none of those things.

Have Crafting and/or Zombies

Everyone else is doing it, so. Zombie himself doesn't count.

That's about all I can think of for now. Man this game is gonna bomb hard.