Post feature RSS How to Tell a Lie: Interaction, Information and Conversation in The Hit

Some side-effects of the interaction interface I'm working on: you'll be able to lie, tell if someone's lying (if you're observant enough) and get better at lying, both in single-player and multiplayer. Here's a few notes about that.

I have two main goals with The Hit: narrative depth and player freedom, or 'Story' and 'Agency'. I don’t mean that I’m trying to find some compromise between them; I consider them both absolutes. I want to tell rich and interesting stories without constraining the player in any way. Learning how to do this has been my focus for the last few years, and I think I’m very close to having a game which achieves both those aims. It’s still in development, so I can’t promise that you’ll be playing ‘Dark Souls meets Citizen Kane’ any time soon (I think I’m an okay game designer and a half-decent writer, but I mainly want to help push the form forwards, so that better writers can use the tools I’m building. For now, I’m aiming for something around the same narrative complexity as the TV series 24), but I think I stand a chance of getting close.
In other words, games aren’t currently telling stories as rich and complex as films or novels, but I believe they can, and I think I’m on the right track with The Hit, or else I wouldn’t have invested the last few years of my life in pursuit of this goal.

Grand goals and grander statements aside, I want to look at a simple component of many stories, and something which I don’t think has ever been handled particularly well in games: the lie.
Lying in game most often takes the form of an option within a dialogue tree, which means it’s presented to the player as a unique option at one moment in time. In order to be properly ‘part of the game’, it needs to be something the player is able to do whenever they like, not even just when it would be advantageous to do so. This means either writing a whole lot more dialogue (not the best use of limited resources), or making information itself into meaningful gameplay tokens. As the first option is not really an option at all (and I don’t want to fall back on using dialogue trees, because they come with their own set of problems), I’m going for the second [1].

Also, a medium where the actors are incapable of untruths is one which is incapable of making any statement about the nature of truth, and that is a significant failing of modern video games, not just of their narratives.

I should also note here that I did not set out to make a game where you could lie to other characters. My intention has been to make the simplest & most intuitive system possible, which also covers the largest amount of ‘narrative space’. Lying is essentially a side-effect of this system, and I’m now having to design entirely new subsystems to deal with the consequences of it.

A game can only tell a story about things with exist within the game in a meaningful form. Health, ammo and different weapons exist within almost every first-person shooter, and they are meaningful to the player because they effect changes to the experience of playing the game. The Templar organisation exists within the fiction of the Assassin’s Creed games, but doesn’t exist as a meaningful token within the game itself. In gameplay terms, the Templars are just another skin for the same enemies you fight in other parts of the game. Their existence frames the action and gives it context, but because it doesn’t exist in any shape or form within the game itself, it can never be part of the game’s story [2].

In order for the story to be something which the player can interact with in The Hit, I need some method of representing information within the world, and also interacting with it. It must also be fast, simple and intuitive, because ultimately I want to make something that’s fun to play. The whole point of making a player-driven dynamic narrative engine is to make something more engaging than the now-standard ‘gameplay with framing cutscene’ model, rather than as an intellectual exercise. I personally want to play games with more narrative ambition than ‘Mr Gun versus the baddies’, and I hope The Hit can demonstrate that literary ambitions don’t require making any compromises with gameplay.

This is not intended as a technical piece, so talk about the interface only in terms of how it functions. I’ll write a more technical piece to accompany this when it’s all working well. 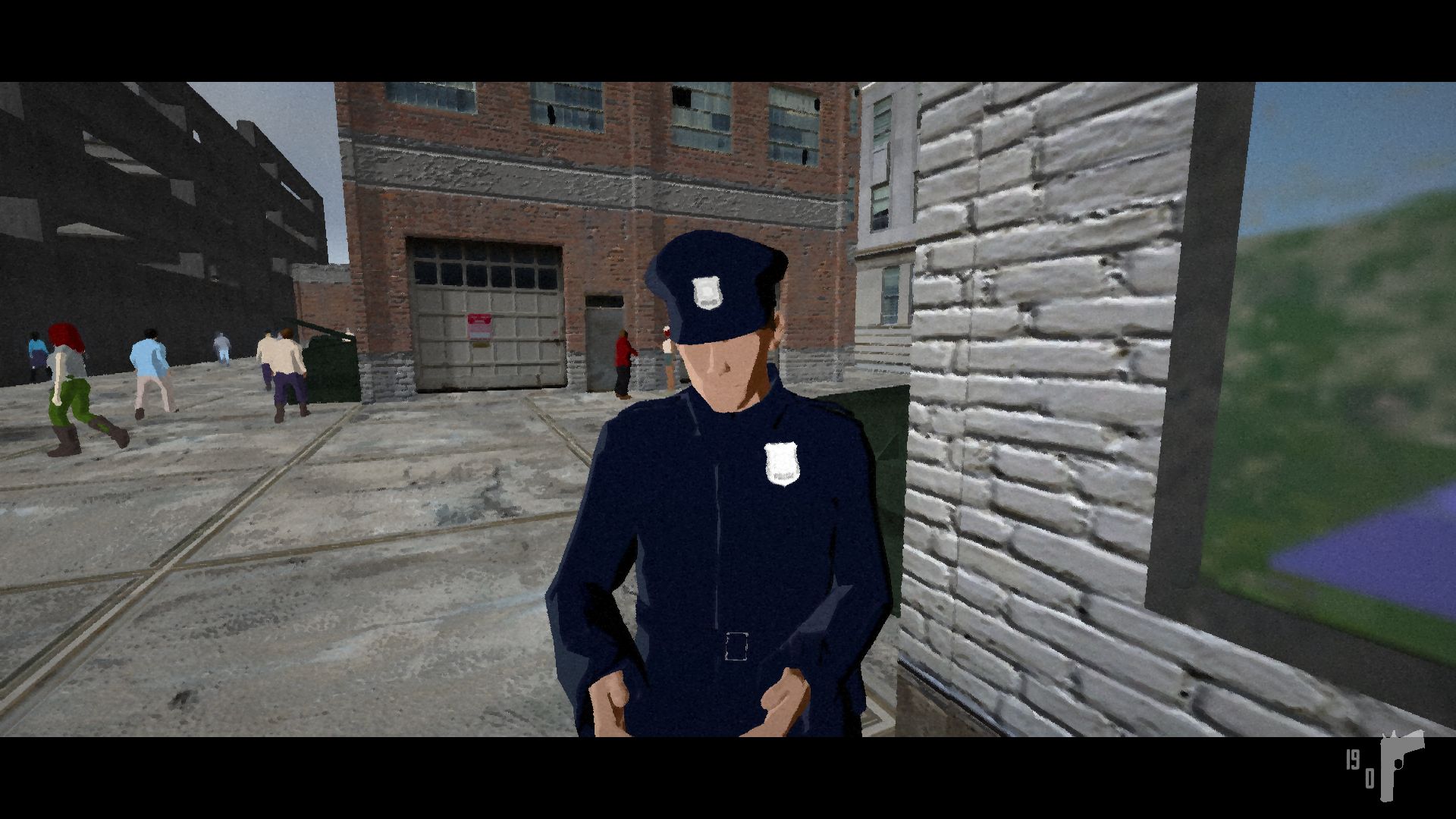 In short, anything potentially significant in the game world (objects, locations, people etc.) can be stored as a piece of information. The number of things you can keep in memory is fairly large, which can get (intentionally) unwieldy if abused, but the number of mission-relevant items will be small enough to manage easily. The inventory and memory systems mirror each other in functionality, which I’m hoping will go some way towards making the system more intuitive by emphasising parallels between physical entities and mental ones. Things can be ‘held in’ or ‘dropped from’ memory, ‘given’ to other characters, etc.

Depending on what the information is, it will also have associations, which are contextualised links to other pieces of information. For example, a person might have a job, a home, a family, hobbies, interests and opinions. If these are known, then the player can communicate these to other characters, and if not then the token becomes a question-mark, which the player can use to ask about them.

If the player is asked a question, they can answer it if they know the answer. For example, if another character requests (or demands at gunpoint) the location of a third party, the player can give them a location. Because every piece of information is stored as a token, the player can attempt to mislead the questioner by giving them incorrect information. Locations, like anything else in the game, can have traits, which can be compared against known information, so a false answer could be more or less plausible.

Remembered items and inventory items each have a physical location on-screen, with memories at the top and inventory at the bottom. When accessing memory or inventory, the player’s head is still moving, though to a lesser extent than in FPS mode. This means that it is possible to see when the player is checking for a held item, like a weapon, or a remembered item. If you are expecting an answer to a question, and the other character glances down slightly, that could give you a momentary warning that the answer to your question might be a bullet.

Also, examining a memory item for connections will take more time than accessing an item in immediate memory, and result in its own series of head movements. If a character is thinking overly hard about their answer, it might be an indication that they are making something up.

The next level in this game of deceit is knowing in advance that you could be questioned, and having an answer ready, which will usually involve some work to prepare a plausible cover story.
I’ve only tested this in part so far, and I haven’t done any multiplayer testing yet, but all this should still work over multiplayer.

This has just been a quick piece while I finish off the systems I’ve described above, but I’m planning to publish a more in-depth version over on Patreon, with some screenshots and possibly even a few gifs. I’m also going into hospital for some minor surgery on Friday 15th September, and I don’t know when I’ll be feeling up to writing that. If you’d like to support me, please head over to Patreon.com. I’ll make sure I put the latest build on there on before Friday, and I've got notes for the next dozen or so articles, so I'll try to get that updated fairly often.

Thanks for your attention,

[1] There’s another class of deception in games, which basically boils down to ‘pretending to be something you’re not’, usually either an NPC or ‘not there’, ie. the central mechanic in stealth games. While The Hit has elements of that, it’s not what I’m choosing to focus on for the purposes of this article.

[2] I know it’s kinda unfair to pick on any one AAA series, because they all do this. AAA open-world games themselves exist as two things: enormous, pretty, but ultimately shallow sandboxes, and brief contextualised games within larger stories. The story missions are no less shallow than the sandbox, but the framing device re-contextualises and gives meaning to your actions. They are the action-scenes to the narrative ‘blockbuster’.