Post feature RSS How to design efficiently for indie games

Based on my design process behind Kheera, the Shamaness – a character from our current project.

Kheera is a deadly Shamaness. She can serve well as a support in a group or go the solo assassin way, whatever play style you prefer. This is one of the characters that were featured in the prequel of Warlocks 2: God Slayers (our current project) - Warlocks vs Shadows.

Feathers, tattoos and daggers. These are the words I’d use if I had to describe her in… right, three words.

In the first installment of Warlocks series every character had only four skills (each with a boosted form when upgraded up to 5th level) in its arsenal. In the sequel we are going with fewer character but each one with much better customization options - skill trees. And this brings an entirely different set of problems to the designing process of characters.

Kheera was one of the harder characters to pick up for a new player, that’s because she’s actually the only one that didn’t have only four skills. She had seven of them, the most interesting one allows her to change forms, between offensive and defensive. And then there are three skills for each form.

In the first form you heal your teammates, spawn supporting totems and shoot magic missiles that boost when passing through an ally or your totem. In the other one you throw daggers, poison your enemies and teleport in silencing blasts.

So when the time came that I sat down to design the Shamaness’s skill set, the first idea that popped into my mind was that we have to keep her iconic move - shape shifting. Screw just keeping it, let’s expand on it! So I came up with a skill tree including three shape-shifting skills tagged as “ultimates”, which meant basically that you can only have one of those in your selection.

Each one would stand for a different play style, defensive, aggressive or supporting. Then each of those shape-shifting skills would have three additional upgrades, each one corresponding to one slot in that shifted form’s skill set. So when you transformed into a different form you’d disable your ordinary abilities and have three new ones based on the shape you picked and one to go back to your original form. That would mean animating additional 3 creatures controllable by the players. And that adds up to roughly ~30 additional frame-by-frame animations!

We already had a really tight milestone plan when it comes to animations so I decided to rethink that approach. We will have only five characters in the sequel so we have to choose the best cast of characters we can, giving players as many viable play-styles as possible. I decided that Kheera will be the most support-oriented character in the game, as she was in the previous Warlocks installment. Of course that doesn't mean that other characters won't have any supporting abilities - I already have a different Warlock planned out that should also be viable as a support in co-op.

And so instead of stance-switching we focused on her other skills - spawning totems, buffs and heals. Kheera can spawn two different totems - Totem of Wrath and Totem of Resistance. The first one buffs her and her nearby allies in an offensive way, by increasing attack and casting speed. It also fires projectiles at enemies. The second totem regenerates HP of allies in its range and buffs their armor and magic resistance. You can further customize the totems by spending learning points on various upgrades, like life steal buff or adding slow to projectiles fired by the Totem of Wrath. 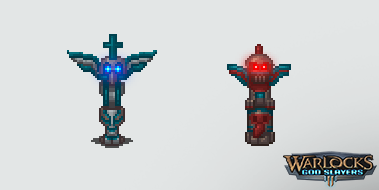 She also has (as of now) two "ultimate" skills to choose from. The first one is called Salvation, it instantly restores a chunk of hers and her allies' health along with a buff that you can customize with skill upgrades. The other one is a crowd-control supporting spell. Both of those benefit not only the party members but also Kheera herself - so they're not unusable in single player mode. Though there are many other skills in her set that might be better for single play.

In the end Kheera still throws daggers, poisons her enemies and heals her team-mates, but does it without needing to change stances (and more importantly without the need for animating countless alternate forms).

What is there to learn from all of this? Don't be afraid to change the parts of your design that you think are set in stone. Especially when they require a lot of resources to polish up - it's better to make something smaller and more polished than a lackluster and unfinished giant abomination of a game. After all if you want to make a living out of your passion / hobby, you have to treat it like a business - there are limited resources you have to take into consideration when planning out the next milestones for your project, money, people and time.