With sooo much info, I don't see how this would fit in a normal news post without cluttering the front page. So here are all the release notes!

Well,
I know it has been a long wait but there are large lists of new stuff
to go through. First, there is no changelog, just the changelogs within
later test versions are pages long. So sorry, but no changelog. The
current unit guide is obsolete, I have to write a new one up. Some
animations are still a little goofy, that'll get fixed eventually. Is
it balanced? Probably not, then again nothing else is either. The site
is in need of an update? yes, working on it. Now that is out of the
way, why did this take so long?

Much has happened in the time
that I had last made a release, I have a real job now and I am no
longer that goofy college kid. I even moved to a new state and work for
a fairly large company. Well to be fair I would have released back in
December but I was ill for 3 months 2 weeks of that was spent bouncing
in and out of the E.R with indescribable head pains and vomiting.
Hopefully the likes of which I will not experience again. If it wasn't
for my dad and panda, I don't know if I would have made it through.
Tons of shots and pills later I have recovered. It is all a very
exciting time for me, filled with challenges and even with the
unfortunate things, I welcome it all.

So where does that leave
gundam? It doesn't leave, I am still chugging along on this project. So
no worries, all those changes can come and at the worst gundam will hit
speed bumps. Gundam is a project that is hugely important and I will
continue to work on it to my best.

In the past year gundam
also has had another dramatic change. For those of you not in the know,
gundam has a team now! Realizing both an interest and the ability to
accomplish difficult tasks I asked KDR_11K to join me in the
development of gundam. He said yes, has made great contributions to the
project and continues to help fulfill the vision of this immense
project. Be sure to give him a shout out if you see him, without his
efforts I would not have been able to make as much progress as quickly.

So enough warm and fuzzy, lets get to what you are here for.

-- Basic materials
are your generic sheets of steel, 2X4s etc while nothing builds more
basic it is the "assumed resource" that is brought in through supply
lines and consider so fundamental it is simply supplied. There is no
way to boost it, it is hard capped to around your max starting storage
and produced at a steady rate.

-- Refined materials (yellow)
represent the production of complicated machinery components that must
be done on site due to size and transport constraints that come with
such advanced machinery. Each faction has this done in machine shops.
To produce more you will need to use basic and power, so use caution if
you over build too early you can hurt the ability of your base
expansion.

-- Exotic materials
represent complex and delicate machinery such as beam rifles or
advanced computer components. It is produced at the research facilities
and will use refined resources and a lot of power to produce. Spend it
wisely.

-- Power,
is your power grid, attacking a player's power can shut down their base
all together leaving them impotent. So guard it wisely, one of the
first things you lose when losing power are your base defenses. So
protect your power. You can produce as much as you need but be wary of
too much as losing it can be that much more crippling so watch how much
defense your base has.

-- When constructing a building or mech the cost is taken immediately instead of over time like the prior version.

--
If you over build machinists too early you will cripple your base
construction. The trade off is late game when you have all your
production maxed out and you resources are no longer needed for base
construction you can entirely focus on combat units.

This
was added because players were all too quick to try and go right to the
top tier units. A natural and understandable behavior, why build a
C-level unit when you can have an S-level right? Well the C-levels are
useful and people were often times only winning with S-level if they
got lucky.

This also locks off units that if they were
available early game would mean a rush defeat(doms for example). It
allowed me to make them affordable and still have them readily
available late game.

Rather than use the annoying building
based tiers I wanted more of a tech progression. In time this concept
will be explored more, right now you guys have the beginnings of a much
larger planned system. While it is the beginning it may not make sense
just trust that it is part of a much more interesting planned future.

The
research tree right now is linear but that will change in the future.
For the time being these are the tiers and their unlocks. 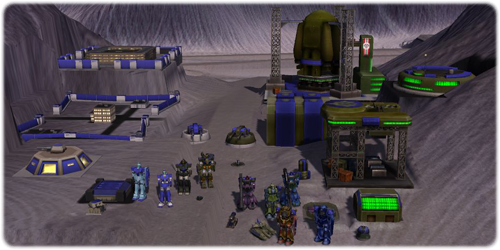 Sniper custom - a sniper unit that when moving uses a beam spray gun.

vulcan truck - high dps vehicle, it has paper thin armor though, so once the enemy closes in expect it to die.

both
Pop-up Turret
- federation - armored turret that has to reload each shot, has armored state when closed.
- zeon - stealthy turret which requires units to physically spot it.
lite
ground turret - small turret that can be placed in those hard to reach
spots. Concentrated fire is quite deadly and they are great for putting
in those back entrances that units like to sneak up to.

Armored turret - heavy turret only buildable by your commander. you have 4 of them, use them wisely.

Conyard - used to extend the buildable area of your base. Set one up and you will quickly have a forward base.
- federation - an armored building with lite defense turret.
- zeon - an unarmored yard with crates, has a repair pad for aircraft

Commander
building - A large starting structure representing either a central
administration or a major supply storage. It is you central building an
if lost cannot be rebuilt.

While I am not sure what changes are new I want to once again go over the weapons and the things that I know are changed.

first
and foremost, sniper units(units with sniper in their name) only fire
while not moving. There is one exception, the sniper custom which uses
a beam gun when moving.

Artillery units and missiles get bonus damage vs buidlings.

Machine
guns get no bonus vs anything. However, the shots are still effective
beyond the unit range, meaning that if the shot misses a unit, it will
still travel a bit making it possible for it to still hit something.

Beamrifles are good against everything.

The beam spray gun used by the gm does more damage up close.

Many units have less accuracy when moving.

accuracy
is a theme now with lesser mobile suits for example from least accurate
to most accurate: Zaku1 -> Zaku2 -> rgm 79. What does that mean?
well the zakus will fire but miss a lot against a single unit. However,
when in a large group, they cover a large area, virtually having aoe.
This makes them more effective in a swarm. Keep this in mind when
attacking with the units that there are abilities like this.

-
Kill the enemy power, turns off most of the base short of conyards.
Even though they can rebuild, it is hard to do and takes a long time to
recover from.

- build a construction unit. It has the ability to
make conyards. This means the enemy cannot lock you out of production.
Try and hide it somewhere, as long as you have a conyard or a
construction unit, you are still in.

- even if your base is
fully built and you no longer need to construct more buildings, let
yourself build up some basic. That way if the enemy quick hits your
power you can try and recover quicker.

- some units cannot take hits but do a lot of damage, use decoys to sneak them into the enemy base.

- the small turrets are cheap a few scattered around the base esp in your rear can be invaluable.

-
transports are awesome. Zeon and federation players, use your flying
transports. Nothing like a zaku sniper on dodai ys or say airdropping a
fag.

- don't TEK2FAG, in the normal course of a game you can
earn one, you need units for defense. Turrets are good but your mechs
are better, turret are just support.

- don't be afraid of using zaku1s or t61s as damage sinks, they will get some hits in.

- Special thanks -
lurker - for dealing with my constant rage.
peet - for all the cyber.
rattle - bitched me out until I started using proper normals
regret - because HE WAS THERE, IT IS CONFIRMED

Wow! That's quite the post you have there! Looks really impressive. Can't wait to give it a go!

Ok your no longer a tease I take it back now..... but are you sure it wasn't you who lost the game.

Good job Smoth, gonna go check this out :). Hopefully I'll have a better experience this time since last time I was a bit noobish and impatient.