The glossary of the terms used at Ace Combat 7 skin modding. 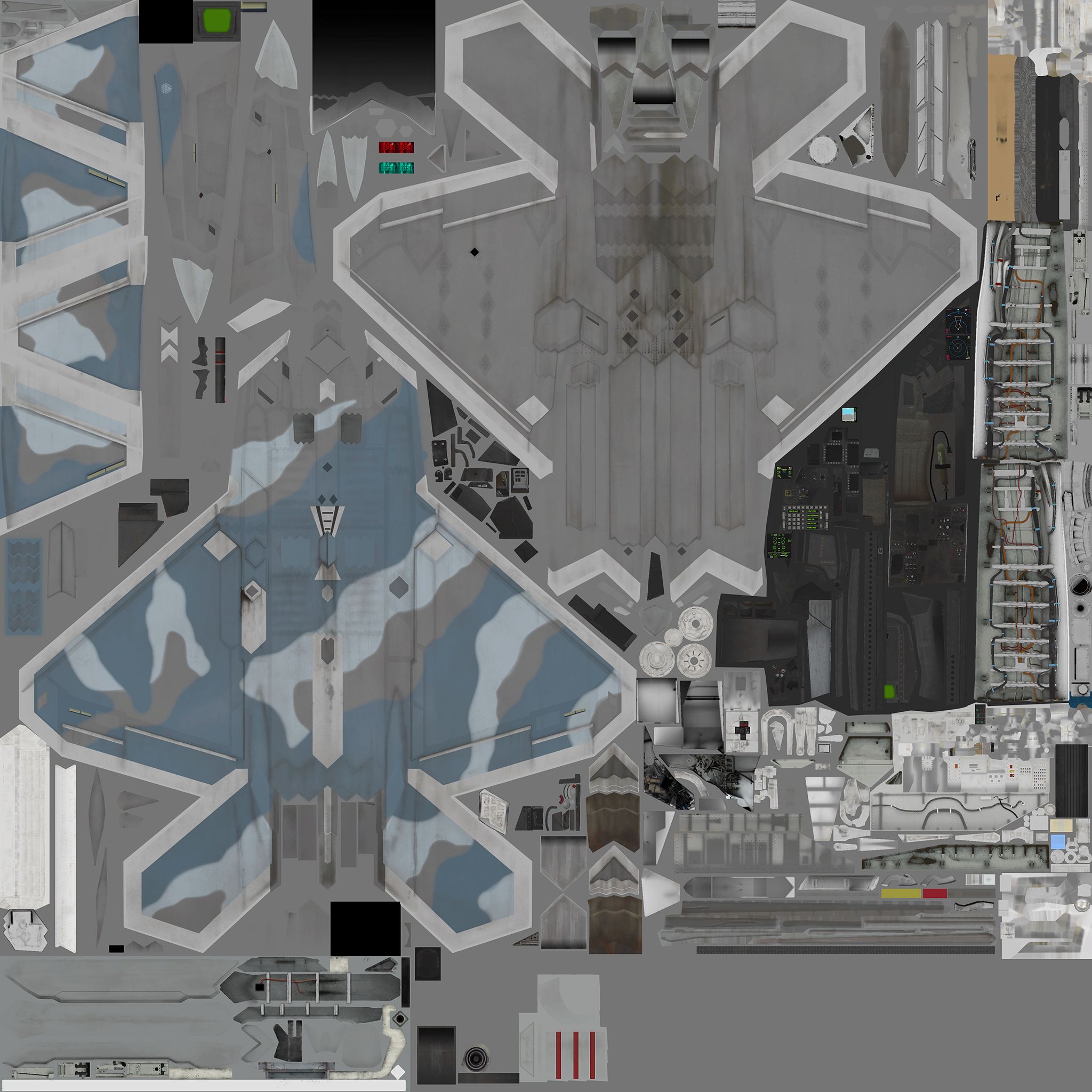 The main type of texture used at the gaming industry since the beginning of the 3D era, the map is also refered as 'Albedo Map' on the PBR system(d̶o̶ ̶n̶o̶t̶ ̶b̶e̶ ̶c̶o̶n̶f̶u̶s̶e̶d̶ ̶w̶i̶t̶h̶ ̶a̶ ̶c̶r̶a̶z̶y̶ ̶w̶o̶m̶a̶n̶ ̶w̶h̶o̶ ̶s̶t̶a̶l̶k̶s̶ ̶a̶ ̶s̶k̶e̶l̶e̶t̶o̶n̶ ̶w̶h̶i̶c̶h̶ ̶i̶s̶ ̶a̶ ̶d̶e̶m̶o̶n̶ ̶l̶o̶r̶d̶ ̶m̶a̶g̶i̶c̶i̶e̶n̶), getting a different purpose for highlighting the colors of the model better without any sort of wheatering, the later managed by the other groups. But the main principle of the Diffuse map will be always begin the texture with all the details baked. 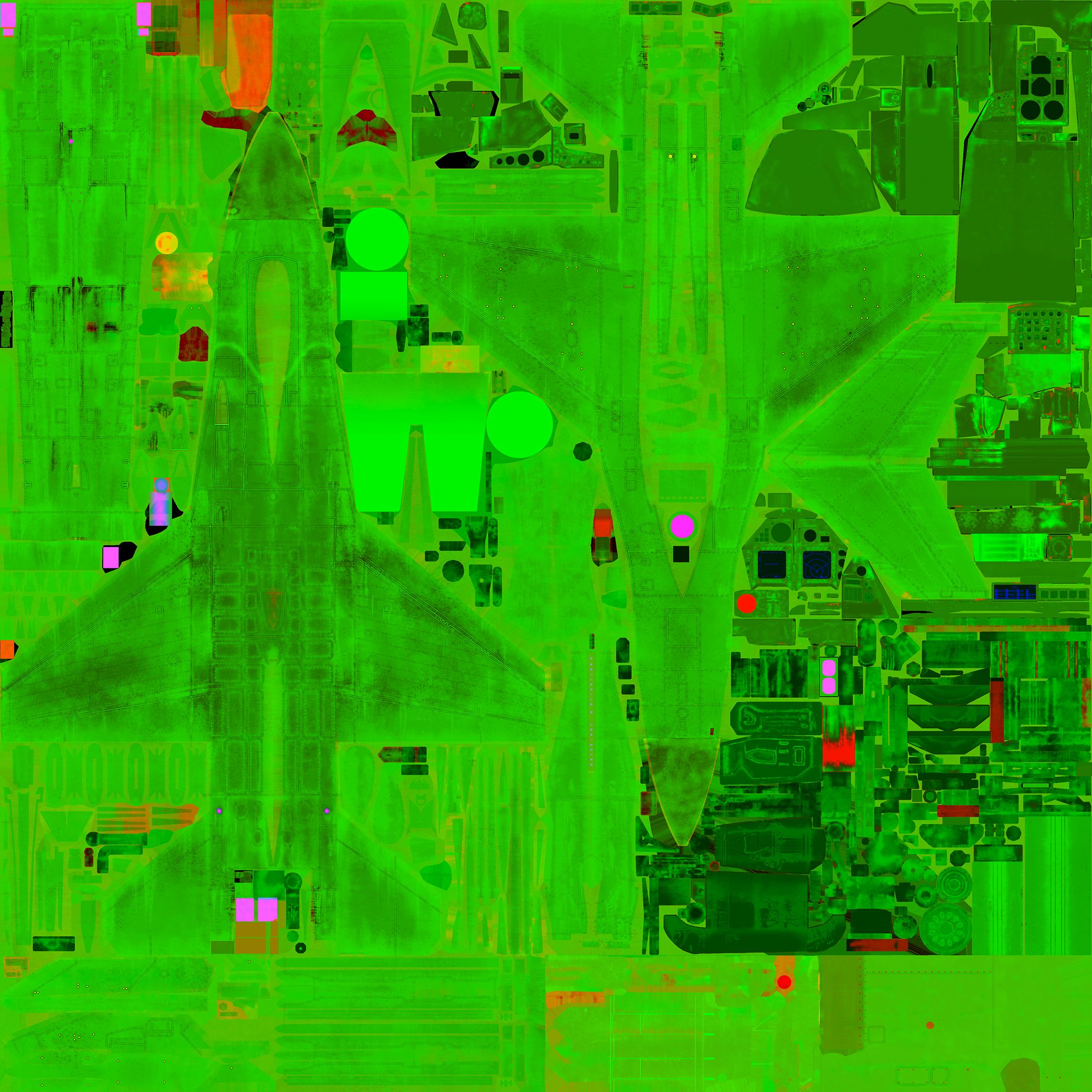 MREC is a texture map exclusively used by Ace Combat 7, at first sight, it may look really scary by the vivid colors and lack of explanation of the same, but analyzing it deeper with experience, you'll be getting used to it, MREC is a example of what we call PBR system, at earlier games and 3D modeling from the time, the way at applying metallic and glossiness on a model would be handled by separate materials with textures, or by a map called "Specular", Specular handled most of those propreties at the same texture by monochromatic, or colored adjustments. With the time, this system improved at allowing to manage each state separately into each texture file, by UE4 and Blender supporting this system, one of the main bulletpoints of MREC composition turns at merging the essential maps into a single texture using the RGBA channels, which is the magic behind of his unique appearance. 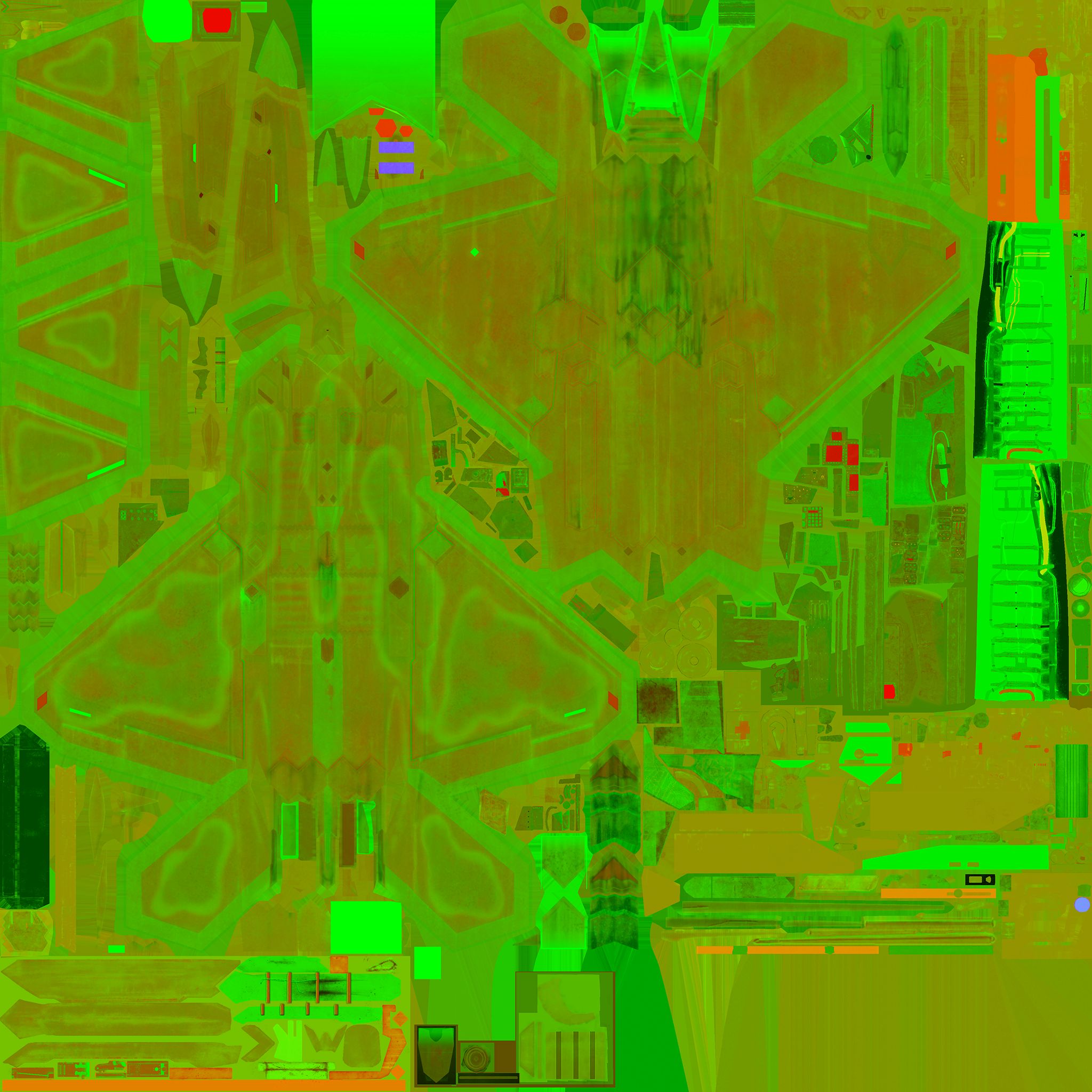 MREC map with Metallic propreties assigned on the aircraft. 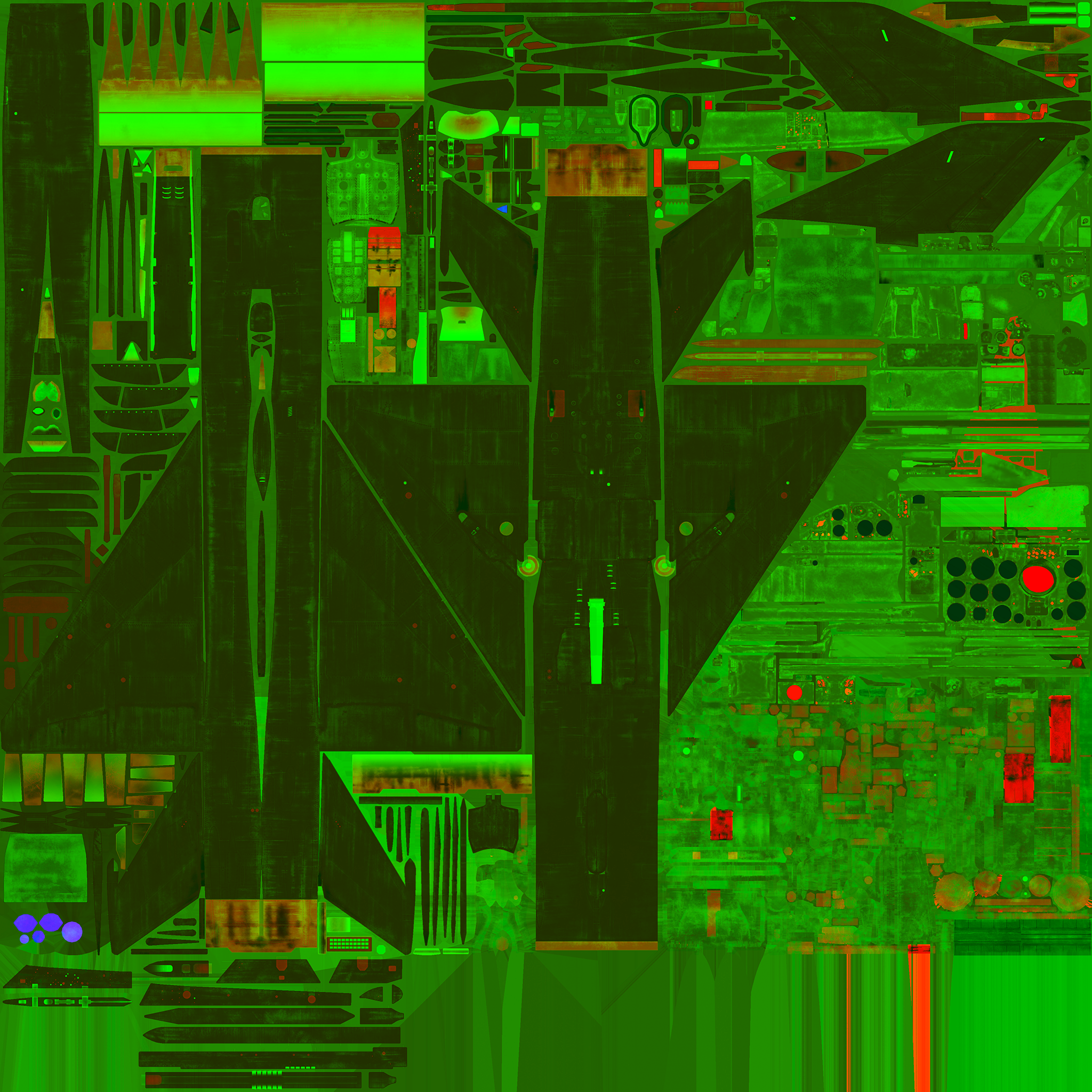 MREC map with Glossy propreties assigned on the aircraft. 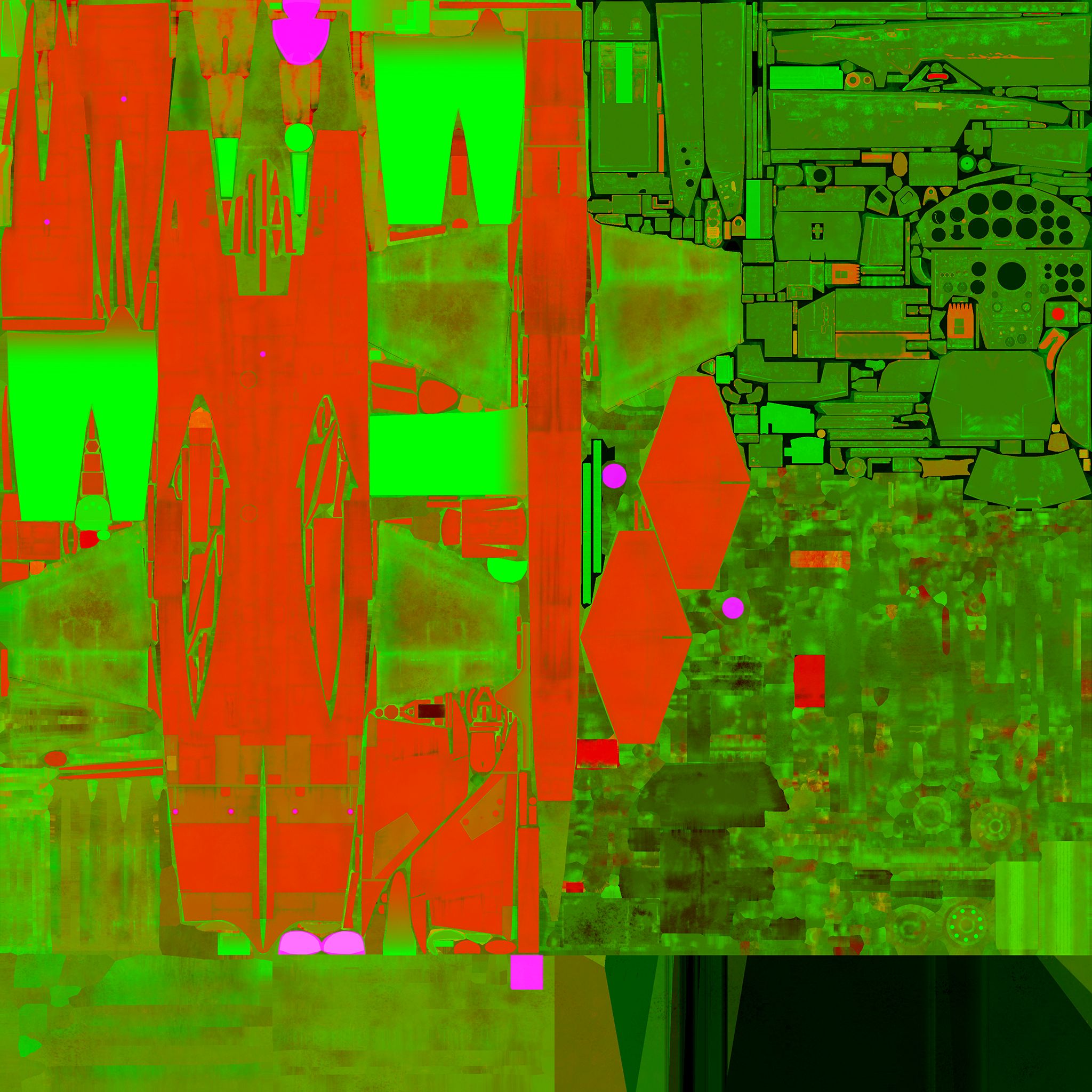 MREC map with Metallic and Gloss propreties assigned on the aircraft, making it chromed.

The MREC texture, which also makes the composition of his name, is composed by the following monochrome textures : 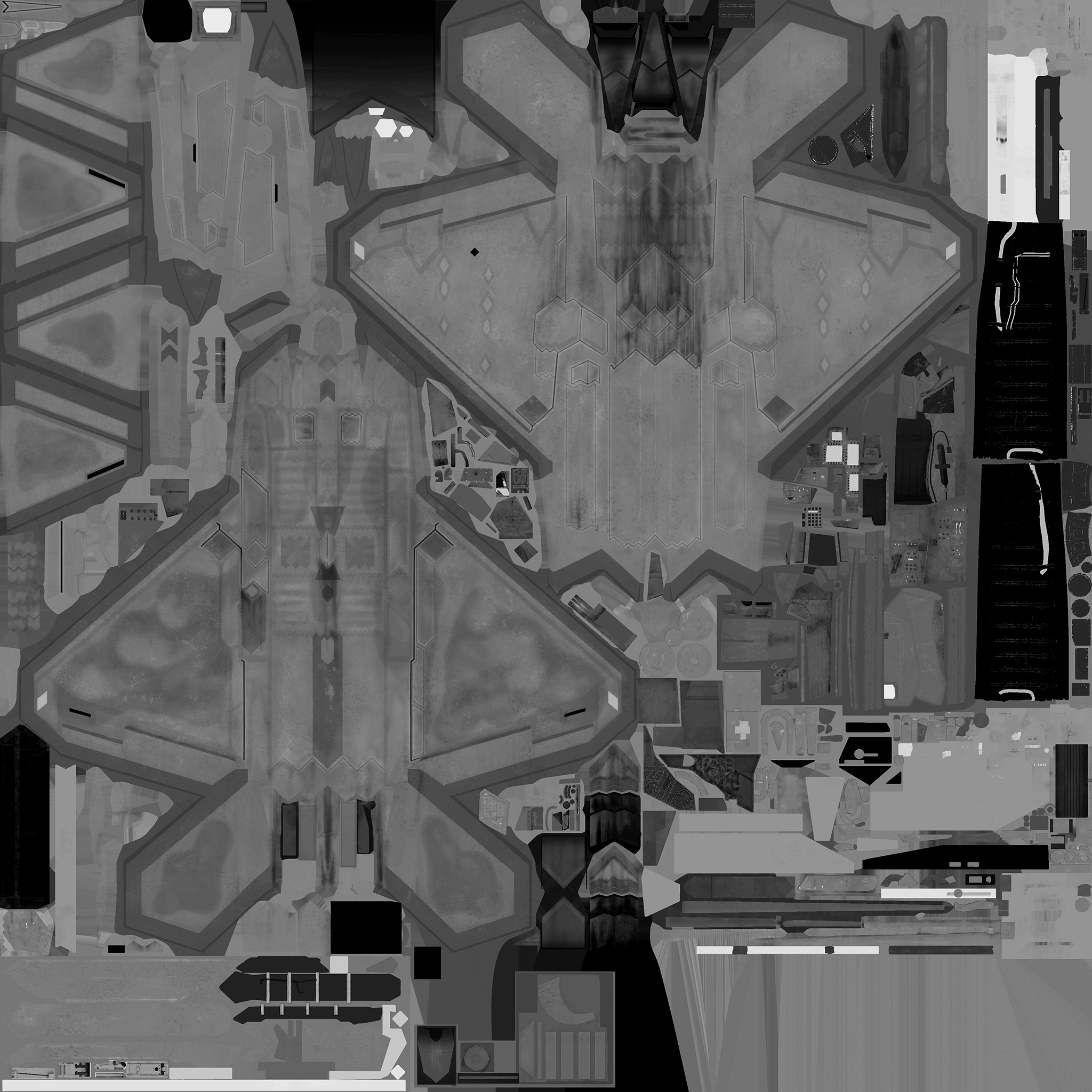 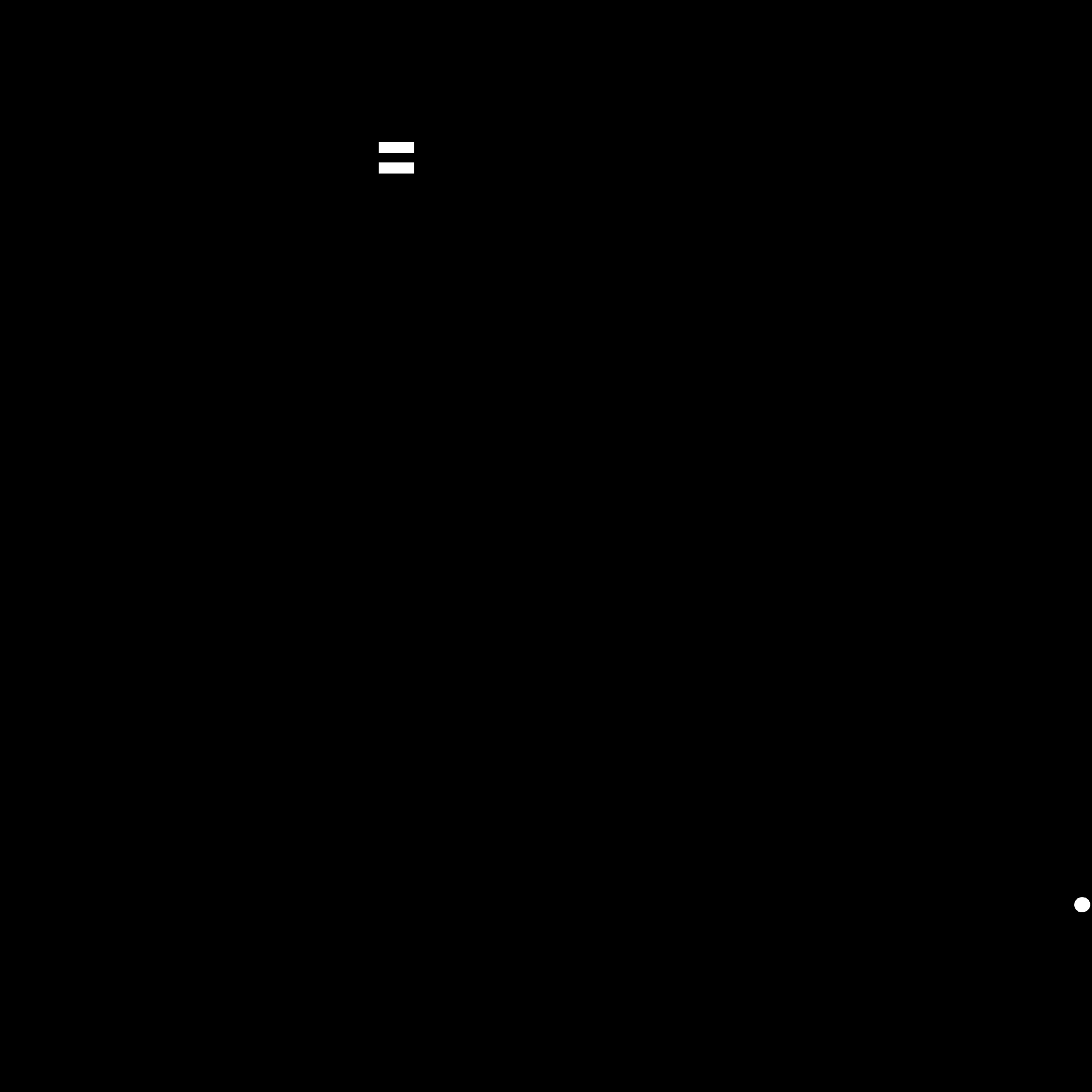 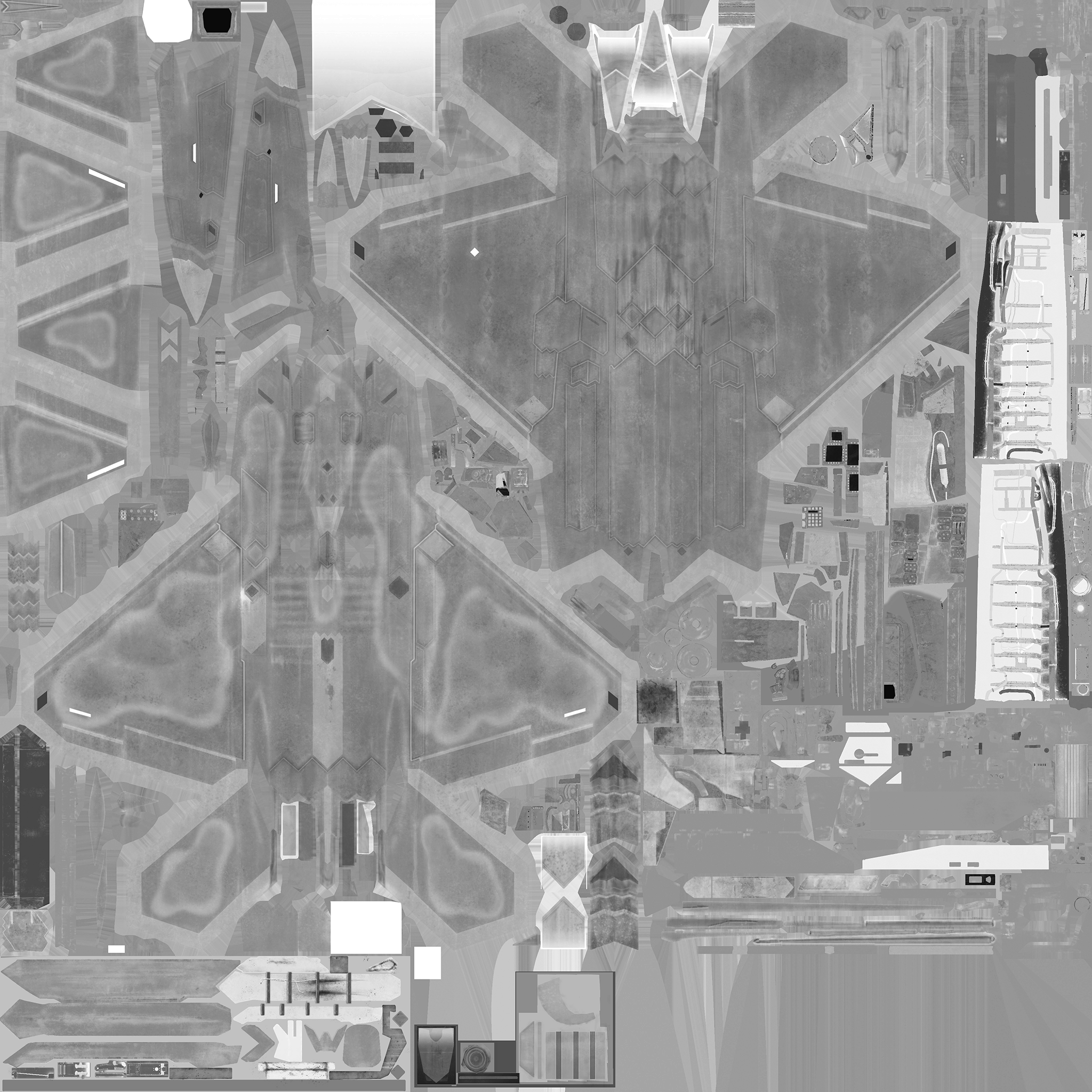 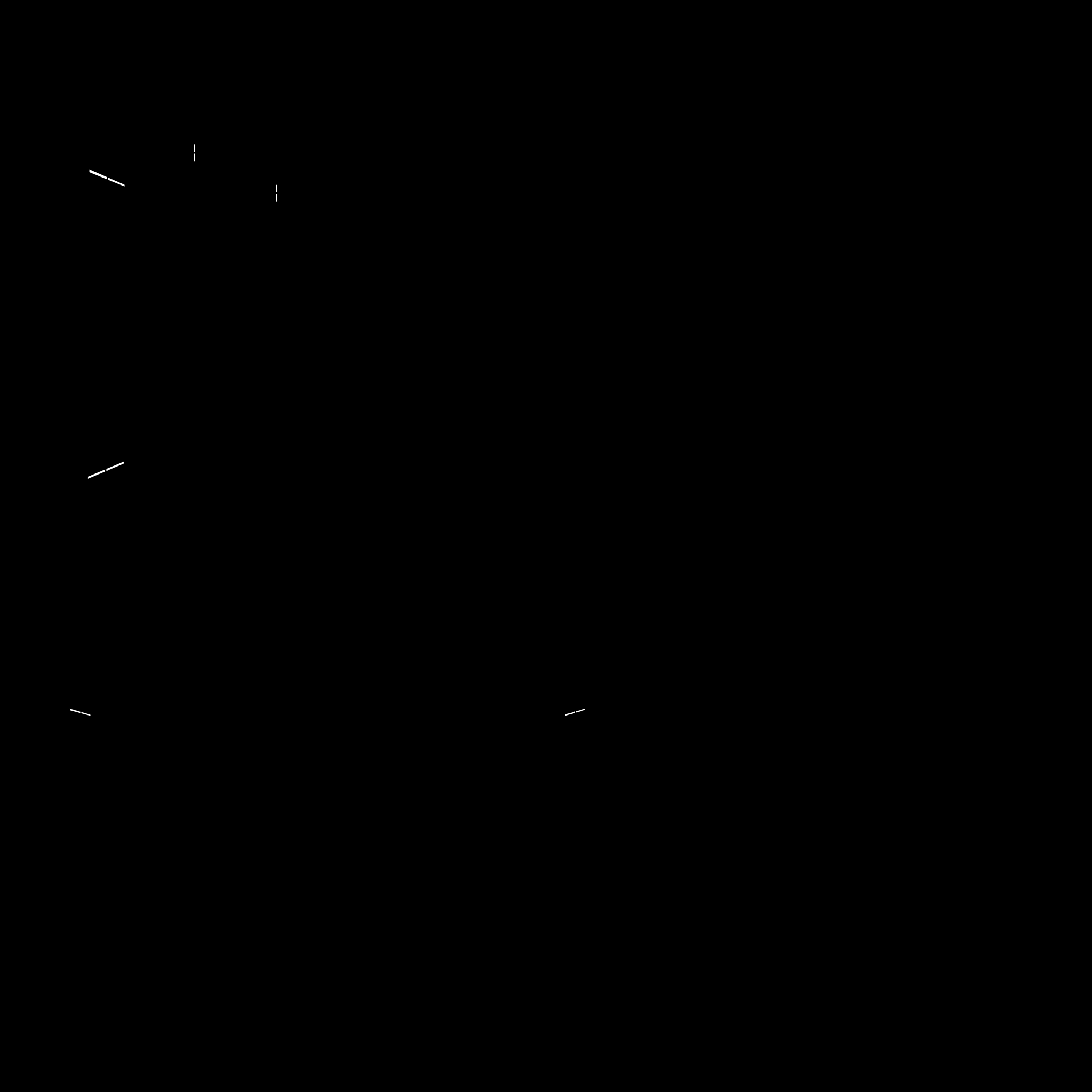 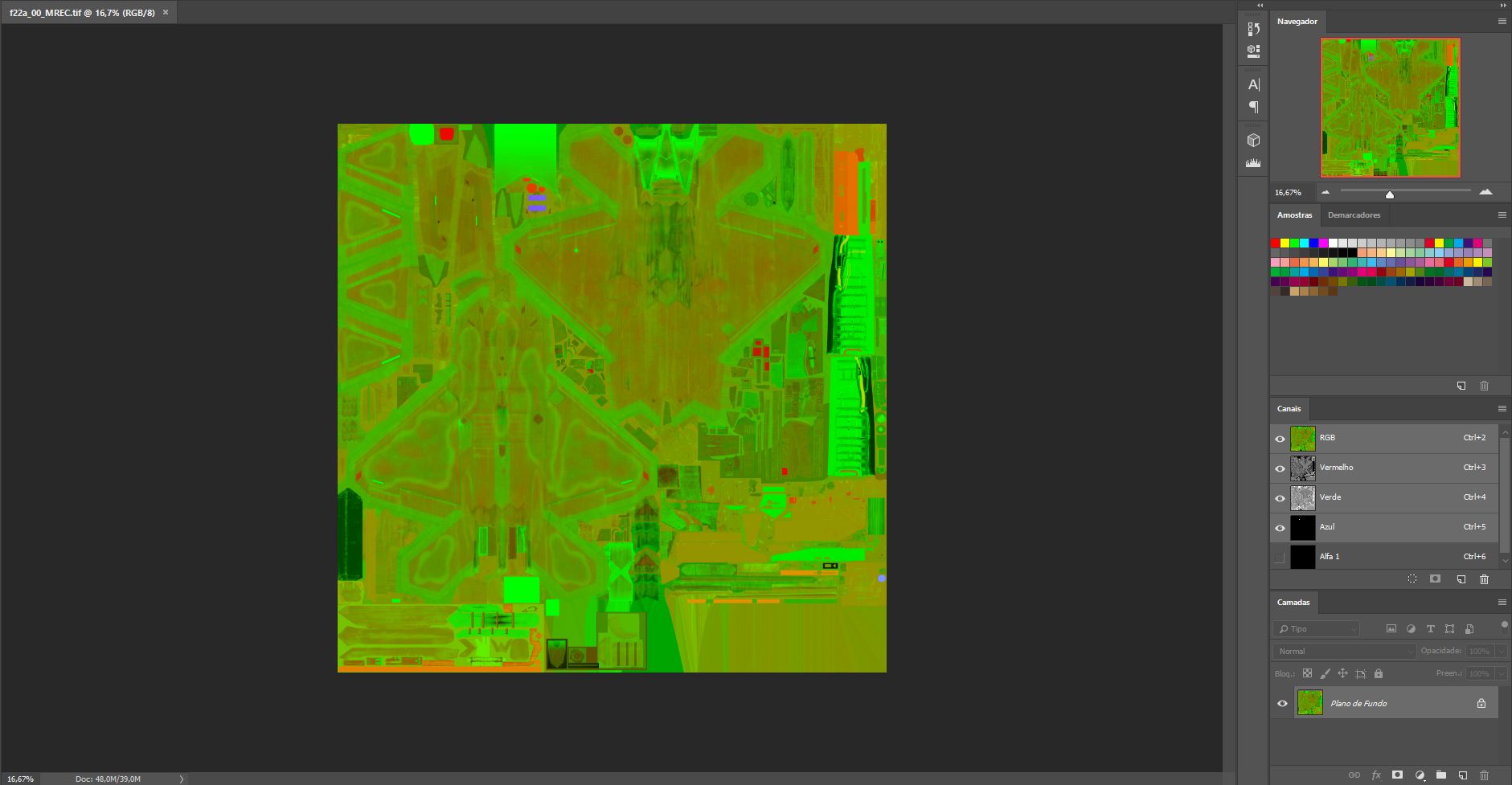 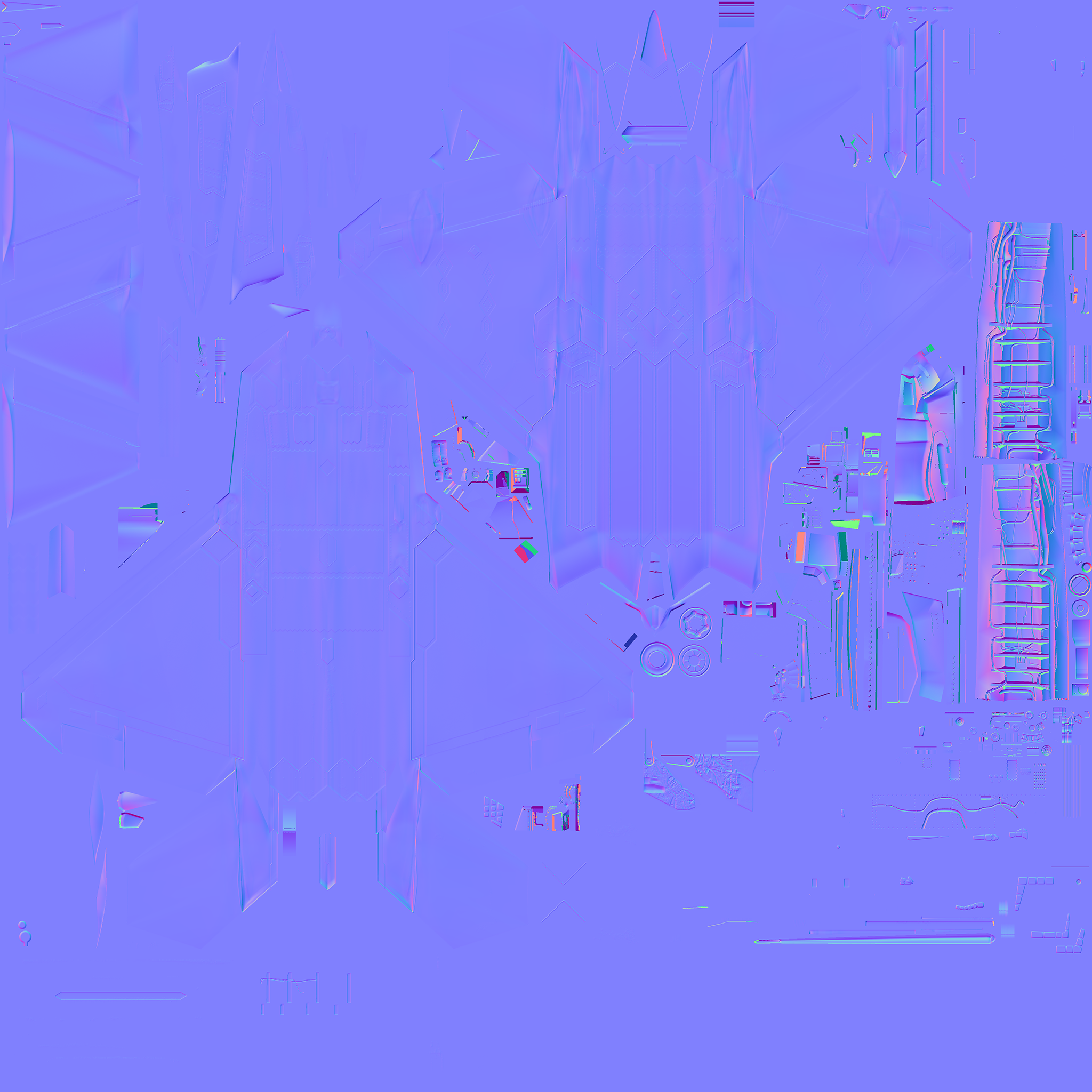 Normals are the evolution of the Bump texture maps used years ago, the role of both is mostly the same, but Bumps handled that in monochromatic tones, when Normals handles by using RGB, similar to the MREC map. Normals originally are made by modeling a high-poly 3D model with each detail sculpted on it, then the artist would model a less detailed 3D model without the attention to the details he developed before, but mostly it needs that the UV map and the topology of the model works the same. Then, the user would be rendering the texture map into the UVs of the low-poly model, which is what we call "Bake Textures". The major point of Normal maps turns that it can emulate 3D model volume, without those parts begin modeled on the newer model, which can turns to be very convinient as an illustion trick, however depending of the degree of the volume, it may turn the model uglier. 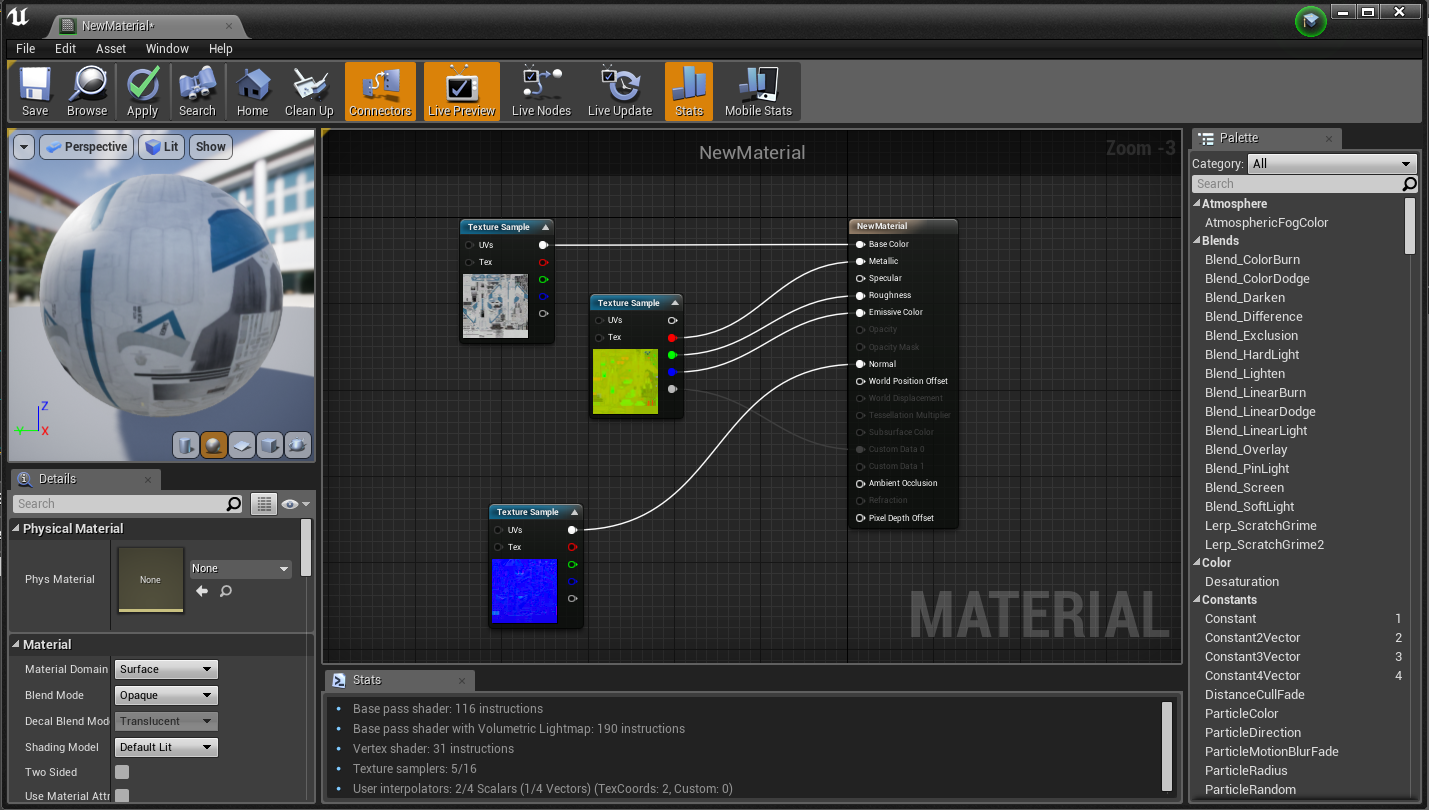 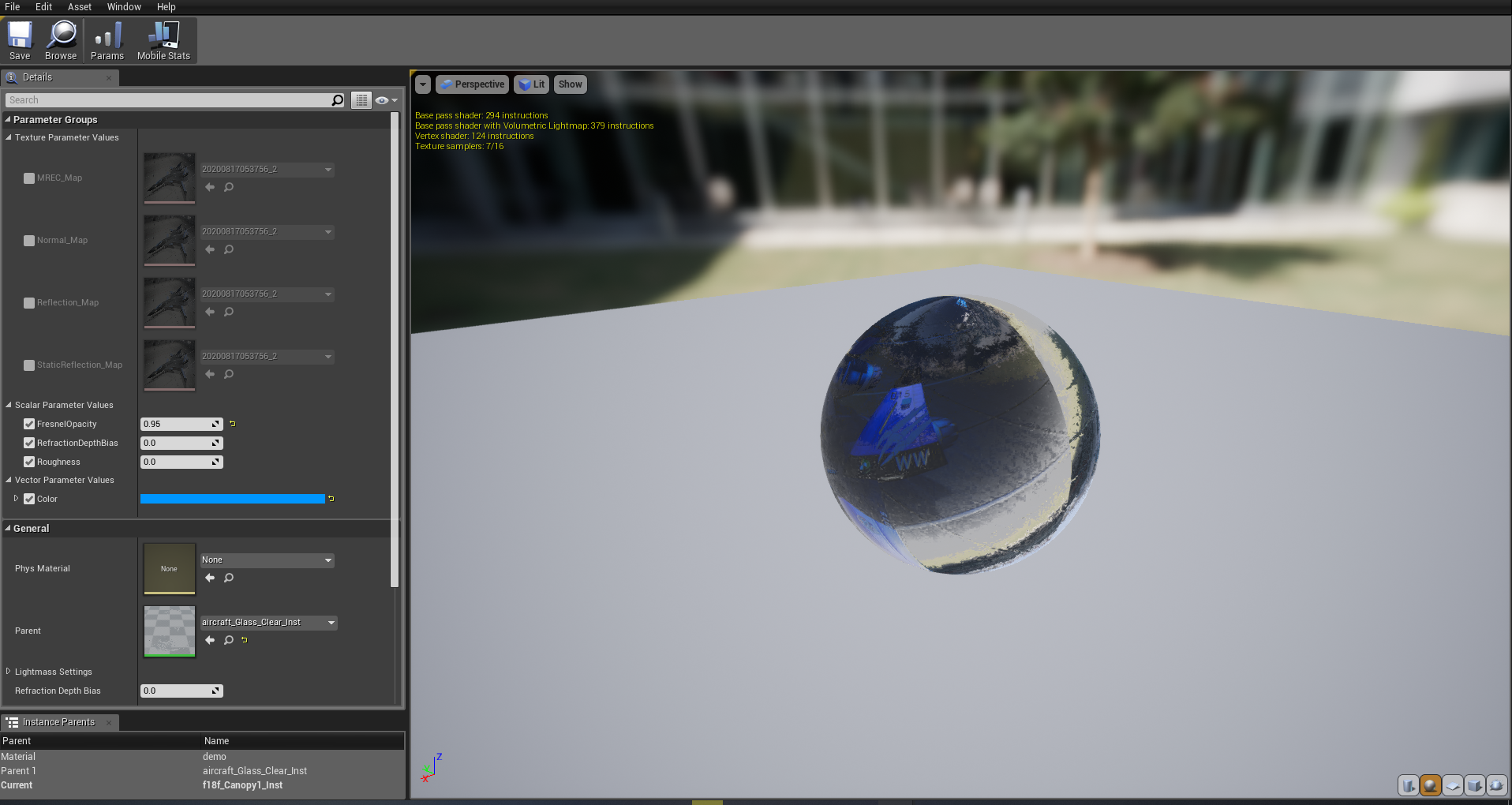 A material is what we call solid color blocks on the 3D modeling area, aside of colors, materials are mostly the gateway for assigning Diffuse, MREC's and Normals at the same time on your 3D model. UE4 makes use of a secondary function called "Material Instance", which is a parent-child group from the original material, and mostly is something AC7 needs to be constantly made for work correctly. Instances allow you to bake propreties at the textures used, like adding bloom, which is the glow that makes the emission of the Formation Lights really charming. Or layering with other materials by the use of alpha channels, like masks isolating decals. The possibilities of develpoing functions with the Instances got their potential, but mostly, the reasons of their use is listed at the Pros and Cons. 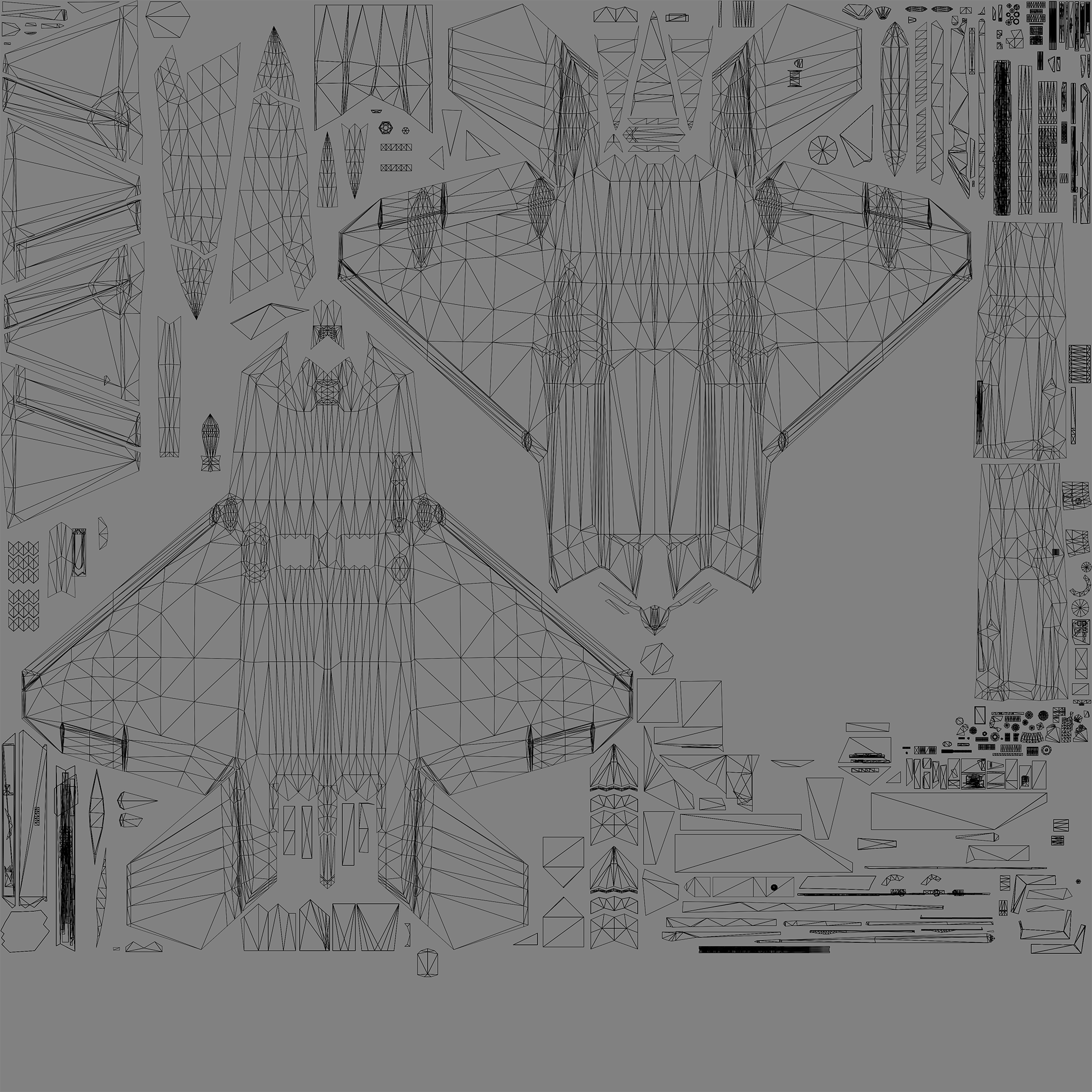 UV maps aren't exclusively texture maps, but something which is developed by the user on their 3D models, the UV stands for the axis points used on the 2D map range, compared to the euler system of the 3D modeling, which is composed by X, Y and Z axis. Unwraping a 3D model into a good topology for the textures look smooth, is the same as folding an origami papercraft, you would need to assemble it by denomiating seams on parts(called as Islands) that you want to be separated, instead of merged. Some templates of Codename VANILLA includes extracted UV maps using the official game models, mostly as sort of a reference guide at making skins. 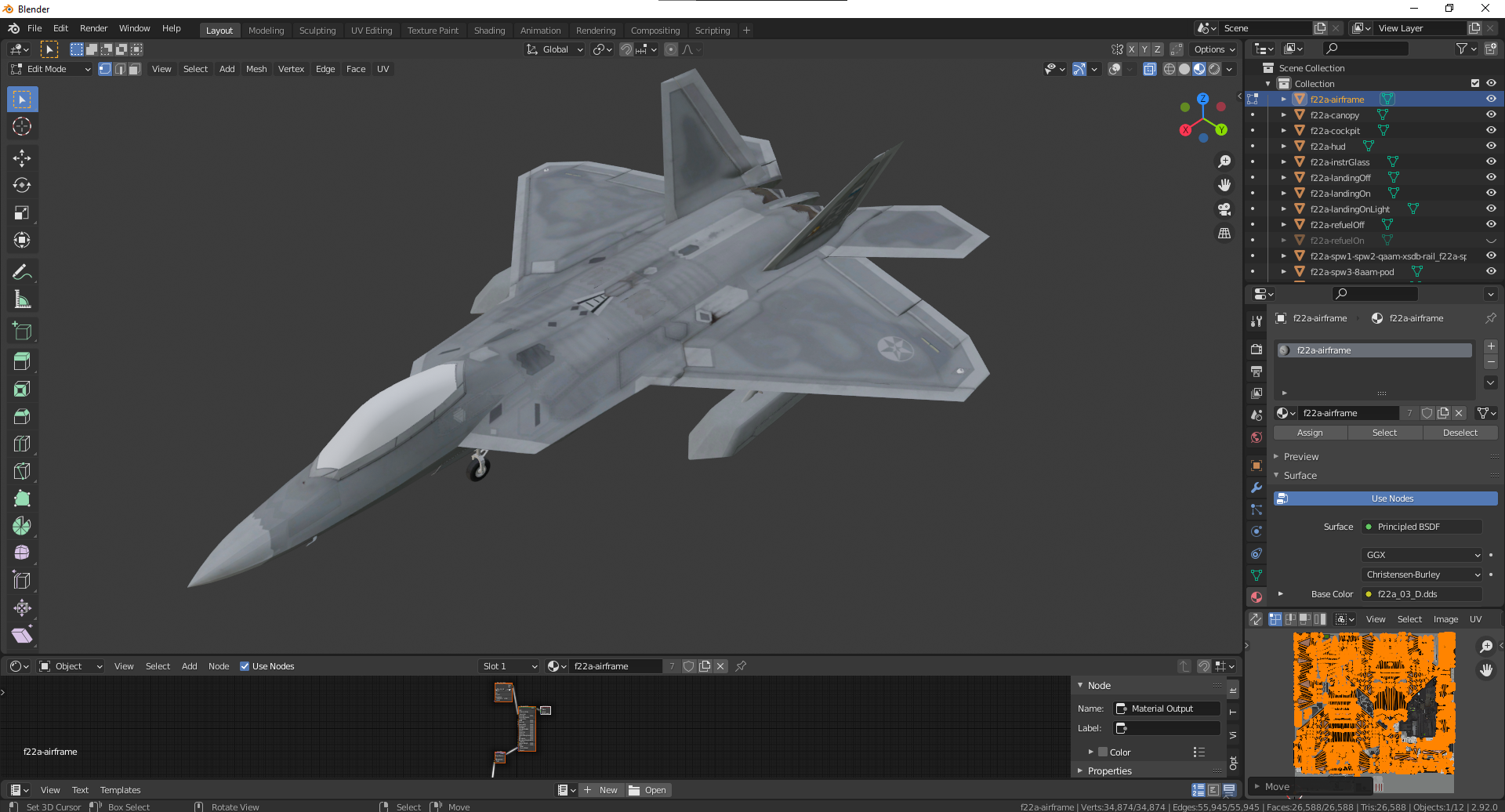 As the name says, is mostly the main asset that what makes the 3D games to work, mostly despite is possible to modify those, clearly isn't the topic were talking about, but using 3D Models at skin modding tends to be really useful due you got the clear control of the UV map, and you could analyze the errors of it without needing to start the game just for that, for finding out the models from AC7, they are listed at -Useful Links- article, and Blender turns to be a good open-source and free alternative for vieweing those models if you turn out to be hipster by the price tags of Autodesk.

With BC7 in mind, or mostly by making available slots for each skin, packaging and uploading a mod package in both Moddb and Nexus can turn into a tedious task, even more when the ISP bandwith isn't at their good times, from the times you almost wasted hours of your life for uploading a mere package of textures, you would want to know if some sort of sorcery could exist, giving some good news, it exists! 7-zip aside of begin open-source and not warning you to buy the license of it but you could use it fine. It allows you to compress textures with similar sizes by using the correct settings, mostly i would thank Krishty from ZFX Developia forums for sharing this knowledge for me. 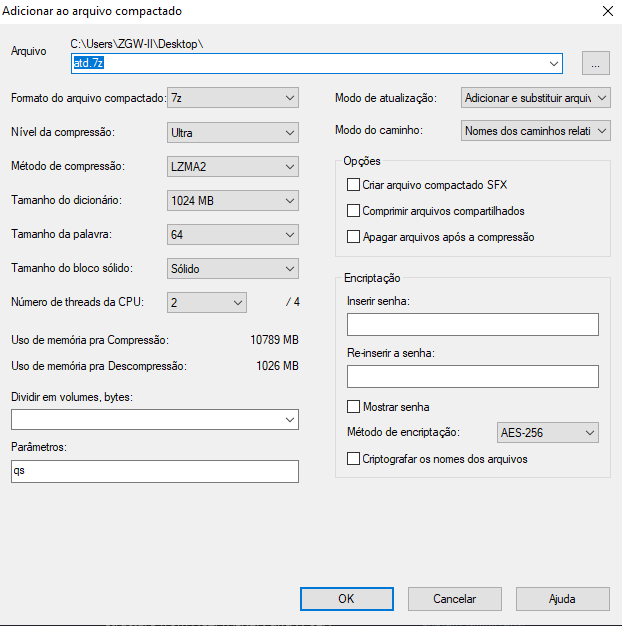 At first place, editing MREC textures isn't like editing a vanilla template, so you won't simply getting your patterns and painting in green, red or orange and regulate with transparency settings to "preserve details". My current workflow for editing them is getting the patterns, duplicate into the MREC layer, and instead of painting it, i click them to active their selection, and i do Ctrl + J on Photoshop for a part of the MREC begin duplicated, but with the selection of my pattern(you can also duplicate a layer with the details isolated to avoid overlaps too). This is the main key for making perfect MREC edits, as the only thing you'll be needing to do, is to regulate their luminosity on each channel separated, maybe apply a inner fade for camouflages, but you will notice the quality increase by doing on this way instead of the older methods you did. Also, isn't the case of Alpha Channels, but MRECs can be also very infamous for giving artifact errors if you edit the blue channel accidentaly by editing with all channels instead, to always begin certain those errors won't occure again, Photoshop allows you to disable each of the RGB channels by double clicking on the layer name, so disabling the Blue Channel will be the saviour of that white pixels runing out your precious skin(BTW, don't disable the blue channel if you isolate the details, otherwise the illumination won't be preserved) 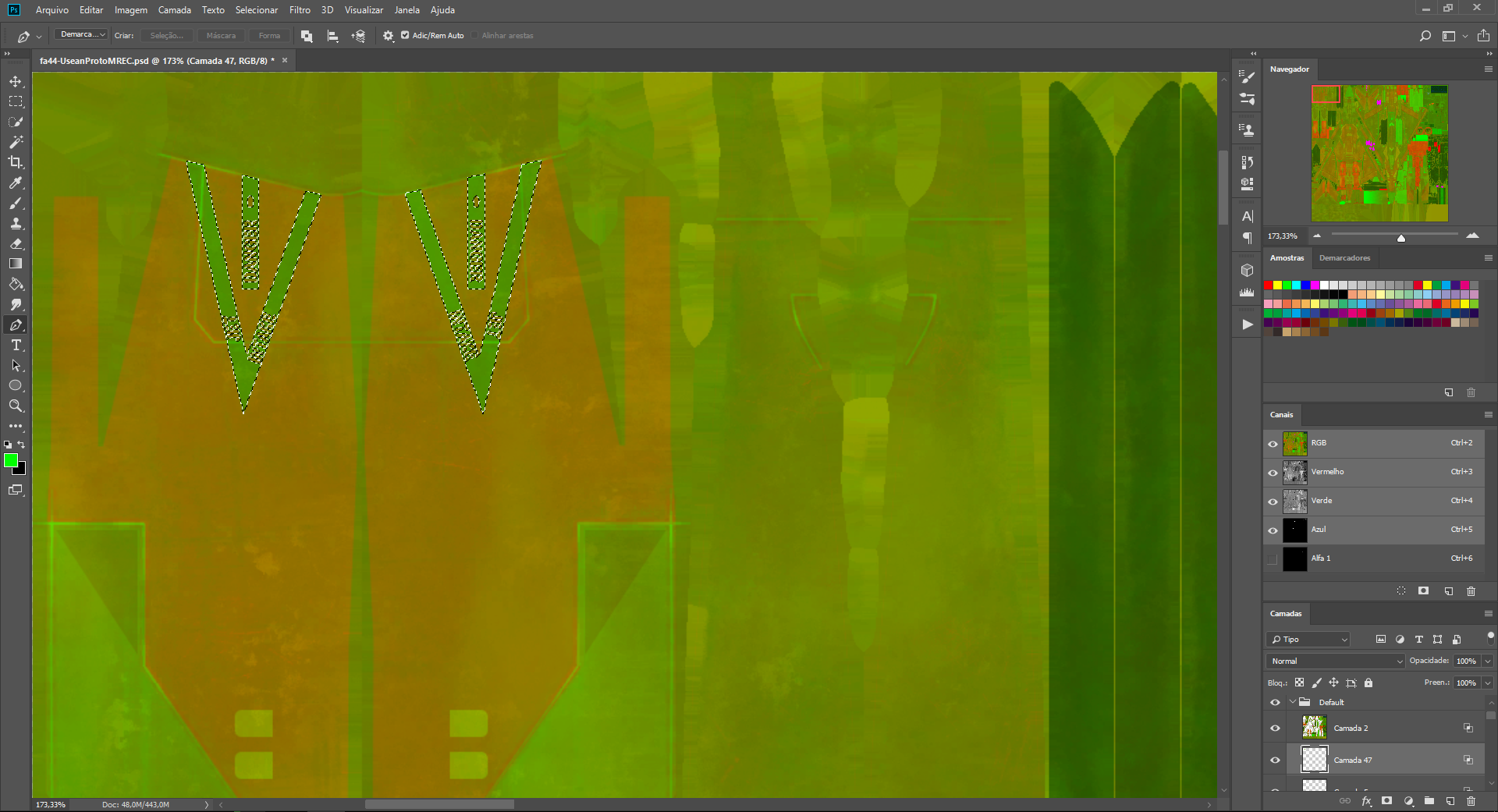 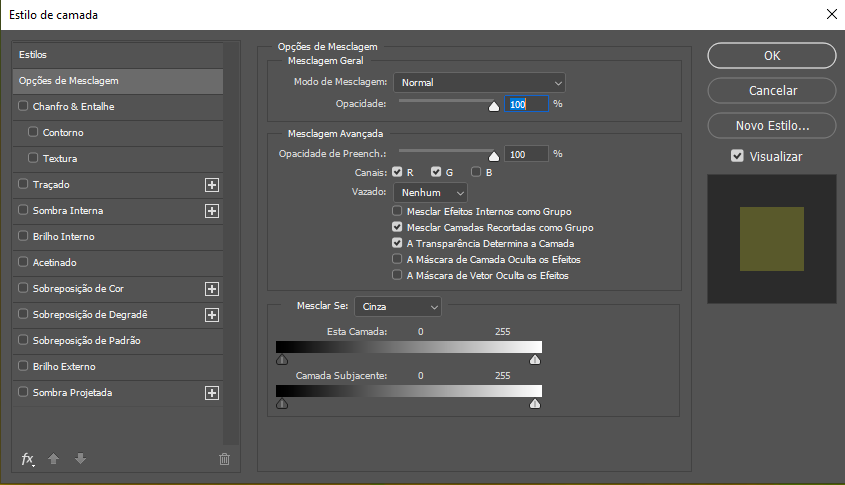 At times, making skin mods can be compared as making digital art, and during some point, there will be times you will start missing some details that you didn't noticed before, this is part of an effect called "addicted vision", which is the result by starting the computer screen for hours doing a task frequently, to the point your eyes will start lying that there are no errors on the current project. As sort to fight over this, start working during one hour at best, considering you're feeling a bit neurotic towards the screen, force yourself at getting out from the PC, and run towards your house for a hour or 30 minutes, it may sound a bit "autistic" at first sight, but when coming back to your computer, you will be able to notice that sole mistake of the pattern you'll be missing for most of the time by an instant.