This week we'll go through all the remaining games which have inspired us in the creation of Kalaban.

This week we will be wrapping up with our line of 'Games that inspire us'. There might still be one possible future recommendation after this, we'll see.

So, basically there are just way too many games for us to even count, which have inspired us during the years. I personally got my first computer in 1997, and during those first couple of years I played A LOT of games. I mean, I tried every possible demo and shareware I could get my hands on. Sports games, racing titles, boxing games, turn-based strategy games, you name it. Back then I was just so amazed by this new interactive medium (for me) that I wanted to try 'em all out.

A point worth mentioning is that we didn't have an internet connection when I started my gaming hobby. Nope, the games came on demo CDs, or on some friend's floppy disks. If I would've instantly had a decent internet connection, downloading and trying out games would've been so much easier. In my youth, we either bought magazines which had these CDs on them, or swapped existing ones around. So that way I never had this surplus of games, that the kids today have.

And also, at that time not every PC ran every PC title. Even if your computer was brand new. Our first computer had an integrated 2MB graphics chip, which didn't allow hardware acceleration. That would've required buying an extra graphics card, which we couldn't afford at the time. So, my first 3D shooters were all software rendered.

Quake II (1997) with software rendering VS. with hardware acceleration.

Keen 4 on the left, and the first scene of Kalaban on the right.

At first I was going to mention Doom (1993), because that game has had such a huge impact on PC gaming in general. But come to think of it, most of the 90s id titles have inspired me as a game designer. You can look at the overworld screen in Keen 4 (1991) for example, and see that it looks similar to the overhead perspective in Kalaban. I used to play that game a lot with my big sister, and I think we once got the whole game beat. The game also had this open-ended Zelda style design, where you would unlock different parts of the map, or access them once you've acquired a certain item.

The influence of Quake (1996) also cannot be underestimated. The game has a very strong Lovecraftian horror theme, and the sound design is to this day nothing short of fantastic. The game takes place in alternate dimensions, which are really nightmarish and gave me night terrors for years. Gameplay-wise it's a classic old school shooter with highly tactical combat, and it really takes the players to their absolute limit. The opening area in Quake is also really clever, starting immediately ingame, and letting you choose your difficulty and episode while getting used to navigating the 3D world.

Comparison of the horde in Warcraft II, and the one in Kalaban.

This one is a bit more specific. I first encountered Blizzard's Warcraft II on a demo disc, and I hadn't played the first one at that point. I had only seen the first one on my school's computer as a shareware. Some of the older boys from my school had installed it on the machine at the back of our classroom. We used to play Warcraft and other shareware titles in between classes on that computer.

But back to Warcraft II. I remember instantly falling in love with the hand-crafted animations in this game. The design on the characters and the world is masterfully done, and you can see that the developers clearly put a lot of time and effort into it. In my mind, the graphics still look pretty neat today. I think that the art style in this game has stood the test of time better than some of the more photorealistic titles of the same era. You really get the impression that you're controlling miniatures, which have come to life on a real-time battlefield.

Also, a thing worth mentioning is that when we began creating the character animations for Kalaban, this game was our main starting point with the look and the perspective. It's not a straight-up imitation of course, but something we drew inspiration from. Warcraft II has this slightly slanted topdown look, which isn't really isometric. Bonus mention goes to the wonderfully cheesy cutscenes, with some fantastically overdone voice-acting. Everything in these early Warcraft titles (and often Blizzard games in general) feels epic, and everything is so grand that even the voiceover feels in place. The story in itself is quite serious, but the game is filled with comedy.

In comparison, neither one of the games shy away from gore and horror-themed settings.

To anyone who has seen Kalaban in motion, this is should not come as surprise. Cultists, masses of undead minions, a gothic-themed 1920s setting and of course, tons of gore. This classic horror shooter from Monolith Productions has it all. This game is personally one of my favorite FPS games of all time, and not just an inspiration for Kalaban. Growing up, this game was both haunting and exciting, but to be honest, it never got into my head like Quake did. I might've had dreams about it, but not nightmares. Maybe it's the more cartoony violence and sprite characters, but even as a kid I was perfectly able to distance Blood from reality.

I think the level design in the game is superb, and it was done with the same engine as Duke Nukem 3D (1996). The theme in this game is well-presented, and it's consistent, although the game makes many pop culture references, to both horror movies and written fiction. The easter eggs and secrets in the game are wonderful, and always a joy to find.

The protagonist in Blood, Caleb, is an undead gunslinger and without a doubt an antihero. We wanted the action to match the craziness which goes on in Blood, just from a topdown perspective. Storytelling-wise the games are quite different, as Blood is an old school shooter, and its levels are basically 3D monster mazes.

The first boss in Diablo, and the aftermath of a battle in Kalaban.

The loot, the monsters, the creepy and shadowy environments. Ah yes, where would we be without Diablo? Like Warcraft, this game was also developed by Blizzard Entertainment, but by another team called the Blizzard North. I do have to confess that Diablo II (2000) had a much larger impact on me than the first one, but it was a necessary step in evolution. The game still has a fantastic atmosphere, and I like that they've taken the hardcore idea of roguelikes and put it into a mainstream game.

The game was a modern, realtime take on the role-playing and dungeon crawling. There had been a few similar titles like it on the PC, such as the Ultima 8 (1994) from Origin, but none of those were done with the same level of quality. Diablo truly is a "gameplay first" type of game, where it lets you get right into action.

The game has a branching storyline, and when you start the game, you can never know which one the game is going to choose. In addition to that of course, the environments are procedurally generated. Advancing towards Diablo, the main antagonist in the game, is pretty straightforward, as you descend to the hellish dungeons beneath the cathedral. When you've reached a whole new area in the dungeon, an exit appears on the overworld, through which you can travel back to where you were.

Diablo really sticks to the wisdom that simple is beautiful, and it doesn't hold back important information from the player. Everything in the UI is simplistic and straightforward. The chance for a better loot drop makes you wanna replay the game, time after time.

A lot of people have told us that Kalaban reminds them of Postal (1997). Maybe it's the art style, the perspective or that both of the games feature brown-coated men as protagonists. I don't know, to me it seems a bit weird. Sure, I have played Postal 1 and 2, but neither of those games have inspired me in creation of this title. 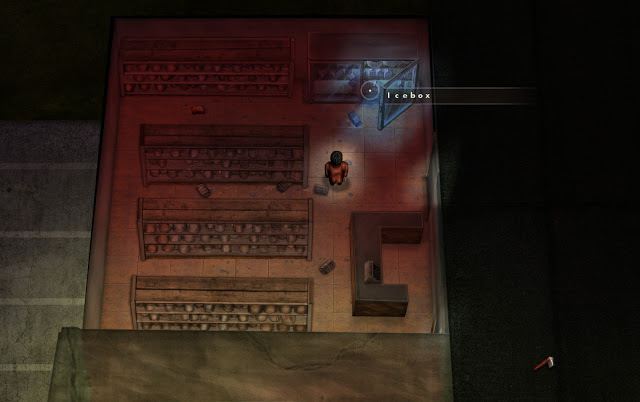 The abandoned gas station in Kalaban.

Kalaban is more of an open-ended story simulator, where Postal games are like Carmageddon: you can choose to complete the challenges, or play around killing NPCs for fun. They thrive on shock value, and that has not been our goal. Sure, our game has a lot of gore and horror elements, but it's all done in a story-oriented manner.

I think the closest analogy of our game would be topdown System Shock, with a retro alternate history theme. Sure, the gameplay is a bit different and our game has NPCs instead of emails and audio logs, but the goals are similar. The game has RPG style mechanics, but without leveling up and gathering experience. Some might call it "Metroidvania", others would compare it to Zelda, but the official genre of course is "action adventure".