Third game in the inspirational series and general talk of horror in entertainment.

It's time for another tale of inspirational games. This week we have the Sanitarium (1998), a demented and weird adventure game. The game is seen from an isometric perspective, with prerendered cutscenes thrown in between and in the middle of story sections. 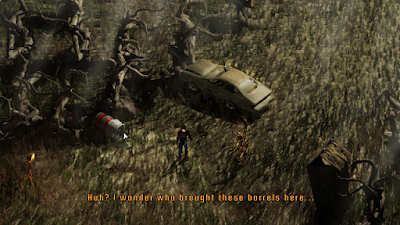 Our mockup of Sanitarium set in the world of Kalaban.

I first saw this game in Pelit magazine back when it was released. During that time I was more interested in 3D shooters and real-time strategy games, so I never got my hands on this game back then. The first time I properly saw it in action was during a screenwriting session with Tuukka, in early 2011. The atmosphere was instantly haunting and chilling, as the game starts from an asylum, and you can't remember anything. Your head is wrapped in bandages, and you've been in an accident.

During an early section you explore a town filled with disfigured children, with no adults in sight. The story immediately raises scary questions: Who are these kids? What happened to the adults? Did the kids murder them?

I've always found psychological horror and atmospheric stories to be more interesting than straight-up gore fests. When I think of gory movies and games, I think of works such as Total Recall (1990) or Blood (1997). To me the gore factor takes away the tension, and it takes direction more towards a macabre thrillride. They may shock you, but they will not truly get inside your head.

On that note, there will be a couple of graphic scenes in Kalaban too. The game is seen from a topdown perspective though, so it takes a certain distance to the shock factor.

To me, one of the few works which successfully combines gore with psychological tension is John Carpenter's 1982 The Thing remake. It has a haunting atmosphere, filled with paranoia and suspense. And it also features truly nightmarish monster visuals, all done with masterful practical effects.

Sanitarium has some elements of graphic content, but it's always done in a way that enhances the atmosphere. I'm personally a huge fan of prerendered artwork, especially from an isometric perspective, so this game has a special place in my heart. There's just something about prerendered art that makes me feel cozy. One of my favorite games of all time, Diablo II (2000), also has really timeless prerendered art. Of course, prerendered art is not just a thing of the nineties and early 2000s, and it's still used in games today, like the Clash of Clans (2012) mobile game. 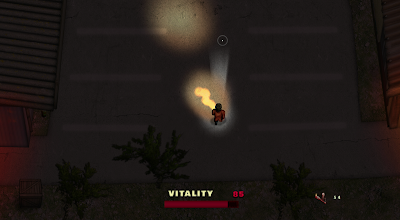 When we started creating the current topdown version of Kalaban back in January 2015, I remember thinking about this game. The writing on the first scene reminded me very much of the style in Sanitarium. The way you click on things, and the way Bob comments on them, etc.

Kalaban was originally designed as a three act story, but we decided to put our focus on the first act and make it as good as we can. The original idea was that first part would be more like an adventure game, second part would be more action-oriented with open-world exploration, and the final part would be all action. Now, all of those elements will be in the current game we're working on.

I'm a strong believer of games that serve a smaller world with lots of detail, instead of a huge open world sandbox with shallow gameplay. Sanitarium is definitely a game that belongs in the former category.

In case you haven't tested out the Early Access of Kalaban yet, then download the newest version now.