Lately I've been working on ways to customize gameplay. This update covers already implemented features that will be in the final game. 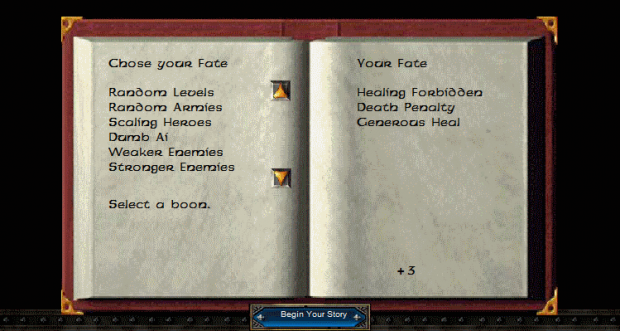 Hardcore Mode will enable an alternate set of rules for the game. With the default game rules, your units will enter every battle at full health and will be healed at the end of the battle to 100%; sort of like how the old Puzzle Quest used to behave. There is a death penalty though; armies that die in battle will still have full health the next battle, however their maximum health will be reduced every time they die.

In hardcore mode, your units will not be healed at the end of each battle, but instead they will carry on their wounds to the next battle. On death, your units will die permanently; they will be removed entirely from your retinue and will be lost for ever. However, to compensate for the difficulty, some encounters will be weaker and units will level up faster.

The death penalty can be disabled through settings, however, and your units can be healed in certain places.

And finally, Puzzle Quest will now have hero characters, pretty similar to the how the original Puzzle Quest have. The hero will be the protagonist of the story and will have a huge impact on the game. They will not only cast powerful spells, they will also give you a bonus whenever you match 5 gems. I will go into detail about the heroes when they are ready. For now, the four classes are the Commander, who will be a though "tank" class that buffs allied units, the Elementalist, a "mage" class that also manipulates mana, the Arcane Knight, a "rogue" class that also exceeds at silencing enemies and the Defiler, who can cripple enemies with it's powerful disease.

That's it for now. Stay tuned for the next update.