There are currently three Kings you can play with in King’s Conflict – all kings can use all the ‘general’ cards, but each has specific cards available too. Here, I'm going to introduce you to what the Mage King is all about.

Playing as a mage king provides many very powerful cards each of which can quickly swing a game in your favour. However many of these cards are expensive, and mage king players can struggle to obtain enough gold to use their big guns. Careful map control and judicious use of the ‘burn card’ facility are required to play well. 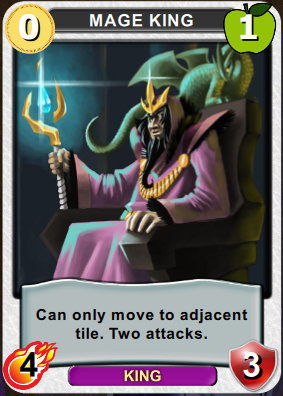 The mage king himself is the most powerful of the three kings in combat – while of course he is slow, his magic attack of 4 packs a serious punch. One strategy is to bring him into the attack, slowly marching him towards the enemy. Be careful though – his health is not high, and if you leave him exposed you can easily lose the game very quickly.

Wise Hermit
Provides you with a relatively easy way to get extra card-drawing power. He must be kept isolated – stick him in the corner of the map. Note that while he has to be away from servants, you can keep him near structures, and can use those to help keep him safe. Your problem with the Wise Hermit will be stopping the enemy from getting him close enough to stop you drawing. Place him carefully, and consider using him to draw off enemy strength.

Fire Mage
The fire mage is a glass cannon – he has a powerful magic attack which can destroy most enemy units before they can hit back, but if they do hit him he will die. Used carefully fire mages can be devastating, but don’t just march them blindly towards enemy troops. On some maps you can find yourself blocked by forests – but fire mages always make very effective defenders for your king. I never play a mage king deck without them, despite their high cost.

Lightning Wielder
Expensive, but devastating. While his attack is certainly useful, his main value is generating lightning strike cards, which can pick off enemy units at will, and for this reason you will want to keep him safe. Lightning strikes are especially effective against support units that are generating cards for the enemy, though they can also be used to wear down heavy combat units like knights. If you have a weather master in play you can use rain to increase lightning damage too, and you can also burn lightning strike cards for extra income!

Fire Elemental
A game-ender if you can get him near to the enemy king – there is little that will stop a fire elemental. If you have huge amounts of gold then combining him with teleport (move a mage towards the enemy king, then bring the elemental in next to him) will be devastating. If you can’t afford to play him, then his huge gold cost provides a very useful burn-card as well. 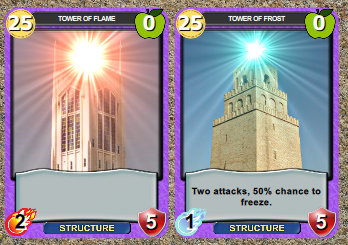 Tower of Flame and Tower of Frost
Mage Kings have two of the best combat structures in the game, provided with a reasonable amount of health plus a magic attack. These are too expensive to use for securing out-of-the way regions, but are perfect for keeping control of strategic points, or as support in big battles.

Arcane Shield
This is a very important card – use it wisely! It is not expensive, and immunity from damage for a turn (it lasts for the rest of your turn and until the end of the opponent’s turn, so for two combat phases) is VERY powerful, and can enable you to fry an enemy king with a relatively fragile unit like a fire mage. Remember though that the unit will still be vulnerable to damage from commands – it is only immune to combat damage.

Flame Arrows
Less devastating than some commands, but still useful. If you load your deck with cheap ranged servants (crossbowmen, hunters, etc) and Flame Arrows cards you will quickly have several mages on the map for little cost.

Teleport
This is definitely one of your big guns! Teleports enable units to skip defences and either take the attack directly to the opponents king, or establish a presence in his half of the map. Use carefully though – teleported units cannot attack on the turn they teleport, so if you are not careful they can be eliminated before they have a chance to do anything. Used with care though, teleport is one of the more obvious game-winners in your arsenal.

Rain of Fire
Mage Kings have two area-of-effect damage commands – this is the weaker, but it’s still very effective if you can catch several enemy units in one region. It affects Kings too, and three damage is enough to kill a Mage King, so can easily be used as part of a winning combination – for instance you can teleport a mage into the king’s region and play this card to instantly win the game!

Wild Firestorm
Expensive, and the three-mages restriction can be problematic, but if you can actually play this card you can wipe out armies, not to mention kings themselves – notice that there is no restriction on where you play it!