Telling a story via exploration can be a rewarding experience

I like games that have places to explore, mysterious locations to discover and background stories that glues it all together giving me the clues to why it was designed that way. I decided early on in the development of the MOD 'In the Shadows' that I wanted to design small story events that were located off the main path, that the player could choose to explore if they want. The starting area for the MOD is called the Temple of Swords, a dark cavernous location with cold stone walls and many guards looking to show intruders the sharp end of their sword. Like many things in the Quake universe the start of the story event 'The Well of Bones' is when the player finds a Key which is how most modern games mechanics work (PDA, mission update, NPCs) except Quake is more obvious with its choice of props. 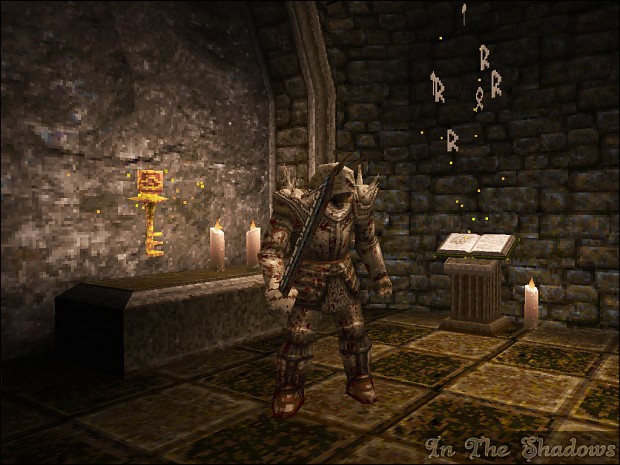 Finding the Key begins the Journey into the Well of Bones

Embracing true old school design, when the player finds the key it does not create a glowing dot on a map or a breadcrumb of large arrows on the floor but simply reminds the player to keep looking for further clues. This certainly confused a few testers of the map but maybe people just expect too much nowadays, the player will certainly find the door (it is on the main path not too far away) for the key, they just need to be patient and keep looking.

The gold door room is designed to tease the player with visual clues and background information on what is close by, but clearly out of arms reach. The floor has a large metal grate showing a floating object dripping blue light down towards a sea of skulls in a cavern deep below. There are several books scattered around the room detailing the events that surround the 'Well of Bones' and why it has caused such pain and suffering and finally there is the ominous gold key door wanting to be opened. 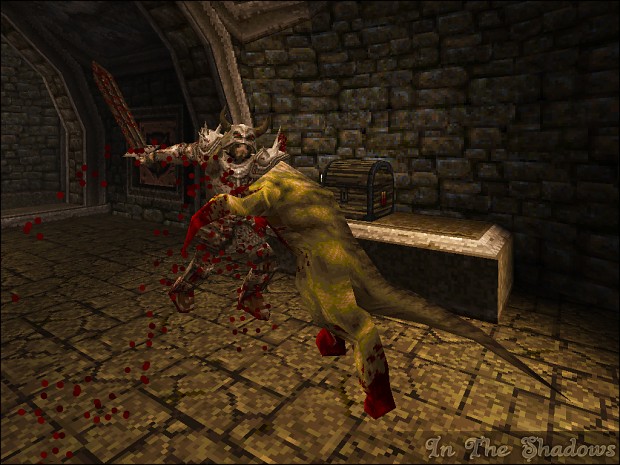 The Well of Bones seems to have a pest problem

If you talk to any Quake player about what is in their top five things they love about Quake, it will most certainly be monster infighting, for some reason it never grows old and is a lot of fun to get started and watch. Once the player opens the Well of Bones top entrance and takes the elevator down they see a demon spawning from inside of glowing rune circle and it hastily start attacking a nearby guard. The enemies tear at each other snarling and screaming as claw and rusty blade slash and cut at each other. The player has a choice at this point and time to decide, do they attack and fight two tough enemies or wait for the fight to finish and deal with one weakened enemy instead.

I always wanted something tough to greet the player at the entrance, this was off the beaten track and it is somewhere the player has chosen to be, it needs to set the tone for the next encounter. Originally the fight was just a demon running like crazy at the player and it was tough but it was not much fun and made most people panic. I wanted the encounter to have choices and by adding in the guard as a distraction for the demon, the player could have a laugh and then decide when to fight the demon. 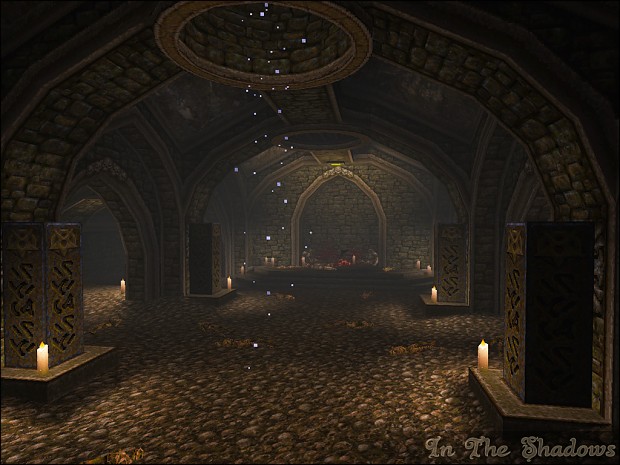 The Well of Bones - Dark and Gloomy

With the demon infestation dealt with and the player having some free time I thought it would be cool to add a book nearby containing some more background story and a little tease from a locked alcove with some useful items. Eventually the front iron grate is opened and the player can cross a sea of skulls via candle light to the final resting place of the last group of adventures who thought the 'Well of Bones' was an Osteologists conference. In true gaming fashion there are piles of supplies neatly stacked on shelving nearby waiting for light fingered adventurer types to fill their pockets.

There is a small secret inside of the final room so that players who love to hunt for surprises can still have fun before the main event. The item found is a powerful weapon with limited ammo but it does not really unbalance the event, it is just something fun to play with. 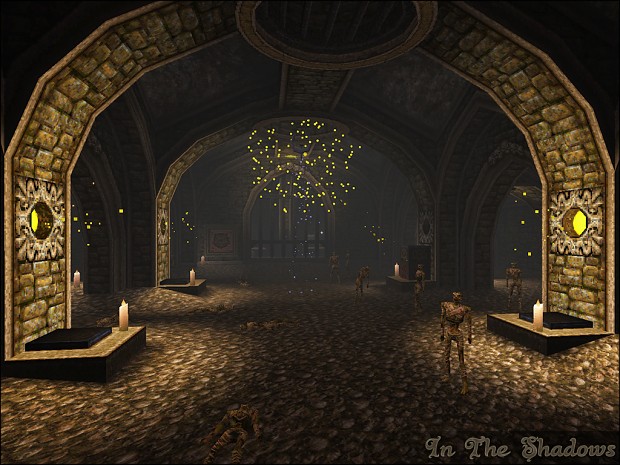 The Final stage, The Ritual of Bones

I can't think of many games where being locked into a dark room is fun and often is it just frustrating because you can't see what you are doing and usually end up having to repeat the experience until you learn where the designer expected you to be to survive. I wanted the 'Well of Bones' to start dark and moody but I did not want the player to be frustrated with the darkness, so as the event progresses the room gets brighter and more dangerous but still fun because everything is visible and the player can see what to do.

The final event is a classic arena format, several stages followed by a crescendo moment allowing the player to enjoy the final fight and feel like they have achieved something. The event uses minimal amount of on screen text interaction and the progress through the event is visually represented so the player can understand how long they have till the end. The final fight is certainly not tough but it does introduce a lovely slice of background and history to the location. By combining story with action this optional area will become something memorable and segment of the game that won't be forgotten quickly.

"small story events located off the main path" like the sound of that.

This looks amazing. When the time comes, if you should need a betatester, I'd be more than appy to apply.