2017 marks almost 1 year spent developing EXO ONE, which is slightly terrifying! What on earth have I been doing, then? How has the game progressed from then until now, and what have I done since AVCON in July? I often ask this of myself in fits of despair, before reminding myself I am only one person, who can barely code…!

So I’m back from a couple weeks of holidays where I pretty much didn’t set foot in my office or in front of my PC. I really like doing these breaks, as my office is both where I work and play games, and I spend a lot of time locked away in here! It’s good to have a complete mental break and just do something different. Instead of creating alien worlds, I really got into making under-water ones, so before getting to it, here’s a 90L aquarium (the first I’ve owned) which I’ve just planted out: 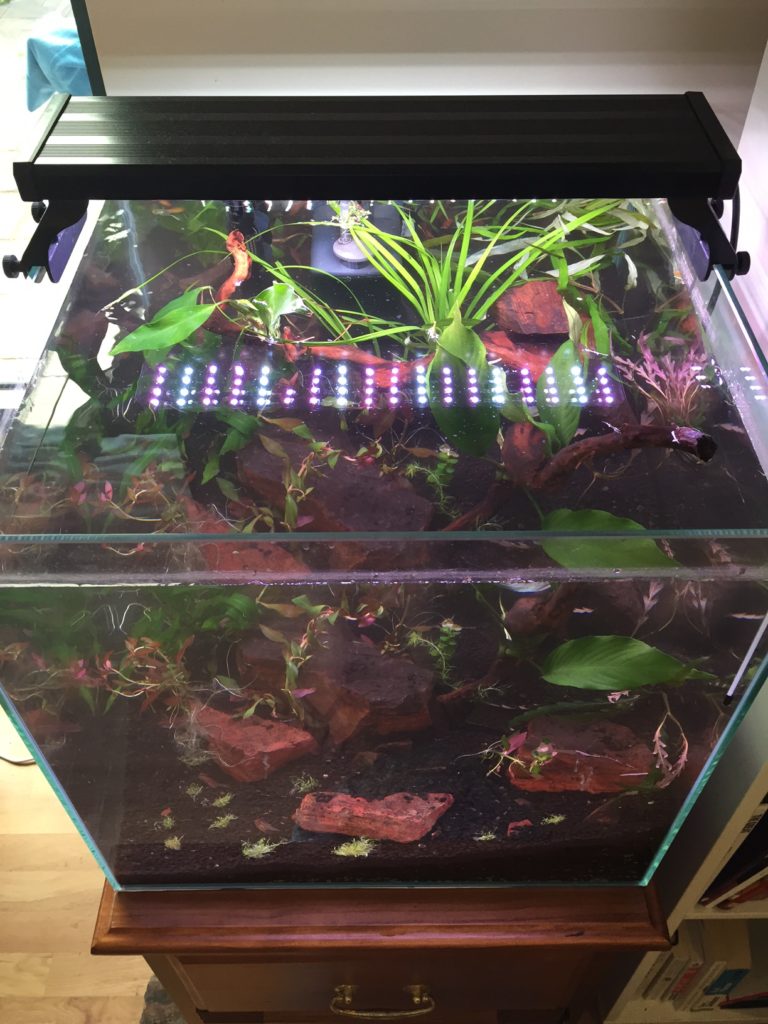 2017 marks almost 1 year spent developing EXO ONE, which is slightly terrifying! What on earth have I been doing, then? How has the game progressed from then until now, and what have I done since AVCON in July? I often ask this of myself in fits of despair, before reminding myself I am only one person, who can barely code…!

EXO ONE in Jan/Feb

Slightly slow and floaty back then. I’m not sure how this existed long enough for me to get a video of it! Remember, this was recorded mostly for my own records, or to be shared with plugin developers to highlight bugs etc. So it looks very rough, it’s recorded in the Unity editor, features the use of cheat/debug keys, etc. I wouldn’t suggest watching these all the way through! They’re unlisted as well, and I don’t really want them being featured anywhere, so please don’t share them or embed/etc.

trueSky (volumetric clouds/sky lighting plugin) is now integrated and this was an early version where I’m trying to highlight some issues, so this is mostly for seeing how the graphics have evolved.

I would say that from Jan/Feb through April/May a lot of time was spent getting used to using plugins like trueSky and Map Magic, as well as increasing my C# coding skills.

Here’s my EXO ONE AVCON application video (a South Australian comic/games event). At this stage you can see I’ve made some pretty quick progress, and spent quite a bit of time on the art style, as well as adding the glide mode and a 3rd Person Camera plugin. In some ways I look at this and feel like the game hasn’t progressed in 8 months(!), which in some ways is actually the case, but in reality, a lot of other stuff went in that is somewhat invisible, and includes a bunch of the following:

July was the month I released the game announcement, contacted a bunch of press, created the exo-one-game.com website, press release and teaser trailer, which required a fair bit of work:

This is more or less how EXO ONE looks today.

Since September I’ve been working on, and slightly going in circles on a few different ways of doing objective/goal/HUD stuff to communicate what the player’s objective is, what’s happening, etc.

The tutorial level got a big upgrade as well, and of course since then I’m wondering whether to throw the player ‘right into the game’ instead of having a specific level, which isn’t really revisited, and requires custom content and code etc. This is just one example of the kinda stuff that gets made and then thrown out!

I’ve also been experimenting further with gameplay by adding/removing stuff like gliding up or “pulling up” (not just gliding/falling slowly), energy/powerup systems, lightning strikes and stuff like that.

After a run of a couple months where the game couldn’t be built due to the correct checkbox not being checked (long story), I have started sharing some pre-alpha builds with a few people, and plan to expand this by probably one person for each build I release. I’m doing this so that I don’t quickly expose too many people to the game, therefore removing them from a pool of people who have never played before. I think this is pretty valuable as new players have less preconceptions. So if you think you should have a build by now, don’t worry, you’re still on the list, I’ll get to you eventually.

There are certainly a couple of things I’ve noticed I am particularly bad at. The worst habit I probably have is becoming somewhat obsessed with the visuals, so much so that I’ll carry on tweaking what should have been a completed planet, when I should be doing other things. This was partly my fault, but also partly because of changes I was making to try and extend draw distance, speed up framerate, and from changes to trueSky and the way it would light the scene. With such limited resources I was probably spending a lot of time trying to reach an impossible goal of a) looks amazing, b) has infinite draw distance c) has plenty of objects/plants/grass d) runs fast.

So as I create the next planets, I’m going to try and be very careful to lean toward “good enough” and not 100% perfect.

Once I’ve settled on a goal/objective system, I’ll be FINALLY (and embarrassingly) moving onto new planets, which I seriously hoped would have happened 5 months ago!

When most of the new planets are done, I’ll be integrating my self-voiced-terror-bad-narrative and making sure that it all makes sense to players as well.

Some of my biggest hurdles and challenges coming up will likely be:

When will it be out?

This is a tough one! Development has already taken twice as long as anticipated, but at the same time, the gameplay and story are relatively simple. I hope once the goals stuff is nailed I’ll be on a content creation super highway of planet creation, which will hopefully only take a few months. Perhaps a few more months for story/cutscene integration and further tweaking that, and then a couple months for testing prior to launch. So 8 months? Give or take 8 months? :P

I will keep you updated.