After wading through pools of blood, gore, and A&W Root Beer (stopping lovingly for a sip now and again), Joe stops by to interview the team behind the best looking Postal 2 mod out there, Eternal Damnation. Expect lots more blood and gore to follow.

[page=Night of the Living Postal Mod] 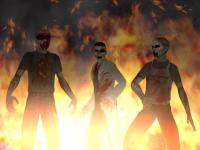 While mods for UT2004, Doom 3, and Half-Life 2 are a dime a dozen, mods that have hit the internet for Postal 2 are few and far between. Between being bashed by many critics and utilizing an older engine, it seemed that Postal 2 may never get a fair shake in the modding community.

Now enter Eternal Damnation, a zombie mod that looks poised to rank up alongside They Hunger as one of the best examples of its genre out there.

I recently got a chance to do an email interview with the team behind this game and ask them a few questions about their somewhat lesser known mod.

So, first things first. How did the idea for this mod originally come together?

Well, originally the idea started in the Postalforums and was first organized by Dopamine and another guy who goes by the name Trunks. Trunks eventually lost interest and Dopamine took over as leader. We've had quite a few people work on this for a while then leave or lose interest for one reason or another but we have a great core of people that have been dedicated to the mod for quite some time now. 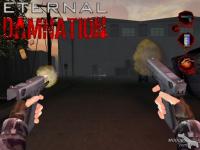 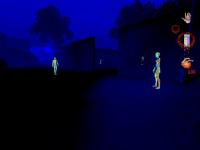 It seems like just about every major game seems to be getting a zombie mod nowadays: Unreal Tournament 2004, Half-Life 2, even Battlefield Vietnam at one point. What, in your opinion, sets Eternal Damnation apart from the crowd?

Our storyline is different from a conventional zombie type game which are usually based around a virus of some sort. Also how many mods let you punch zombies in the face with knuckle dusters?

And speaking of different games, while mods-a-plenty seem to be coming out for all of the big ticket games, next to none have been made for the Postal 2 engine. What led to your decision to make this game on this particular engine?

We were all big fans of the Postalseries, and thought that with the modding capabilities provided with Postal 2, that we should make a mod. There were no specific features that drew us to the engine, as it wasn't the case of having a mod idea, and then finding an engine for it. We knew we wanted to mod Postal 2because again, it's such a unique game and we love it, and also because there were no mods being made for it at the time. 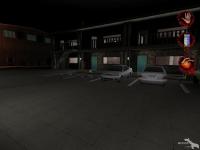 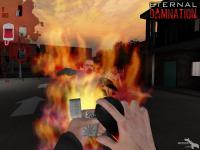 In the screenshots, the game seems to be a free-roaming zombie mod, which is one hell of a neat idea. Will there only be zombies in the game, or will other people still be around as well?

There will be normal bystanders and you may also get the occasional help from an ED team member and with the town being infested by zombies it's every man for himself, so people may well attack you. Also expect to see some crazies from the asylum and even some of the carnival's 'locals'.

[page=Postal Dude of the Dead] 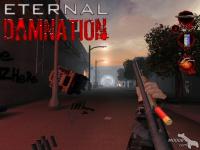 Postal 2 uses something called the Pawn Slider. It's called the Pawn Slider because if you go to the performance settings, you can change the number of bystanders in the level using a slider. When you first enter an average town level, there's somewhere around 100 bystanders. You don't see all the bystanders at once, though. The pawn slider hides enough bystanders so that you never see more people than what you have specified. As you kill bystanders, the pawn slider sees that the number of living pawns is less than what you have specified, so it tells some of the hidden bystanders to appear and start living again. We will use this along with some regular pawn spawners in a some of the maps so that there will be a constant onslaught of zombies to battle your way through.

Can the zombies carry weapons of any sort?.

We have one class of zombie that carry a weapon but what type of zombie and what weapon shall remain a secret. 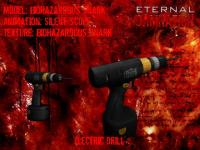 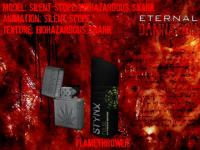 Let's keep talkin' weaponry. What all can gamers look forward to killing hoards of the undead with?

We have 18 all new weapons, the list is as follows:

So take your pick and start killing!

Will the game feature an entirely new city, or should gamers expectto be running from the undead in Paradise, Arizona?

Eternal Damnation is set in a small town called Hasselridge. Eternal Damnationconsists of all new maps for the Hasselridge area and none of the original Postal 2maps are being used. Our maps contain new static meshes and textures never before seen in postal. 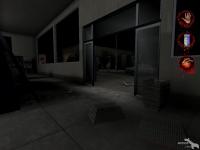 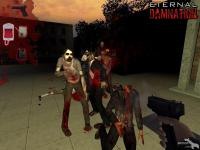 From your ModDB page, it looks as though the game has a pretty solid plot set around it. Will the game feature a linear set of objectives, or some basic mission goals set at the beginning of the level like the original Postal 2 had?

Right now the way it's looking is it will be linear with missions to accomplish through the 1st part of the game...a couple hours of that probably and then it will become totally free roaming once all the mission are complete. 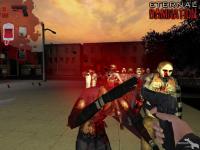 Aside from the zombies, the new weaponry, and entirely new plot, are there any new features being implemented in the game that haven't yet really been divulged?

We've pretty much been open with everything we're doing but we do have some great new features like the heatvision and each class of zombie having different strengths and weaknesses. We also have improved gore, and weapon effects such as realoading, shell ejection and muzzle flashes which light up the surrounding area.

Do you have a set release date yet? And what all will be implemented in the initial release?

We are shooting for everything being complete by October 15th. As far as the actual release date it should be soon after completion. 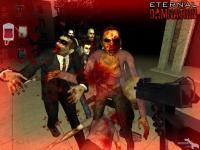 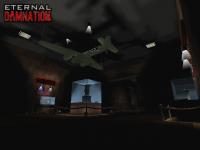 Any plans for multiplayer?

Right now we are concentrating on single player. There may be some multiplayer stuff done in the future if the team wishes to continue with ED, but that's not a priority right now.

Now for a few non-mod specific questions. As I've been asking like crazy lately, in light of the Hot Coffee Mod scandal, where do you see the mod scene headed for the future? Do you fear that more developers will be afraid to put tools out there for fan development, or do you think it will all be business as usual?

I think the main problem with the Hot coffee mod was that it wasn't really a mod. It was code that was put in the game by rockstar originally and somebody just figured out how to unlock it. I don't think the mod community will suffer from it. Next month there'll be a new target and so on and so on. Same old bullshit...new game to attack. Game makers excluding modding tools would just kill the game faster because mod communities are what keep games alive for a lot longer then if there were no mods.

And finally, what did you think of Land of the Dead?

Haven't seen it yet. 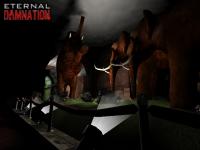 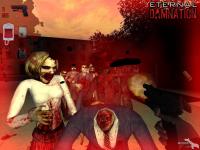 Thanks for your time!

All answers provided by SKillMaster, [BAMF]BitchAssMoFo, and Biohazardous Snark. All images taken from the Eternal DamnationModDB page.

Sadly, Postal 2 never made it to Australia. If it did, I would be exited though. :)

Australia never get any good games. I'd hate to live there.