A look at the Principality feature, some localisation and others...

Posted by BlackPrinceofBritain on Dec 6th, 2017

Alright, so I'm still in the middle of final exams, but I had some time on my hands so I debugged and refactored some of the event codes, took some new screenshots (the previous ones were arranged quite weirdly...)

A core part of this mod is changing the player's experience playing as a Chinese pretender empire as well as observing an AI pretender empire if they spawn (which they do as some of you probably have seen...). So the first step in building this new immersion is to include the concept of "Principality".

Basically, they're appendage titles just like Western Europe, such as Prince of Wales, Prince of Girona, Dauphine and whatnot. And just like Western Europe, before the early Tang dynasty they're almost always associated with a landed fief. By the start of the game however, there began a trend of making these Imperial titles quite honorary, with the Emperor occasionally appointing these sons and younger brothers to regional commands. Another thing is that they're almost always exclusively limited to those of the Imperial clan.

How are they shown in this mod?

In game, after you've formed a pretender Chinese dynasty, you can go to the character interaction with any male member of your dynasty in your realm and click on the "Give Imperial Principality" button. 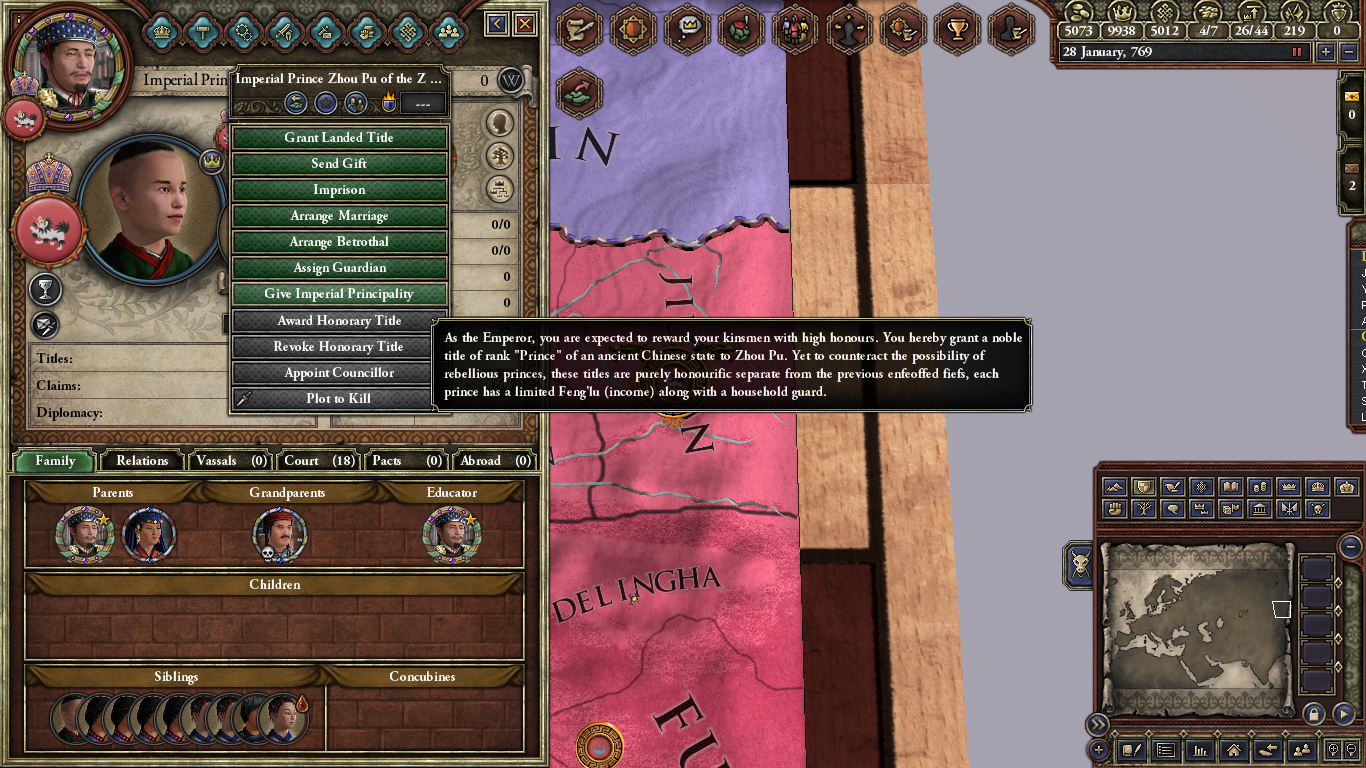 Then, there will be 1 of 39 (40 in total, but 1 will have the same name as your dynasty so it will be excluded when calculating) historical Chinese appendage titles given to this little baby boy. 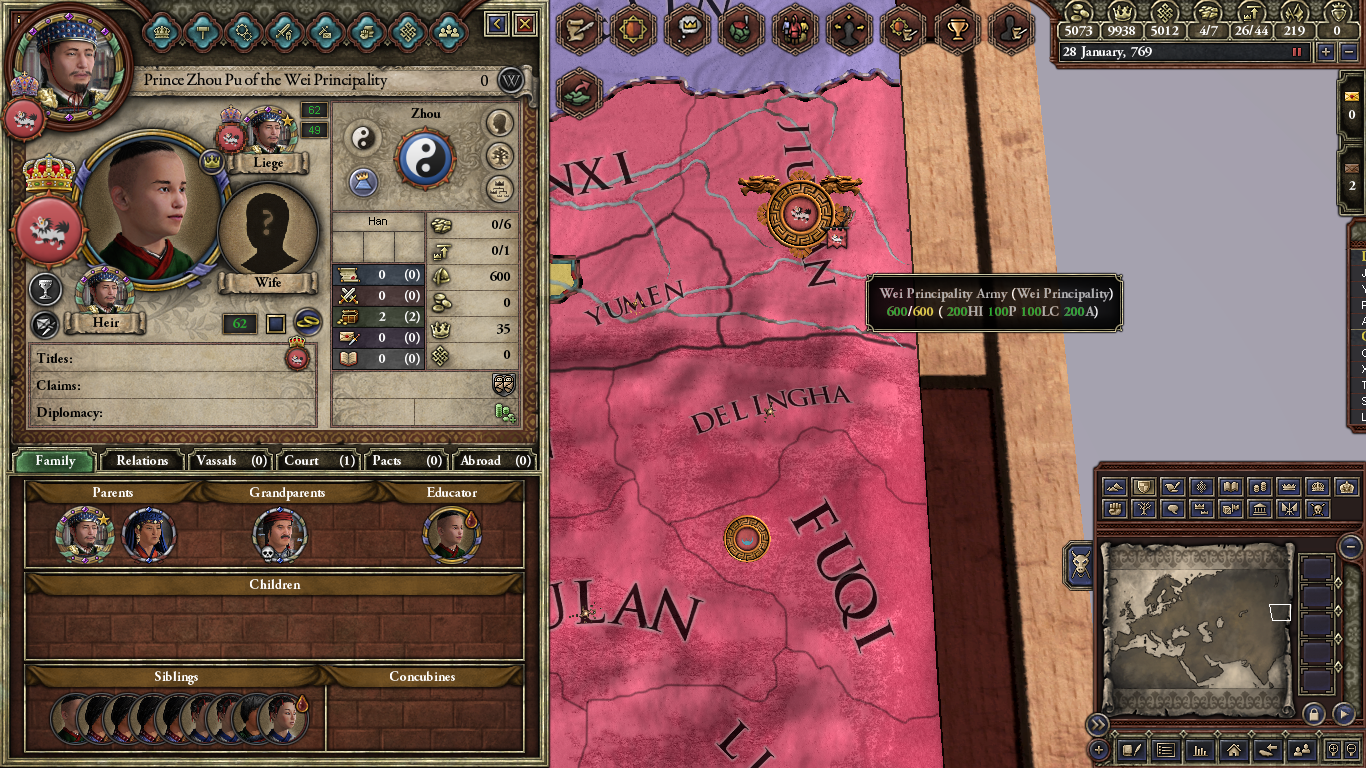 Here we can see that Baby Zhou Pu has become the Prince of Wei. Each Imperial Guard has a set guard of 600 troops. Historically they would've been a lot bigger depending on their regional commands, with the Crown Prince entitled to a 30,000 retinue. But of course, seeing that the average AI entity probably would be lucky to have a 30,000 levy on the map, it's been modded 600 per each Imperial prince instead.

Also, since the troops cost maintenance, they're given a monthly income of 0.75 (just enough to pay for the guards). However, I've considering adding an extra 0.25 for them later or something. 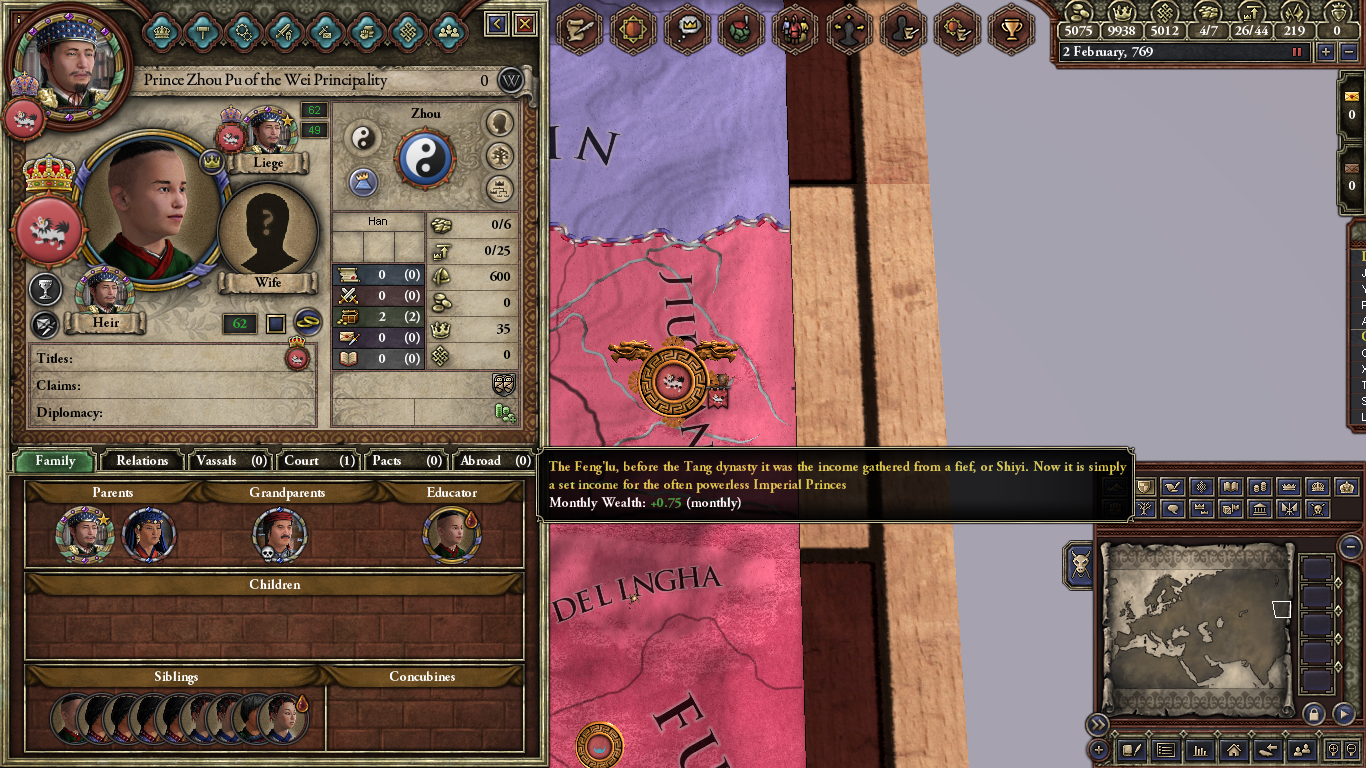 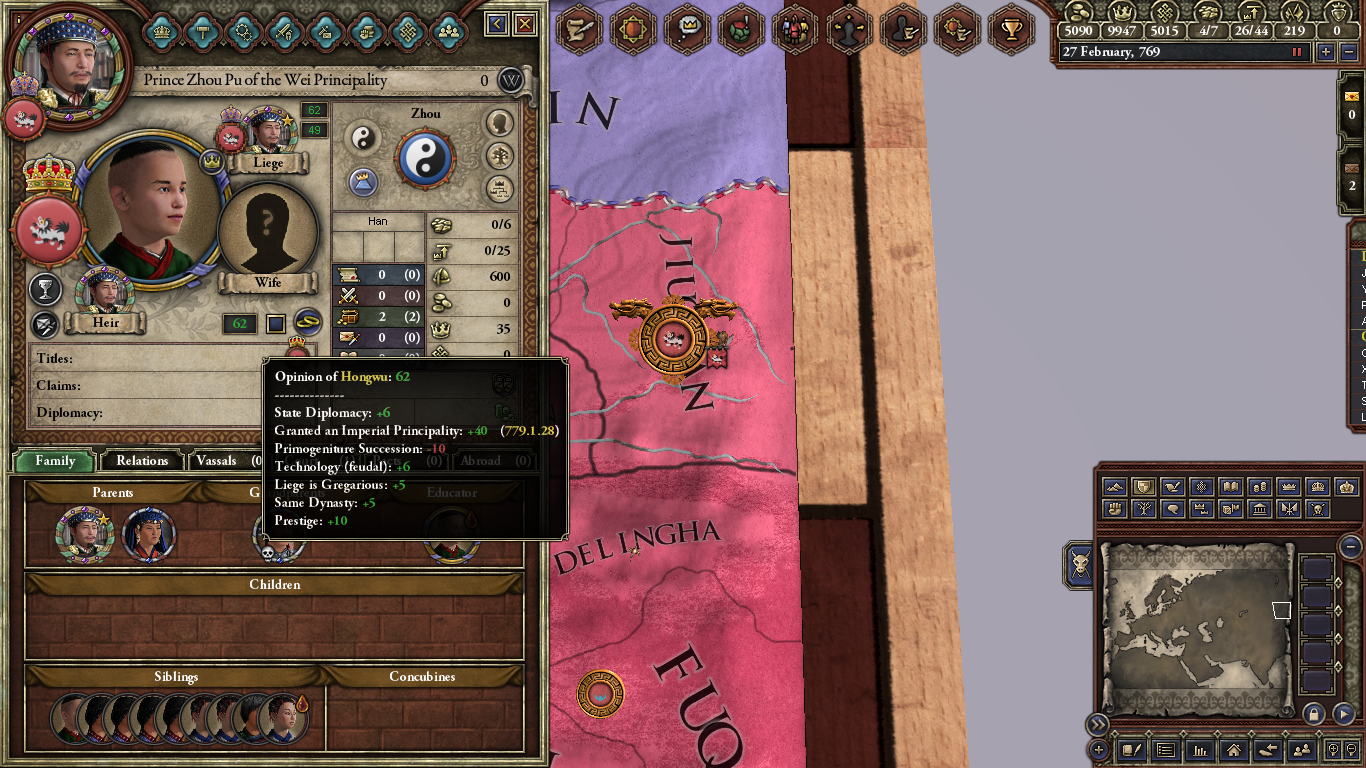 Notice that this only gives a +40 opinion boost, because Chinese Princes are entitled brats... You're only giving them what they expect you to give.

These titles are dynamic, so during the case of multiple Chinese Empires existing, there can exist multiple Prince of Wei's, but only 1 "Prince of Wei" may exist in each realm. A text document will be included in the mod that lists out all the possible Principality titles.

Now a key part of what motivated me to make this mod was looking at the names Paradox liked to give to Chinese Emperors. I've done away with the old Temple-name system since they should always be given after their deaths. Instead, I've instituted randomized "era" names. Era names are essentially equivalent to calendar names (Like AD/Anno Domini, so A.D. 1644 would be Chongzhen 17 in China). These are what the average peasants or foreign diplomats *sometimes* refer to Emperors as, so they double as "names" for Emperors during their life time. Before the Ming dynasty each Emperor could go through as many as 10 per reign, after the Ming they are almost always kept to 1.
There are 61 in total, 10 reserved for founding Emperors of a dynasty. 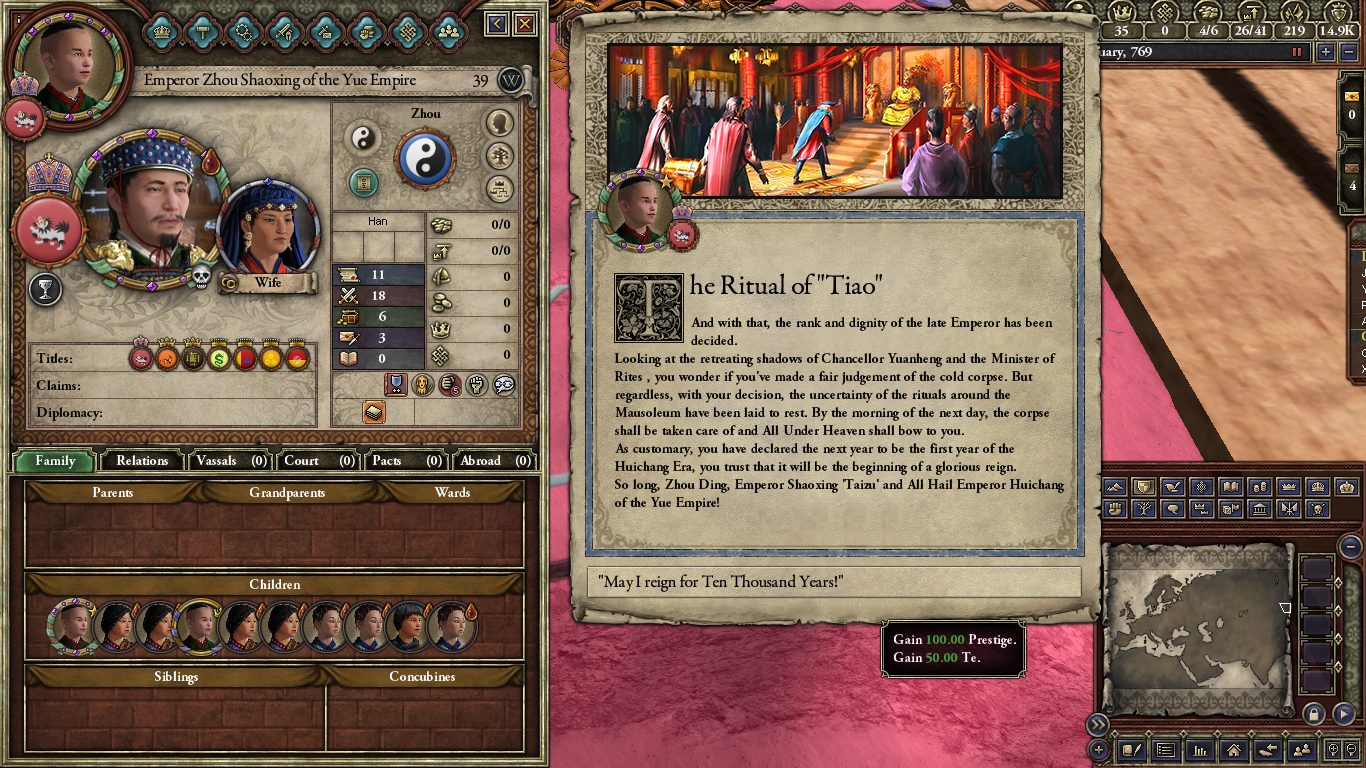 Here we see the new Emperor (now named Emperor Huichang) adopting a new Era name upon ascension, and assigning a Temple name (nickname) that summarized the Emperor's reign. In this case, Emperor Shaoxing became known as "Taizu" (the Great Progenitor). But more on this central system in the next dev article... Like the Principalities there will be a text document for all the possible era names and some of them will be annotated with historical events.

Localisation wise, I've changed all the old "Kings", "Dukes" and "Counts". As Imperial China was mostly a bureaucratic government, Kingdom-level titles are usually non-hereditary Circuit commanders. By the time of the game during the chaos of the 8th - 10th century, many of them had become hereditary, so I've decided to name the non-Viceroy Kings as "Hereditary Jiedushi" or "Hereditary Circuit Commanders". 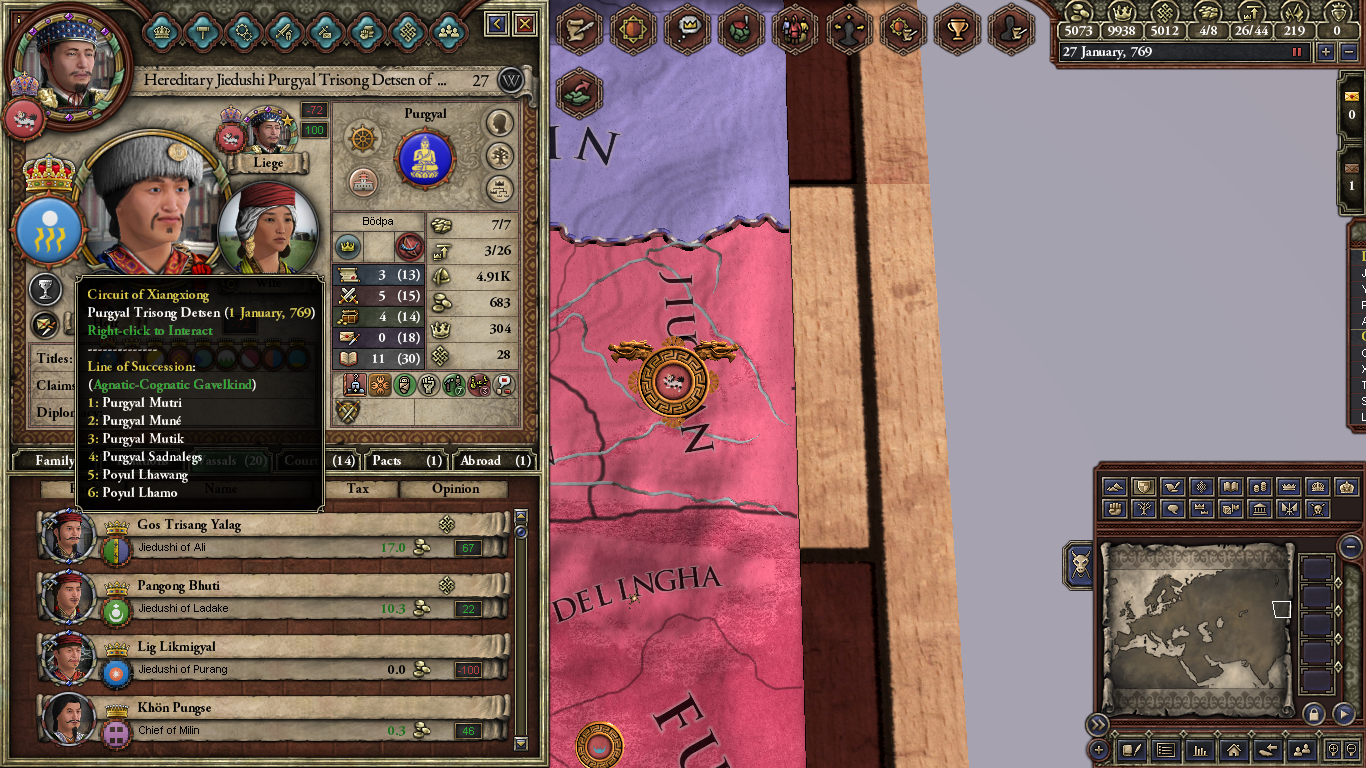 There's a problem with Ducal localisation that I'm currently looking suggestion. Dukes are currently named as "Jiedushi" as well, since if each duchy corresponds to a province (as with the case of Qinghai and Jiuquan), there's never a rank of a "Kingdom" in the eyes of Chinese bureaucracy. So Kingdoms and Duchies will share their names as Circuits, with Kingdoms treated as Provincial Commanders who have jurisdiction over several Circuits. 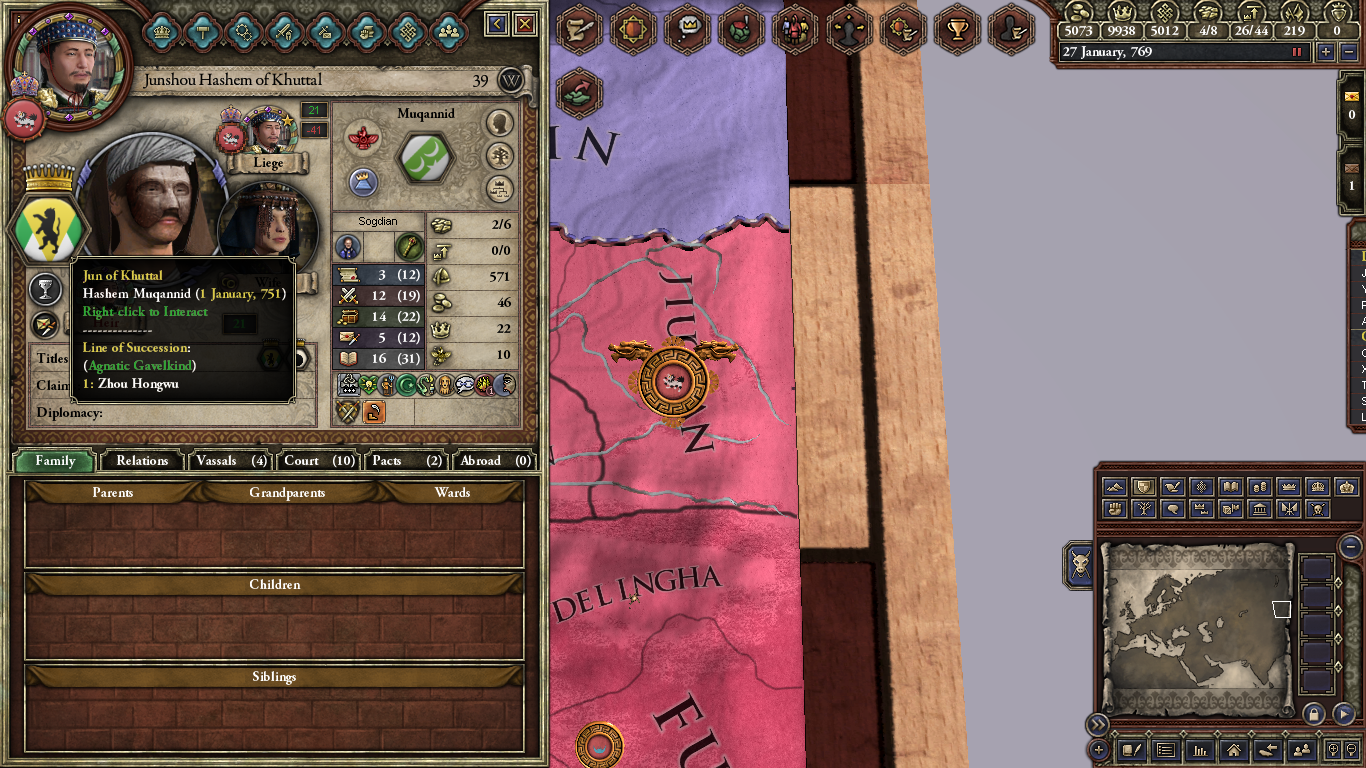 County-leveled rulers are named "Junshou", or the administrator of a "Jun" = County.

I understand the new Principality feature will cause confusion in the game with the existing "Prince of __" minor title. Therefore, all Chinese "Prince of__" minor title will be changed to "Imperial Prince" to avoid confusion. Because believe it or not, there is also a rank of "County Prince" for those who aren't dynastic that I'm planning to implement in the future...

This mod is just getting better!