We're looking at special equipment (cloaks, jump drives, hyperspace scanners, docking modules) and explaining some of their functionality and uses. This is a part of a number of articles that will look at all of the new features Discovery: Exiles has introduced.

Some time after the initial release of Discovery: Exiles, several important additions were made to the mod. These were the inclusions of player owned and created stations, jump drives, hyperspace scanners, cloaking devices and docking modules. Pioneered by lead developer Cannon, our spin on these classic items have been well received by the Discovery community, which is promising news for our future plans! This article will be focusing on the new special equipment.

All of the mod's special equipment is produced on Player owned Bases (PoBs), within factory modules. Some of these modules require rare or hard to come by materials, such as Active Nomad Artifacts that can only be looted from extremely dangerous and isolated edge systems. Nomad organisms also form a key part of a number of the more advanced technologies, requiring hunting trips into the most wild areas of space - or the financing of individuals who are willing to do it for you. The largest cloaking devices and jump drives are known to sell for hundreds of millions of credits apiece, making their production a lucrative (if difficult) market.

Cloaking devices work as the name suggests, turning a player's ship invisible. These come in various sizes, ranging from fighter all the way up to battleship/transport cloaks. These different cloaks use increasing amounts of fuel, in proportion to the increasing size and cargo bays of the ships using them. Certain commodities make for better fuel than others, too - nuclear MOX makes for much better efficiency than H Fuel, for example. Cloaking devices have been used for cunning ambushes, covert retreats, evading pirates (or catching traders) and of course, espionage. If you've ever longed to make like Orillion and vanish with your own personal Osiris, this is definitely the tech for you. 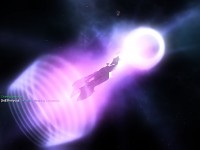 Jump drives and hyperspace scanners are both linked together - jump drives can jump a player from one system to another, while using a scanner to plot exit coordinates makes that jump a lot more accurate! It is possible to "blind jump" a ship, but there's no telling what system you'll end up in, or where exactly you'll appear inside it. Materialising inside a star or planet is enough to ruin anyone's day! Like the cloaking devices, jump drives use in-game commodities as fuel and come in a number of different sizes that are suited to different ship types - the largest drive for battleships is also capable of dragging along other ships that are nearby. This makes it brilliant for fleet surprise attacks, or large jump-convoys for traders. 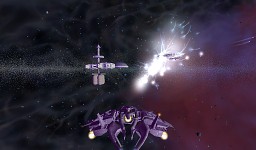 Finally there are docking modules. Many larger ships are capable of allowing other fighters and snubs to dock and be carried around inside them. Large capital ships such as carriers, as well as transports such as the Renzu, Luxury and Royal Liners tend to have the most docking module slots. Each module allows the docking of one snub, while taking up 400 units of cargo space. Having a fighter hidden away in your cargo bay makes surprising pirates an entertaining occurrence, while carriers gain the capacity to shelter vulnerable bombers between attack runs on enemy capital ships.

As you can see, Discovery's list of features is ever growing. If you've got any questions about any of the things listed here, feel free to leave a comment below or register an account on our main forum - either should get your query answered quickly. There is also an in-depth document describing the technical functions and workings of Cloaks, Jump Drives and Hyperspace Scanners by Pimper, and Docking Modules, by Charos.