We're looking at Player owned Bases (PoBs) and explaining some of their functionality and uses. This is a part of a number of articles that will look at all of the new features Discovery: Exiles has introduced.

Some time after the initial release of Discovery: Exiles, several important additions were made to the mod. These were the inclusions of player owned and created stations, jump drives, hyperspace scanners, cloaking devices and docking modules. Pioneered by lead developer Cannon, our spin on these classic items have been well received by the Discovery community, which is promising news for our future plans! This article will be focusing on player owned bases (PoBs). 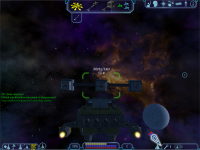 Player owned stations are of course the starting block from which all of the other equipment is sourced. After purchasing a Heavy Lifter transport (or Base Construction Platform, as it is now called) and gathering the prerequisite materials, any player can now construct their own station which they can call home - we've seen them used as jump gates guards, trade centres, forward operating bases, mining depots and many other things. These stations require constant upkeep by importing goods (which can include water, oxygen, food and basic alloy), being aimed primarily at groups of players.

Aboard the station, modules can be constructed to specialise your personal outpost. The heart and soul of the structure is the core module - each core upgrade will also change the station's model, making it larger and more impressive. Another vital module is the shield generator; without a shield to block incoming damage, enemies will be able to make short work of your pride and joy! It's beneficial to construct storage modules to expand your internal cargo bay, and defence modules in order to place weapon platforms outside which can attack hostiles. 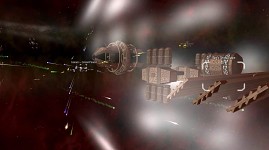 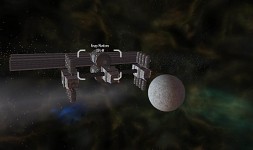 All of the modules and goods a base can construct require huge amounts of goods - a core upgrade alone will need approximately 405,000 units of cargo to be completed. This means it's usually essential to have an active supply network to keep your base happy. This gives trade corporations an advantage, as they have the transports to make large scale deliveries practical - many groups on Discovery RP 24/7 have subsequently chosen to outsource deliveries to corporate player factions. Players in the past have proven that bases can be run by an individual - but it requires an awful lot of time and dedication! 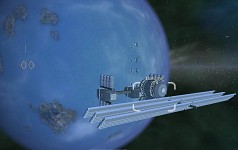 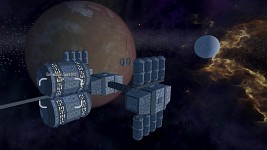 Of course, the construction of bases has also led to concerted efforts for their destruction. Lawful bases in the border worlds, or pirate bases in House space are often targets for 'sieges'. In practical terms, this can involve a large number of players attacking a station continuously, as the station's shields will only block 99% of incoming damage. With enough firepower (usually from battleships), the structure's native repair rate can be overcome. Another method is to starve the base over time by targeting its suppliers. Both methods are brilliant for generating activity, and can ensure both defenders and attackers have something to do.

As you can see, Discovery's list of features is ever growing. If you've got any questions about any of the things listed here, feel free to leave a comment below or register an account on our main forum - either should get your query answered quickly. There is also an in-depth document describing the technical functions and workings of player bases, written by the Discovery forum member Daedric, which can be found here.

Great article. The addition of player owned bases is brilliant!

Thanks Sushi - I'll pass the compliment on to Cannon. Means a lot coming from you! :)

Indeed, player owned bases are something everybody dreamed of back in the day and now it's real! Nice work Cannon!

I am interested in the trade aspect, will the NPC trade ships dock and trade their stuff too? or is it completely player dependant? Is there a way to build one in single player too?

It's not possible to run one in single player since it's handled through FLHook, which is a server plugin. You could run a server for a single person though. Other players can trade with the station if the owner allows other ships to dock to the station.