DESCRIPTION:
Meaning "two-crested lizard" Dilophosaurus walked on two legs, was about 20' long, and stood about 8-10' tall

GROUP BEHAVIOURS:
Hunted in pairs or small packs (3-5), probably contained mostly females with maybe a female:male ratio of 3:1. However, a pair of young males would not be uncommon.

SOLITARY BEHAVIOURS:
"Lone wolves" would not be as common as packs and would usually be males.

HUNTING TECHNIQUES & STRATEGIES:
Packs could take down larger prey. Dilophosaurus was an ambush predator, sneaking up quietly to prey, surrounding it... then the alpha would "spit," blinding the prey before attacking. Depending on prey size, the Dilophosaurus would use discretion with its jaws. The tip of its snout was fragile and could be injured against a large struggling animal, therefore, claws would be its main weapon, only using its jaws on smaller prey that it could kill quickly (we fit into that category). The jaws are perfect for ensnaring small animals. Solitary animals likely hid in foliage and "sniped" at the prey, blinding it before its attack. I have my own hypothesis on the functionality of its snout: jabbing it into its prey through the lacerations that it cut into the prey's softer areas (neck and stomach) and plucking/pulling out vital organs. Sounds graphic, but thats the way predation goes, yeah? Dilophosaurs aim for the face and eyes of attackers and prey and the venomous saliva is a clear foamy liquid which causes permanent blindness if left untreated (rinse with water).

FOOD:
In the wild Dilophosaurus would probably have stalked the small ornithopods like Scutellosaurus that lived in its community, but would also occasionally take down larger prey as a pack such as the late prosauropods and early sauropods. Dilophosaur prey does not exclude other carnivores of its day; "If it's smaller than you, it's prey" is a general rule of predators. In the park this would be the case - anything it could over-power is a potential food source including a "raptor"....if that raptor was alone or outnumbered. A group of 'Dilos' could probably take down a Maiasaur. Dilophosaurus also wouldn't pass up scavenging - it would drive off the killers, if possible, or if it came upon an abandoned carcass.

TERRITORIALITY:
Dilophosaurs would mark their territory by defecation and urination. If approached by a large predator, groups would stand up to defend their territory using threat displays - hisses, screams, head bobbing, and probably flushing blood into their crests, brightening their display colors. A single Dilophosaur would flee, taking the safest choice. If the intruders are smaller, then they may be considered as prey.

SEXUAL DIMORPHISM:
Very pronounced; males have larger and more brightly coloured crests, but are slightly smaller than the females.

ENVIRONMENT:
Dilophosaurs lived in what is equivalent to today's high lattitude rain forests like northwest North America, to the more arid edges of the newly forming Jurassic forests.

VOCALIZATION:
The "hoots" and owl-like calls from the book and movie seem to fit great... except for the rattlesnake-like noises due to a neck frill. Males probably sounded different than females, but there is no fossil evidence of how they actually sounded.

MISCELLANEOUS FACTS:
There is fossil evidence that proves that there was NOT a neck frill on Dilophosaurus, the neck vertebrae could not have supported it. There is however, no evidence saying that they couldn't spit.
Dilos have 4 fingers on each hand, not 3.
Being a Ceratosaur, Dilophosaurus' tail was more flexible and mobile than the other theropods belonging to Tetanurae.

Drawings of the Dilophosaurus (Real Vs. Film) 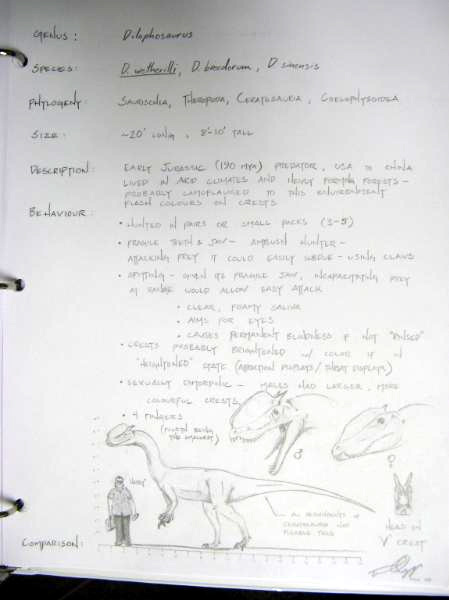 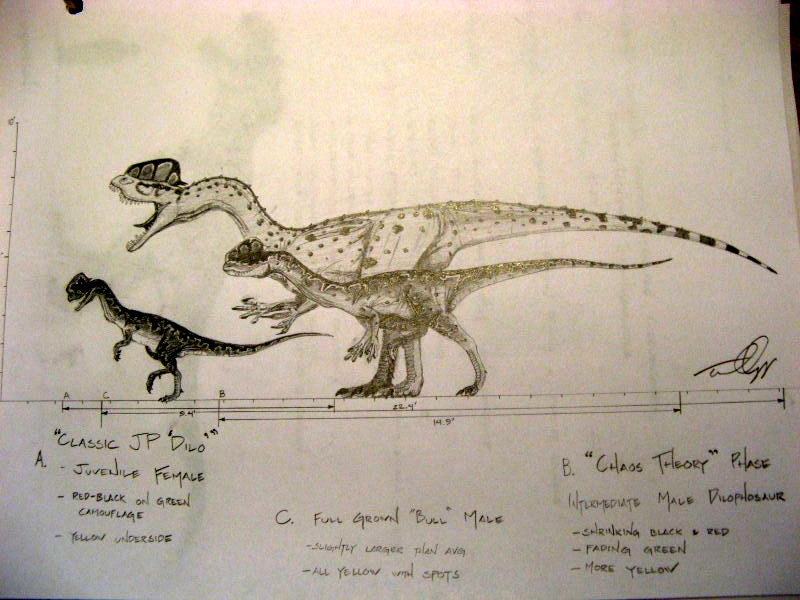 Haha that's really great, keep updating like this, I liked it and so should the community.

Nice concise, yet detailed, information there. Sounds like a few gameplay features of the mod could be gleamed from this aswell. (having to wash the 'spit' out of your eyes in order to avoid permanent blindness?)

Was surprised to see the difference in size as well.

not that it did him much good...

Is it going to have a frill? Despite the fossil evidence?

I can see the T-Rex page under the Dilo page too :P

this is simply awesome!!! you guys thought of everything as far as information!! and i really like the drawings!! great pics, i like the size comparison!

Lovely drawings. Kudos to their creator(s).

sounds like this game could get quite strategic, watching out for feces, keeping an ear to the sky for calls.

my type of game.

good work on the write up, very interesting.

I will probably have to re-upload the last image so it fits on the page. Also I will post the T-Rex write-up next :).

I see from this you don't plan on giving these guys those "neck frills" like they had in the movie and instead going for a more realistic representation of the dinosaur. I think this is a big mistake. While realism is awesome, your game takes place in the Jurassic Park universe and in that universe these dinosaurs had "neck frills." I think as long as you have the name Jurassic Park associated with this game you should follow the source material over what may have been the true reality. It will make for a better Jurassic Park experience.

Non, no lol. We are going to have the dilos with the so called "neck frills". We are staying true to JP however, further on into the game you might see the larger ones that may or may not have them.

Ok, so, Are there any goggles at the JP gift shop for us to pick up so we are immune/semi immune to the blindness? lol.

Hey, that brings me to a great idea, have like, Chances that you will be affected by a dino characteristic, like spit, venom, ect. Sounds RPG-ish, but hey, Fallout 3 got Game of the year and it had similar stuff, so go ahead, add chances! And have goggles simply "Reduce" The chance of infection, or have different types of goggles with different resistances!