How to wage a successful war? Well, the answer to this question is not easy, as so many different factors can influence the outcome of a conflict. However, surely having a better control over the units under your command won't do you any harm. This week, we're going to talk a bit about how we improved the interface.

Another, perhaps bigger, improvement in the interface is a small icon next to the name of the unit. As you can see from the picture below, for land units we've added specific icons for the unit type. Moreover, every unit with an HQ has a specific HQ icon and every unit with at least one engineer brigade has a very small icon. For example, "West Coast Reserve" is a unit composed exclusively by mobile divisions (icon + green colour), one of its division is an HQ (icon) and one of its division has an engineering brigade (very small icon above the icon for mobile units).

Naval fleets are identified by their most important ships: air carries, others capital ships (please notice the difference between BB and CA!), screens, submarines or transport. Moreover, a fleet with at least one naval transport always has a small icon on top to represent it. The icons for air units are simple and easy to understand, the icons are intuitive. Moreover, if a bomber unit is mixed with an interceptor/fighter/escort unit, there will be two icons, to show that the bombers are escorted (the top icon is set in this order: 1) at least one FTR -> FTR icon; 2) at least one INT -> INT icon; 3) at least one escort brigade ->Escort icon). In the screenshot above there are three units with an escort brigade attached.

One more improvement in the interface will let you see with a quick glance which units belong to your country and which are foreign units under your control, thanks to a small icon with a flag. There is also a tiny difference between military control and expeditionary forces: Mongolian units are under military control and the Mongolian flag has a black border whereas the unit from Tannu Tuva is an expeditionary unit and the Tuvan flag has a gray border: 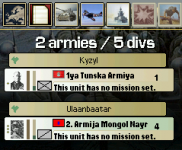 If there is not a country specific icon (like "icon_unit_MON.bmp") then a generic icon is displayed ("MC" for military control and "EF" for expeditionary forces).

To close this Development Diary, here is part of the code involved: