Darkest Hour is very moddable. This dev diary shows you in what ways.

Darkest Hour is a game made by fans for the fans, but more also to a certain extent, we could also say it is made by modders for the modders. Starting today and for the next few weeks, we will introduce you the changes introduced by Darkest Hour related to database and modding. We will show you the changes to triggers and commands, the new event interfaces and the new concepts (you already know there is a decision system, but there are also quite a few elemental additions to the existing event system you haven't seen elsewhere).

Today we'll start with corrections and improvements that we did to already existing triggers and commands as well as the new ones we introduced.
One of the first improvements we made was to take into considerations wars and alliances: we gave the control, owned and garrison triggers the possibility to check for enemies and allies. Obviously, an enemy is a country we are at war with whereas an ally is a country we are allied with. So for example it is possible to check if a specific province is controlled by a specific country or by one of its allies: this will be very useful in surrender chains! ;-)

And now, let's talk about the new triggers we introduced with Darkest Hour. First of all, as someone guessed in our Q&A Session two weeks ago, we can now check control or ownership not only over a province but also over an area or a region. The checks can be performed on allies and enemies too and can involve even a percentage of province: for example we could check as Germany if at least 60% of provinces of the region France are controlled by our alliance. Thanks to the nuked triggers it will be possible to take nuclear warfare into account in surrender chains: now Japan can surrender if Okinawa is lost and it has been nuked at least twice. Another trigger, perhaps underestimated, is the participant trigger which checks if the country is part of the Allies, Axis or Comintern. There are also new checks for buildings (with special checks for nuclear reactors and rocket test facilities), cores & claims, divisions, policies and tech teams that allow a finer tuning and a better control over the status of your country.
Here's a list:

We've corrected the most well-known bugs in event commands (unit stats and change TAG command) and improved the inherit and manpowerpool commands:

code:
- Fixed units stats added by events (example “command = { type = soft_attack which = infantry value = 10 }” ) – those were not applied to newly built units.
- Added “when = XXX” entry to build_division event command to allow serial builds (default value is 1)
- Fixed a CTD bug with undocumented change country TAG command (command = { type = country which = TAG }) – tech-teams currently researching were not removed from research pool. On click game CTD
- Fixed a bug in change TAG command - only minimum provinces were added to nationalprovinces list. Add provinces from extra list too and also claims to claimedprovinces list.
- Addition to inherit command – added value = 1/0(default) argument. When set country will receive all units and production queue too.
- Improved manpowerpool command – added optional [when = 1/[0]] switch. When set 1 add the MP as percentage (value = x.x) of the MP in all controlled national provinces.
- Corrected event command: type = carrier_level value = XXX.X #country-independent bonus to every carrier into a naval combat (Bonus = (OurCarrierLevel - TheirCarrierLevel) / 10). Specified value replaces currently used (it is not additive command). By default this value for all countries is 0.0 (and so the bonus is 0%).
- Extended alliance command (added Axis, Allies, Comintern alliances): type =   alliance which = [tag] [where = 1/2/3] # This country enters in an alliance with country = [tag], [-1] for random country, where = 1 – Axis/ 2 – Allies / 3 – Comintern

The new option for the inherit commands will add flexibility and will avoid having to rely on the regular_id entry on revolt.txt to achieve the same result whereas the enhanced manpowerpool command is very useful for the mobilization process, as you might learn in another DD! ;-)

And now, we're going to have a look at the new event commands that we introduced. We cannot talk about the new trade system yet (you'll have to wait for another DD ;-) ), so let's skip its commands and let's look at the change flag/shield/counter name and skin and change country name commands. We think these are going to be some of the most loved additions, especially by the modders, as these commands have been loudly requested by the community for years. We hope you'll appreciate them! :-)
Other commands that you'll soon grew accustomed to will be the new command to assume or relinquish military control over another country and the commands to secede whole areas or regions to another country: no more typing secede_provinces hundreds of times for the Soviet Bitter Peace! :-D

We regulary add new commands and triggers, or improve the existing ones, whenever we reach a point where it is not possible to achieve a certain effect with those already existing, so this list is by no means final. We might surprise you again in the future!

This is all for now! Next week we'll probably talk about the new event and decision interface! Here's a sneak peek: 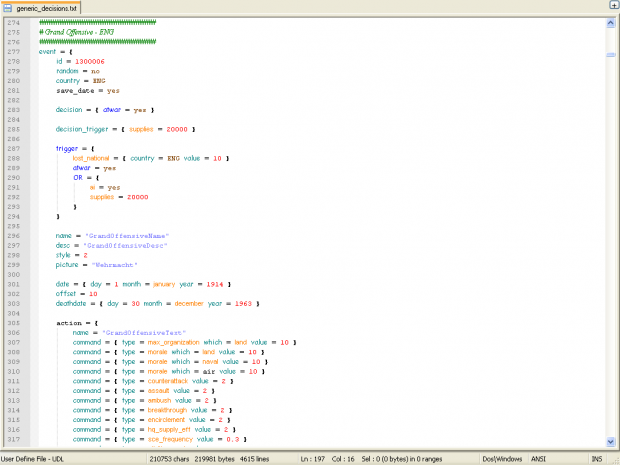