A new update is coming up next week. While it's cooking, our designer and artist, Tuukka, is explaining its main feature - Plain Trinkets.

Hello, Tuukka here again after a loooong pause! I’ve been extremely busy with all kinds of Mushroom Crushing business, but we thought it would be a very good idea for me let go of the game for a second to explain the biggest new feature of MCE 0.97.0 — the Plain Trinkets.

Plain Trinkets are a new Trinket type and, VERY simply put, the lesser of the two. Before you go and dismiss them though, give me a chance to tell you what they offer in comparison to what are now called Unique Trinkets! Plain Trinkets are similar to Uniques, but only offer two positive basic affixes (a.k.a. stats), so no specials, but also, no negatives. We used to call them, perhaps more fittingly, Random Trinkets, since the affixes they provide are random. What further sets them apart from Uniques is that their affixes can often roll higher than what any Unique Trinket offers, especially since they are able to roll the same affix twice. So if you’re lucky, you can for instance get a Plain Trinket with 70% to Fireball power! Talk about ridiculous! On the downside, they are unable to roll some of the more powerful affixes that Unique Trinkets can have, like the bonus to all Spell powers. Also, the more spoiler-y affixes unlock as you progress in the game, so don’t expect to see any Gaia Strike bonuses before you actually get that Spell. 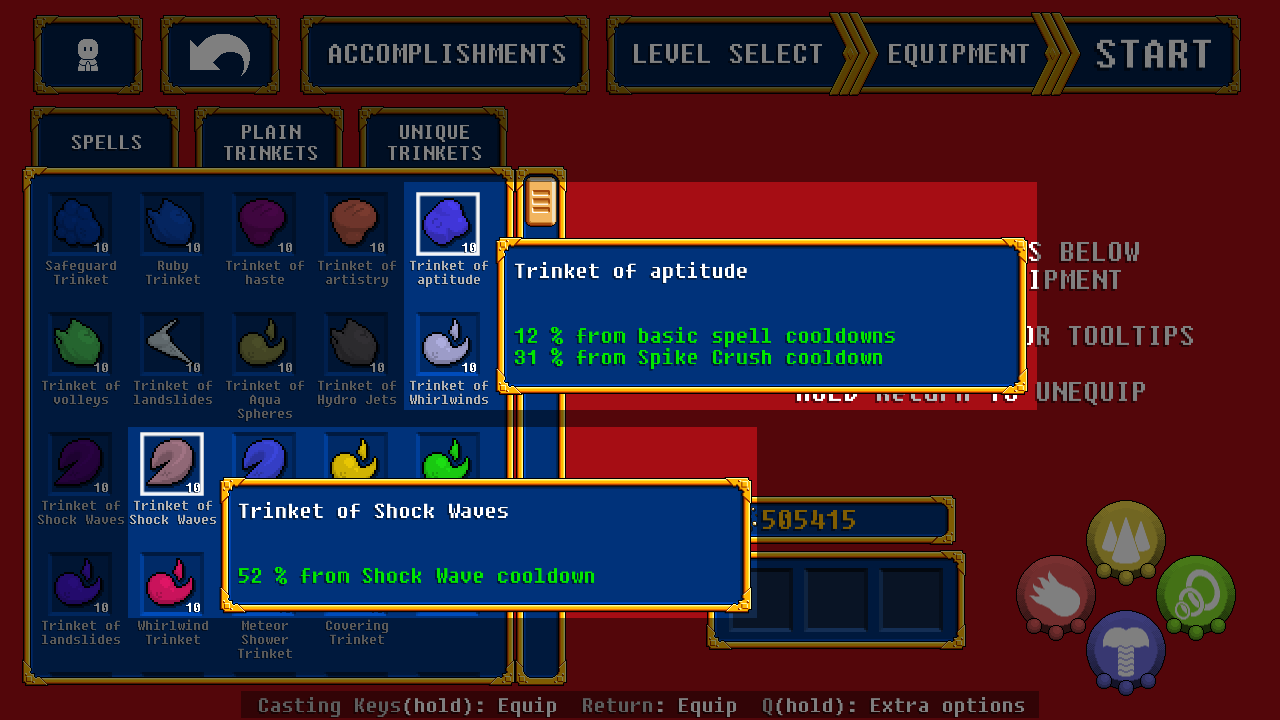 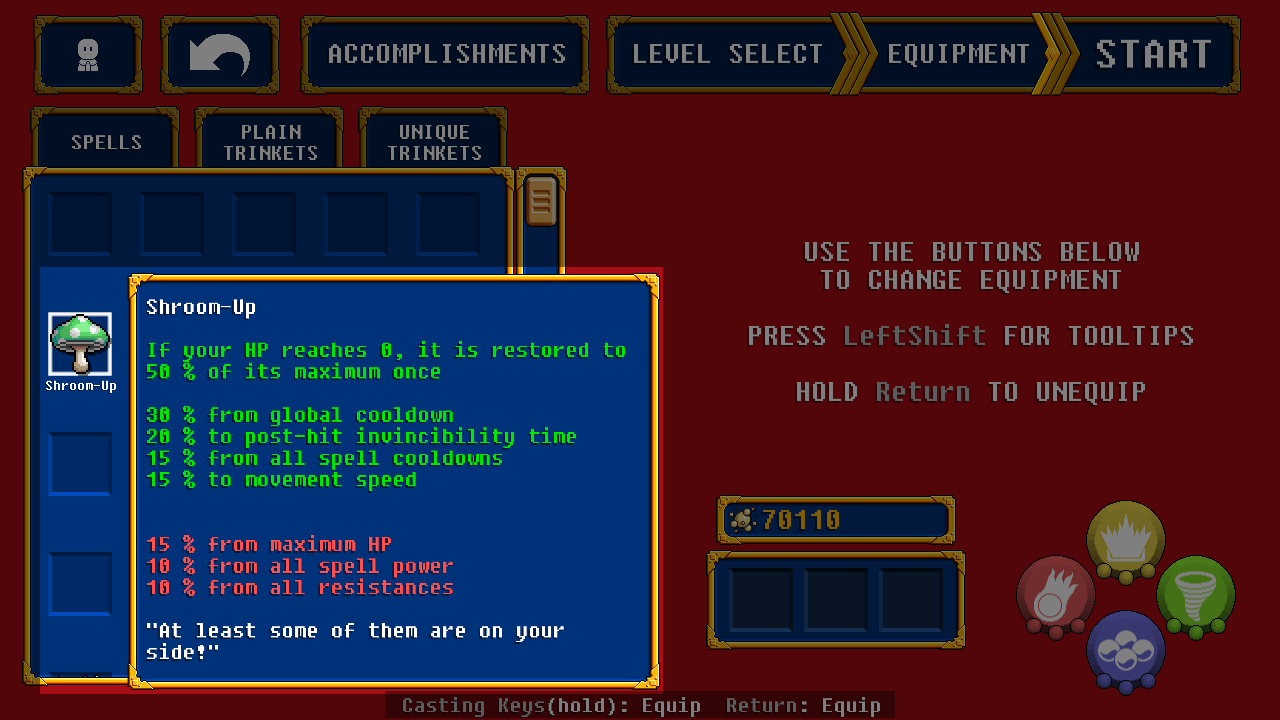 Even the affix values of Plain Trinkets have variation, which at first is just 5%. I say at first, because the roll ceiling actually goes up as you complete Accomplishments, meaning you can get better Plain Trinkets as you progress in the game. This way, at 100% Accomplishment completion, your Plain Trinkets’ roll ceiling reaches its maximum at 15%. Since this introduces a lot of variation in their power levels, they get divided into 5 tiers according to the height of their affix rolls. These tiers are mainly cosmetic, merely adding a fluff word and a new colour to their names. Also, unlike Unique Trinkets, Plain Trinkets don’t have to be bought and can be sold, since they’re not finite like Unique Trinkets. You won’t be getting rich with them, but at least you get something for keeping your inventory clean! 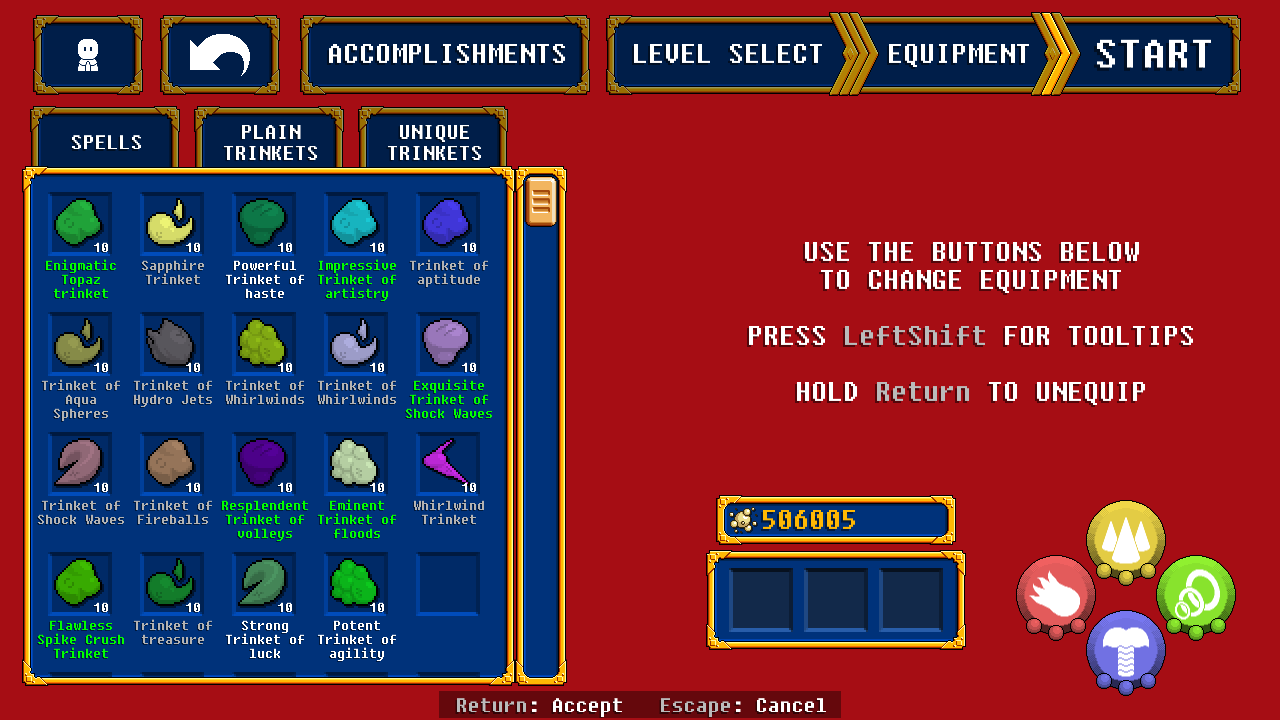 Speaking of nonfinite, the Plain Trinkets’ looks. As there is no limit to their quantity in the game, their graphics had to be random too. Right now, each Trinket gets assigned a random base graphic from among a small (for now) selection. Additionally, the graphic is coloured randomly to further set them apart from one another. They’re limited to lighter hues, since very dark colours look similar, not to mention boring. I blame blue. You’ll probably run into similar looking Plain Trinkets eventually, but what can you do. One of the challenges with the graphics was to make them clearly distinguishable from Unique Trinkets, which is why their looks are somewhat similar across all the different variations.

Now that you know what Plain Trinkets are, what they do, and what they look like, you may be asking why we’re adding them to the game. Well, one of the problems we have is that we don’t have much variety in Accomplishment rewards. Most of them give Spores, which just isn’t interesting. Giving out Plain Trinkets every now and then should help with that a lot. Don’t get me wrong, I would LOVE to be able to dish out enormous numbers of Unique Trinkets, and give those as rewards instead, but they require a lot of work. For now, no Accomplishment gives Plain Trinkets, but in the future this will be the case, with Uniques becoming more sparse and pushed a bit later into the game (so unlock those Unique Trinkets now before they become harder to get!). I hope this will make them feel more special. Plain Trinkets are designed as entry-level Trinkets, and should serve well as an introduction to Trinkets in general. I also feel that they are sufficiently powerful and different enough from Uniques to justify themselves even in the late game. And if you think we came up with them yesterday and just wedged them in… haha, no. Plain Trinkets were supposed to be a feature from the very beginning, but didn’t originally make it in because of time constraints, so stop poking me. :<

Not that Plain Trinkets didn’t give us their fair share of trouble though! Perhaps the biggest change is the fact that we had to add two new key binds to the game! If you’ve played the game with a controller, you might have discovered that camera zooming is easily accessible for you from the shoulder buttons. Now it’s readily available for keyboards too! The default keys are Q and E. Because of this, zoom level was removed from the options menu. So now Q is used in the Plain Trinket menu for bringing up a small sub-menu with all the functionality we would have otherwise needed a new pop-up menu for. Pop-ups are just a very… clumsy solution, so we want to avoid them.

If you hung with me this far, I might as well show you the drawing process of some of the Plain Trinket graphics! Some of them just came to me like nothing (the middle one), but some required a bit more effort, like the two bottom ones. It’s interesting to realize the different starting methods in action here. Of the top one I actually had a pre-existing 3D-idea in my head, which is rare for me. The graphics in the middle began with my usual technique, drawing the outline first. With the bottom one I tried something new, just drawing a random doodle and polishing that.

That’s about it, I hope you’re looking forward to Plain Trinkets in the update next week! As always stay tuned for more, feedback and suggestions on our Steam forums are always welcome and so on. Until next time!