On the surface Glyph Quest and Super Glyph Quest may look like standard match 3 games, but what sets us apart is our Chain, Reversal and Combo spell mechanics.

First up I'm making the assumption that you know what a match 3 game is. If not, typically these are games that present a player with a grid full of icons and the player needs to match 3 like icons together to get points. Games in this genre to look at are Bejeweled, Candy Crush Saga 10,000,000 and Puzzle and Dragons.

When we started making Glyph Quest the idea was that it would be a little puzzle game to teach me some Unity. As soon as it became 'plan A' and we were developing the game to release and support us, we needed to make it much more than just a simple puzzle game. We needed to stand out, we needed an edge/hook that the other match 3 games didn't have. And there's a lot of those out there to compete with. (Pro tip: don't make a match 3 for iOS as your first indie title...)

At the time we were heavily into Puzzle and Dragons, 10,000,000 and Dungeon Raid. We decided that we wanted to make something in the puzzle RPG space and came up with something similar to Puzzle Quest - match elements together to cast spells. Again this is something that has been done, so how were we going to make this game different? 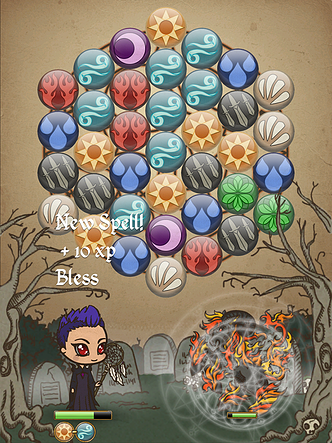 Our first big difference is that the new glyphs don't 'drop in'. When playing other match 3 games, once you have matched your icons together they disappear and everything on the grid drops down as new icons drop in to fill the gap left. This is usually where the player will experience chain reactions, where the icons slotting into place connect with more the same and they to disappear having been matched.

We don't do this with Glyph Quest. Because we have a 'round' grid of glyphs, making it so that the glyphs would fall into place in a predictable manner wasn't easy - and for the traditional match 3 the player needs to be able to see where the other icons will fall to create these chain reactions. Leaving this and the new glyphs that would place on the board to chance seemed like we were taking too much ownership away from the player. And we wanted the player to be able to create chances, to own the glyph board and the battle.

So we needed a new method of getting the new glyphs on the board. This was simple enough - we replaced the used glyphs with new ones and moved nothing. Now we were missing the chain reactions that make this genre so addictive and rewarding.

So we borrowed from the RPG world. Instead of chain reactions we had a damage multiplier. By the player casting spells of the same element over and over they would keep building their chain and increasing their damage multiplier. Hurrah! We had a strategic element. Suddenly playing the game felt very different. Instead of simply finding 3 (or more) like glyphs to cast a spell you were working out how to use all the same glyphs you had to cast the most possible spells.

But then we hit another snag. At some point you would have to break your chain, and this wasn't a great feeling. There is nothing more disappointing then looking at the board and not having a way to continue the chain. Now you can keep casting null spells (combinations of glyphs that are not a combo spell or backfire) until you get the glyphs you need, but chances are the monsters will have bested you before you get there. So we needed to put a positive spin on it.

Reversals were our answer. Between Glyph Quest and Super these have changed slightly but the idea is the same, you build up a chain in one element and then cast a spell of it's opposite* for a massive damage bonus and to migrate your chain to the new element. In Glyph Quest this has you flip flopping between to opposing elements, in Super the spell parser is far more robust and the inclusion of combo spells means your chain can migrate across the elements. 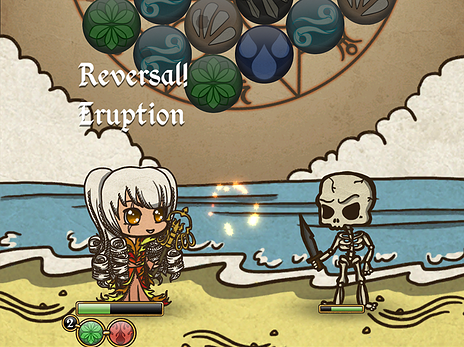 When we started designing combo spells we went full Magika. Players throwing elements together to see what spell came out the other end. Then we had to rein it in. That puts a lot of possible spells out there (unless we capped it with a spell book you could learn), we only had 4 months to develop Glyph Quest so we needed a much more practical solution (that's not to say it's idea we've left entirely in the bin). Combo spells became 4 glyphs in length and alternating A-B-A-B providing A and B are not opposites a spell would be cast, also B-A-B-A would cast the same spell.

In Glyph Quest what element you cast in the A or B slot was important as the first element you cast determined your chain. In super we were able to make the parser much more robust so your chain would continue providing there was not a reversal. This means you could follow Fire-Air-Fire-Air with Dark-Fire-Dark-Fire and the chain would plus one. Because increasing the chain was much easier we had to balance it out a bit, so now reversals will still do the bonus damage but will half your chain.

What we wanted when we started this was to create a game that was fun and addictive, the kind of game you think you've been playing for 10 minuets when actually it's been an hour. By trying to stand out form the other match 3 games out there, we came across a number of challenges. To keep the gameplay compelling, the mechanics we implemented to overcome those challenges added layers of tactical play that if we had set out to design from the outset I doubt we would have accomplished so well. By continually iterating on ideas we came out with much more than just a match 3 puzzle RPG!

*each element has an opposite: Fire-Water, Earth-Air, Light-Dark and in Super Glyph Quest Metal-Primal.