Are high-powered mobile devices creating a new type of gamer that defies categorisation along the old scale of Casual vs Hard-core? Having just pushed my new game into the App Store review pipeline with screenshots and video previews that come close to the size of my monitor I know I'm going to have to rethink what mobile versus desktop means these days.

The screenshot is from an iPhone6 Plus and is 2208x1242 pixels. That's crazy. The CPU horse-power and battery life is pretty nuts too. Only a few years ago that sort of display and horsepower on a gaming rig would be something to crow about and now it fits in your hand (if you have a really big hand). 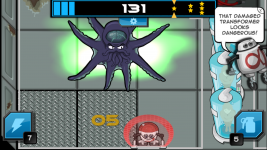 What's interesting to my way of thinking is that devices like these new phones and tablets are changing what gamers are actually doing in their experience of games. Some of my friends consistently play a small number of games and want to get really good at them: like me, they hate that time where you suck at a game and feel like a noob. But other friends try out a lot more new games, dipping back into them for a while when a new DLC or refresh comes out.

And here's the interesting thing: with Twitch and YouTube, not to mention other sites like SlideDb hosting lots of content you can get on your mobile device and hoover up game experience by proxy, watching great players ace those moves that you just don't have time to invest in mastery of. For my friends that prefer this new style of grazing, they don't want some game to demand too much of them all the time - sure occasionally they'll play Titanfall or whatever and have that controller or mouse in a death-grip; but they're just as likely to be on the couch playing Hearthstone on the iPad, or watching a VOD of the League of Legends champs.

Also if I want to dump something to my friends to bitch about that totally OP unit or hero, its going to be easier on my touch device where all that social stuff is hooked up and just a swipe away. Even with sharing and streaming more built into consoles; and games having great support for clans and chat, that grab a screen-shot and quick share is still easier on a device.

My friends that game like this they would never want to be referred to as casual gamers - they take what they play seriously - and yet mobile devices are a bigger part of their games experience these days than their computers. Its an interesting trend I think. And its one that games developers like me need to think on.

Is casual-core a thing now? Let's check our assumptions and maybe we need to change what we do. What do you think?