I've been posting a lot about the thought process of Building Block Heroes in recent weeks, so for this week's update I thought I'd talk a bit about the first area in the game, Jollyville.

I've been posting a lot about the thought process of Building Block Heroes in recent weeks, so for this week's update I thought I'd talk a bit about the first area in the game, Jollyville. 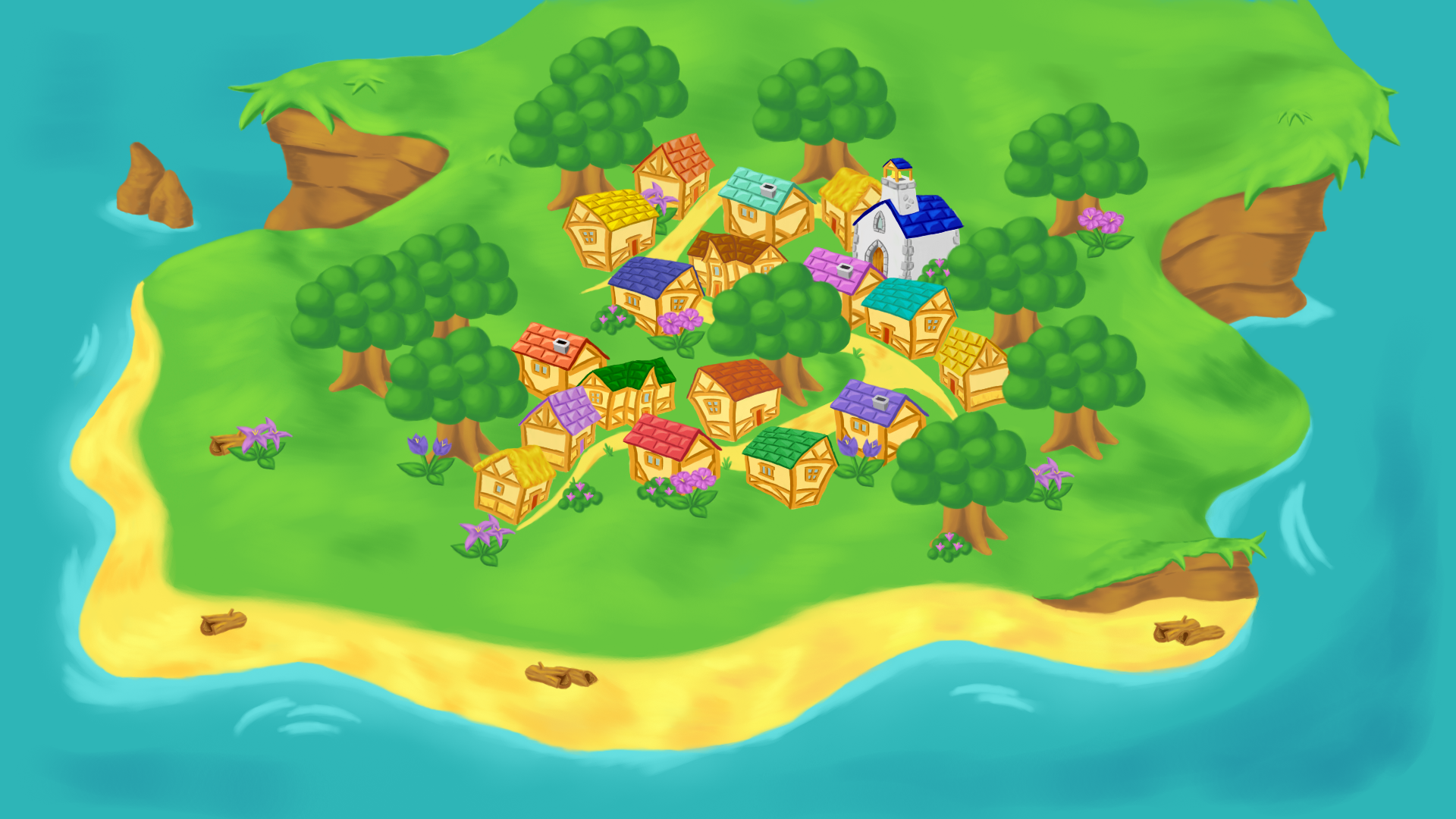 As the name suggests, Jollyville is the town from which the Jollyfolk have been abducted by the neighbouring Mechafolk. It's a pleasant and bright place, a simple town for simple folk. 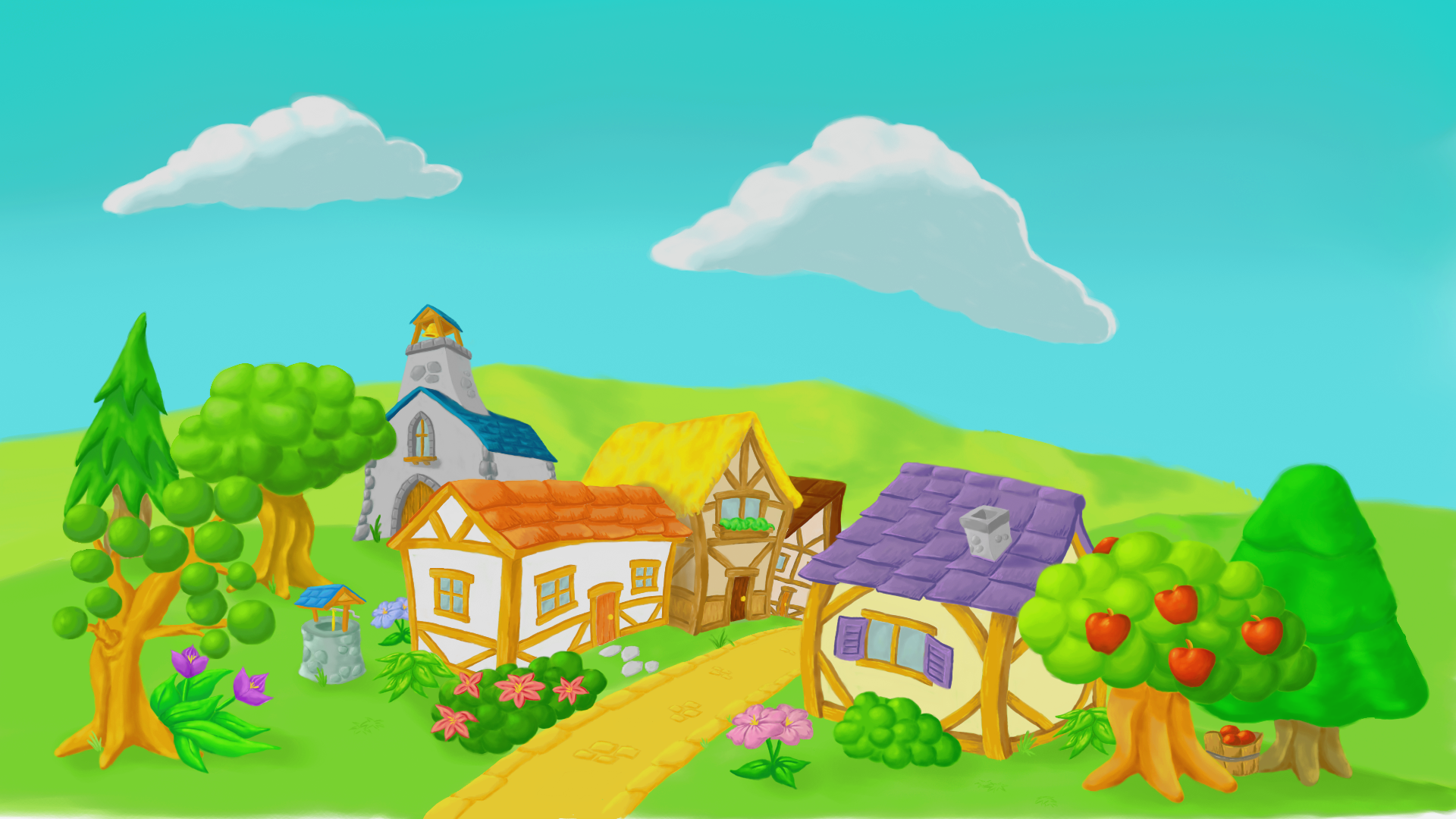 Jollyville is the starting area of the game, and as such is meant to be fairly non-threatening. There are no real obstacles or challenges placed in the player's path beyond the basic gameplay of using blocks to save the caged Jollyfolk.

It features several tutorial levels unlocked gradually in order to ease the player into becoming more familiar with the core game mechanics. The first tutorial, in particular, is a bit longer and changes depending on the game modes and options. 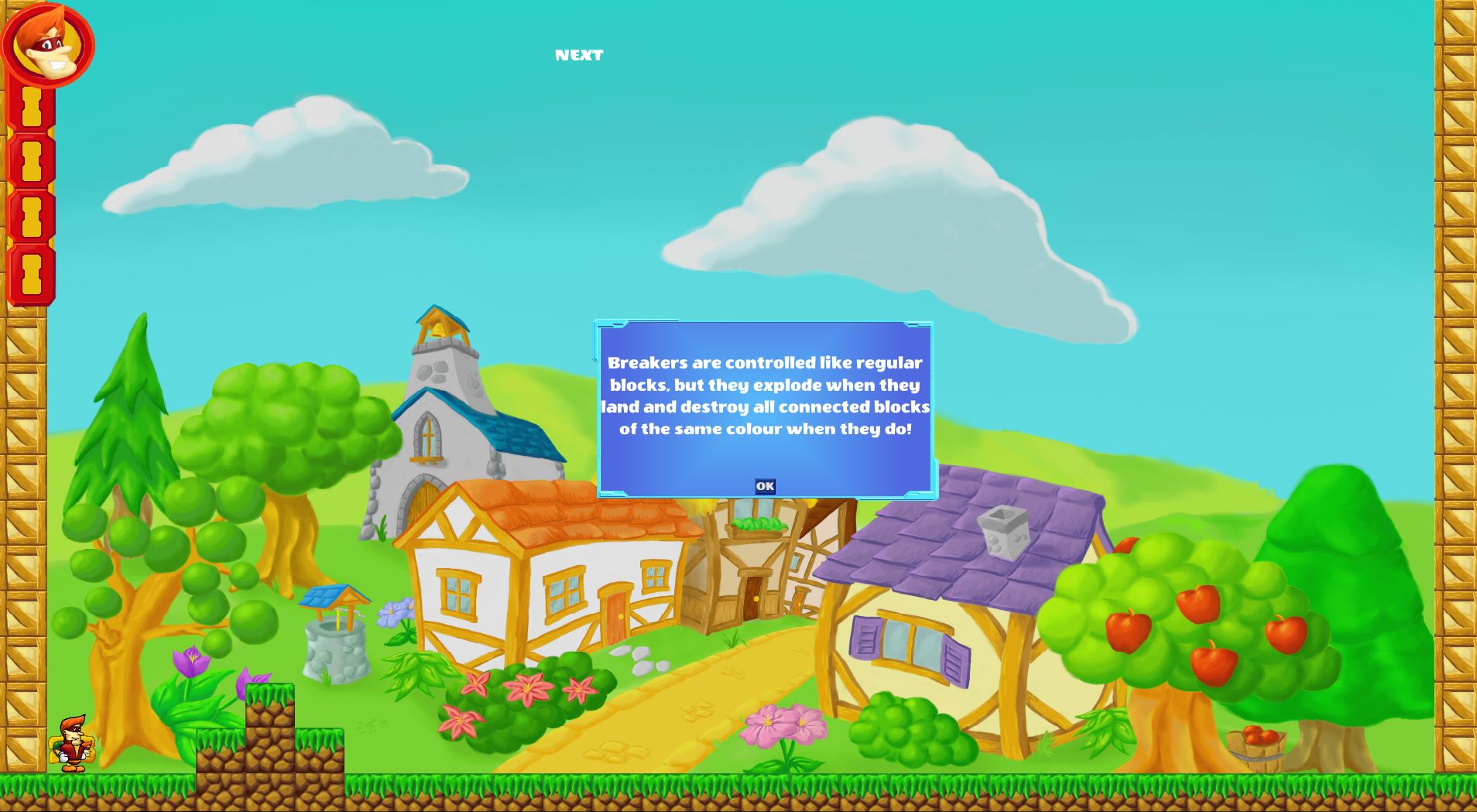 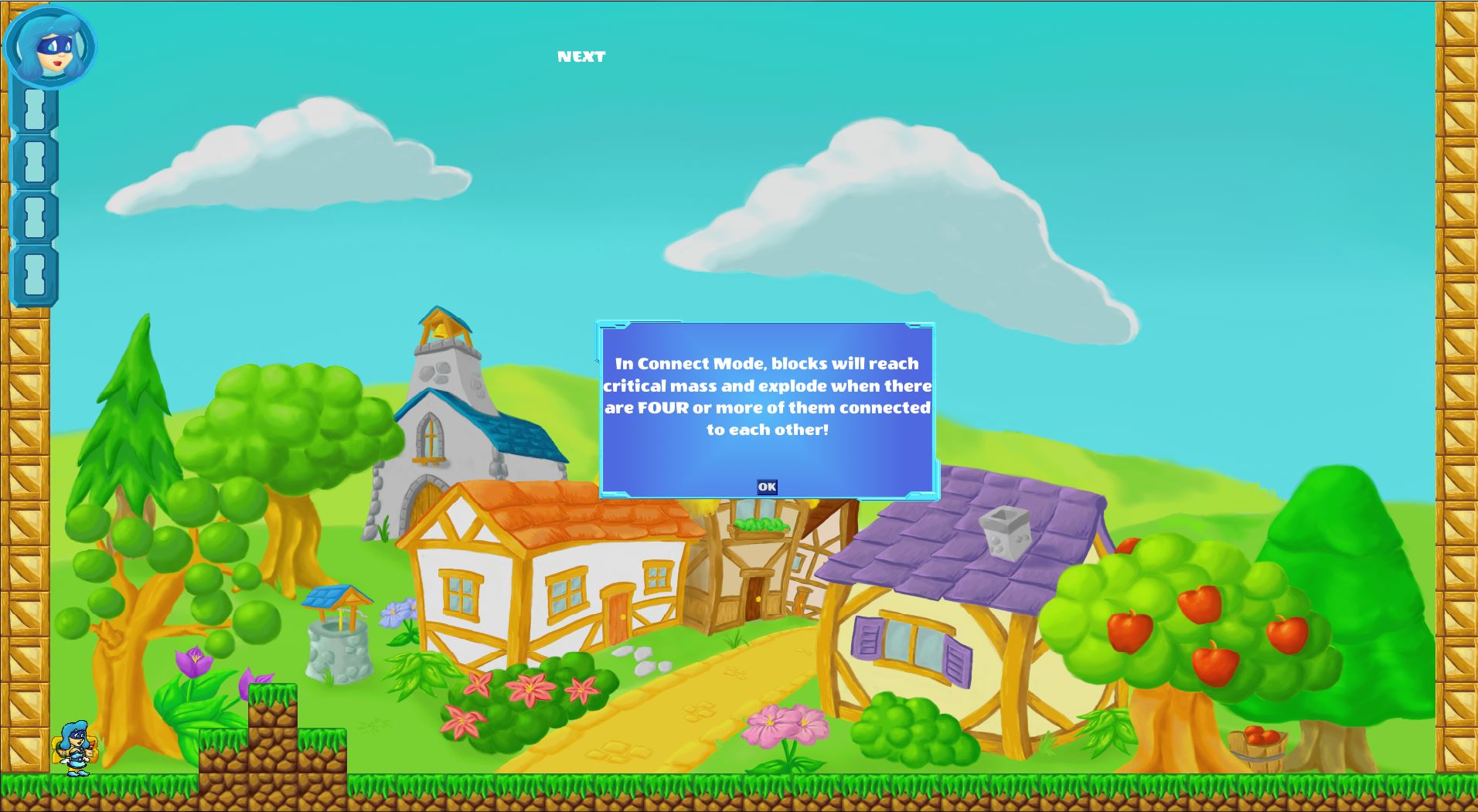 Eventually, enemies are introduced. Enemies - with one exception - generally just walk around and get in the way rather than actively undermining the players. The enemies in Jollyville are about as simple as it gets - they just move back and forth, turning around once they reach the edge of a platform.

Finally, the concept of bosses is introduced in the final tutorial level of Jollyville. 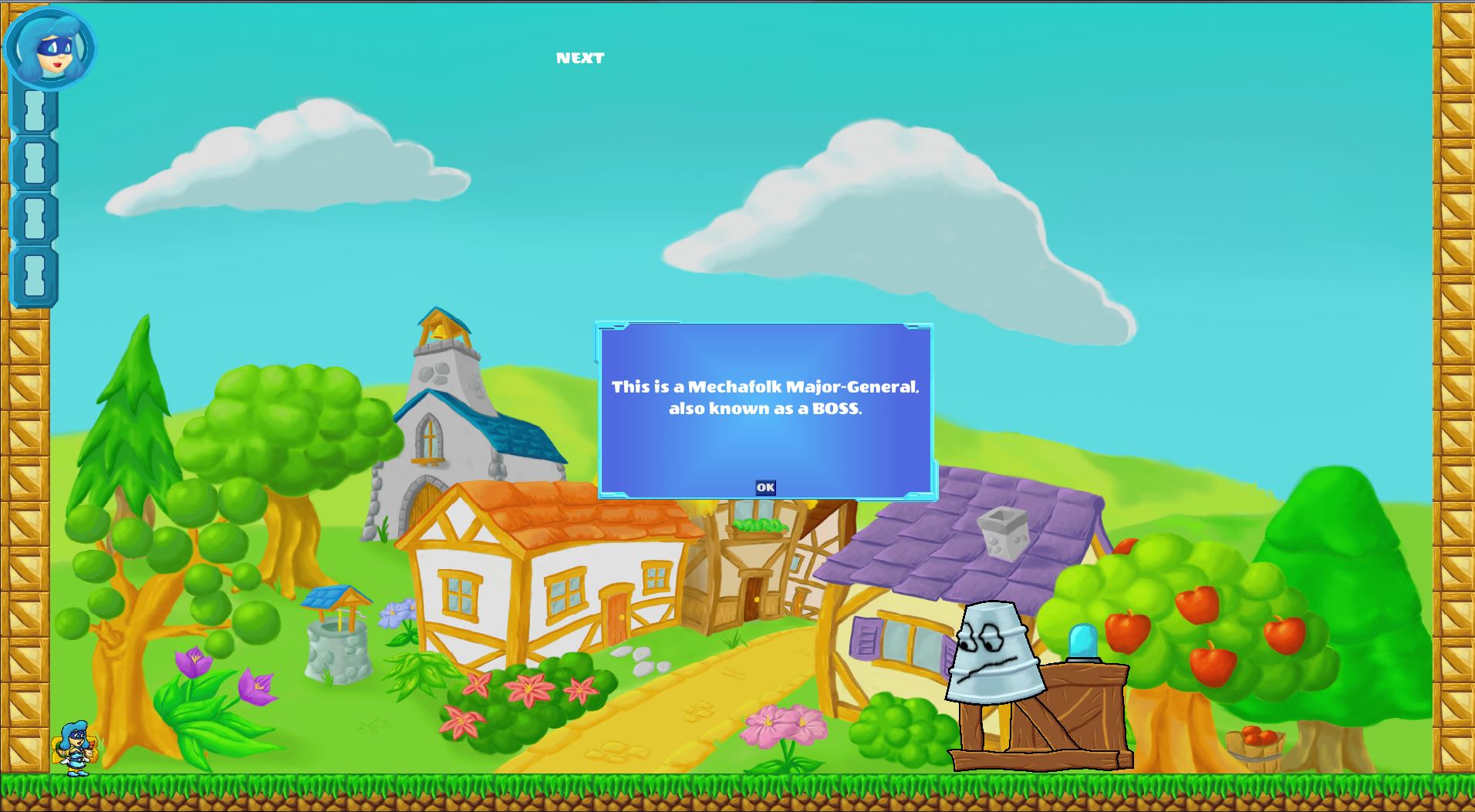 Bosses in this game aren't attacked directly. In keeping with the theme of the game, the players need to use blocks to reach the glowing blue killswitch located on the boss itself. The boss of Jollyville is a fire-breathing dragon-type Mechafolk who mostly just stands in one place and shoots fireballs at the player's blocks.

The first boss is meant to be rather simple, given that it is the first that the players face. The fireball itself is two blocks high and travels in a horizontal path across the screen. That's it! Players shouldn't have too much trouble with him.

Jollyville was inspired by Disney villages and starting villages of other games, so I tried to focus on bright, welcoming colours. I also made the town "zany" by exaggerating the proportions of the buildings and getting a bit creative with the tree designs. 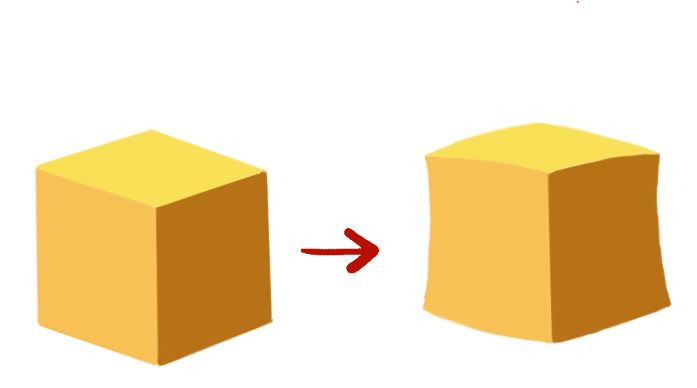 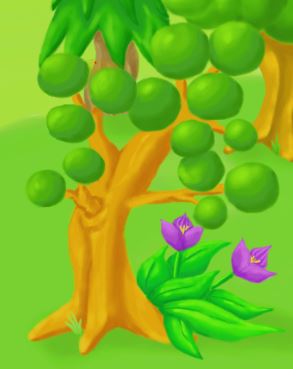 Generally, I tried to enforce a consistent colour scheme for each area to give them more "character", but Jollyville is the exception. If there is an overall colour palette I suppose it would be the light green and sky blue of the grass and sky respectively, but ultimately I took the opposite approach and tried to incorporate as many colours as possible by injecting colours in places where I felt there was too much green. 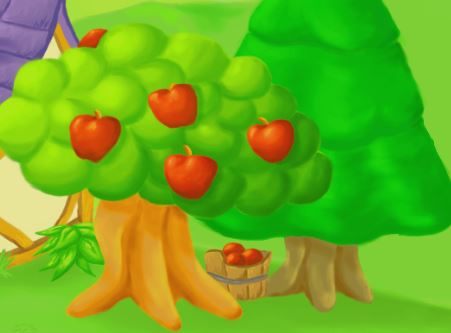 Jollyville's "character", then, is its lack thereof, in keeping with its status as a standard intro town. I like to judge the overall feel of an area by how it looks as a thumbnail, and a simple glance at Jollyville's thumbnail shows that no one colour really stands out. Rather, the colours used are relatively basic and varied.

The music for Jollyville was inspired by bright and jolly platformer games like Super Mario World or Klonoa. I wanted it to sound "bouncy", which is a difficult feeling to quantify. Jollyville's musical theme, therefore, started off as a simple "bouncy" percussion theme before I added the melody. The melody itself goes up and down, bouncing from high to low and back again, in keeping with my goal of composing a track that players felt like skipping to.

I plan to talk about the areas in the game one at a time in detail, and Jollyville was just the first. I hope this was an interesting read!