The continuing delve into the history of BrewLAN's experiments.

Welcome back to BrewLAN: An Experimental History, part two. 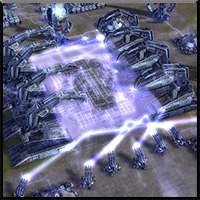 Today we will start off with another UEF experimental building, the one that supplanted the Doomsday Machine from part one in fact; the experimental factory named 'Gantry'; and how it came to be. A comparatively recent addition, I had been planning something like the Gantry for a while, with various ideas for what it could look like and any special features it could have. Most of which had basically already been done in Total Annihilation or in mods for Total Annihilation. It probably would have gotten put off indefinitely like most other experimentals if it wasn't for a 'eureka moment' I had whilst pondering the possibilities of adding in a side distraction in the form of being able to capture and do stuff with civilian buildings, Tiberian Sun style. I was browsing through the units available to be spawned on the with the Alt-F2 menu when I came across the Black Sun campaign units from the base Supreme Commander, and found a seemingly insignificant crane which was virtually identical to the build arm cranes found on the UEF Air and Naval factories, but bigger and better detailed. I immediately knew how I wanted the unit to look and did the first play test of the unit in a real game a few hours later that night. Aside from the minor details it was basically done.

The hard part was getting it to build experimental units properly, which is where it got messy. Since the way a unit is built is determined by the unit itself not the thing building it the Gantry ended up having to have a blueprint of the unit placed next to it to build it. The work around is really awkward, it involved changing the real Fatboy to be buildable only by the Gantry then creating a fake Fatboy for engineers to build, which then replaced itself with the real one and passed over any damage it had when it finished building so no one would notice the difference. The Atlantis on the other hand gets stuck and refuses to leave without making it submerge first. 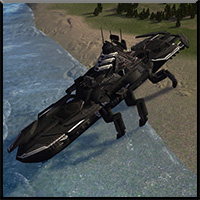 Second up today we have a unit that went through several iterations before ending up the way it is today; an unfinished weapon-less battleship with legs that doesn't realise its big enough to stomp things. The original idea for the unit was something like a cross between the Sea Shadow and a Houbei class missile boat. Then I thought a battleship with legs would be cool, which led me to compare it to the Megalith, and decided that being a reverse of the Megalith and a massive Magic: The Gathering reference (by being called the Abyssal Persecutor) would be fine too. I plan to eventually give it a big black rape laser, and call the laser cannon the 'Doom Blade'. Eventually. 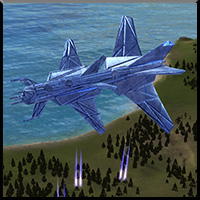 The third experimental unit for the day again comes from the UEF. This time in the form of an experimental gunship named the AC-500 Centurion. I would like to mention at this time that this unit dates back to pre-SupCom 2. For the sake of testing ideas and scripts I borrowed the model from an old TA mod I can't track down any more (I think it went down with Planet Annihilation) and named the unit after it in homage to that particular unit. The guy made good units I just wish I had a record of something to link back to.

Anyway, back on subject. For the longest time after initially being put into the game it was basically just a flying lump, with its only usable weapons being the rear mounted AA guns, and a forward missile launcher that occasionally decided it wanted to fire. I've never really known what I want it to look like, other than something like either Centurion, or the Wyvern (both of which from that old TA mod). Incidentally, the AC-1000 from SupCom 2 does look almost identical to how I remember the Wyvern from that mod looking. But the Centurion was the cooler one of the two.

The entire thing will be getting almost totally remade once I get a final design and model down for it. Maybe something inspired by that thing off the Avengers. Maybe. 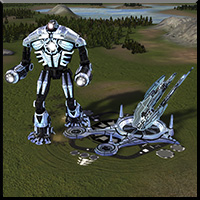 The next one is an interesting story of hiding and deception. The Aeon Salvation. Initially pegged in Forged Alliance as a 'Tech 3 Rapid-fire Artillery' it was secretly an experimental in disguise; costing about the same as the Mavor and the Scathis and being more damaging. Its being tech 3 was another relic from times past, like the Scathis' ability to move, where it being T3 actually made some sense. I stripped away its tissue of lies and recategorised it as an experimental. This has basically no impact on game-play, much like my change of the Galactic Colossus, for which I increased the health by 1. From 99999 to 100000.

And that is the entire history of BrewLAN and experimental units, or at very least experimental units that ever got any actual implementation, there are others that have only made it as far as a being a footnote on my ideas list. So until next time, this is me, signing off.

Part 3 will be a while yet, at the moment the only tale to tell on it would be how the Solaris (the Aeon T3 transport) almost ended up as an experimental. And that isn't a long story.

I am looking forward to the experimental leged battleship. There must be three Monkey Lord-microwave laser on it, to give it a battleship character. Two integrated cybran-T3 torpedo launcher is obligatory and also two landing platforms and of course three SAMS.

me too I love experimental of all kinds