In this article we will cover everything about Aldmeri Dominion's spellbook

One of the most interesting features of the Battle of Middle-earth series, distinguishing it from both the Command and Conquer-style RTS and other representatives of the genre, is the so-called spellbook. Of course, in our mod, we could not pass by such an interesting feature and therefore it is time to talk about the Aldmeri Dominion spell set.

OUR AND NOT OUR ANCESTORS

The division into "good" and "evil" factions in the game led to the fact that the spellbooks of the factions from the corresponding side rely on one of two magical powers - the light of the Evenstar of Earendil for good and the power of the One Ring for evil. In the Battle of Tamriel, the division into good and evil, as in the TES series itself, is conditional, and therefore we gave these visual differences of the faction spellbooks a more religious shade. Some factions in mod will rely on the power of Aetherius, the divine plan, where the so-called Aedra live (“Our ancestors” in translation from the Altmeri language, who consider themselves descendants of the gods), and others - on the magic of Oblivion, the realm where the spirits of Daedra live (“Not our ancestors” in the same Altmer language). It is worth reiterating that the difference is rather arbitrary, since some factions relying on the power of Aetherius will also have abilities that summon the inhabitants of Oblivion to the battlefield, which you will find out about this pretty soon. So, let us start to analyze the factional abilities of the Aldmeri Dominion. 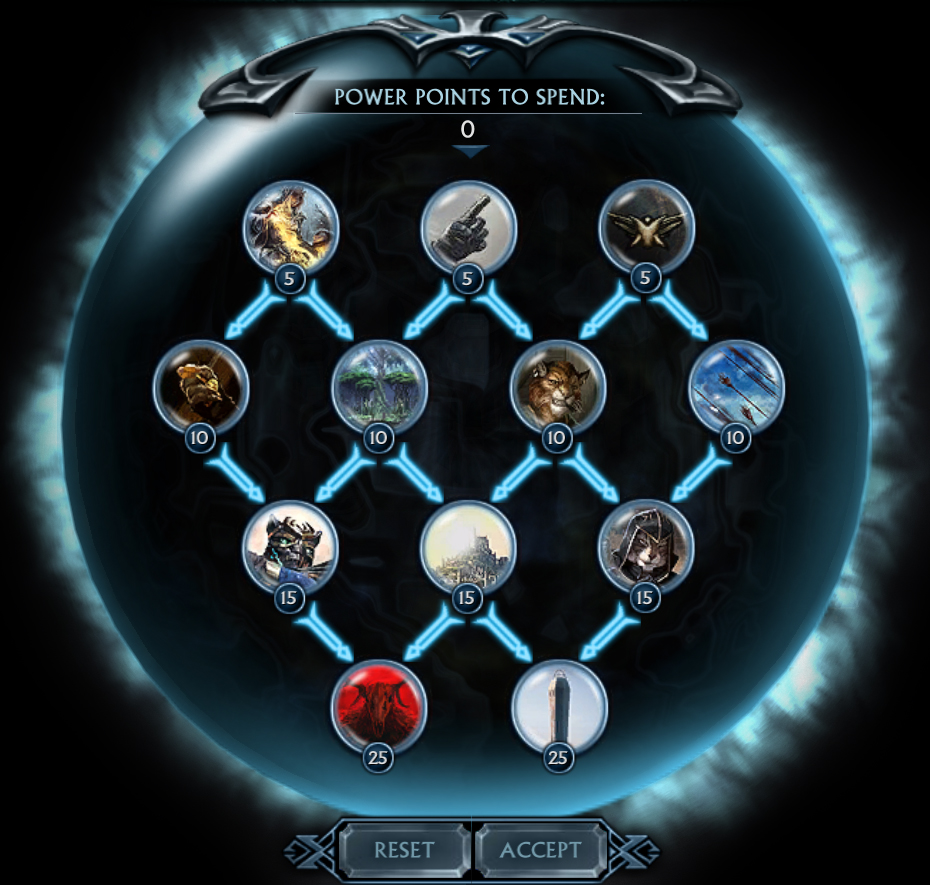 In order to balance the factions' abilities, we decided not to deviate very far from canons of the game in terms of creating the first tier of Aldmeri spellbook. Throughout this spellbook and all the ones that follow, you will often see abilities in the first line that are familiar to you from the original game, although we sometimes allowed ourselves to make creative retreats or reinvent familiar spells. However, in the first level of the Dominion spellbook, you will find familiar and almost untouched, aside from the visual and sound effects, abilities of the Elves faction.

Restoration
The School of Restoration, though often underestimated by the sorcerers of Tamriel, is one of the most commonly used. The Dominion's spell arsenal will have enough resources to keep its fighters in good health, but this ability is the easiest and most affordable way to do it.

The “Restoration” ability fully restores the health of units in the selected radius, and also returns one fallen soldier to the ranks.

Thalmor propaganda
The Thalmor closely monitors not only external and internal enemies, but also the maintenance of order and morale in the ranks of the Dominion soldiers. The loud, clear and inspiring shout of the formidable Justiciar, vigilantly watching the battlefield, is able to compel Queen's warriors to fight with unprecedented zeal.

The “Thalmor Propaganda” ability gives a standard buff for units in the selected radius - + 50% Armor and Damage.

Espionage
As we said, Thalmor is a vigilant organization. They are always ready and always know what is happening in the enemy's territory in order to attack suddenly and frustrate his plans, or to be prepared for sudden aggression. Everyone in Tamriel knows that Thalmor sees and hears everything and strikes suddenly.

The "Espionage" ability reveals a selected area of the map to the player's eyes for 30 seconds. In addition, allied units located in the territory where Espionage was applied receive a bonus to vision and firing range.

Baandari Opportunists
Baan Dar, a robber god and patron of thieves and beggars, especially revered by the Khajiit. It is said that Baan Dar comes to those who are in the most desperate situation and helps them with gifts and a sudden opportunity to get rich, which is especially interesting for the philosophy of the Khajiit, which treats theft as a matter of course.

The ability "Baandari Opportunists", when applied, allows all Khajiit units and heroes to receive money from killing enemy units and buildings for the next minute.

The Smiling Scum
Renrijra Krin or “The Smiling Scum” is a Khajiit anarchist movement operating on the border between Elsweyr and Cyrodiil’s County of Leyawiin, who believes that Elsweyr, and with it the lands of Leyawiin, should not obey the Empire or even Mane, the spiritual leader of the Khajiit, but be free and independent of any laws. The Renrijra have a flexible moral code and don't shy away from being simple mercenaries if it benefits them. What the Dominion skillfully uses. 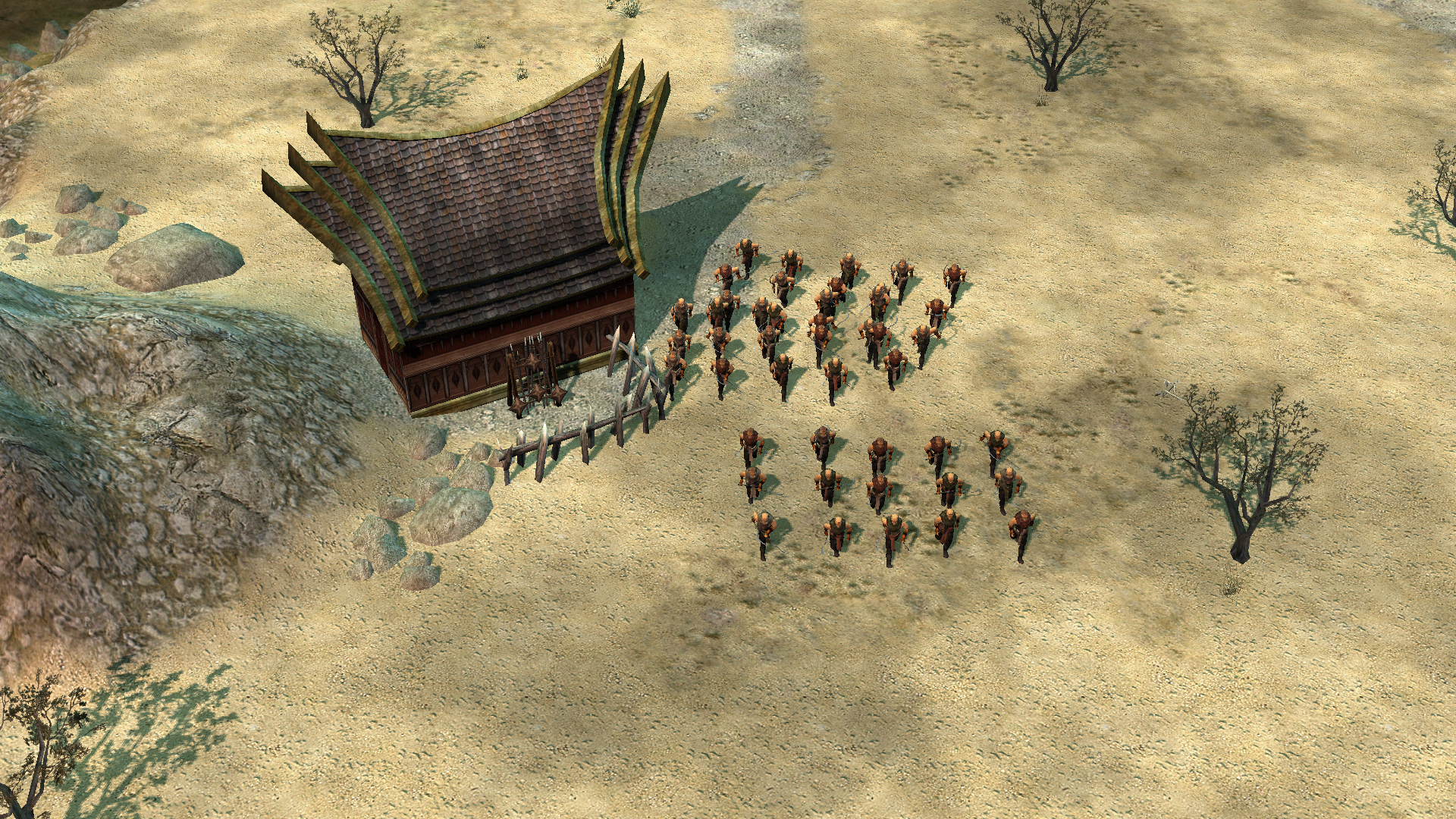 “The Smiling Scum” ability allows you to summon three squads of Renrijra Krin, fast twin-bladed warriors who can switch to throwing axes, to help the player. An interesting fact - Renrijra Krin also benefits from "Baandari Opportunists" ability, which can at the right time not only help to defeat the enemy's army, but also make good profit on it.

Elden Grove
The forest is a sacred place for any Bosmer. Many of them enter into the so-called Green Pact, an agreement with the forest god Y'ffre that Bosmer vows not to harm all vegetation. Among the ancient trees, the people of Valenwood feel at home, and their fellows can count on not only their support, but also Y'ffre's blessing.

The ability "Elden Grove" allows you to lay a forest on the selected area. All Dominion units in this forest receive bonuses to Armor and Damage, and Bosmer units and heroes become invisible. 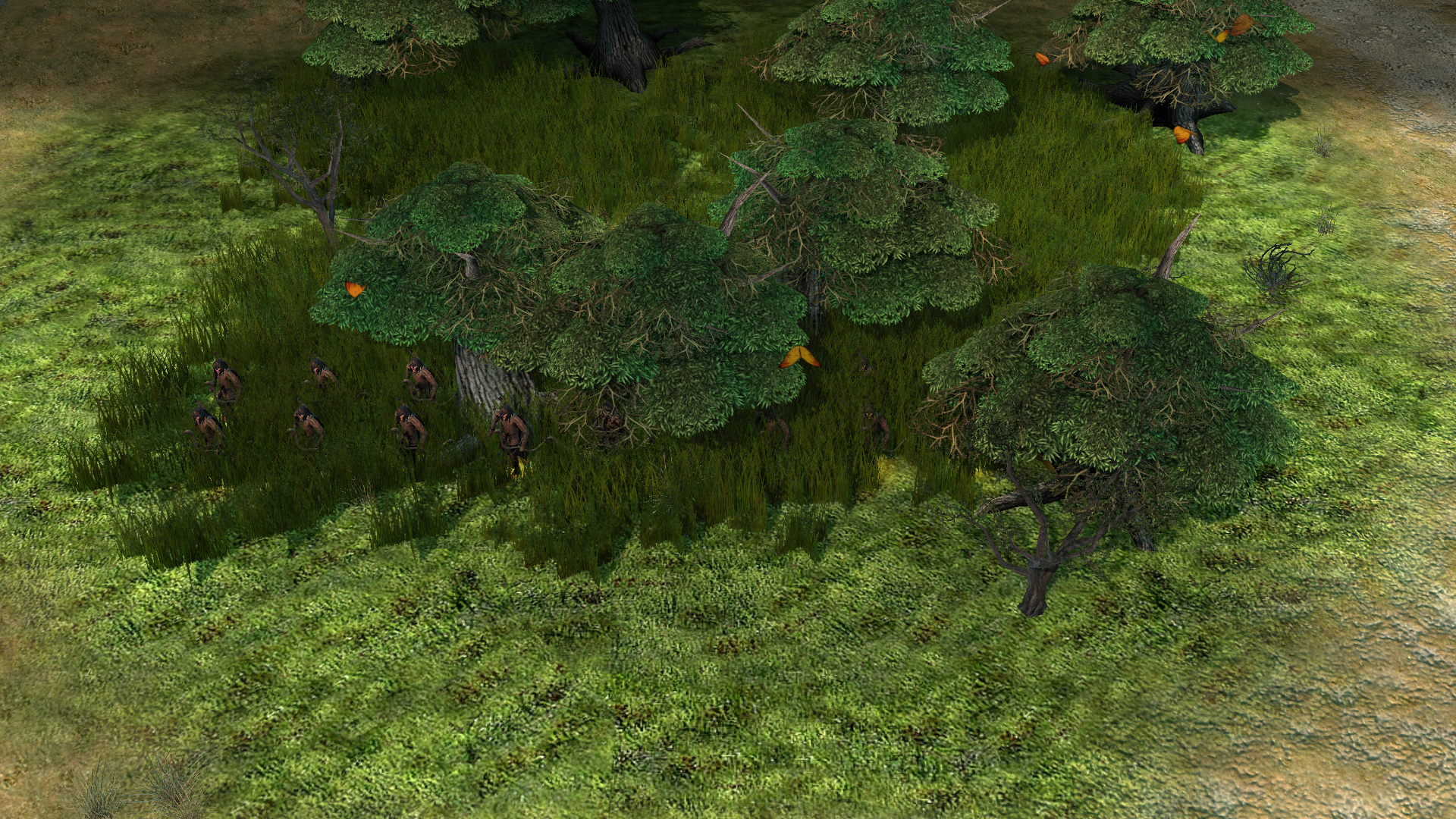 Bosmer can fid a wood even in the middle of desert

The Bent Dance
As you know, the Khajiit childbearing cycle is associated with the phases of the moons shining in the sky of the planet Nirn. The Bent Dance is a magical curse that the Khajiit born under the so-called Dark Moon, or more simply, during an eclipse are subject to. Some of them begin to hear the beckoning sound, the beating of Lorkhaj's Dark Heart. If Khajiit yields to the call of this sound, his soul will be captured by Oblivion, and he himself will turn into a dangerous dark spirit, the Dro-m'Athra Reaper.

“The Bent Dance” ability summons four aggressive spirits to the battlefield, the Reapers of Dro-m'Athra. Their attacks deal splash damage and also restore their own health, similar to the ghosts from the original Battle for Middle-earth II. 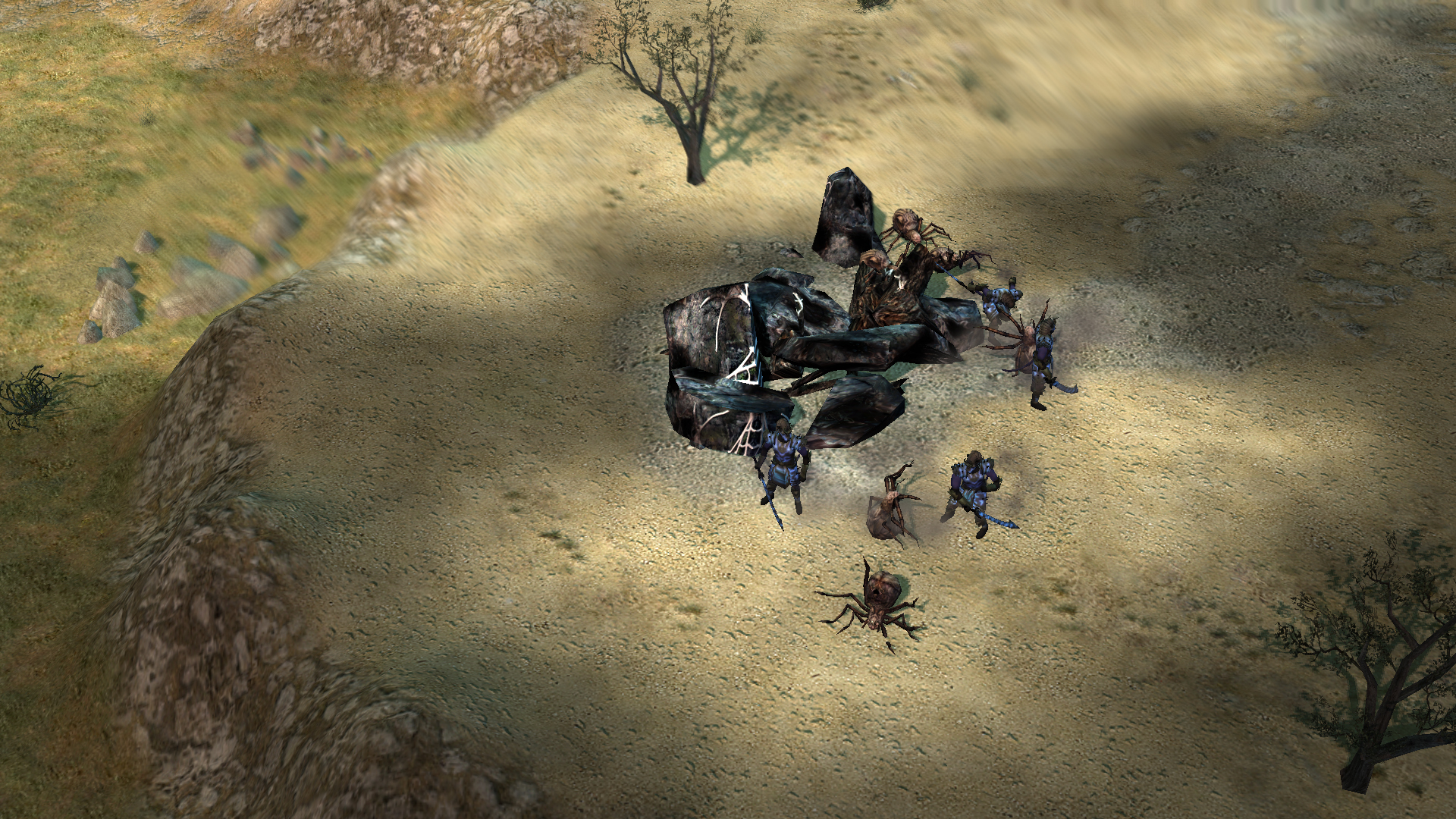 Alinor’s Radiance
Travelers who visited the capital of the Summerset Isles, Alinor, said that the shining white-stone city with high towers and bright stained-glass windows, over which the sun never sets, made a mesmerizing impression on them. All who first saw the glitter of the Altmeri capital fell into a stupor and amazement and told their less fortunate comrades a variety of unprecedented stories about it.

Conspiracy of Thalmor
Thalmor Justiciars are well aware that wars are won not only with swords, but also with the right words. The nemesis can easily become an ally, and the Justiciars are trained to use words that would probably convince even the Daedric Prince to fight on the side of the Dominion. Therefore, never be surprised if even the seemingly implacable enemy of the High Elves stabs his comrades in the back with a shout of "Fear the Thalmor!".

The ability "Conspiracy of Thalmor" allows you to summon a Justiciar on the battlefield, who temporarily converts selected enemy troops to your side. Keep in mind that this Justiciar looks similar to his recruitable analogs and could be easily disguised. 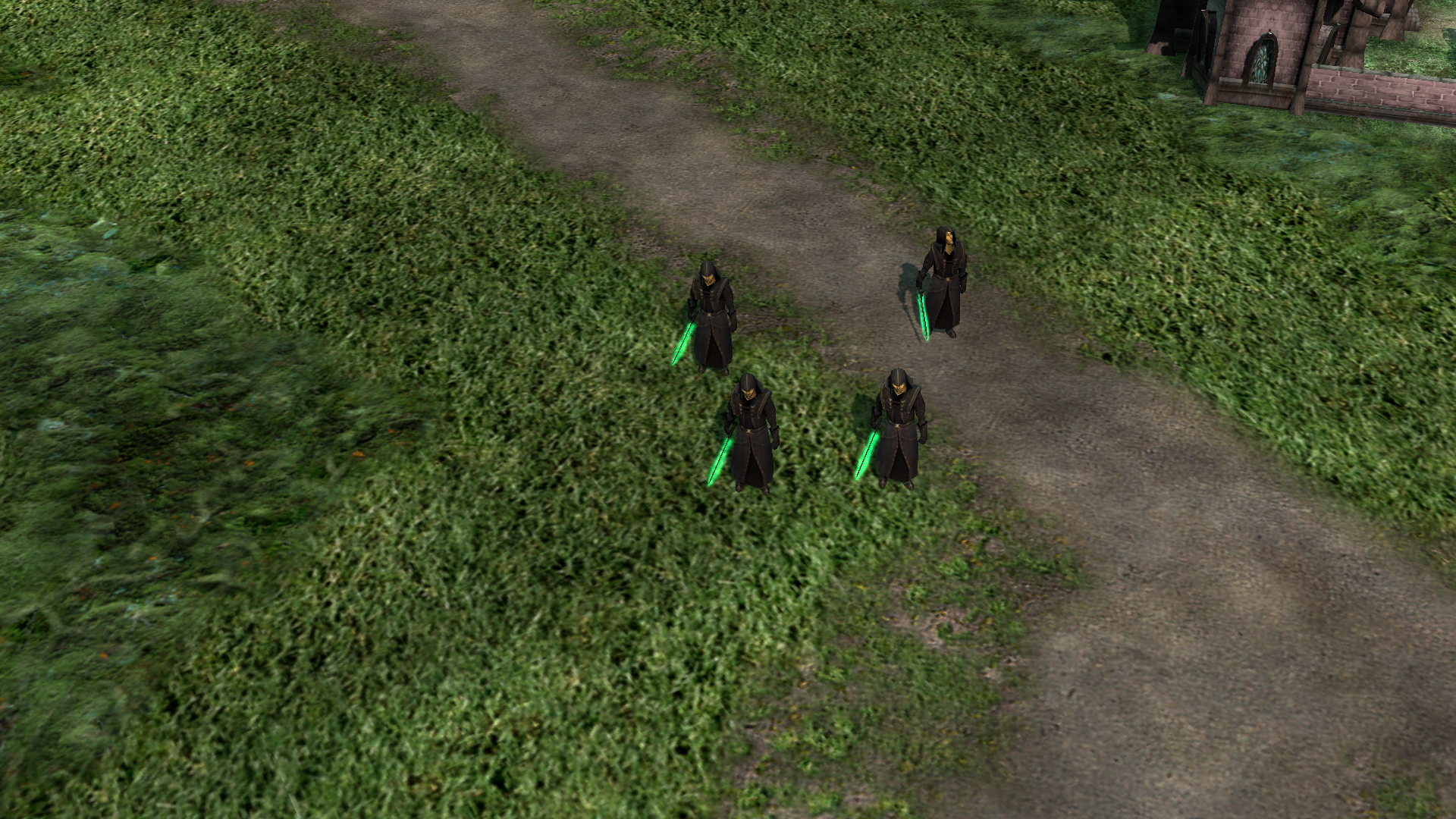 Only three Thalmor Justiciar's could be recruited from Thalmor Headquarters. It means where is one impostor among us!

Wild Hunt
Hircine, Daedric Prince of the Hunt, one of the most important deities of Bosmer pantheon. The forest people treat this god ambiguously: some see him as an antagonist to their main god Y'ffre, who wants to return the world to the original state of eternal chaos, others offer him prayers as the patron saint of hunters, because hunting is the main way of obtaining food for the Bosmer. Hircine is best known in Tamriel as leader of the Wild Hunt, a Daedric army that occasionally appears in the mortal world to hunt those unfortunates who, through their negligence, incurred the wrath of King of the Hunt. Mortals can also join the ranks of hunters, and after the foundation of First Dominion, many Bosmer, who did not want an alliance with the Altmer and Khajiit, sided with Hircine and became his Hounds. 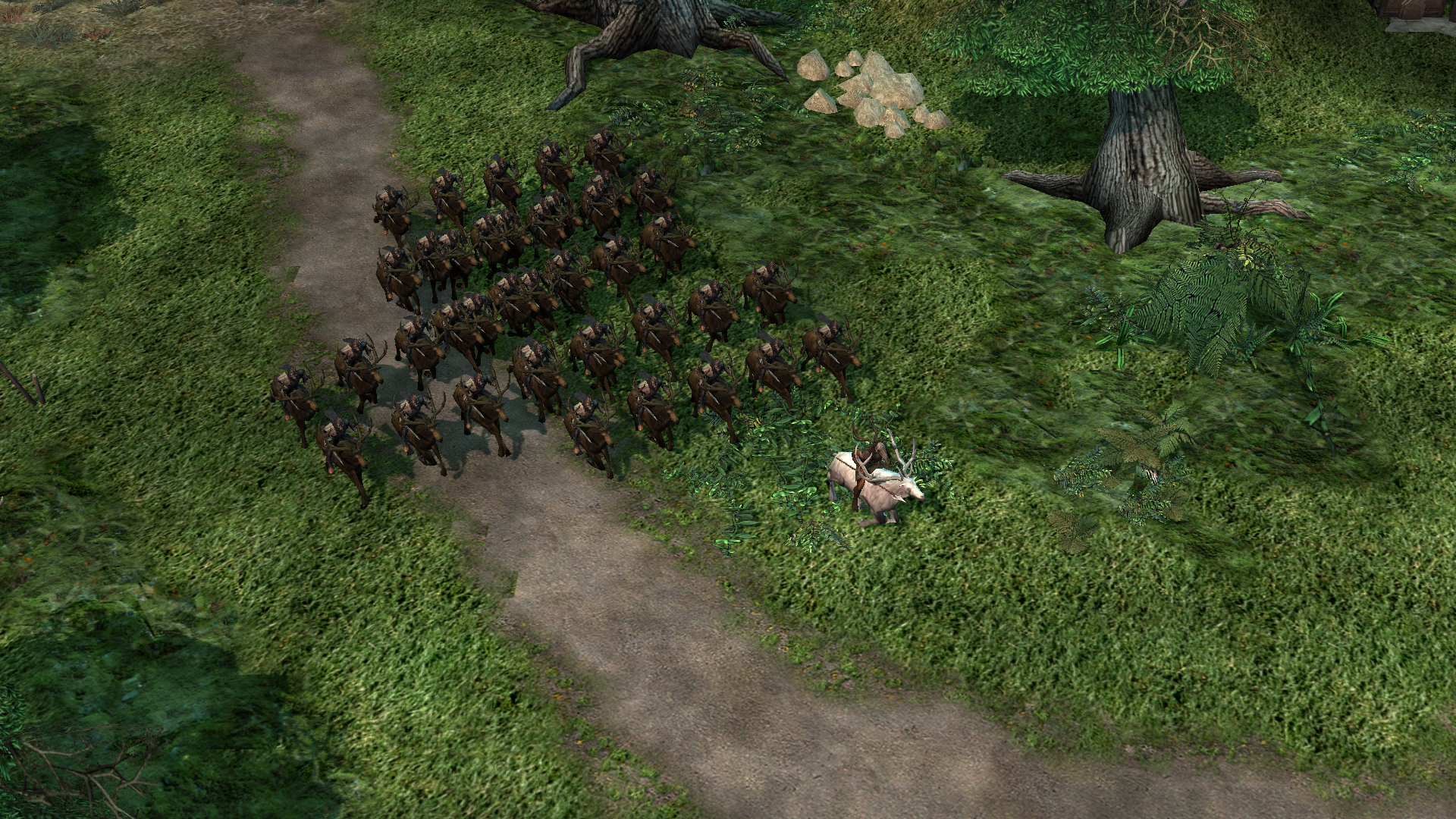 The “Wild Hunt” ability summons an army of ghostly riders who can switch between sword and bow in combat. The Hunt is headed by Daedric Prince Hircine, whose arsenal, in addition to devastating attacks, also has three abilities: "The Hare", which allows you to freeze an enemy hero and reduce his Armor by 50%, "Spear of Bitter Mercy", which scatters opponents in its path and is able to kill even the most powerful enemy hero and "Storihbeg", which calls on the Hircine's magic wolf pack, knocking back enemy units on its way and causing decent damage to enemy buildings.

Crystal-Like-Law
The Crystal Tower is an ancient structure that sits in the heart of Summerset and dominates the city of Cloudrest. This place is the sanctum sanctorum of the Sapiarchs, who protect the tower from any outside encroachment. It is said that this tower is one of the pillars of the universe, guarding the integrity of the time stream.

The “Crystal-Like-Law” ability allows you to summon the illusion of Crystal Tower onto the battlefield. When it appears, the structure scatters enemies around it and deals significant damage to them. The Crystal Tower is summoned until it is destroyed by the enemy. From this tower, one of two powerful elven kings can be summoned: Orgnum, the immortal king of the sea elves of Pyandonea, and Umaril the Unfeathered, demigod and leader of the Ayleid people who once inhabited Cyrodiil. It is impossible to summon both at the same time. 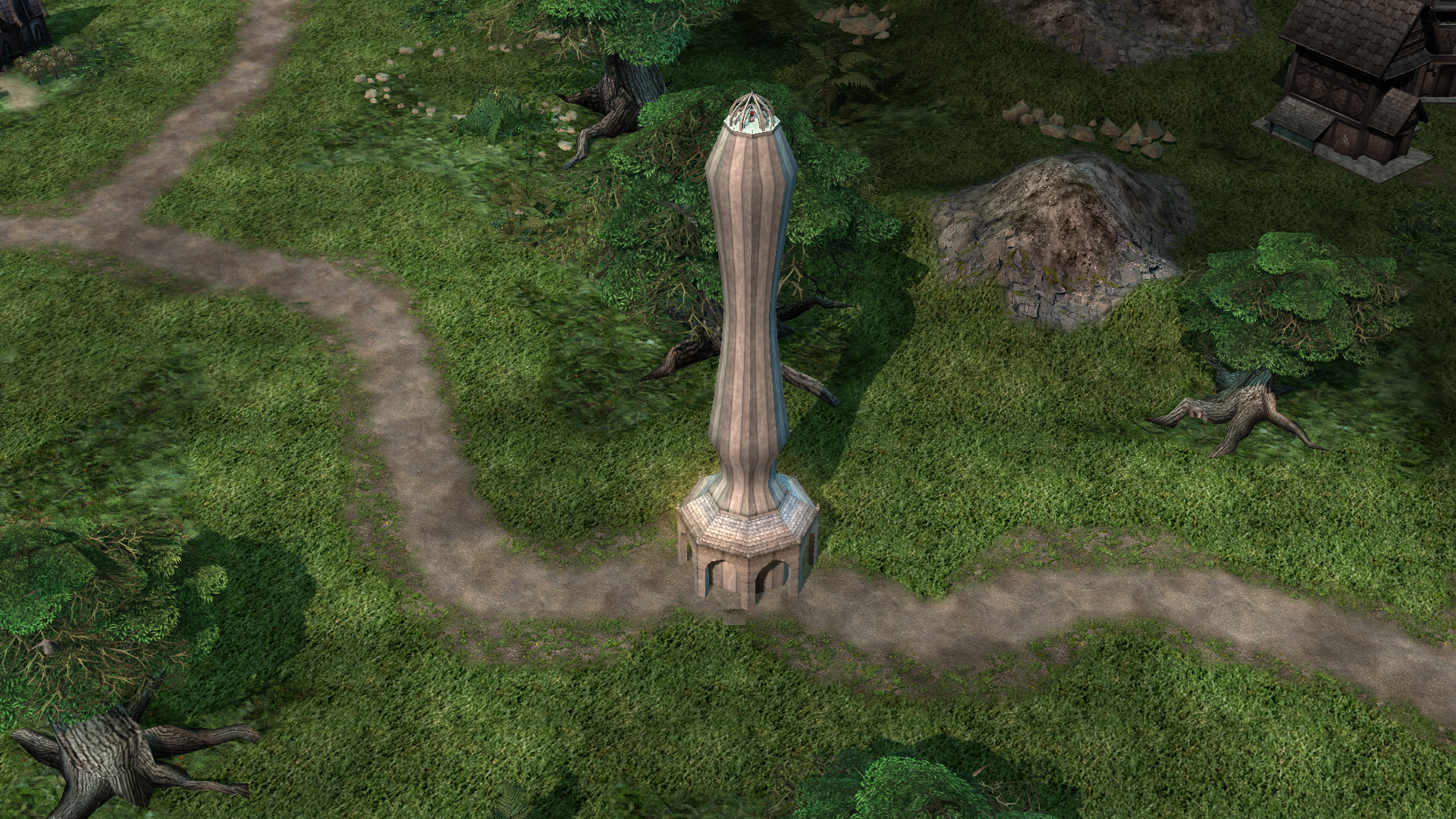 Umaril is a warrior mage. His abilities are:

- Gift of Meridia: several tall warriors in golden armor temporarily come to the aid of Umaril, inflicting huge damage on the enemy

- Unfeathered Dread: Umaril jumps towards an enemy army, inflicting heavy damage upon landing and scattering them

- Magic of the Ayleids: Like all Ayleids, Umaril is known for his passion for the Element of Lightning. This attack inflicts devastating lightning damage on the target unit and sets enemies on fire. 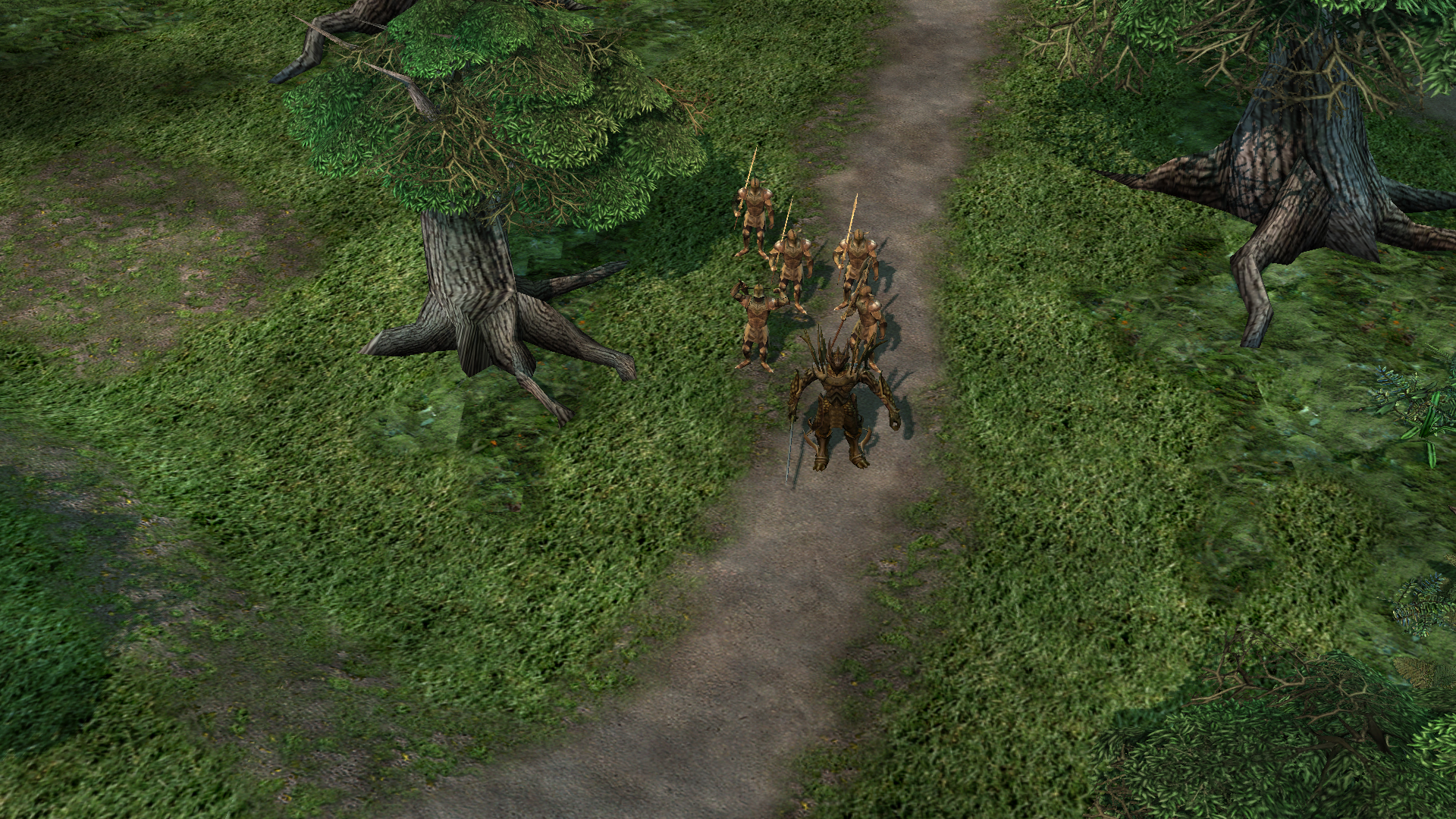 Umaril the Unfeathered and his fellow Auroreans. Do you still believe that good Daedric Princes exists?

King Orgnum has the following set of abilities:

- Mist of Pyandonea: Covers the selected area with a thick fog, driving all enemies in it into terror and hiding allied troops and buildings

- Storm of Pyandonea: Orgnum summons a wave of troops and buildings in its path

- Cloak of the Storm: A stormy whirlwind surrounds the Maormer King, allowing him to cut through enemy lines like a knife through butter. 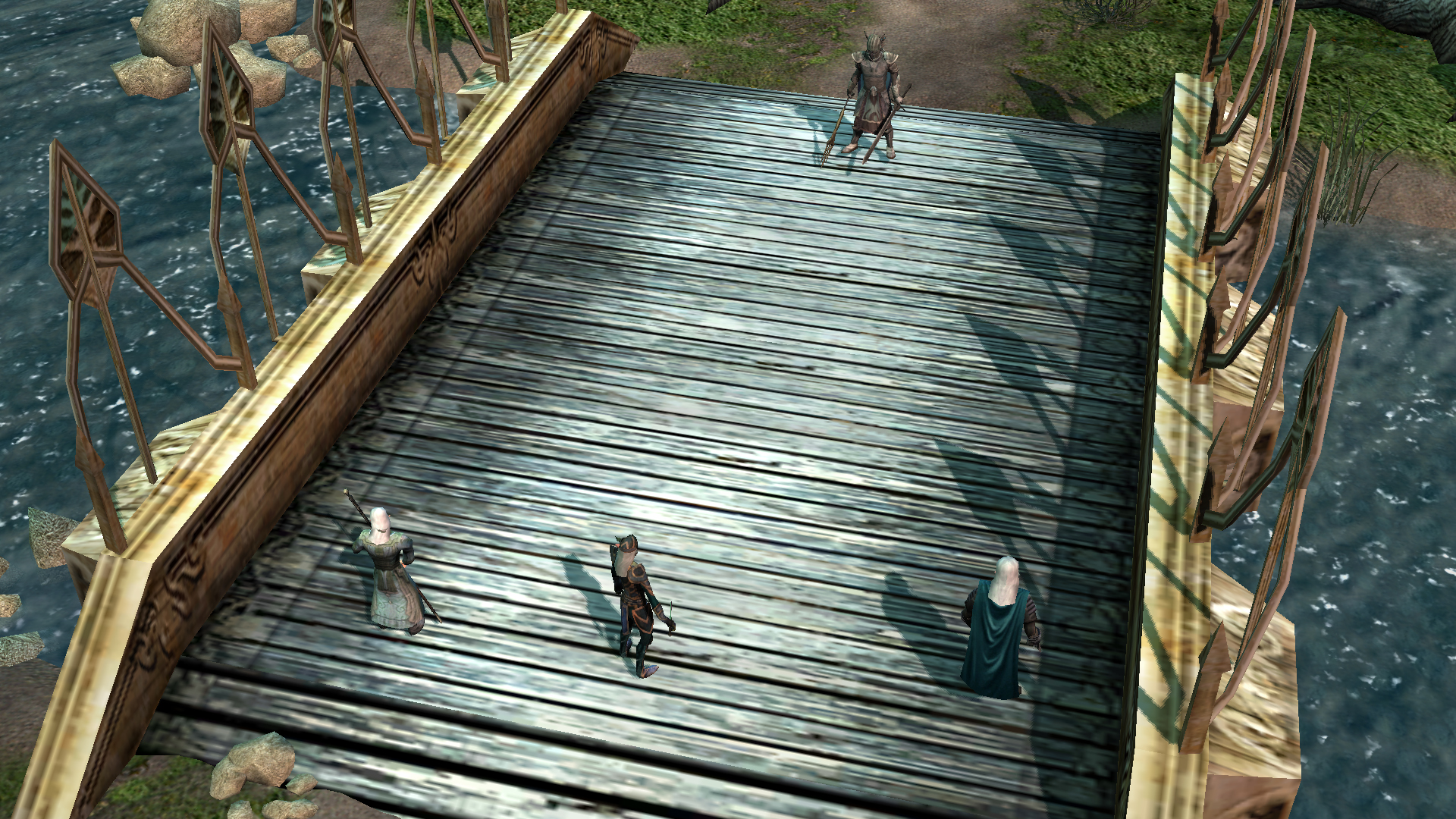 The real king Orgnum would kill all these mighty Altmer before they even blink the eye. They should thank the Gods that his illusion is more friendly to their kind