It's only been 3 weeks, but I have worked like a mad man on this mod (thank you COVID?) and bring to you the RTR6 integration! In it you will find up to 136 skins (new units and upgrades) the RTR6 soundtrack, new diplomatic situation, better recruitment, better battle performance and new battle_ai! Oh, and I finally redid the Spartans for you all. Enjoy!

Well, I must say that these have been some crazy times on our planet. Everyone is home, in isolation and we have no idea what will happen in the future. Trying times for sure. Thankfully for all of you that follow this, that means I have more time to focus on the mod. Yes, until things get better here in our world, I will be treating this as a job of sorts (to keep me sane) and I hope to really speed up the progression during this free time. 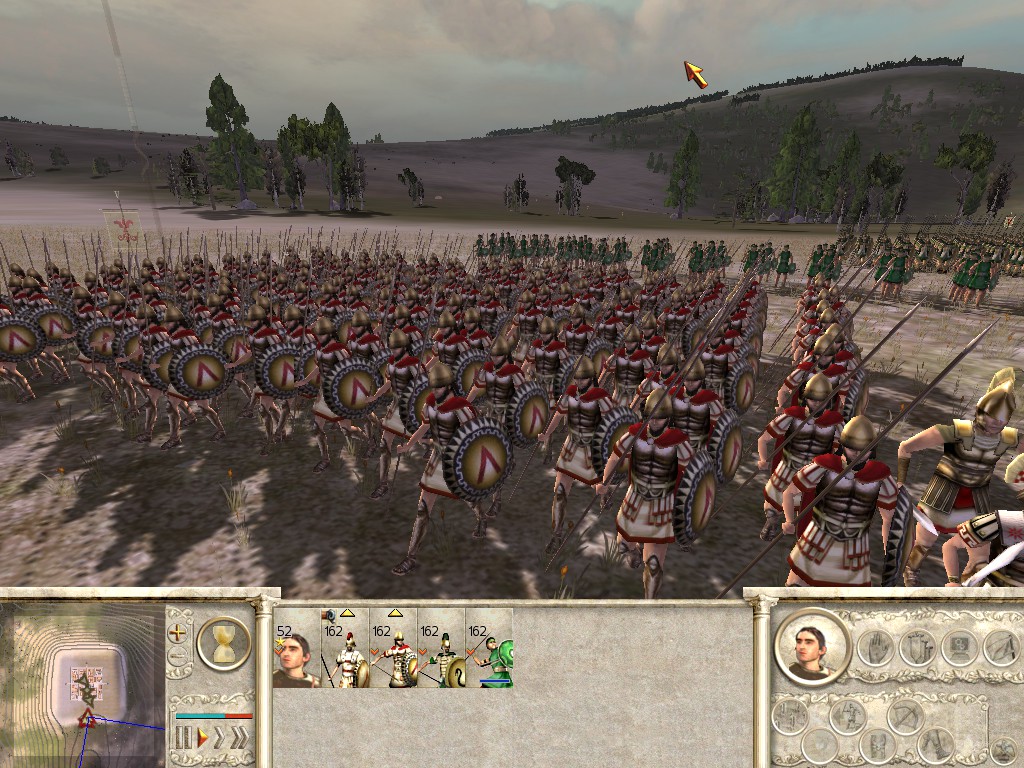 Spartans... I saw the requests, and I came through. I hope you like them!

Now, onto v17! This has been one of the most exciting, yet one of the most tedious and frustrating versions to work on. In this version, you'll find that I have integrated RTR 6 into the fold. RTR6 came out in the summer of 2005 (not even a year after RTW released!) and it offered the player a brand new game almost. Complete new unit rosters, two new factions, realistic looking units, a new soundtrack and longer battles. It went down as a classic, being one of the most memorable mods out there. Since then it has taken a back seat but it's still a gem. I have included just about everything unique about it into v17, adapted to fit the style of this mod. This means a ton of work reskinning and coding in units was done. This also means that recruitment needed to be revised. On top of that the RTR6 soundtrack from Vlad Kuryluk is included as well as Sinuhet's 7.0 battle ai formations. I have also fixed some bugs and balanced out the battles a bit. This will be a lengthy article so buckle up and enjoy!

First we will get the main event out of the way.. the units! A few factions weren't really touched due to them either not being in RTR6 or RTR6 giving them generic rosters that didn't add anything special. Other factions on the other hand will get a complete overhaul, even if just in appearance!

Carthage got a few new units and a few new reskins. The main things are the new elephants.. they have a better 'African' look and they lose their huge Cataphract elephant and have the War Elephant replaced with a smaller version. This is more accurate, and still lethal! They also have a better cavalry representation. With this being said, Carthage now has two areas of recruitment: Africa and Iberia. Basically, you won't get Iberian troops in Africa and vice versa. Finally, the starting units have been changed to make it more accurate for Carthage as well as making them more of a force in Sicily. 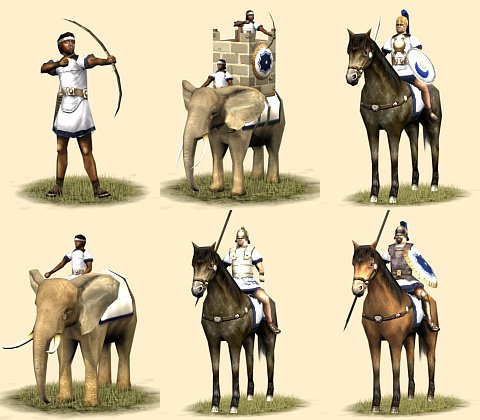 Staying in the same area, Numidia got a brand new look to their skins. They now look Numidian instead of Iberian. They also gain the Cataphract Tower Elephant which should serve them well in the long run. 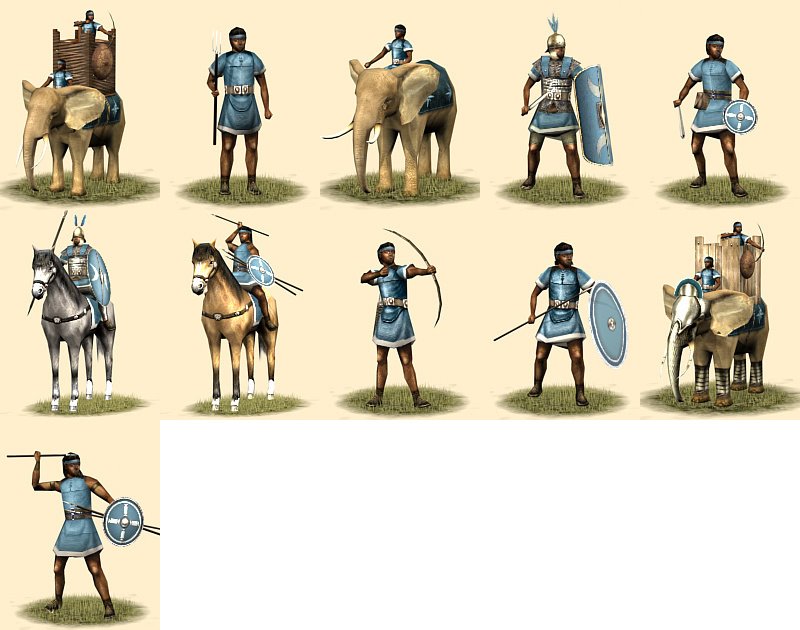 Moving north across the Strait of Gibralter, the Iberians have had a bit of a boost. They gain a few new units, two noteworthy ones being the Edetani Devotio and Lancers. These are two Elite units only available in Arse. They receive a Heavier Skirmisher as well.

The Gauls will get a new Heavy Spearmen unit, the Romans will get an elite cavalry unit in Extraordinarii Cavalry. Finally Thrace gets a Warband, and can only recruit Militia Hoplites in Greek regions now. 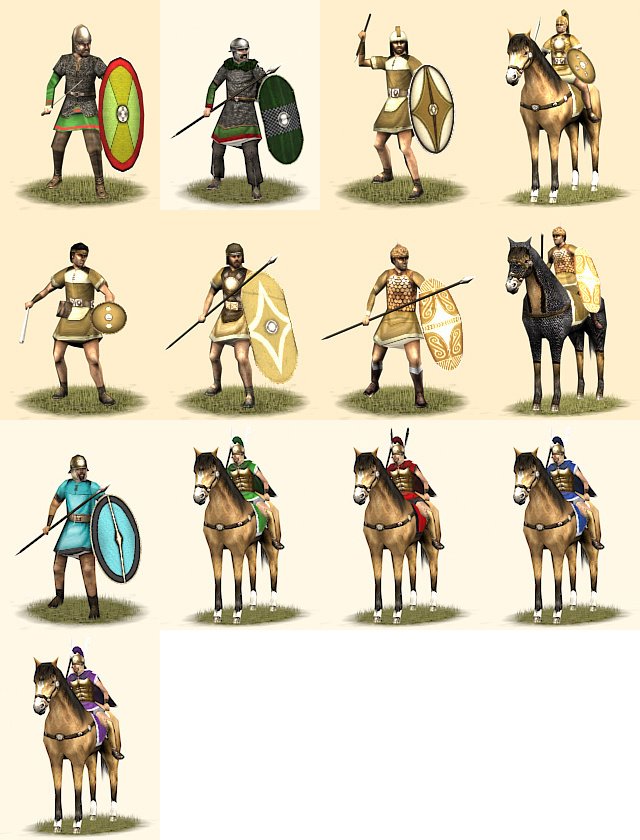 Further north are the Germans, and they will end up getting a major upgrade, including many AoR units that will represent some of the major Tribes. The Chatti, Batavi and Semnones are just some of the few tribes that you will see being represented. 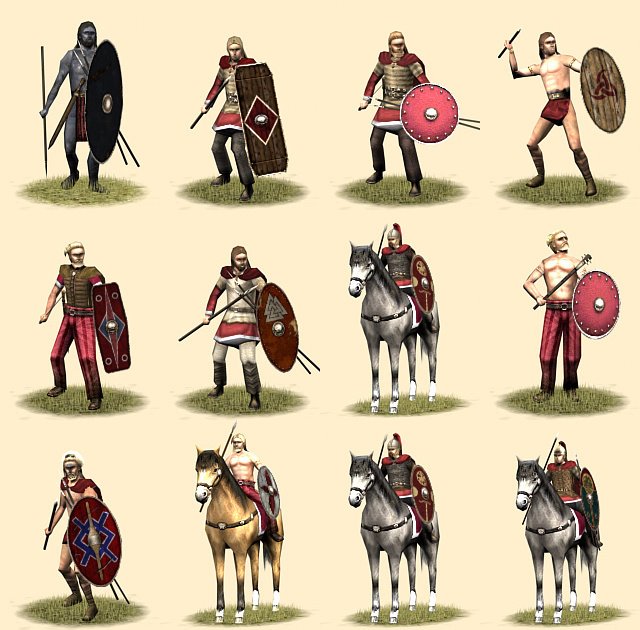 Now, going southeast, we encounter the Antigonids of Macedon and the Greek Cities. Both factions will get considerable upgrades. Macedon now has it's own line of phalangites as well as some awesome cavalry. The Greeks finally get their Spartan upgrade as well as a few other upgrades. 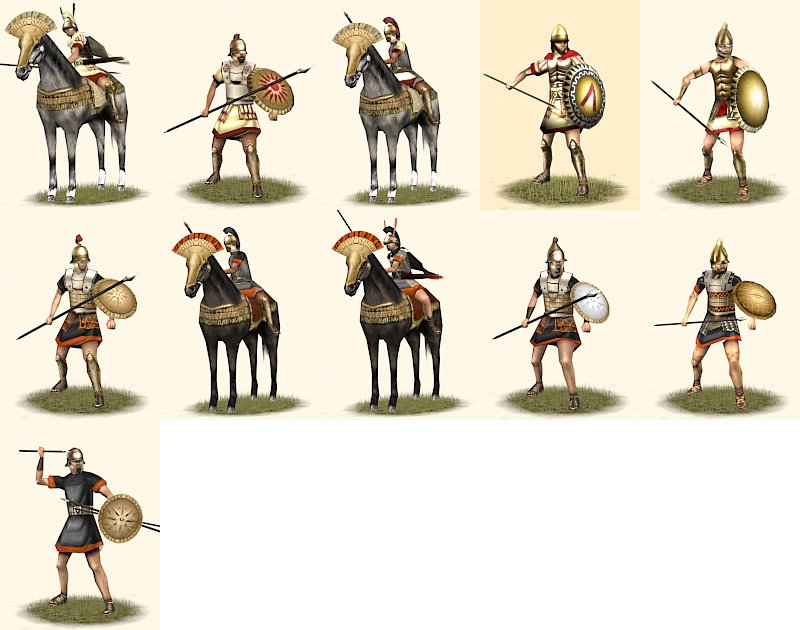 Staying in the Hellenistic realm, the Seleucids will receive one of the biggest updates. Not only are their Elephants amazing, but they also get a Phalangite line of their own, new cavalry and even new skirmishers and a camel unit! 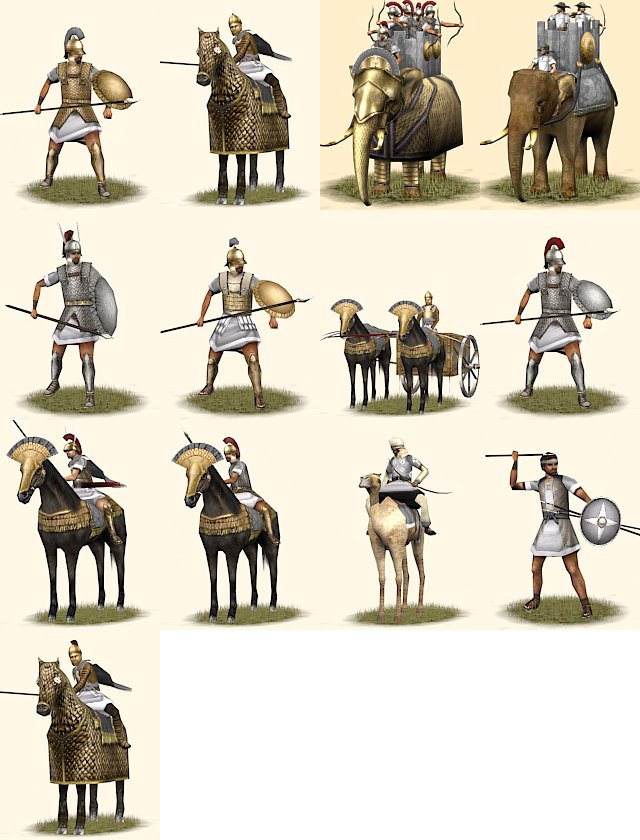 Finishing up the Diadochi is Egypt, and they finally have a truly unique roster now instead of a copy of Macedon. They get their own phalangite line, extensive Elephants, and some great cavalry! 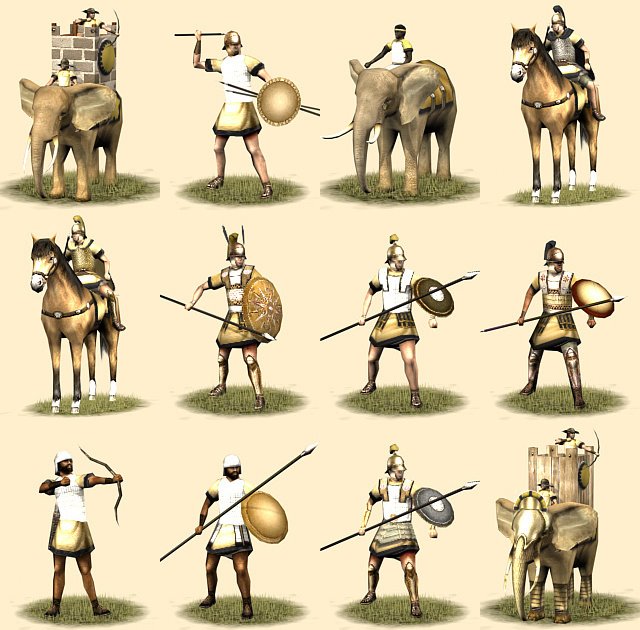 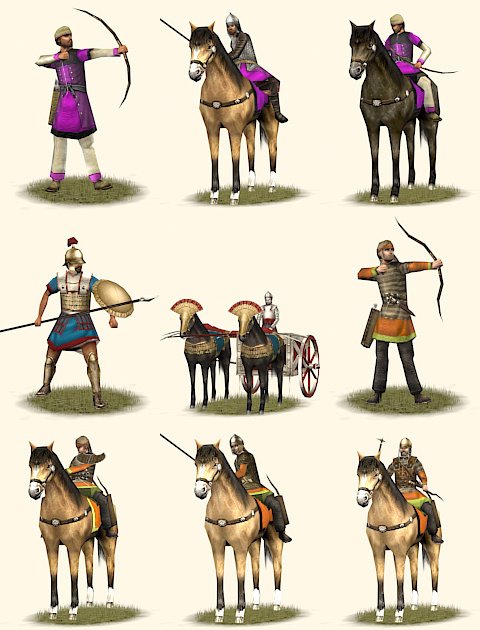 Now, the most immersive addition in my opinion are the mercenaries. There are a ton of mercenaries and they cover every part of the map. I won't list them out here but maybe you can guess who's who? 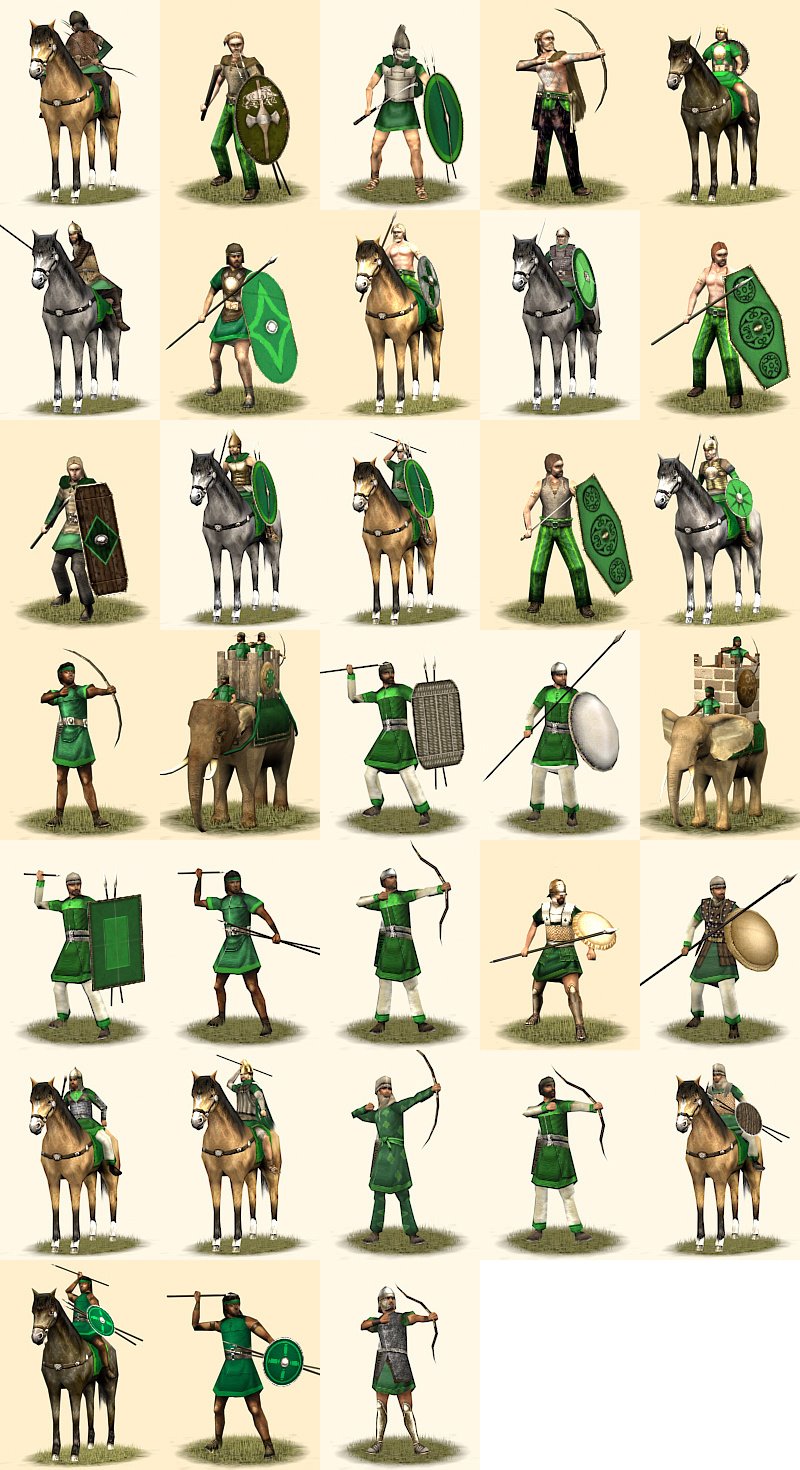 The many new mercenaries available for hire!

Finally, what would this game or mod be without the Rebels? I have included many rebel units, especially in the Balkans area to make it more interesting! 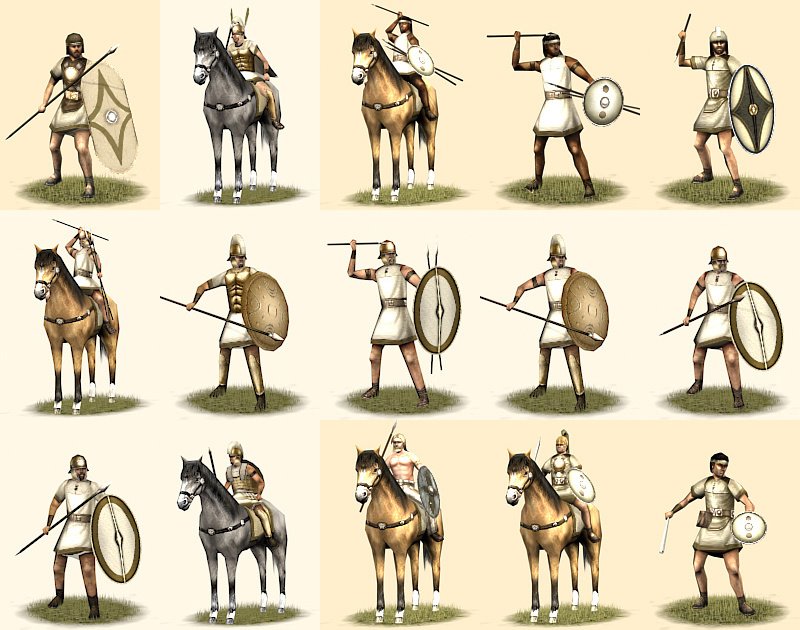 Now, moving on from the units, there are a few other things that I want to showcase. First is the music, composed by Vlad Kuryluk. This is one of my favorite soundtracks and it was for the RTR6 mod. I hope you all enjoy the new music!

Also, recruitment has been broken up again. Iberian, Balkan, Celtic, Germanic, Greek, Hellenistic, Roman, Eastern, Carthaginian, Numidian, and Nomad are the different recruitment centers now and so it should definitely offer a better sense of realism in that regard. Also, each faction has it's units spaced out better in the 5 tiers, so things won't seem so off balanced.

Thrace got a minor rework for it's culture. It now is predominantly Tribal and can build Taverns and Bardic Circles. However, they are a major WIP and they will be a fun faction to tackle.

Battles should also be a bit different. First, Roman infantry won't have the AP ability and massacre anything they face. Second, Greek and Eastern Psiloi won't be lethal against cavalry anymore. Third, cavalry won't have super long charge distances which means YES, they finally lower their spears when charging! Finally, I have yet again included a new formations file. This one is Sinuhet's AI formations 7.0 which was the one used by RTR for years, so hopefully it works well while the main file is being worked on.

Last but certainly not least, I have updated diplomacy and core attitudes. Some factions will start off as allies and some as enemies. Will this make a big difference in how the AI operates? I hope so! 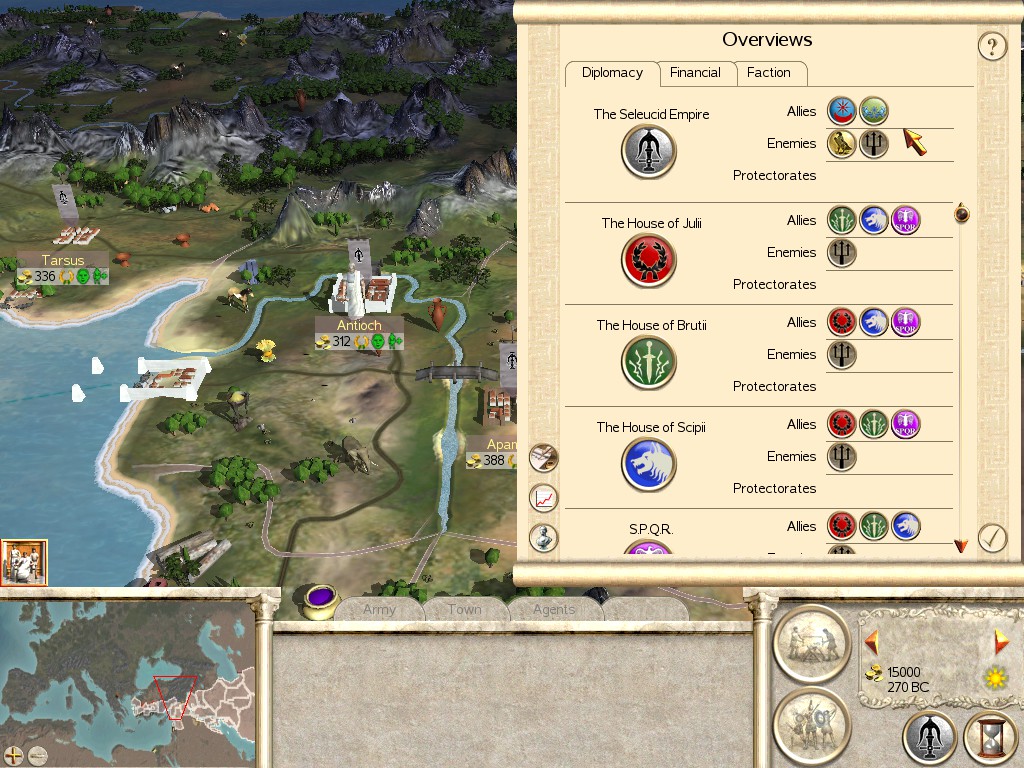 The Seleucids will have a more interesting Start

To finish this lengthy post off, I always would be highly appreciative of feedback from the game. Every time some posts about an error, bug or weird occurrence it helps this mod get better and better. So please don't hesitate to comment! Also, for this version I'd really like it if I could hear from you all on how your campaigns are going. It always excites me to read your stories and see your screen shots!

Before I get into the credits, just know that Historical Battles and Quick Battles HAVE NOT been updated to v17. This is because until my unit rosters are final, I don't want to have to commit to doing those battles time and time again. I hope you can understand, and just know that you can always create your own custom battles!

- The RTR 6 team lead by Caius, after taking it over from a scandalous Tyr.. Quite the story. Anyways, this mod is one of the best and mine wouldn't be possible if it wasn't for you guys, wherever you may be!

- webbird and warspite for many of the skins and details

- EB for their Spartan Hoplite Model

- Kaiser for his patience

- BHL for assisting in the Recruitment Centers

- Mausolos for his nagging.. I mean for his historical knowledge and wonderful descriptions! You are a great friend.

- jorellaf for his historical knowledge