While working/play testing the next version of DCG:AS, I played a very exciting mission that I wanted to share with everyone. With the new realism/unitpack and playing on hard difficulty, I had some intense firefights with the enemy infantry. The one of the fights lasted a good 5 minutes! If your good with micro-managing your guys: putting them in cover, telling them to heal, organizing flank attacks... etc. You'll can come out on top. It's simply awesome when everything comes together in DCG

I first contacted the enemy with a scout squad of two riflemen. I ran into roughly two enemy squads of eight soldiers in the middle of the town. I did not waste time trying to engage the enemy and immediately pulled them back to the edge of town, where my 1st and 2nd squad were waiting. 1st Squad was a standard British rifle team, armed with 6 Enfields, 1 Thompson, and a Bren LMG. 2nd Squad was a similar Rifle Section with a anti-tank grenade launcher instead of LMG. With my scouts having regrouped with the rest of my forces, I waited behind cover for the enemy to send there forces in-search of my men.

As I kept my men on hold fire an enemy squad appeared weapons in hand, on alert searching for the recon team. I ordered my men to go prone, allowing the enemy to come closer without detecting our location. I positioned my scout team on the far right and in front of the wall that my main force was hiding behind. This allowed them to watch the enemy approach. The enemy squad slowly creep-ed up and was within 25m when I ordered my whole force to jump up and open fire on them. Grenades began exploding, bullets flying, and men screaming. It was over for most of them in a flash. Within seconds 6 enemy soldiers were dead while the remaining two managed to jump behind cover. They were pinned between a wall, barbwire and tank traps, with no were to go but out into the open. I wanted to finish them off quickly before any reinforcements arrived. I ordered 2nd Squad to run to their left flank behind a short wall, while 1st Squad with the LMG kept the stragglers pinned. 2nd Squad quickly finished off the remaining two soldiers. 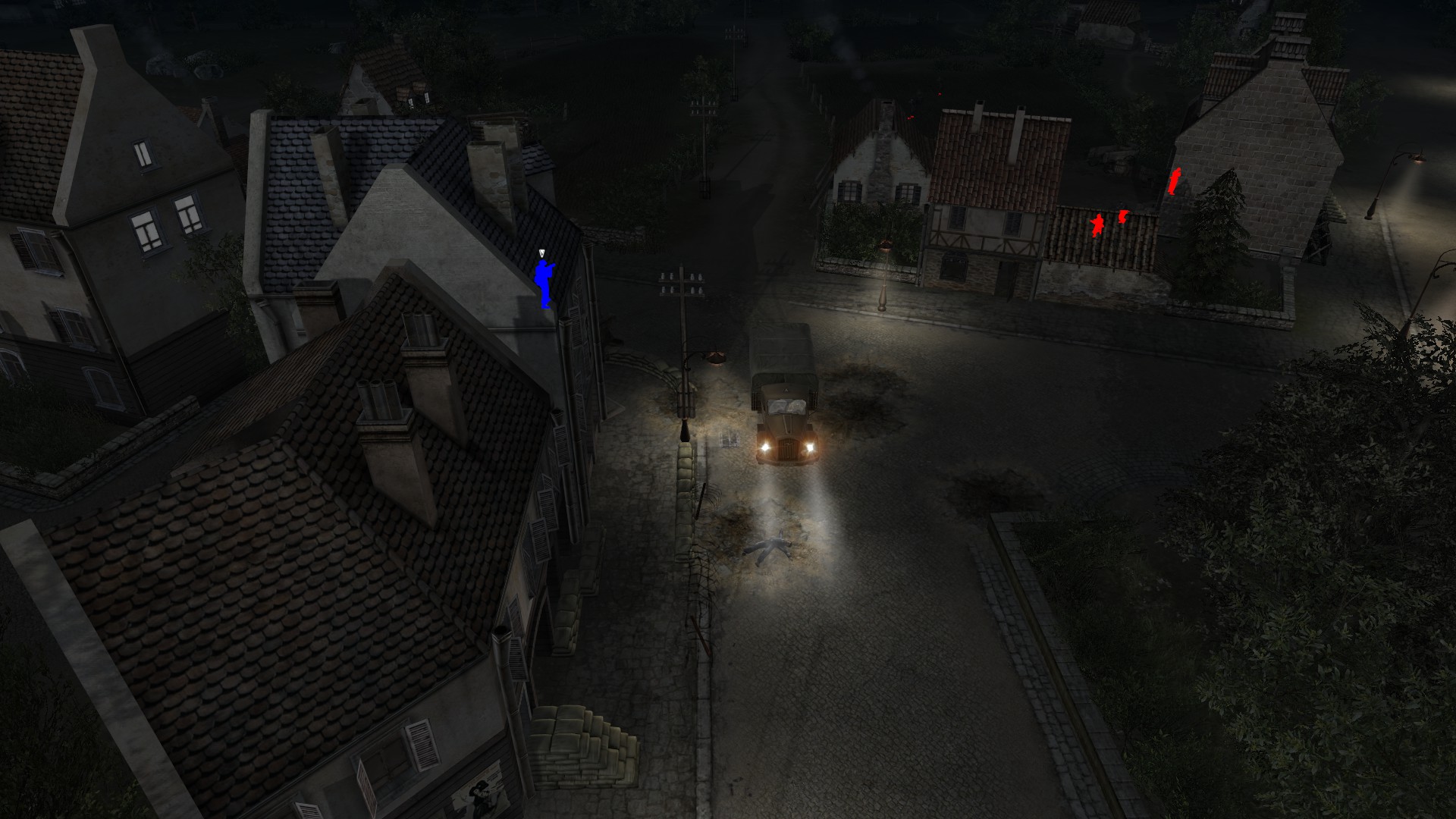 After waiting a few minutes with no German reinforcements in sight, it was time to scout the town again. This time the scout team managed to push all the way up to the objective, a truck which appeared to be unguarded. With one providing over watch from a second story window, I rushed the other soldier in to steal the truck. As soon as he cranked the engine, enemy soldiers begin appearing through the fog, firing with their rifles at the driver. The truck accelerating as fast as it could, pulled up to the building that over-watch soldier was in and he quickly jump in the truck with the enemy still raining bullets at them. The instant the truck began moving again German mortars rounds began falling in the streets. Exploding left and right, the Opel truck raced to escape. With a few close calls, the truck rounded a corner loosing the infantry behind the buildings. I had escaped.

After again rejoining the rest of my forces, I placed 1st Squad inside the truck and had 2nd Squad provide escort/recon as we moved to the final objective. We moved along the far edge of the map, avoiding the town and hopefully the remaining forces. Little did I know that the Germans had spotted my troop movements and surprise attacked my right flank en route to the objective. I had my escorting squad drop to the ground and provide cover fire, while the truck pushed forward to a low brick wall and unloaded 1st Squad into cover. Mean while, 2nd Squad was stuck in the field and pinned down. I ordered them to hold fire and crawled to cover while 1st Squad engaged the enemy infantry from the wall. 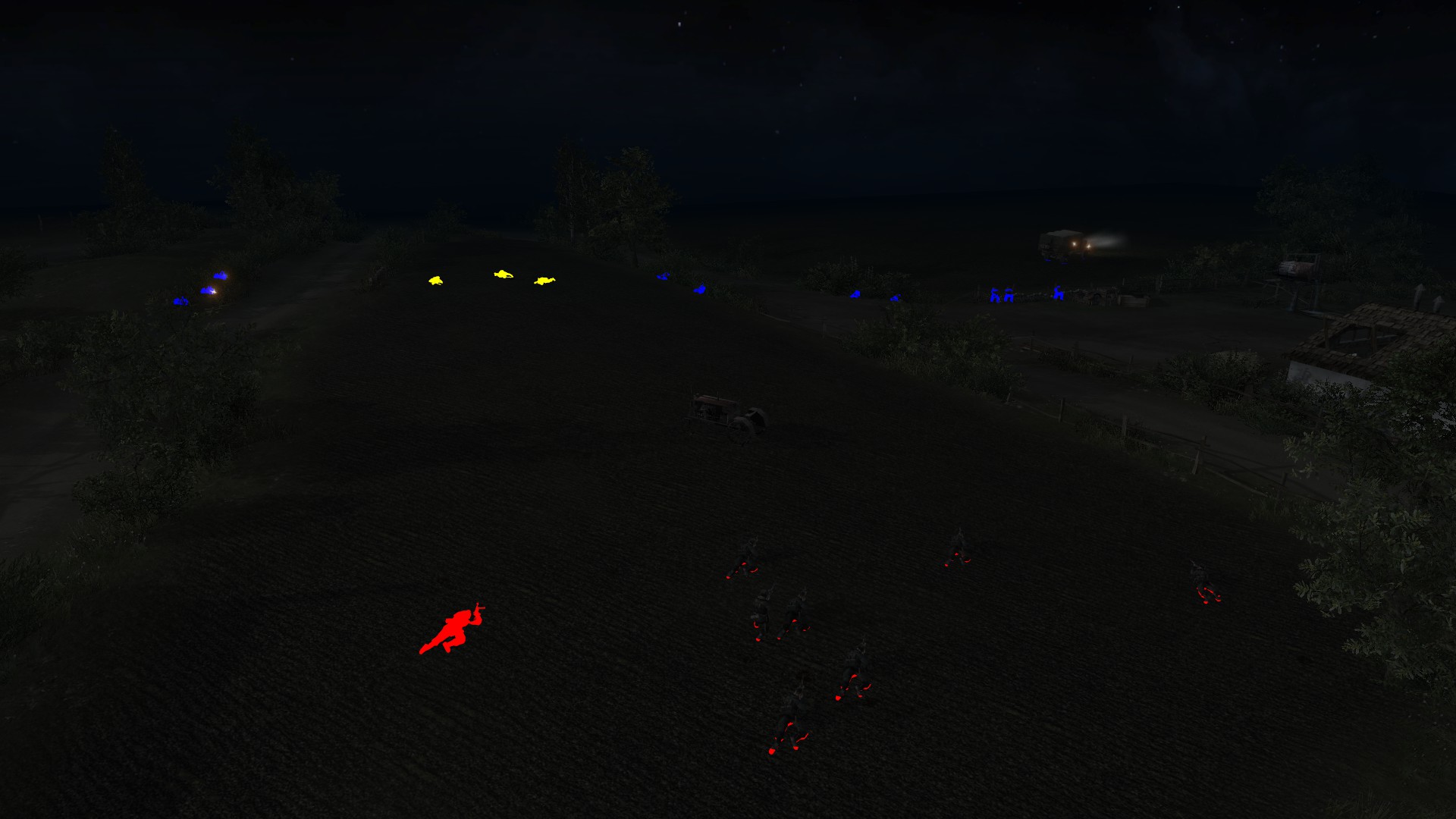 By now I was able to see I was fighting 2 full squads, one with skilled MG34 gunner that was doing some real damage. They managed to kill two of my riflemen in 2nd Squad before they could reach concealment. After a minute of fighting, my forces were not in good shape. 2nd Squad was spread out in the open trying to find good cover. They were hurt, suppressed and had lost 2 men. 1st Squad, had not lost anyone yet, but their health was starting to run low, and they were being suppressed behind the low wall.

Realizing that the situation could turn very bad quickly, I ordered my 1st Squad's Squad Leader and 2 rifleman from behind the wall to the far left flank behind a few buildings for cover. I found a few crates that had perfect flanking position on the enemy who was starting to push up on my other forces. Ordering the small flanking squad to move in behind the crates, they reached the position without being noticed by the enemy. My three men opened fire and quickly killed 3 Germans before they had time to react. The enemy refocused their fire on my flanking attack, allowing my other squads to recover from suppression and heal. 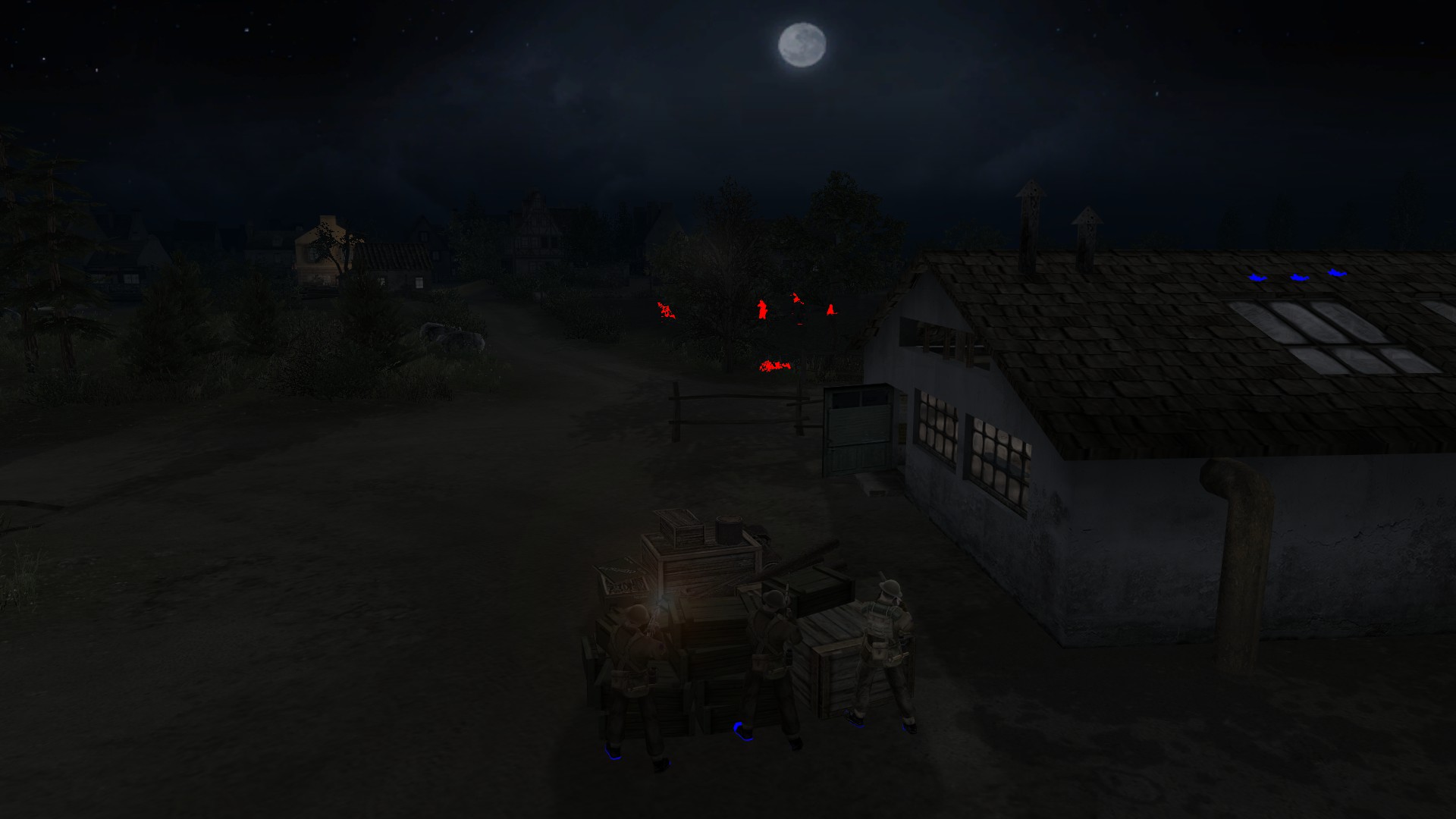 Having accomplished their mission, I ordered my flanking squad back and with renewed strength, my forces were able to suppress and drive back the enemy attack. Two enemy soldiers managed to flee before I could finish them off but after a 5 minute firefight, I had killed 14 enemy soldiers and lost 3 riflemen. If it wasn't for the well timed flank maneuver that turned the tide of the battle, it might have been a fight to my last man.

With the last skirmish over, there wasn't enough enemy forces left to stop me from reaching the objective. I hope this truck is worth the lives of 3 of my men.

I also posted this in a DCG:AS Steam Group. You can see it here..

Sounds nice the way you describe it but I always felt that large scale battles and flanking maneuvers & intelligent attacks of the ai were missing. Looking forward to test out your next release regarding those minor critic points.

Awesome battlreport! You have nice immersion in how to retell the story...

I allways hated the install of DCG...but havent tried the latest release...and I must say your mod is what MOW series could really be all about, it misses a campaign feature..This is the best mod for Mow,Mowas alongside with Germansoldiers mod.

Thanks, we are planning a release for Christmas. I'm wrapping up the Italian vehicles this week, then making final preparations for the release.

In 4.0 will you not get steamrolled by enemy tanks on your 2nd mission? After the first mission of a DCG campaign the enmy always has lots of tanks. (2-5 tanks usually)

The missions vary greatly. There are some operations (example would be playing as USSR in 1941) where the enemy AI will be aggressive and difficult to beat. That is just how it was in WWII and we strive to incorporate those details. DCG is designed for you to NOT win every mission. This isn't the skirmish missions where you have to win to go to the next one. Retreat is an option to save your forces from total destruction.