Christmass is comming, and to celebrate it in it's true spirit, we're going to give all of you modders out there a gift!

Don't hold your breath if you're waiting for some cool T-Shirts or some new games. Instead we decided to share some of the knowledge built while working on our AvP2 Team Fortress mod. The following articles will focus on something most mods would love to have: 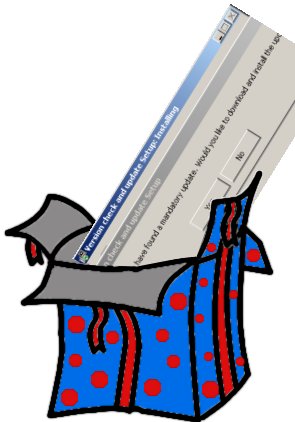 A mod launcher that also checks for updates!

You've heared it right, our gift to you consists in a tutorial on how to create your own mod launcher and update uitility! And to sweeten things even more, we're throwing in and an already usable utility. With just a few changes to an .ini file this component can launch UT, Quake and even Source based mods!

The last part of the tutorial (yes, there is more! Plus, we get to pimp out our mod for another day ...) will contain the actual finished product and it will be released shortly after this one, 4-5 days maximum. Meanwhile, here are the feature that the launcher has:

All the examples that will be listed below are based on just one program, called Nullsoft Scriptable Installer System. Go ahead and download it, and while waiting for the download to finish, read on.
Made by the very same people that also made WinAmp, NSIS is a tool that is intended to build installers. However, because of it's plug-in friendly architecture, NSIS aquired new capabilities, including an HTTP client and the possibility to launch external applications. Just what we need.

Now that your download has finished, install it. Sellect 'Full' as install option. 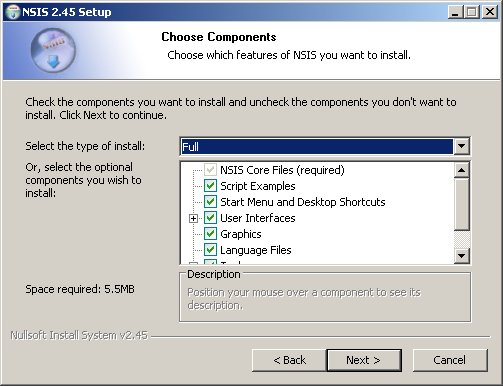 With the following examples we're hoping that you'll get yourself aquainted with how NSIS is being used. You'll also see bits of scripting that are then re-used in the final product.

Simple, browser-based, update
Without further ado, here's a very, very simple update mechanism. Granted that it just launches your default web browser to the URL of your latest patch, and it doesn't actually starts up the mod, the lesson here is that you can have the user reach the patch very, very easy:

# This example shows how to make a simple update utility.
# It will fire up the default browser on the client side,
# and open the URL for your mod's latest update
Name "Silent Update"
OutFile "Update.exe"
# another value is user, but stick with admin: most people install
# ther games in C:\Program Files, and you will need admin rights
# to perform the install there.
RequestExecutionLevel admin
# Uncomment the icon line to allow customization of the update icon
# This will require you to recompile the .NSI script
# Icon "Update.ico"
SilentInstall silent
Section
AllowSkipFiles off
#open the URL; here's an example for AvP2 Team Fortress
ExecShell "open" "http://avp2fortress.lithfaq.com/update.php"
SectionEnd

Save the text above as "simple_update.nsi", right click on it and select to compile it: 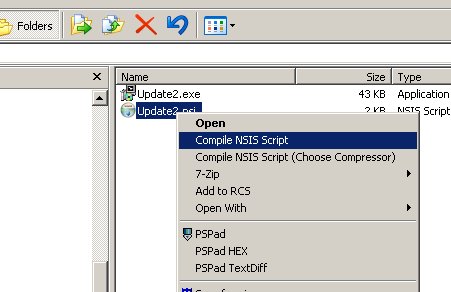 You'll then get a small .exe; in the picture above I used a different name, but yours should be named exactly as stated in the .nsi file, "Update.exe". And now, the magic part: double click the exe.

This is the actual mechanism used by AvP2 Team Fortress. We settled for this one because the Master Server Patch (aka Project Savior) for AvP2 has a version detection mechanism incorporated. We only needed a simple yet effective update mechanism.

A stand-alone update mechanism
This one uses the HTTP client that I mentioned a couple of sections ago. It comes in the shape of the "NSISdl::download" plugin. The usage is straight forward:


You'll notice that we didn't set out a path for the local file. In our case, the .zip file gets downloaded to the same folder as the update executable.

There's a reason why I wanted to show the renaming capability: instead of .zip files, you can download self extracting archives, or even better, installers. In this case, the last command (ExecShell) launches the installer, providing a seamless installation of the update.

Because of the seamless transition this is what the launcher&update component will use as update mechanism.

A bit about launching other applications

If the second update example didn't tip you off, here's how you can launch an external application.


This concludes the first article. In the following days we'll go even deeper, and we'll build a launcher&update utility that will give you, the modder, a reliable way to launch and patch up your mod. Stay tuned!