Here is part two of of my article series exsplaining what tools im using to create Battle of the Atlantic. This second part will focus on the Extentions ive bought from the Asset store and added to Unity.

Here is part two of of my article series exsplaining what tools im using to create Battle of the Atlantic. This second part will focus on the Extentions ive bought from the Asset store and added to Unity. Part one can be found here - Moddb.com


Uscript is a visual programming and scripting tool for Unity and is the single best purchase I have made all year. I would never have got as far with this project as I have done without this bit of kit. Looking through my options when I was struggling with programming 6 months ago, I got drawn to Uscript several times before finally taking the plunge with it. I'm pretty sure the Interface helped my decision, which apparently is based on an editor from the Unreal Engine.

Uscript uses flow graphs and nodes which, when saved are compiled into generated scripts for Unity to then use at Runtime. The great thing about Uscript is it uses Reflections to access every variable the Unity engine has to offer. So if you do happen to know what you are doing, you can do virtually anything with it and not have to write a single line of code.

Obviously documented nodes have already been made by the Detox teams for all the basic functions you would need and you can also make custom nodes which the Detox team is actively encouraging.

The only downside to Uscript, which is still a beta let's not forget, is certain performance hits in some situations, but the team have this as there number one priority to fix and just this week did release a new version which has two major performance related fixes(they generally release a major update once a month) and obviously some nodes that people may require may not be officially supported yet. But as said Uscript does give the ability to create your own and the people on the forum are always glad to help with such matters. The other down side is that you can't write shader files with it. But I believe it's something that is on the team's roadmap for the future.

All in all I can't fault UScript or the Dev team and community and would recommend it to both programmers and non-programmers a like. 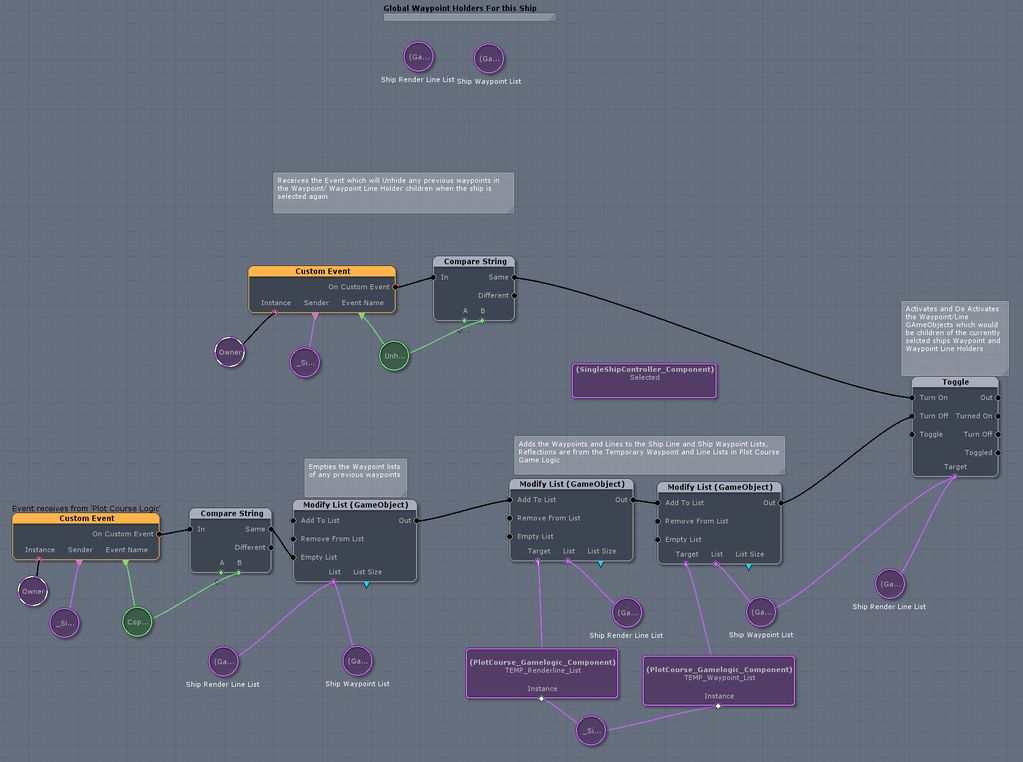 One of my Uscripts Graphs from Battle of the Atlantic

If your Thinking of trying Uscript or have it already....
......Might I point you in the direction of Maus (or HyenApp's) Necronodicon pack, which is FREE and adds another 170 documented nodes (and is continually being updated) to Uscript, including hashtables for the first time. This pack is now apprently available now in the Unity Asset store or the Uscript forums, so go grab yourselfs a copy!


As of writing Ngui is the top grossing asset on the Unity Asset Store and credit must be given to Aren Mook for getting there, a persom who is very similar to Ryan Clarke and Santiago Orgaz. His support for the product given the very small team he works with is exceptional and he responds extemily quickly to problems on the forum.

That being said, I tried the Ngui Evaluation version several times and just couldn't get on with it. I found myself going back to Unity's standard UI tools, before hitting a brick wall and going back to Ngui and so on. This happened several times and this was before we got into the programming elements! I also looked at alternatives like EzGUI and although that seems a like a very solid product, the reviews say it's just not as easy as Ngui, design wise or programmatically and being a non-programmer this was a killer for me, also with no ovious demo version I wasn't going to fork our a couple of hundred pounds for EzGUI.

There have been a couple of times when I thought about winding up the project, purely because I couldn't find a UI solution I felt comfortable with, and for a deep RTS strategy game this really is a show stopper....but also an idea that upset me a lot, Considering how much work and money I've already put into the project.

Afew weeks ago I turned back to Ngui after hitting yet another brick wall and this time stuck with it for a longer period of time. I then discovered the Holy Grail. Aren or Detox Studios or even both together had developed a script to make Ngui work seamlessly with Uscript...prayers answered!!
Since then I've been busy converting my Unity UIs into Ngui UIs and modifying the Uscript graphs to include the Ngui Event nodes.

I'm still finding Ngui frustrating at times and I think one of my biggest bug lists when I do get to release something will be the UI acting up at various resolutions as I'm not convinced I've got it quite set-up right. But So far, so good and I've not had to modify any of my main gameplay code to suit Ngui which is fantastic. 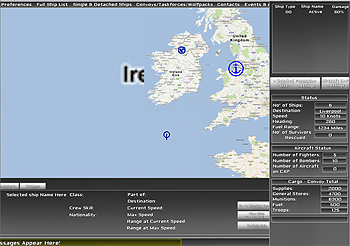 Abit of teaser here, the command map, built using Ngui. Those of you that know Ngui
will reconise I havent yet created an 'Atlas' to suit BotA and am just using the Ngui 'Scifi' Atlas
As a placeholder. The map is still from googlemaps....(yay!) and 2 of the 3 icons are
created in Ragespline(see next item)....need to convert the rest of the icons at some point!

I contacted Freakow Interactive to see if Ragespline would suit my needs, they sent me a linky to an older test version which I tried. My aim was to use Rage Spline to create the world map. Though it didn't unfortunately work out for that particular purpose I quickly saw other areas that Ragespline would be useful to me and the project. So I bought it to get the latest version.

It's an easy to use tool and I'm using it to create UI Map icons, which initially were 2d textures on a plane. Although efficient, these textures lost sharpness when the camera moved in and out and Z planing becomes an issue whereas with Ragespline everything is crisp and sharp at all distances.
The other thing that I can do with RageSpline is to draw oddly shaped collision boxes, as it can generate a collision mesh based on the line, if you then remove the line you can still have the collision mesh, so this I think is going to be very useful indeed.

All in all a fantastic easy to use tool, which by the way is seamlessly compatible with Uscript!


My first purchase from the Asset store which I bought to see how I could go about doing a dynamic plot course system on my main map screen. It kind of didn't help me too much but it is a pretty cool plug which you can use to add ai patrol and movement paths and well as moving things like platforms from place to place. Though I've now created my own dynamic Plot Course system for BotA , this will still potentially have a place in BotA. If I want little people walking around, like in Silent hunter for example!! 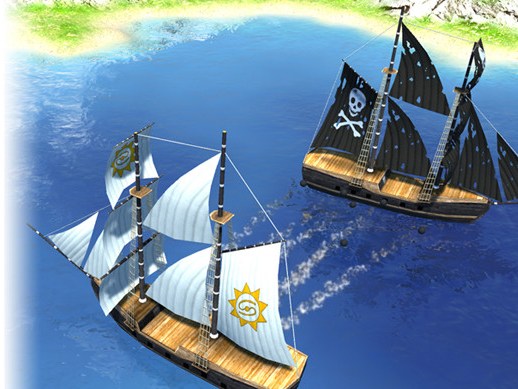 
My second purchase from the Asset Store, which I bought to get an idea of how to go about things. This is a project again by Ngui creator Aren Mook, for people to use as a basis for their own ship based game. The example is actually very good and covered quite a few bases included weapons, damage, resources, movement and various other things. Sadly it was made before Ngui so the interface isn't made using it, which is a really shame as given my Ngui frustrations I could have done with a live example of how all the interface links up in a full game environment.

This is also the Basis of there game which is in open alpha now, so make sure you hop along to check it out right here on ModDB - Windward

Obviously I'm probably going to need more tools as time goes on to help me get over the line. I'm done for now as I can't afford it. But it doesn't mean to say I haven't got my eye on stuff and am always looking for cool stuff to add to my collection.
If of course any of you guys have any feedback on any of the below, please let me know your thoughts.....

There are a few weather effects and systems available on the asset store and I will be purchasing at least one of them. I'm also on the lookout for a good looking cloud system.

The single biggest worry I still have about my project as Unity is famously weak for water. The community ocean project has been stagnant for a few years and thus does not work with Unity 3.5 or above. Obviously I want proper waves as the Atlantic is hardly a calm ocean; Captains were killed on the bridges of their ships due to the furious storms that kicked up in the Atlantic. I have my eye on Triton Ocean & 3d Water, but with a £350 price tag that's a lot of dough!....especially since I'm still saving for Unity Pro....ive also had a look at the famous Tessendorf Paper..bit over my head that one ;).

This completes the round up the tools im using to create Battle of the Atlantic. I hope you have found it informative.