I added 4th race in Gravity mod. Here is short description for 4th race's units and buildings. In map editor all of them are placable for all races, as you can see lower: 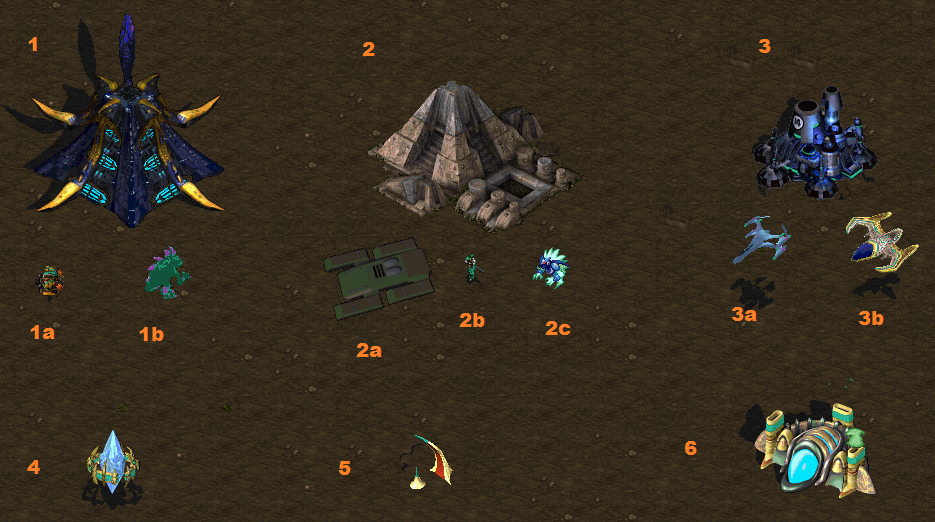 Buildings:
1) Independendent Command Center, automaticaly produces 1a and 1b;
2) Xel'Naga Altar of War, automaticaly produces 2a, 2b, and 2c;
3) Independent Starport, hiring 3a and 3b;
All these XN buildings produces units automaticaly, when player has enough psi and resources. He cant control this process for a while;
4) Protoss pylon - used by both protoss and Xel'Naga;
5) Phase Turret - same as Photon Cannon, but much stronger, It is only Xel'Naga building, that must be placed near pylon;
6) Protoss Assimilator - protoss building used by 4th race.

Units:
1a) Mining drone - 50 ore; worker, almost same as probe;
1b) Xel'Naga Bioweapon - 75 ore (autohiring when 250+ ore); Every time it kills any enemy unit It spawns a copy of itself. Strong against terran infantry, and most zerg units. Weak against terran vehicles and protoss units;

3a) Xel'Naga Duelist - 350 ore and 200 gas; Very weak air unit, detector, with huge weapon's range; It has 108 shields, and 12 hit points; but when shield has gone and battale seem like over - it actualy only begins! Strong against most air units, weak against protoss aircrafts, valkires;