Notes on the 1.26 release of gundam RTS. This release has been over a year in the making and takes gundam to a whole NEW level of visual quality.

After near a year in waiting Gundam 1.26 is here! As always there has been a large amount internal code work and improvements but none of that is really interesting to most of you. What is important is that there are MANY MANY new models, a few new maps massive improvements to the visuals over all and in general the same evolving and growing gameplay that you guys have come to expect as I continue towards are more complete reflection of the Universal century world!
A lot of the note here will be on visual improvements as those are ones readily visible and observable but I do not want those of you new to gundam rts to think I am only focused on visuals. It is important to note that this project will be reaching the 6 year mark this December and much of the work has been gameplay.
Some of you may also wonder why it feels very sandbox, this is because I have large sweeping plans for research trees but before I add the research trees, I need enough units to make branches viable. So forgive the giant pile of available units as this is merely a growing pain.
Additions to the game system:
---------------------------------------------------------------------------
armor and weapon classes!

UC Gundam has a very large amount of mechs and determining what one mech does well versus another is a hard thing to tell at a glance. In order to add some consistency to the weapon damages and armor soak I sat down and put together a weapon and armor class system. This is both color coded and uses names to tell you what is good at damaging what.
New spawner AI!
I have added a new spawner so you can now merely choose your desired difficulty and it's faction is the faction to play against, it will auto start as federation if you just run gundam via spring.exe and it now has very different waves than before! I recommend starting on easy.
New unit abilities!

When a magella tank dies, it's top will spawn as a new unit!
The juagg has a new ability called barrage which will fire all missile tubes at once! 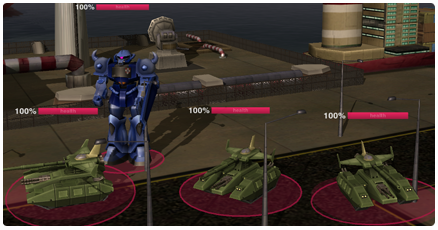 Eventually I wish to remove all team color from units leaving only buildings with team color. This is because I wish to reflect the canon colors of suits. To this end I have added the team colored "platters" and health bars. I got the idea playing a lot of battleforge. Buildings all have square ground platters where units have round ones.
New thrust effects(will not show up on some older video cards

Using the LUPS(Lua particle system) I have added ribbons and thrust/heat distortion to the aircraft thrust effects. This system will probably see heavier usage in the future but for now is just utilized on flying units.
New UI using the chilli framework

This is a work in progress but works at the basic functional level. In the future I intend on refining it but first I want to get it all working out.
New unit info boxes 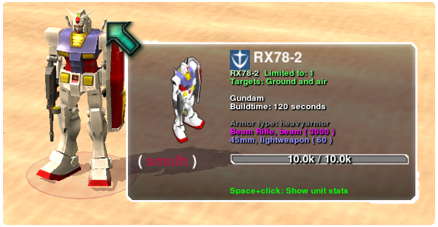 You can now see color coded, the resources required by the unit, it's armor class, it's hp, a small pic of it AND it's weapon with color coding for damage type!
Note the cost is not here because this not the build menu entry and I felt that it should only show in the build menu 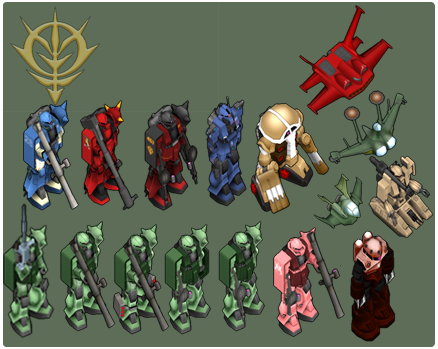 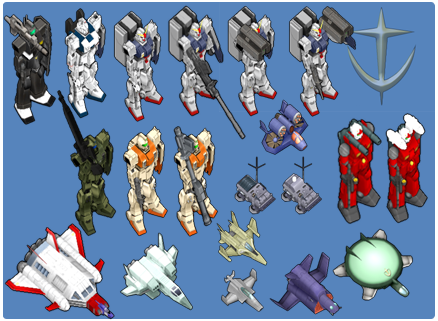 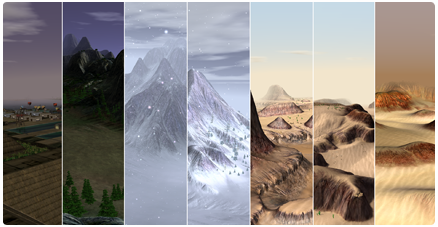 The maps have all been reworked to use the now available SSMF which gives me the ability to detail splatting! What does this mean in gamer terms? The maps are more detailed when you are at ground level. It gives me finer control of the game visuals with regards to textural data on the maps. This extra detail is only visible for those of you with shadows on, if you already have shadows enabled the performance hit is very very little.
I have tried to take in all of the feedback you guys have given me over the past year and hope that I have made maps that you guys will enjoy. However, I want you to continue giving feedback and asking for things as I will always be pushing to make gundam better and better. This includes the official maps
New features courtesy of the 0AD team.

Special thanks:
CarRepairer: base code for: Chat box, minimap, infoboxes
TheFatController: Improved chickens lua spawner.
Zero K team: Chilli UI and several base Chilli widgets, LUPS
Zwzsg: New menu, mission system, help with the team platter shapes
There are no doubt others I am forgetting but I am tired this release it taking a lot to get out. If I have missed you, I am sorry.

Smoth your are amazing love it :D