Here’s XYDONIA's new and improved alpha demo! ALPHA FEATURES - Old-school arcade style 2D graphics, resolution and palette are faithful to the hardware specs of the time (similar to Neo Geo/mid-'90s titles) - Three playable characters (Blade / Bull / Yoko) - Two stages (00 and 1B) - CRT emulation shader, togglable in the options menu - Two player Co-op - Boss encounters for both stages (WIP) - The new 3-weapon system - A taste of the new scoring/medal/ranking system - "Star Fox-like" dialogue between characters - Improved assets and interface - Full YM2151+Sega PCM soundtrack - XInput (Xbox 360 controller) and keyboard controls only, no rebindable keys ATM, but they will be added in future revisions Being an alpha, it’s still a bit rough around the edges and some bugs could be encountered, however it should give you an idea of how the game has progressed until now and keep you busy for a while! You can reset the game by pressing R, if anything weird happens! 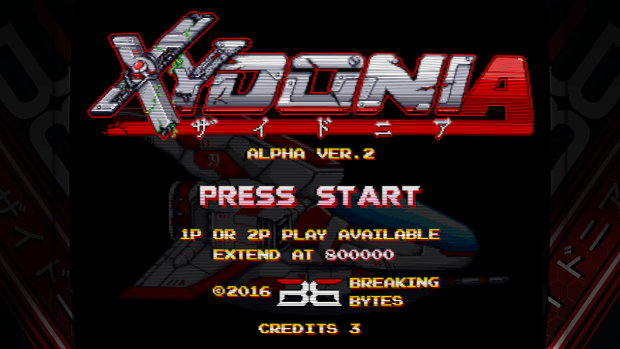