REQUIRES GZDOOM 4.5.0 Replaces all weapons, enemies and items with Star Wars themed assets. Gameplay is changed quite a lot, but attempts to keep some of the balance of Doom. Most projectiles are 3d models of Star Wars blaster effects. Infighting is also rare and usually only happens between imperials, aliens and bounty hunters (they won't attack their own team). The Icon of Sin is also replaced with a more traditional boss enemy, Emperor Palpatine. You can play as Kyle Katarn or Mara Jade and find lightsabers and unlock force powers, or you can start off as a Jedi. You can also go without the force and play as a rebel trooper or smuggler, each with their own starting weapons, or even go adventurous as the Mandalorian armed with a wrist launcher that boasts several different abilities.

CHANGES FROM LAST VERSION
-Update to textures pack (separate download)
-Update to props pack
-Two new classes have been added: The Rebel Smuggler and the Mandalorian. Try them out! The Mandalorian has a wrist launcher with a selection of powers, similar to the Jedi but the powers run off batteries, which are found in backpacks, lightsabers, gauntlets and dropped by various foes such as engineers and droids
-New weapon: Accelerated Charged Particle Scatter Gun (AKA Trandoshan Shotgun), takes the spot of the flechette launcher with the SSG, the flechette launcher is now an upgraded weapon for the scatter gun. Flechette launcher is rarely dropped by jet troopers and zero gravity troopers
-New upgraded weapon: TL-50 Heavy Repeater from Jedi Outcast/EA Battlefront, upgrades the DF1 Repeater gun. The gyrojet is no longer used for now.
-New firing animations for most of the weapons (bryar pistol, e-11, repeater, fusion cutter and concussion rifle by Dzierzan)
-Ion Blaster has been renamed to the "CA-87 Ion Blaster", alt-fire is now a shotgun like blast similar to how it functions in the new Battlefront series, the DEMP pulses are now exclusive to it's rarer and stronger counterpart the DEMP2 Ion Carbine
-CC-VI Cryo Projector has replaced the Goob Gun. Based off the CC-V Cryo Projector from Star Wars Galaxies. It deals ice damage and freezes enemies on death
-Jedi MindTrick now enables infighting on most enemies
-Ammo amount for pickup items has been reduced
-Weapon recoil screen shake has been reduced for most weapons
-Attacking behaviour and projectile accuracy have been adjusted for most enemies, officers are still accurate but don't fire as often, and most rifle troopers now have a random
chance to fire again each time they make a shot
-New sprite for metal bolt clip and power cells
-New ending cast call made for Doom 2 endings featuring Star Wars enemies
-New optional patches, including a "Dark Forces" patch that turns the mod into a "lighter version" which features mainly the Dark Forces enemies and weapons 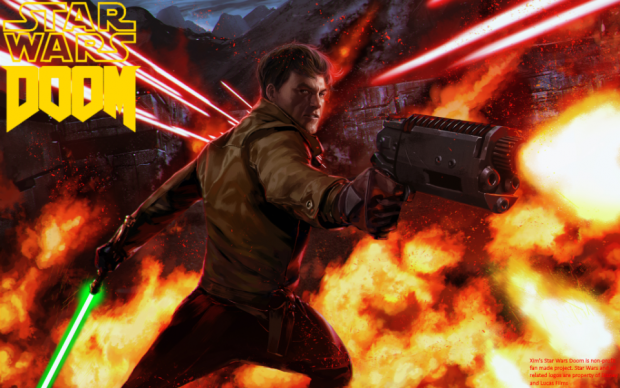