You will need EDGE 1.35 or later (edge.sourceforge.net) and a Doom 2 IWAD. Everything else is included in the package. The mod received a complete overhaul from the ground up, now being much more accurate and faithful to the Wolfenstein 3D and Spear of Destiny Games. Among new eye and ear candy are extended and improved enemy frames and Spear of Destiny exclusive music which was previously missing. Most other changes are under-the-hood type stuff, improved mechanics and behavior. For those who have no idea what this is: it is an extensive remake/update of Laz Rojas' WolfenDoom scenarios: Original Missions, Nocturnal Missions and Spear of Destiny featuring hi-res wall and sprites, crisper sound effects and re-recorded Wolfenstein 3D music (with real instruments) among other things, by CeeJay. 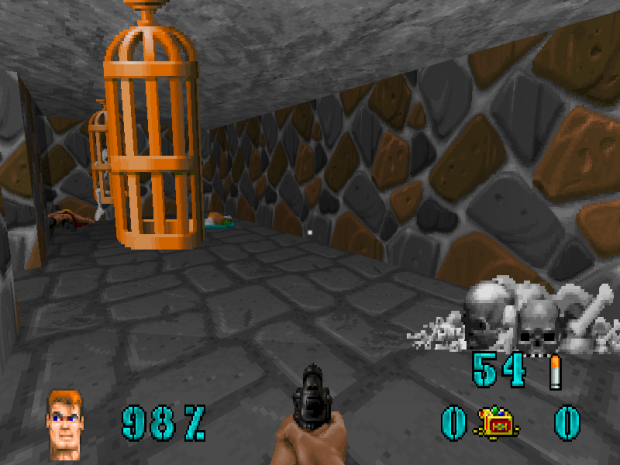 how would you setup a controller for this?

I was looking for a perfect port of Wolf3d, which would have some nice graphics enhancements, with the origial Wolf3d feel and gameplay, and i think i've found it. :D
You did some really great work with WolfenDOOM. Its like all, which was good in the console\MAC versions of wolf3d, was mixed together. The music, sounds, fast paste and challenging gameplay, enhanced visuals, is just astounding. Thank you very much for this, it should be called "Perfect WOLF" :D
BTW, There are also two mission packs for Spear Of Desinty called "Return to Danger" and "Ultimate Chalenge", could you also include them in the next relase ??