WARNING! We have encountered a major bug in this version. When getting Presence level 3, it appears the passive disciplines no longer work. Also, Auspex must be activated before entering a new map in order to benefit from the Inspection buff. We are looking into releasing a hotfix for both but until that time, feel free to play it but avoid using Presence 3 or higher. We apologize for this oversight.

This is the Full Version and only requires Vampire: The Masquerade - Bloodlines. Install over a clean copy of VTMB.

Below are the list of features in VTM: The Final Nights 1.4.

NOTE: All System Charts such as the Weapon stats, Frenzy Timer, Haggle System, Blood Doll %, and Masquerade Violations can be found at our website:
Camarillaedition.darkbb.com 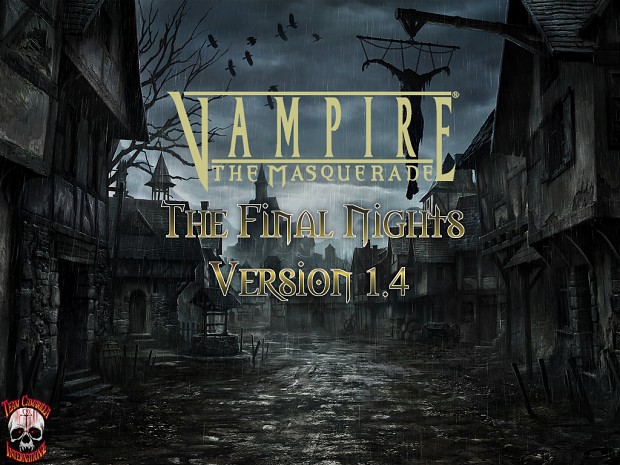 Getting it now, bro!

The wait is over! :-P
Thank you so much and your team for all your hard work! Just need to uninstall Unofficial patch first then install this mod and I'm ready to go! XD

Sweetness! Have fun and go get ya some blood! :)

Hey Zeromorph I have some questions what level of inspection do you need to see tattoo parlor key ? I have five level and no key. Also I got Masquerade Violation but no email from black about it. But I got introduction email from her when I started the game.

The tattoo parlor key in Carson's apartment? That's a quest item so you don't need inspection to see it. It should be on his TV. That's the key you're talking about right?

Where did you get the violation?

Yes I am talking about that key. It is not on the TV. Also I got violation by healing heather but no email about it from black.

Sorry I make a mistake about key. But I was right about violation and no second email from black.

The only way this could've happened is if you got the violation from Heather and recovered the werewolf blood without ever leaving the clinic. The violation and redemption would cancel each other out so you wouldn't get the email. Is that what happened?

TBM playing in the asylum. NICE!

Haha nice! I love Birthday Massacre so much!

Read the game manual, it explains what to do.

how to unpack it?

It's an .exe, just double click it and the installer will run. Find your install path and that's it. Look in the game manual for further details.

how do you unpack this?

Yaay! Someone read the manual! :)

It should be giving you +2 points in all of your physical attributes. Sounds like a strange bug I've never seen before.

Akeem will leave his spot when the thugs show up, are you in the middle of Venus' quest?

Thanks,can't wait to play the final night. Had enjoyed and played the vtmb countless times.

It's a wonderful mod however there's a slight bug with Presence 3 or higher, as stated above.

I get "you don't have a valid reply when talking to the prince after killing the Sabbat. Also i don't always get the quest to get the photo to blackmail Gary.

You need to have Silvia Black unlocked in order to get the quest to get the photo from the reporter. This has to be done before reaching Hollywood, or the reporter will turn in the photo.

As for "unvalid reply", after killing the Sabbat, you walk in, speak with LaCroix, and what does he say? I can track the line down if you tell me which line he speaks.

Thanks Zer0morp for the tip, I have loaded a saved game and got back to get the Silvia Black quest, also the problem with the prince was solved. Thanks for your advise.

No problem man, have fun playing! :)

Yes, however there is a game breaking bug with Presence right now that if you get Presence 3 or higher, your other passive disciplines stop working. Also, Auspex is not working as intended but it isn't game breaking. It's your choice on if you want to play 1.4 with the bugs, or go back to 1.3.

Currently we have our best python programmer; Childe of Malkav, working on the issue, and he's making good progress. We should have all of these bugs working out in the next couple weeks, hopefully. When it's fixed and been tested, we'll be releasing a hotfix for 1.4.

Game looks interesting, this mod as well, but GoG version comes with the unofficial patch, is that a problem for this, if so would there be a way to correct it?

Can we expect new content in the future? Thanks!

It sais not to use the official patch but.. with just this installed I'm getting the -15mb memory error is there a fix or do I have to run it in compatibility mode?

Love this mod so far, it works flawless (except 1 not-gamebreaking thing and 1 absolutely gamebreaking thing, i talk about that later in this post) and - which makes the game so much more enjoyable and which appeared in Antitribu and Clan Quest just like in the original game - without any crashes until the point I am now.

Currently playing as Setite, love it so far, couldn't live without "domination". Rarely used the snakeform, sandstorm and heart because the snakeform is just unneccessary later, sandstorm just isn't my style and thus worthless and the heart... nah thanks, it may be a strong power but the downs are too risky for me. Using a lot of potence and presence with the artifact that makes your unarmed attacks lethal (or that lethal little katana if I feel like it). Besides the few flaws I like the clan.

Well. Some critizised that this mod isn't what it claims to be - something not alike bloodlines, which I have to admit, is wrong. There may be some cool stuff like bank account hacking, which I loved, even with the humanity penalty, some new quests, Akeem, who was very nice and authentic as far as I can tell that and yeah... some other stuff. But it isn't different from Bloodlines storywise or something like that but it is in my opinion significantly better than Clan Quest or Antitribu (Clan Quest was just boring and Antitribu bugged like hell)

Also, the game for me was pretty "normal"... difficulty-wise. Not too hard I think.

This mod has by far more ups than downs, but now the bugs that are... bugging me.

1. Not directly gamebreaking: The skyline apartments which just get bugged. The console mainly says something about the elevator not working properly and restarting the game at least solved it temporarily, but like in any other mod by now, the apartments are just broken. Curious things instead of doorknobs and similar stuff. Was gamebreaking (well... "side"gamebreaking at least, console helped a lot via noclip) in other mods and is still present in this one. Very ugly bug. The mod would run a bit more smooth if this wouldn't happen. At least I could pass the elevator (whose buttons are also bugged/a little off). If I wanted to use my com, I needed to restart.

2. Absolutely gamebreaking: After defeating the Sabbat at the hallowbrook hotel, if I report to LaCroix, after the line where he just insults his gorilla because I am way better (gharhar) my character just says "I have no valid reply". If I use that "answer" the quest is solved and the story doesn't progress. Dunno if it has anything to do with the elevator because that one has - at least the console says so - problems too. I tried the things mentioned in the comment where someone stated the same problem, but nothing worked. I also tried talking to the "major characters" like Strauss, Jack and some others ... but the game just doesn't let me getting blown up with my prince. What a shame.

I hope you guys still work on it, I try another run with another character (probably Baali if I remember them correctly, the corrupting satanists) and tell if it happens too. Otherwise, very well made so far... I hope the VtMB-Modding community isn't dead, the mods have great potential.

ps: Would write an proper review, but I cannot seem to find a review-button in the section ment for it :>

Update to my last post: same issue with "No valid reply" as Baali.

The one Major thing that makes The Final Nights better than Bloodlines Antitribu? You have The Final Nights as an exe file, and not a rar or zip file, meaning I can install it like the unofficial patch and it's simple easy and guaranteed to work. Thank you for making such a fantastic Vampire mod.

There is a problem with the download it says there is an invalid file when I try to install it to the steam version.

Hi, i would want to know if this mod is compatible with the unofficial patches and if it is, what version?