Checksum ONVW after 2nd startup. Decisions were color coded to make them easier to sort through and the font for events was made easier to read. Mine RGOs now work differently than farm RGOs, they are capped at 5-30k worker size no matter the population of their province and there are province selector decisions that can increase the size of mines for a large cost. Regions that historically had high mining output but low populations can be accurately simulated with this new mining system. Employment at mines should also now go up as time goes on instead of down. Education and has also been revamped. The max base cap on clergy is 2% and is increased by 0.5% per school reform level, up to the previous max of 4%. An annual literacy decay mechanic was introduced at a rate of 0.1% per every 10% literacy in a POP rounded up, so a POP with 45% literacy will lose 0.5% at the start of the year and a POP with 99% literacy will lose 1%.

Delete the entire "Victoria Universalis" folder in both "Program Files/Steam/steamapps/common/Victoria 2/mod" and "Documents/Paradox Interactive/Victoria II" directories before installing this file. 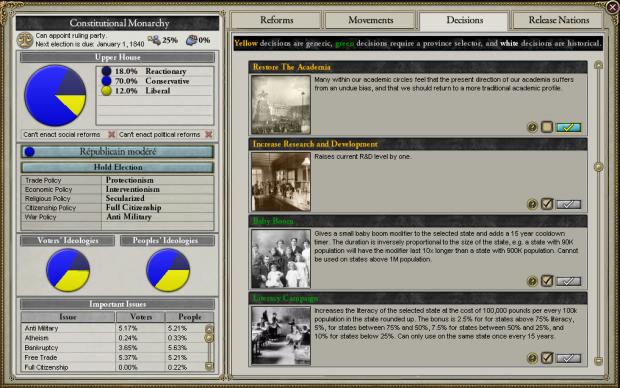