Supernations Mod Version 1.40 - Released 05/29/2021 Nearly half a year in the making, the latest major release of the Supernations mod has arrived! Embark on a brand new campaign as the United States of America and guide your nation through some of the most tumultuous events of the era. Form the North American Union and unite all of North America, becoming one of the greatest powers on the planet in the process. If you emerge successful, at the very end there may be a surprise awaiting your nation.

Guide the United States through some of the most defining events in its history, including but not limited to:

And a whole lot more! Each of the periods mentioned above has gone through its own expansion, addition, or revamping. Attempt to form the North American Union as the United States, and for the truly successful players, you may even endeavor to form a much Greater American Union!

Version 1.40 - "The Republic" update adds an additional 114 events to the game and dozens of additional decisions! Take your United States game to the next level!

In addition to the updates regarding the United States, some minor bug fixes were performed on the New Roman Empire Campaign, as well as some additions to Spain being able to form Iberia!

Have fun, and be sure to leave plenty of feedback!

And! If you're curious about the mod and wish to watch my playthroughs and updates, be sure to visit my youtube channel, or even join the Supernations discord! 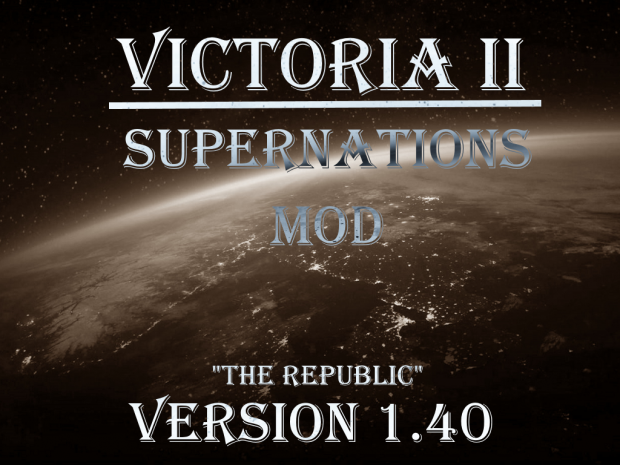